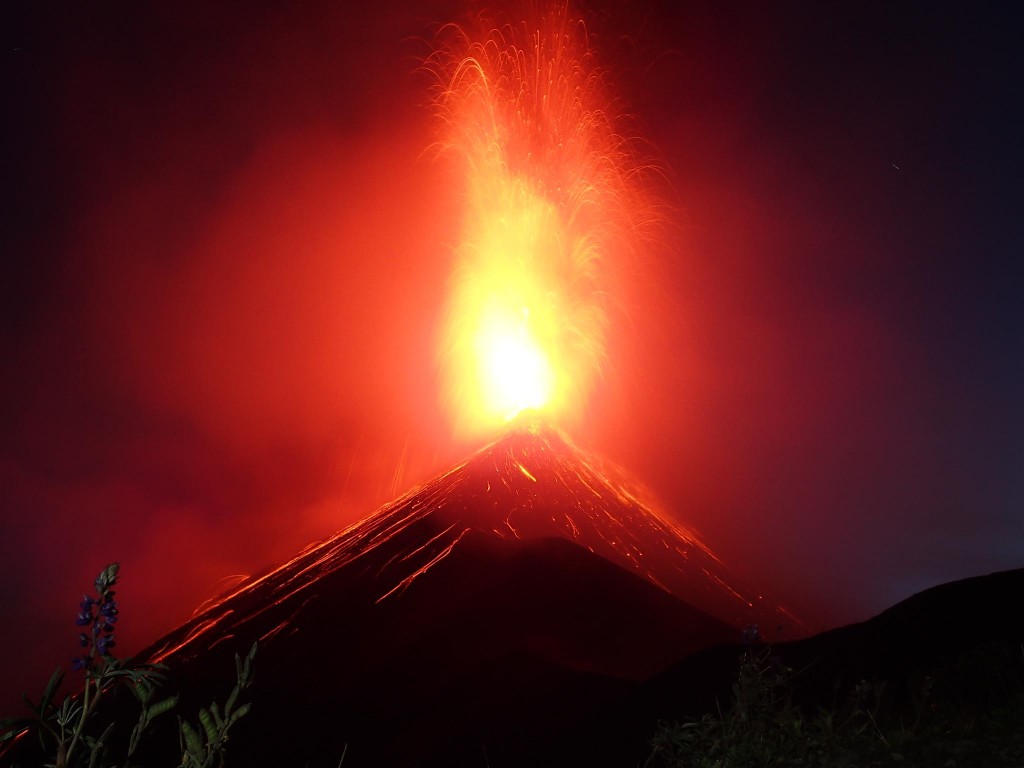 This began as a simple journey to claim a tarpon of my own.  What it became was a solitary journey through Florida, Belize, and, finally, Guatemala.  At the end of two weeks of travel, I found myself standing on an erupting volcano.  One thing simply led to another, and I owe it all to the tarpon.

Tarpon have taunted me on an annual basis since my first trip down to the Florida Keys with Ken.  So many trips down to Florida, so many tarpon spotted.  Their orange-tinged eye reflections have haunted me in the dead of night.  Hooked, but never for more than a fleeting instant.  A fish of my dreams, it was time to finish this chapter.

Returning from our latest foray down to the Keys, where all of about one hundred tarpon had taunted us from below a pier, I had a bone to pick.  Ken had long suggested Belize as a means to my tarpon end.  Ken is credited for most of this trip actually, for even when he is not present he is always a sound source of direction.

In booking my flight, I noticed I had the option for a cheap multi-day layover back in Florida.  Why not? 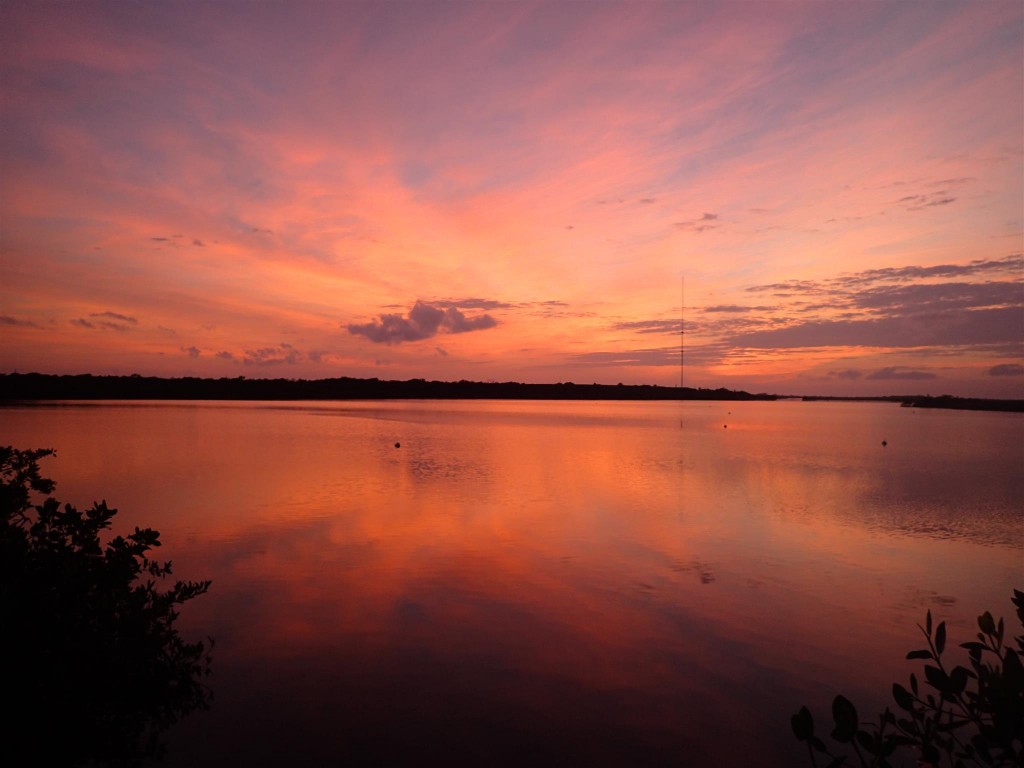 After landing in Miami and getting my wheels (and McDonald’s), first thing on the agenda was hitting a small spot at edge of the Everglades in search of marsh killifish and american flagfish.  Florida’s diversity has been a longstanding beacon to us species hunters and as much as I wanted to chase tarpon, the thrill of exploring new spots for new species never gets old.

The quick stop I had planned to make at Walmart to buy worms quickly turned into a wild worm chase as Walmart after Walmart failed to provide.  On a wrong turn, I so happened to come across an old familiar tackle shop we had visited years ago.  A great wrong turn! 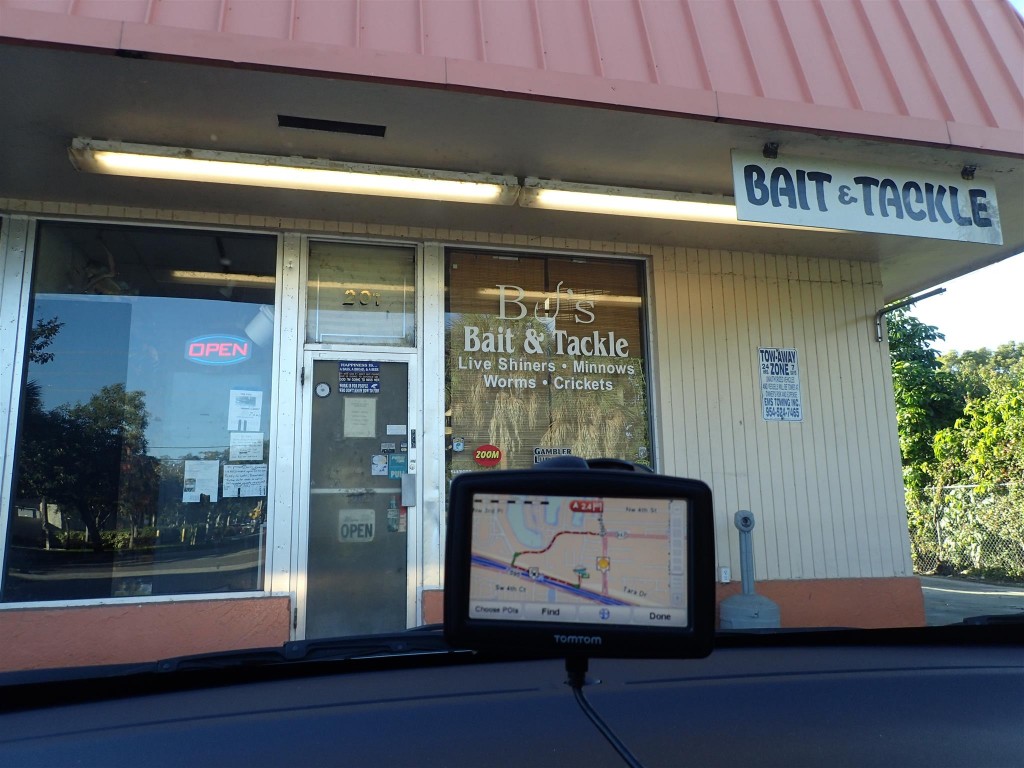 Cue the Alleluia music!  I never thought I’d be so happy to see… worms! 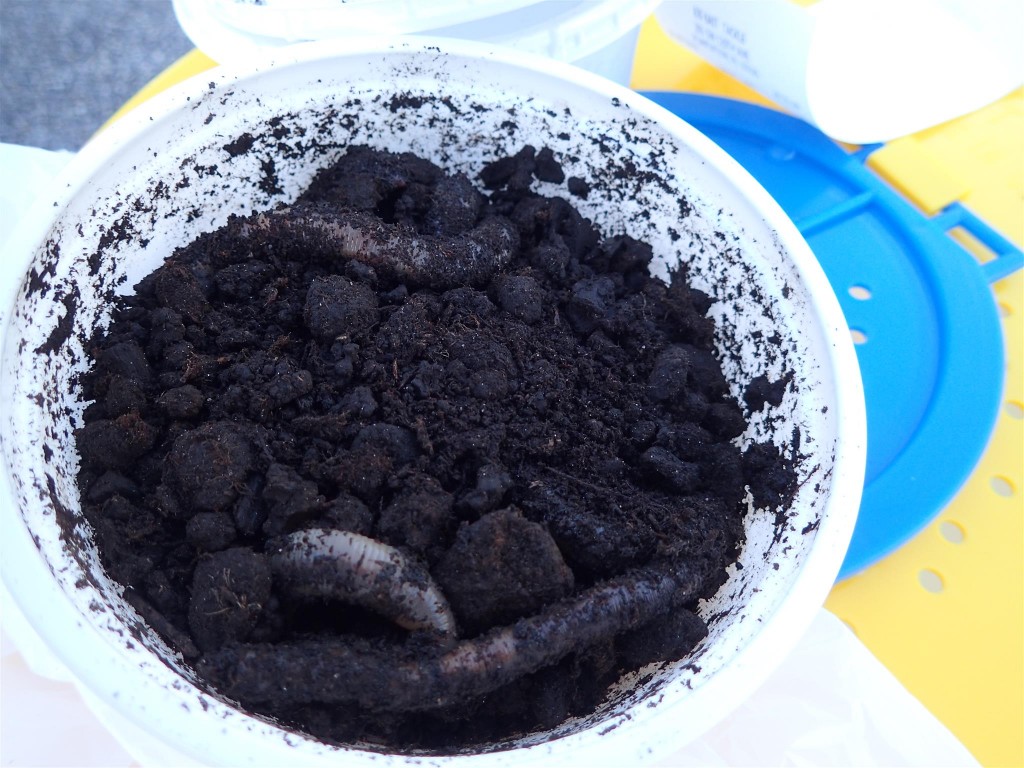 Worms acquired and sun lowering, I hit the spot but didn’t come across my targets.  I did manage a new and unexpected species of shiner. 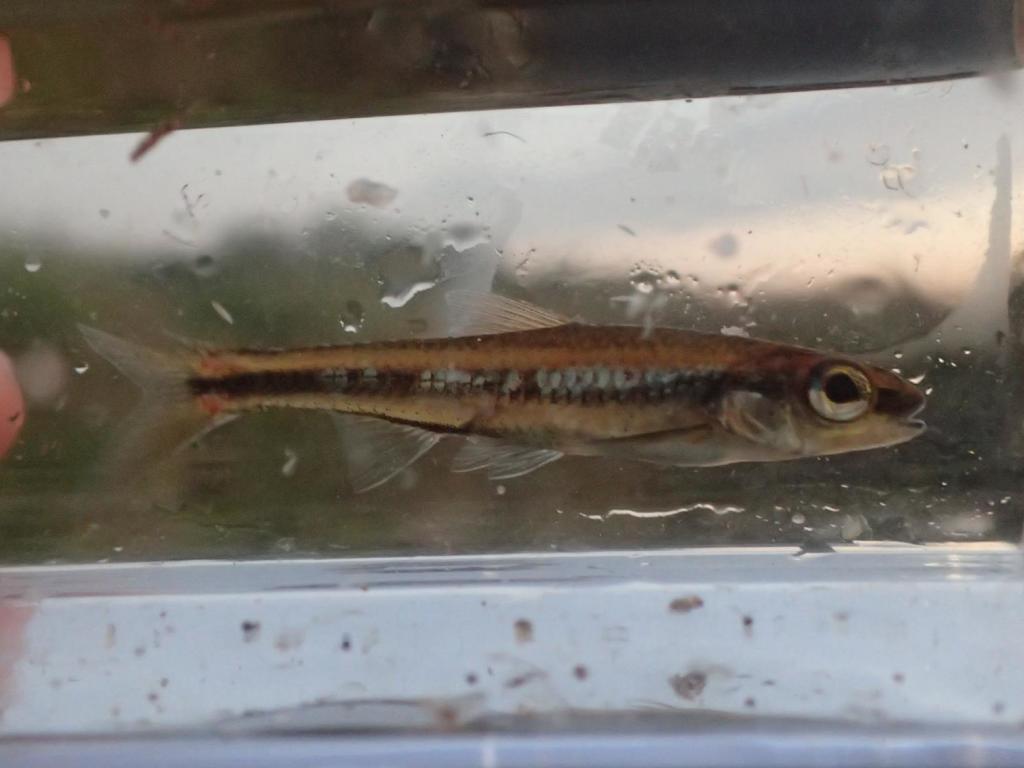 I caught a whole bunch of juvenile spotted tilapia and spotted what appeared to be seminole killifish. 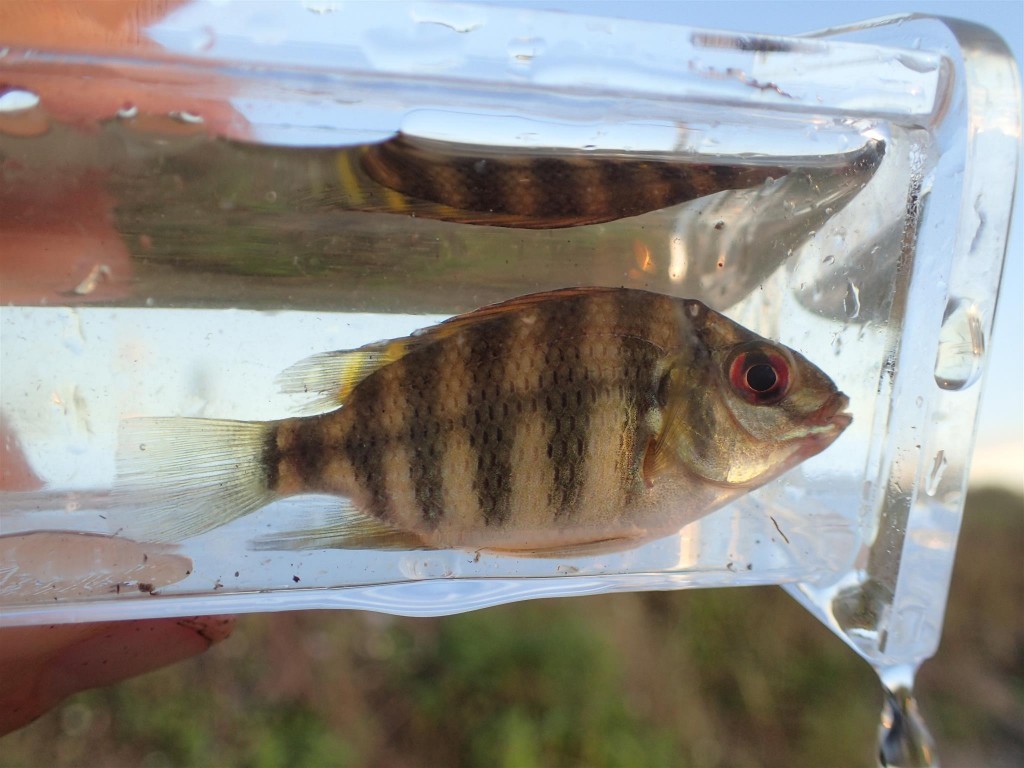 Perhaps returning to this spot with more light would be more productive. 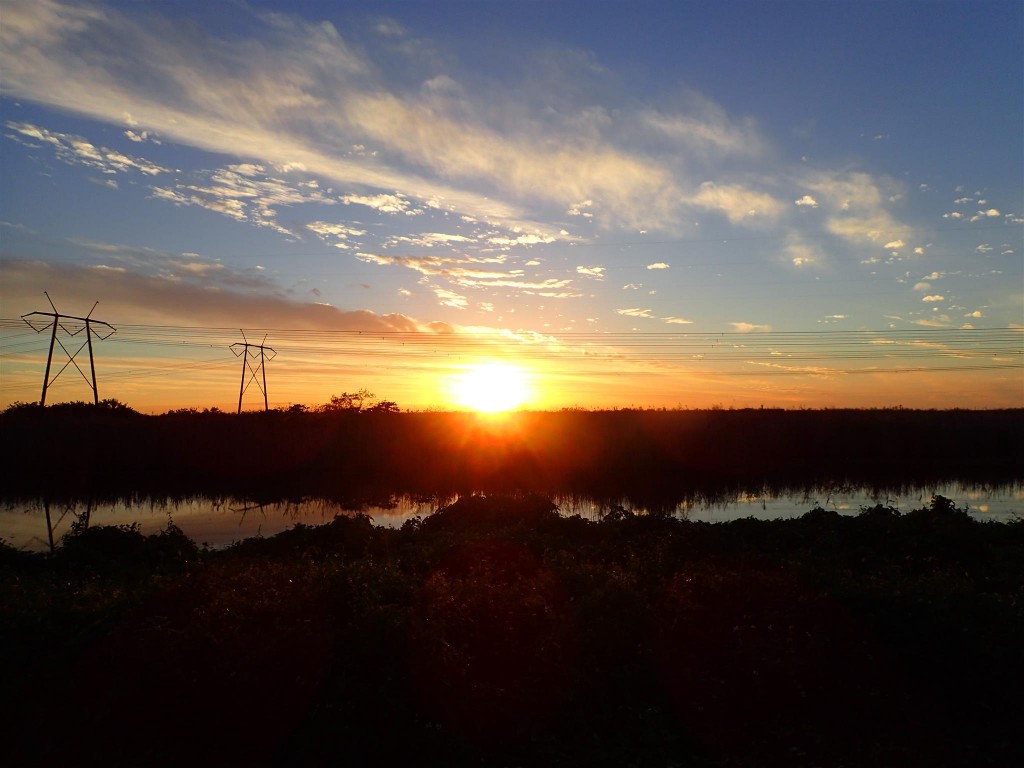 Light had run out and while I had planned to fish a nearby spot for cobra snakehead that evening it would seem I would need to try it in the dark.

Did snakeheads even hit in the dark?  This question would answer itself in time, but for now I thought not.  At the spot I spooked something with reflective eyes in the shallows, but that was it.  Baby gator perhaps?  It reminded me a one of those pesky tarpon.

I stopped by Bass Pro to stock up on miles of fluorocarbon and stacks of Owner hooks in preparation for the tarpon hunts that lay ahead.  They were all out of pier nets, but I luckily found one in another tackle shop as I drove south along what I now call the “highway of McDonald’s” where a McDonald’s is guaranteed to pop up every 7 minutes.   Can’t complain!

First on the docket was a visit to a popular marina to book a spot on their party boat a few days down the road.  Chatting with the overnight worker, he suggested a niche spot for me to try for tarpon.  After some great fishing banter, I was off.

This was a spot I had had fun catching jack crevalle in the past, but never had the distance casting I needed to present a bait to the tarpon.  At the worst, I’d be able to stock up on baits for sharks.  I tried unsuccessfully to present a live shrimp, as the current was pushing away from the tarpon’s holding area. 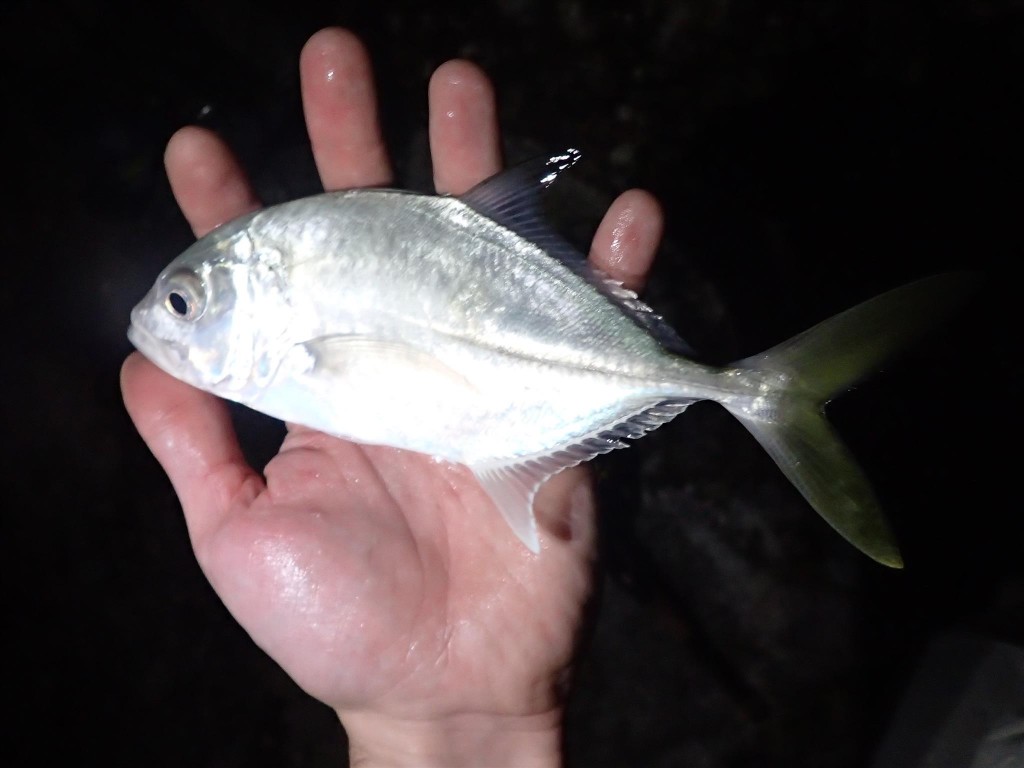 I decided to return  when the tide reversed and became incoming.  For now, I had another spot in mind to take advantage of the outgoing tide.  I found the odd tarpon but it was clear my timing was off.

As the tide turned I returned to my original spot and proceeded empty-handed.  I retreated to my rental car for much needed sleep.

The next day I had a charter booked to target sharks, but also wanted to do some DIY sharking at a spot that had been reported to be infested with blacktips as of late. I had a bit of time to check out the spot, but the tide was ripping and I failed at catching fresh bait. 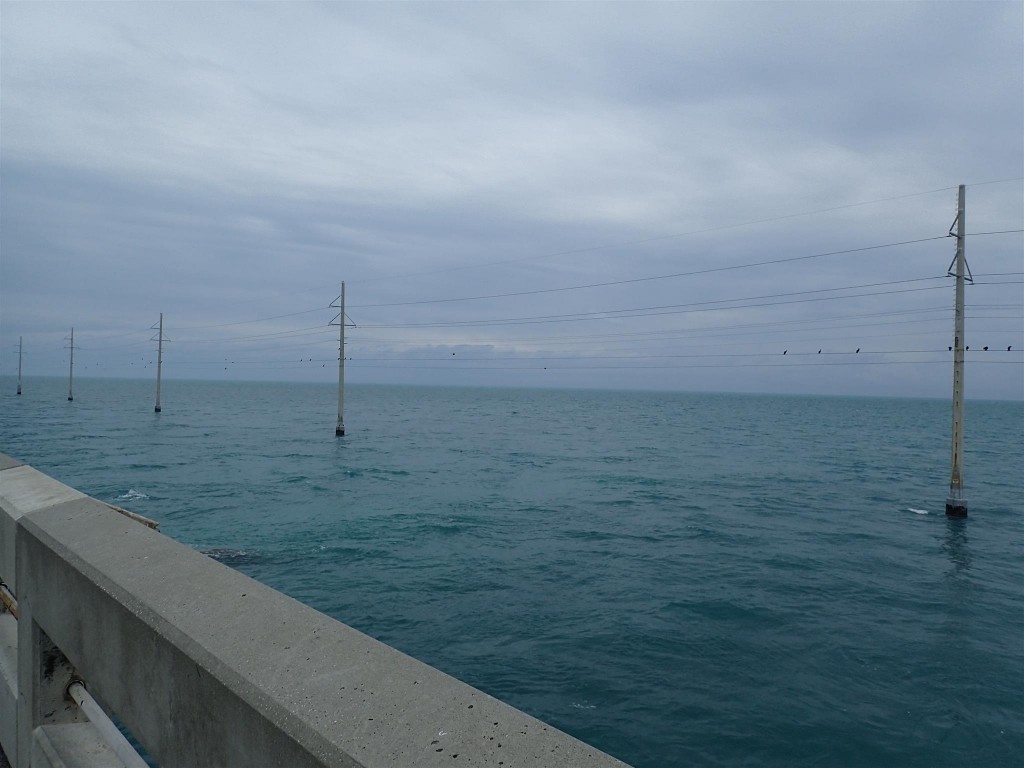 I sent out one of the jacks I had caught last night, but it remained untouched despite my thumbs up seal of approval. 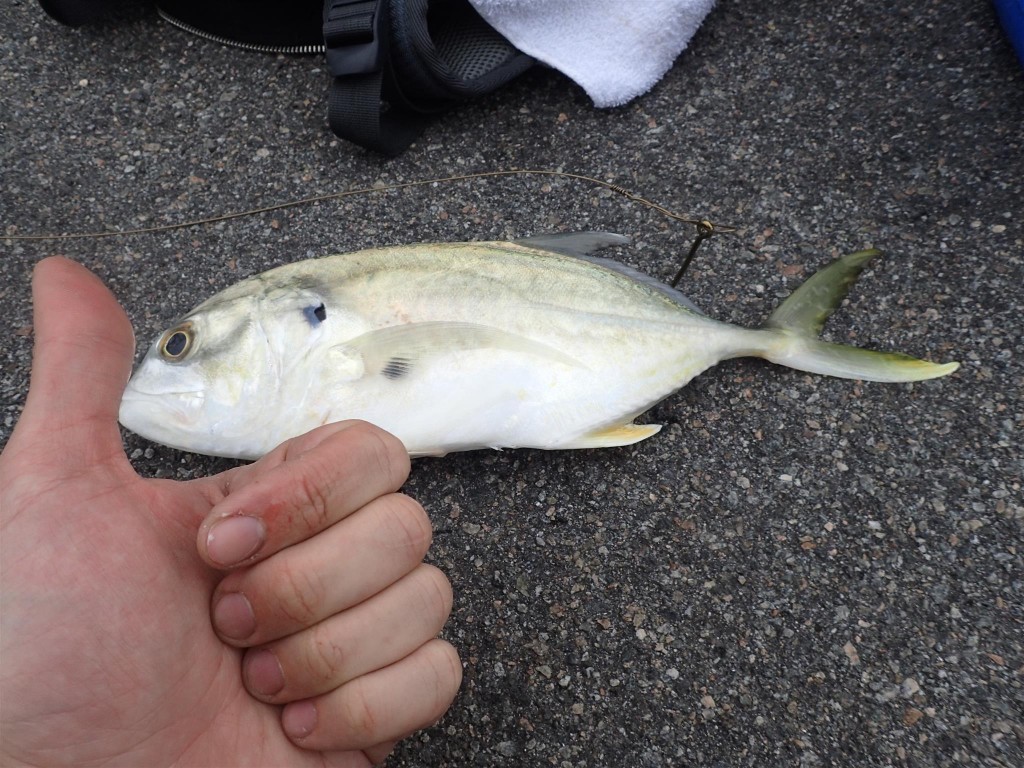 On the charter, we headed to a popular channel that receives wash of many of the area’s fish cleaning stations and so was a popular sharking destination.  On approach, one of the two other boats was hooked up.  We found a spot to anchor and the deckhand began unleashing what was the beginning of over 100lbs of chum behind the boat!  Now THAT was chumming.

The method here was to drift baits back into the chum line to the sharks below.  No static bottom fishing here, we were drifiting baits for shark much like we do for steelhead back home!  I thought that was pretty cool. 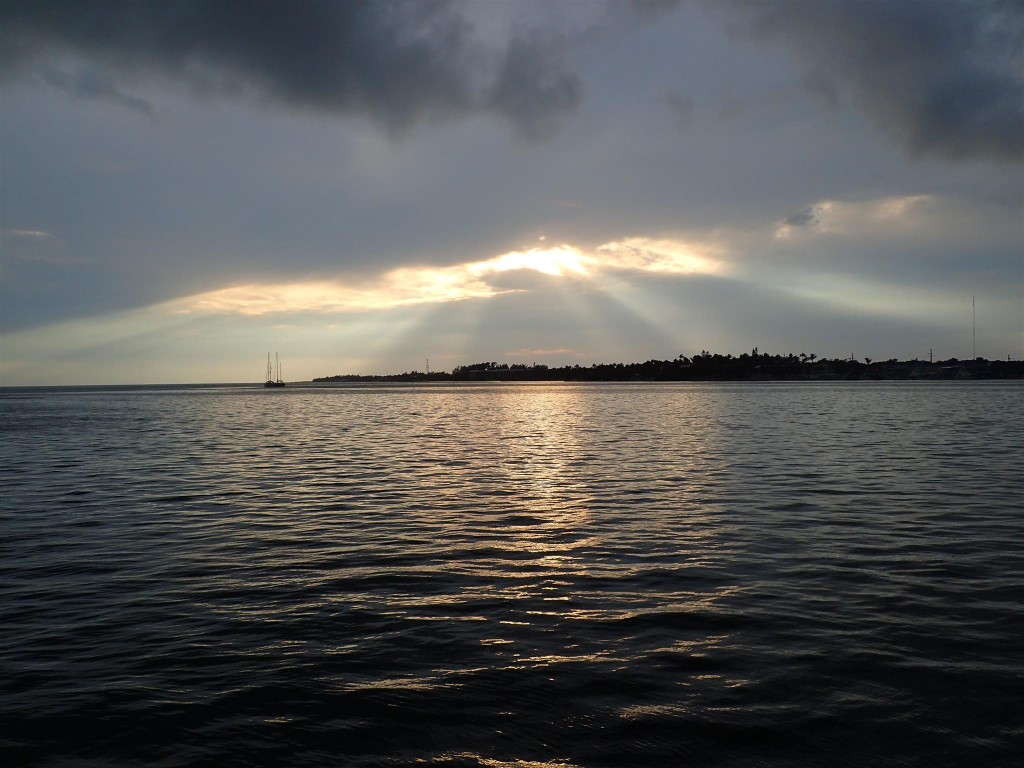 After an hour or so without bites the deckhand jigged up a yellow jack, cut its tail off, and rigged it for me. He said it would get bit “for sure”. Now, I’ve heard this before and have said it to myself about other baits countless times, so I brushed it off. 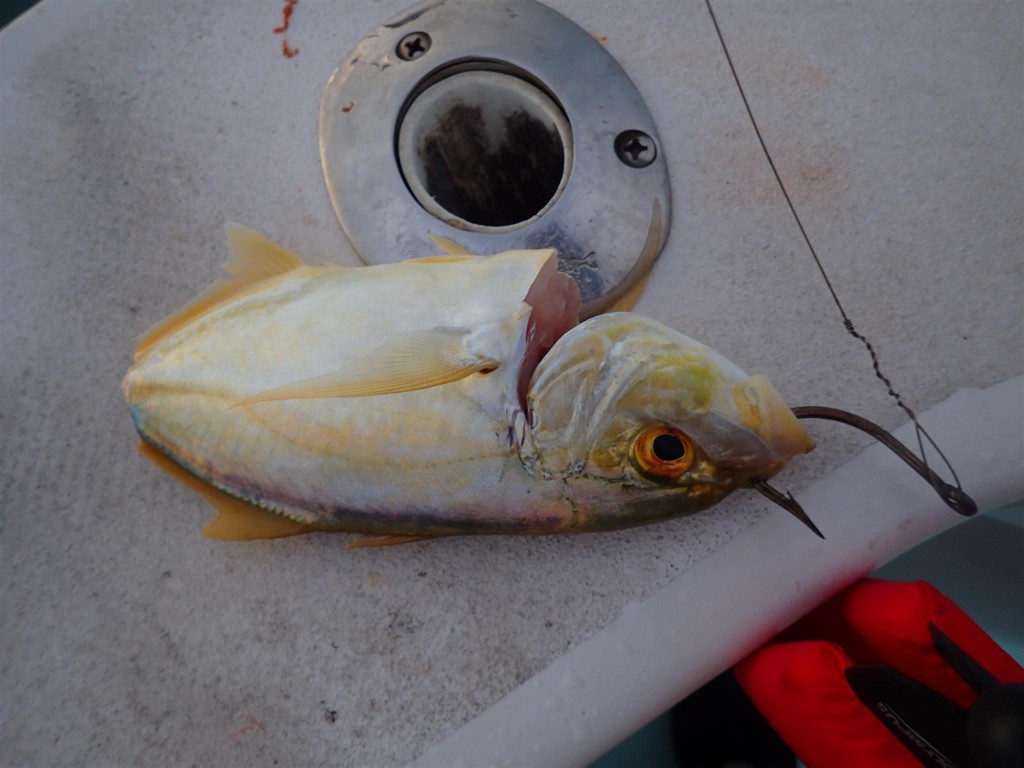 Not thirty seconds later, line was peeling off my reel yielding to an uncontrollable, unstoppable fish!  It headed straight into a mess of channel markers and my spool was almost empty.  I applied gradual pressure, but the line was sliced by much less than the 30lbs it was rated.  Why these guys were chasing shark in a snaggy channel with 30lb mainline was beyond me.  An hour or so later we had another fish bite off that was it.  No shark for me.  They had gone the way of the tarpon. 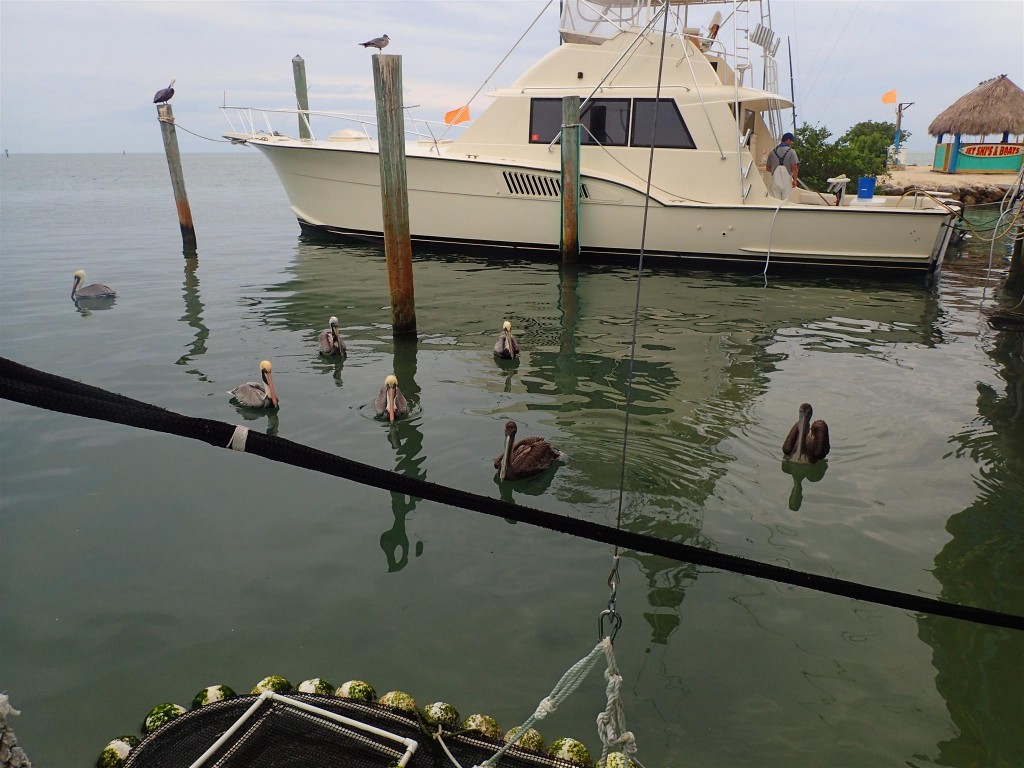 Nevertheless that charter was not all for naught, I plan to return to the spot one day with actual shark fishing tackle.  No 30lb line shenanigans.

I visited my new friend at the marina again and he was surprised I had not yet gotten my tarpon or shark.  He told me he had another spot in mind but I would need some fresh grunts or anything live for bait if I wanted a shark.

Off I went to a rocky spot I had wanted to revisit for the occasionally cruising eel, but quickly left after realizing I was way too tired to be jumping and balancing on rocks at this point.  I found a hermit crab to join in on my skunking. 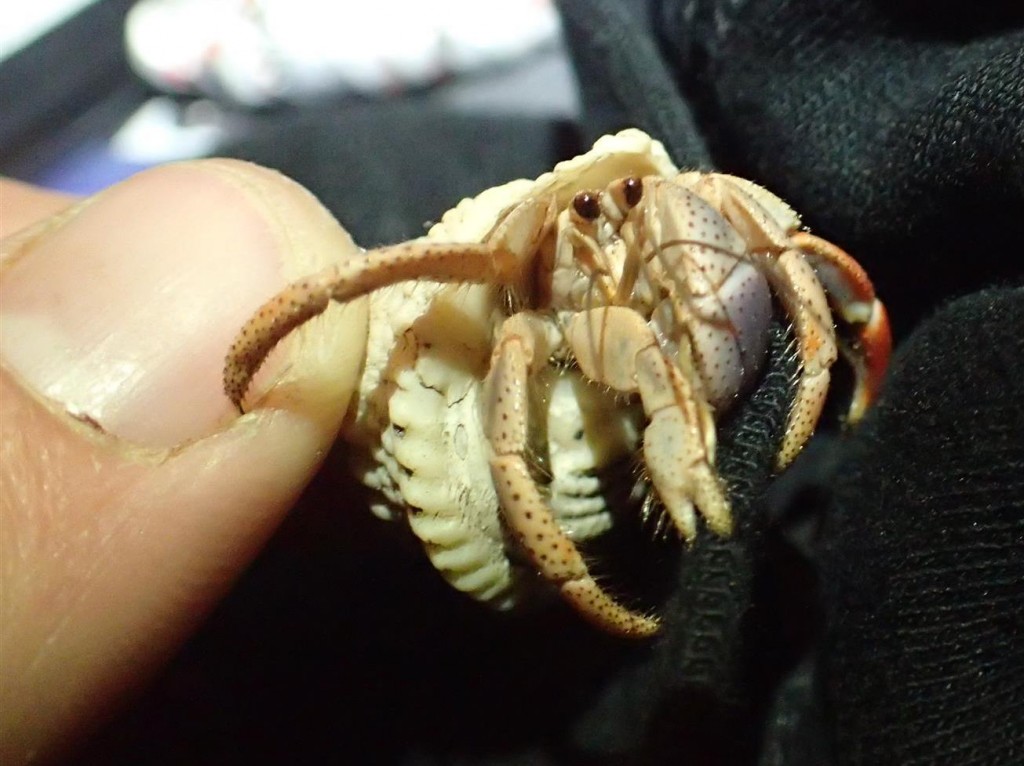 I went to another familiar spot for grunts and was enchanted to stay a while.  With the calm current and wind there were hundreds of tarpon around!

Every once a while the silence would be interrupted by the clapping of their violent surface feeding.  I tried for them again and again, fruitlessly.  Drifting live shrimp was not cutting it.  I even threw them some free ones without a hook or line and got a follow and rejection.

My friend’s new spot also had a pile of tarpon that again rejected everything I had.  No shark either.  The pattern continued, this was nothing new for me.  I got some sleep.

Tomorrow would prove to be a tad more exciting…