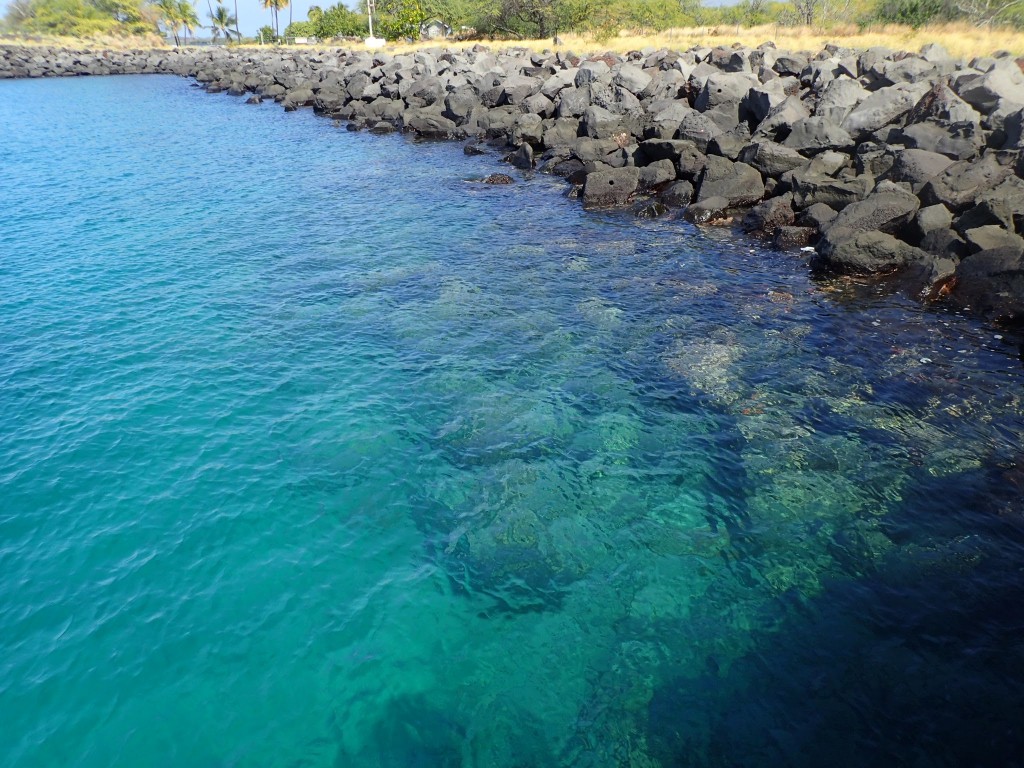 The next morning we fished a nearby harbour and I had a close call with a whitespotted filefish.   On a steep rocky face we spotted several raccoon and forceps butterflyfish, two targets we’d also barely seen on Oahu.  First, I was interrupted by a moorish idol. 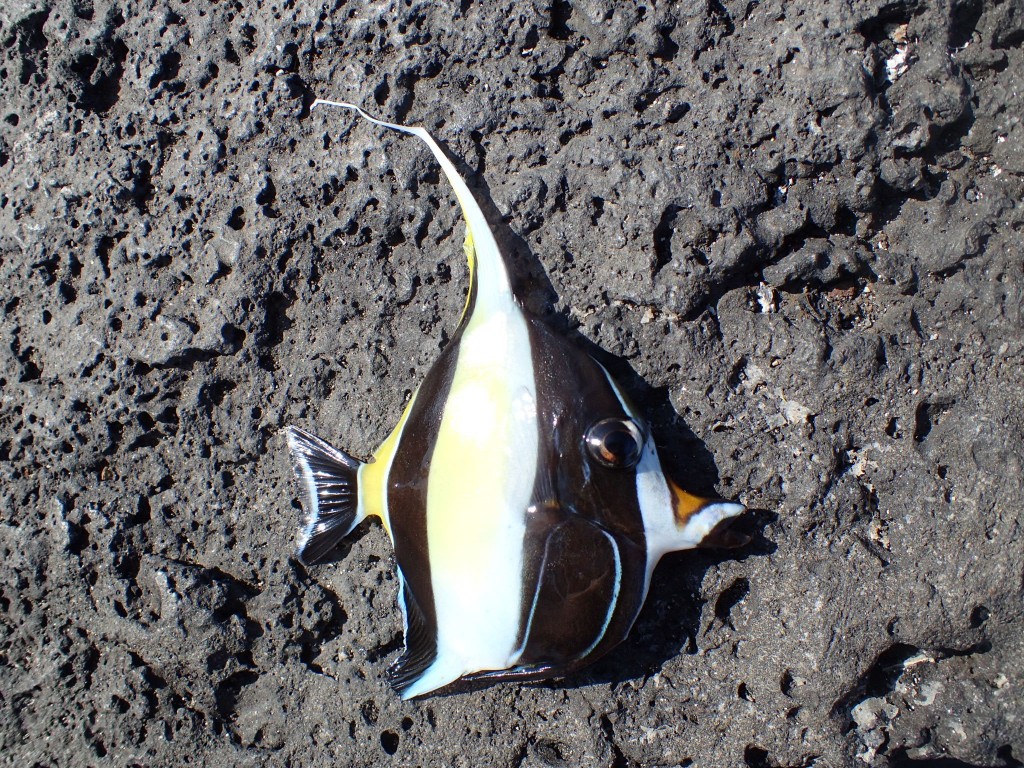 And then Ken and I doubled up!  If you had asked us a week ago we wouldn’t even have imagined that.  Move successful! 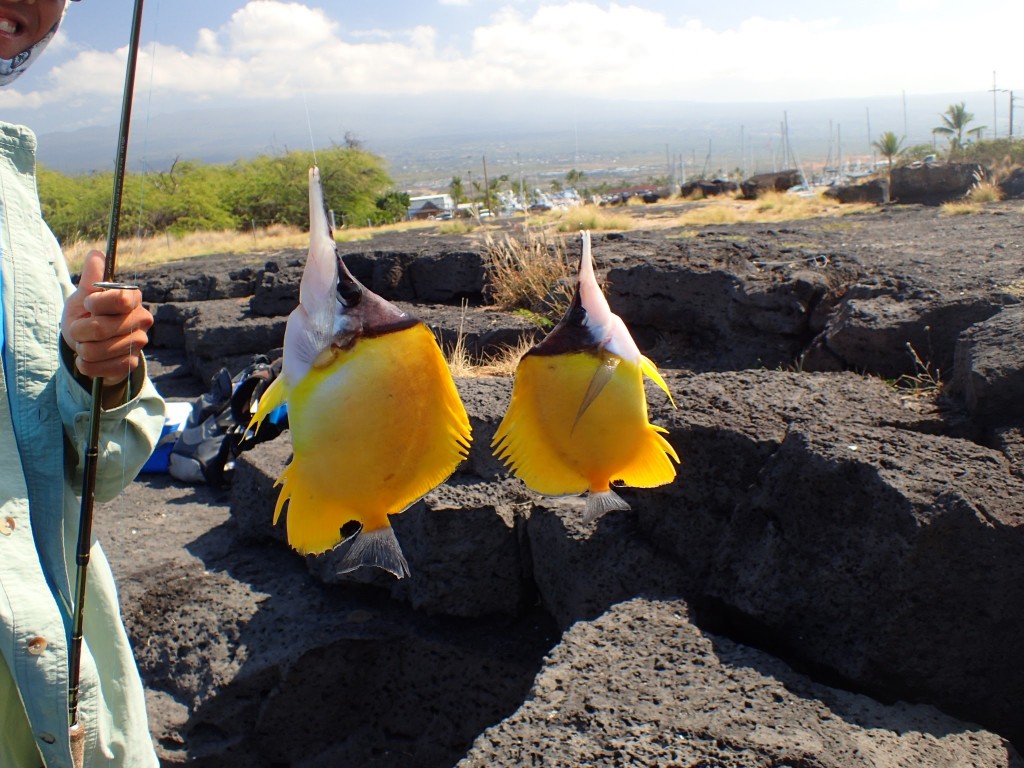 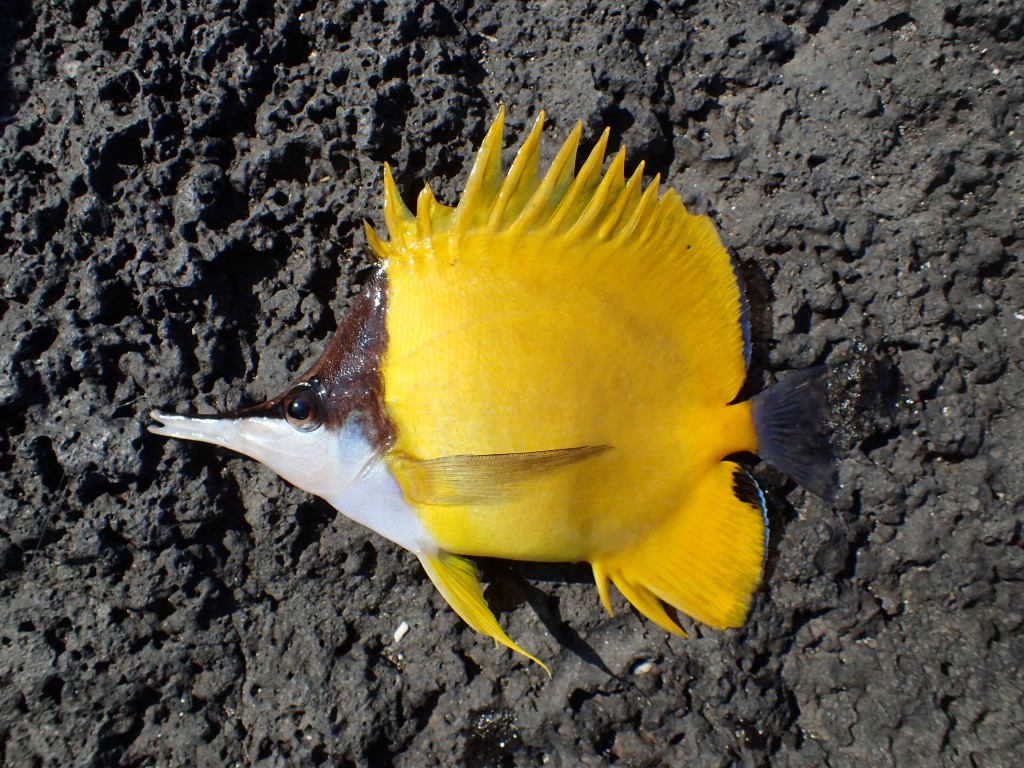 The few raccoon butterflyfish moved on, but we would soon find that a simple change of spots would ease our woes. 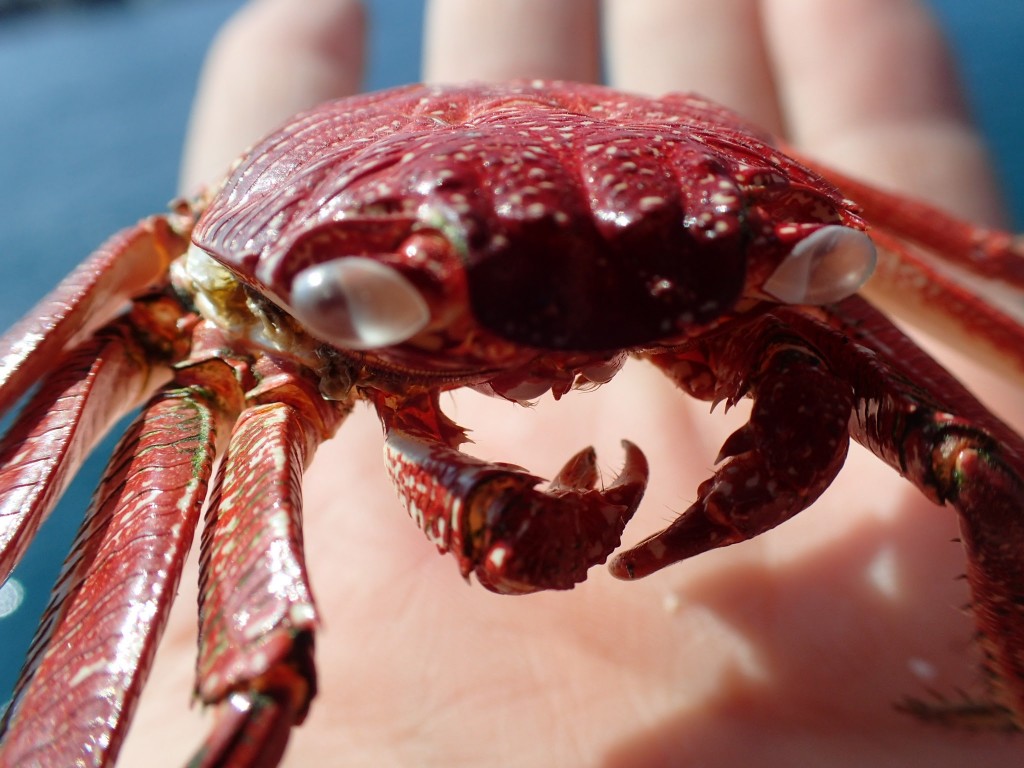 After a nap back at the hostel we fished in downtown Kona.  With Ken’s help,  I closed a chapter I had started that morning and caught a few more lifers to boot. 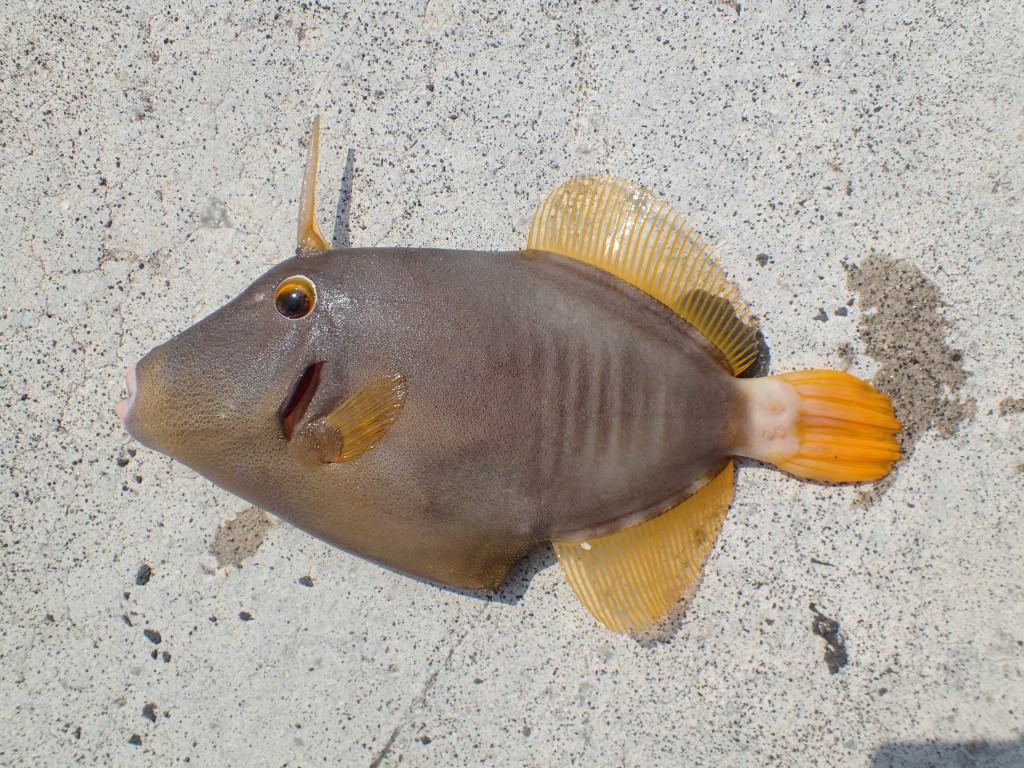 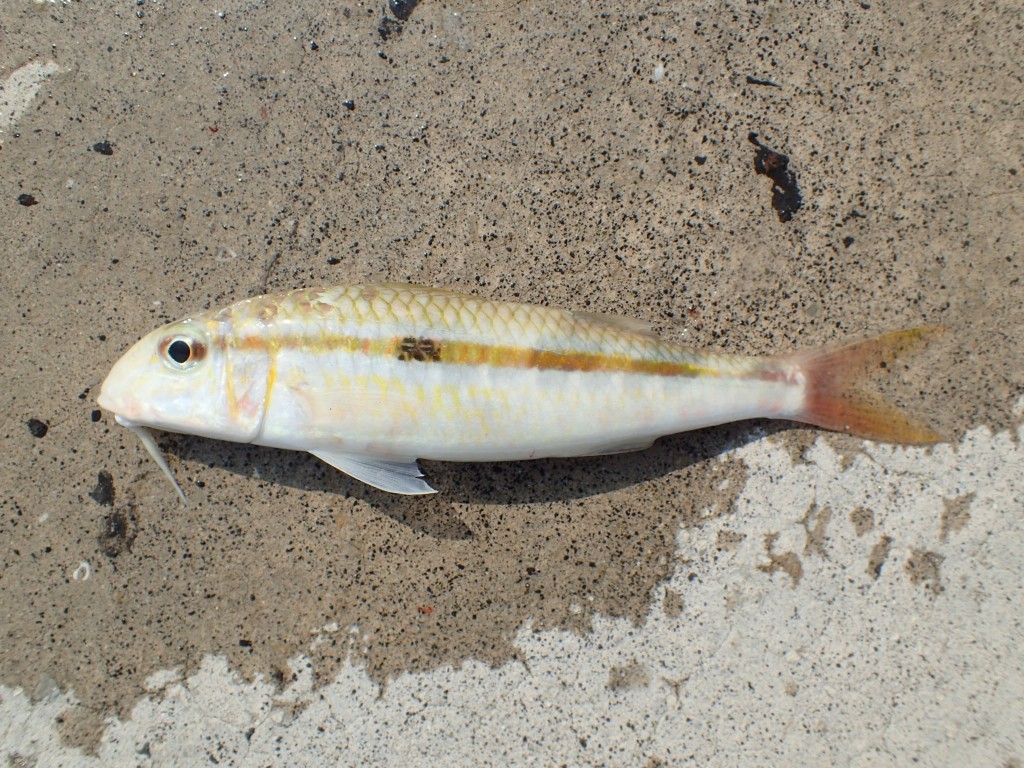 Ken discovered a school of mullet that were biting on bread, a rarity!  We took advantage of this opportunity to nab some lifer mullet! 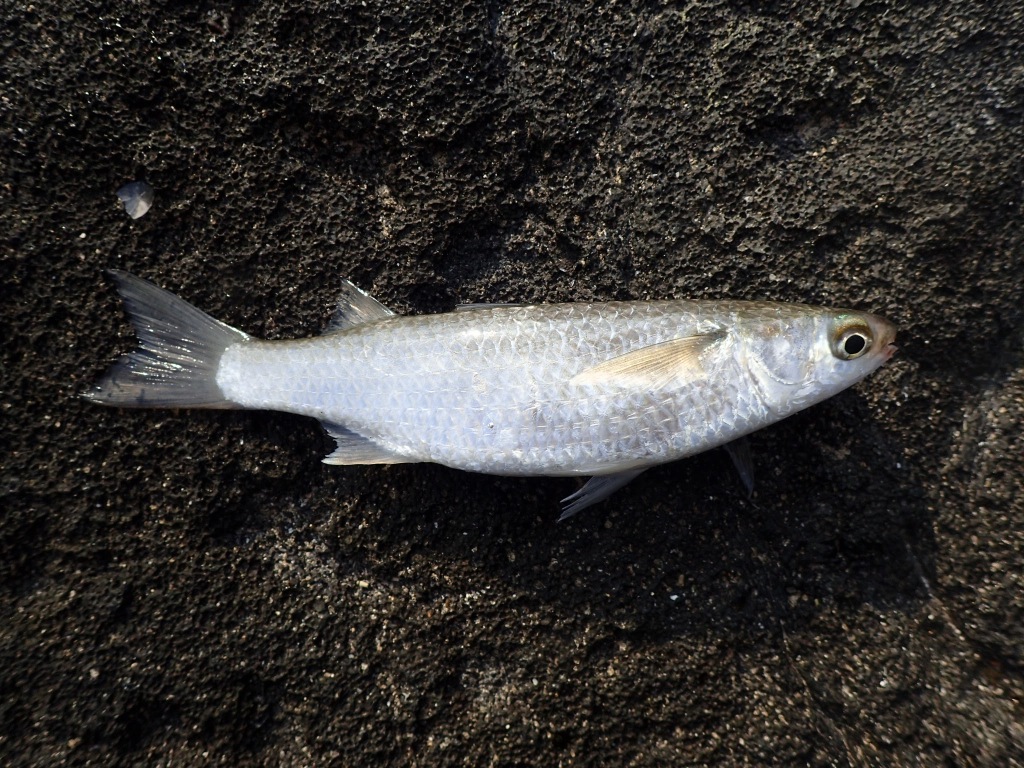 I had a close call with a whitespotted boxfish, having it hooked and rising to the surface before my tiny hook pulled free.  The frustration of the sailfin tang on Oahu was fresh in my mind.

We were about to move again, but just before we did we threw a whole bunch of bread in the water.  Suddenly a whole bunch of cool stuff showed up including a few raccoon butterflyfish!  Ken  had a close call with a huge parrotfish and then spotted a yellowfin goatfish for me that I eventually hooked, but my tiny hook pulled free once again reminding me of the boxfish and sailfin tang… an ever-growing list of close calls.

I did manage another chub, albeit a new one! 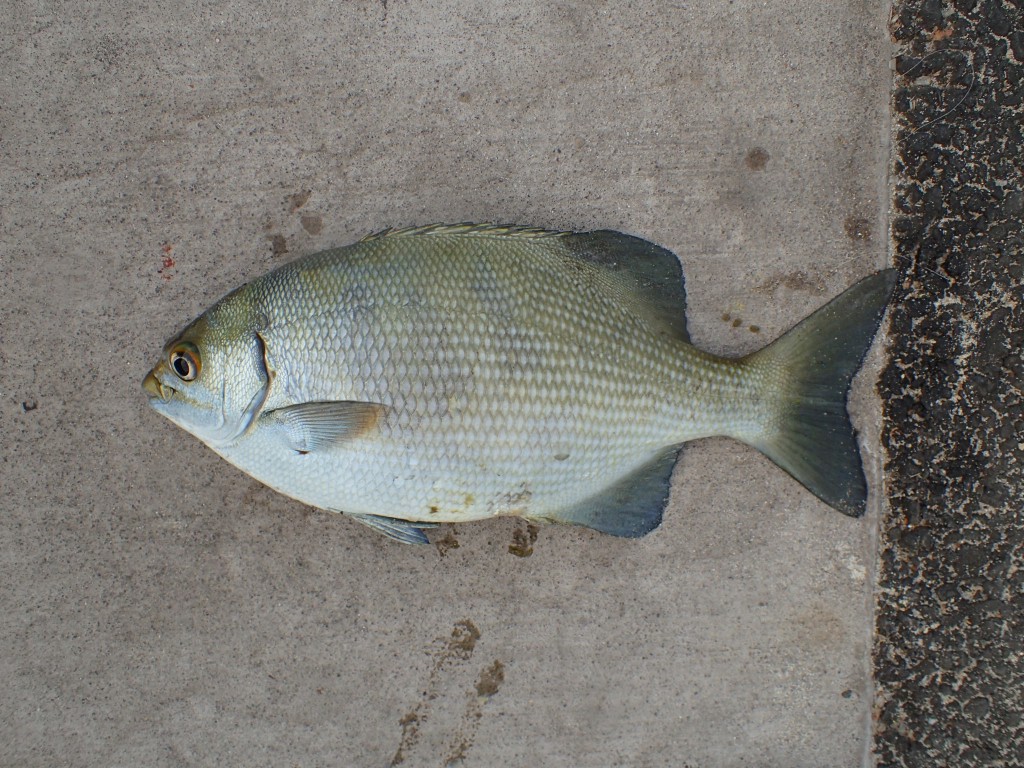 We tried for the few raccoon butterflyfish for a while, but the sun set and we moved off to the end of the pier…. 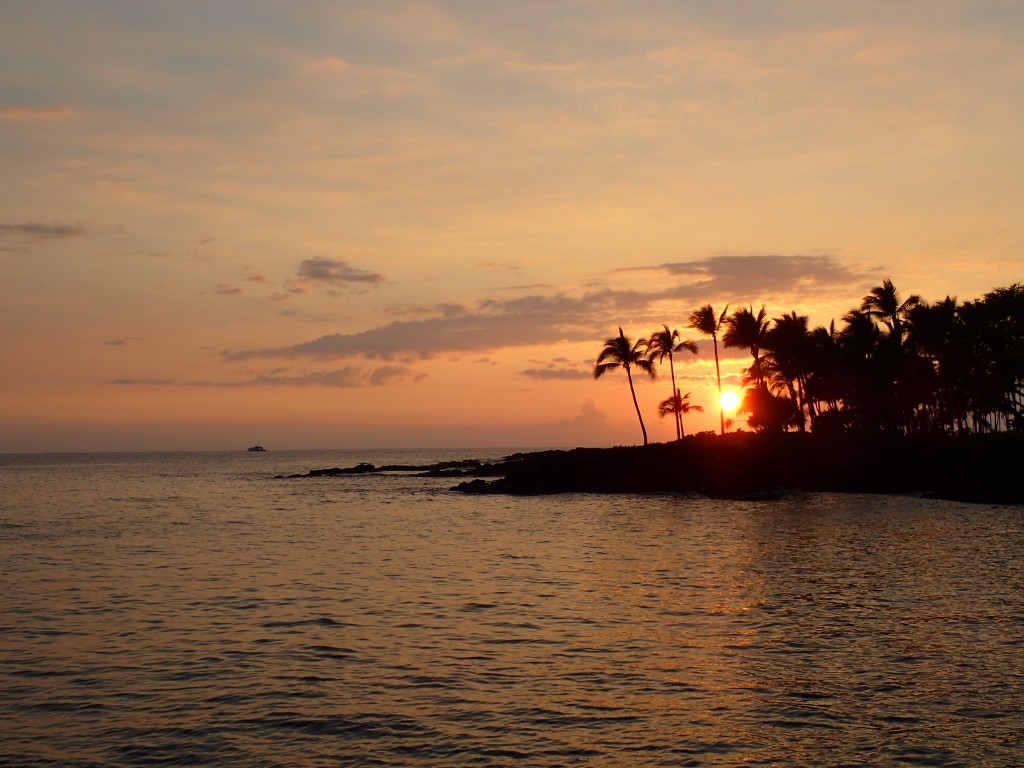 … and this is what greeted us… 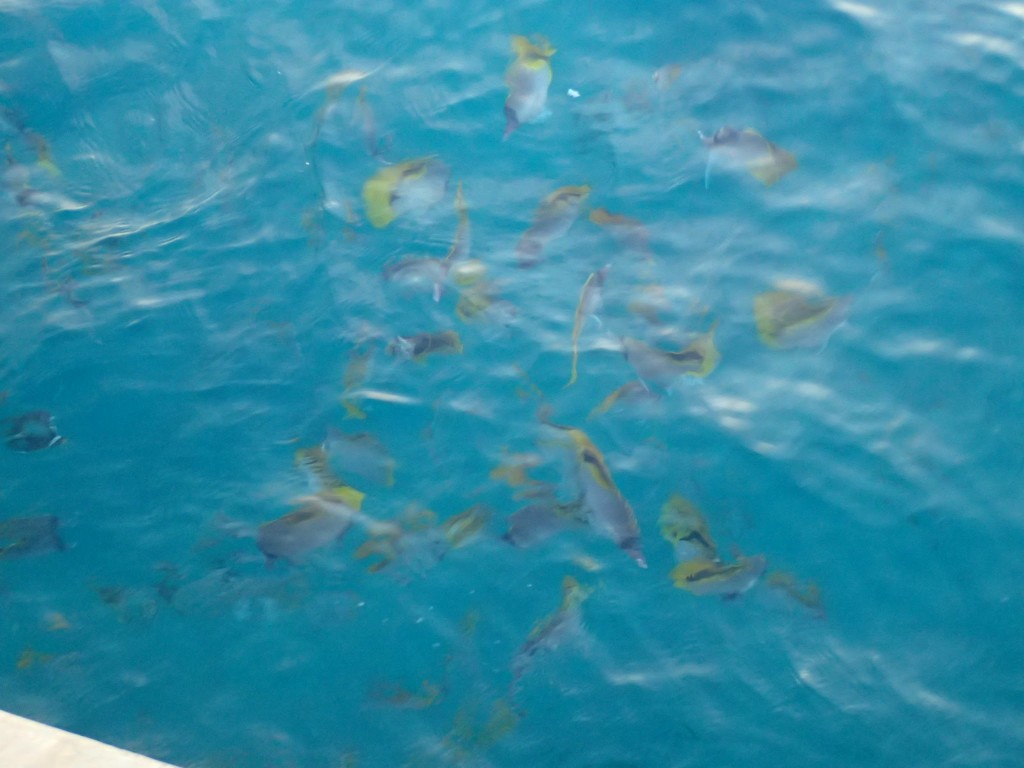 That school was a mix of lined and raccoon butterflyfish and Ken caught one without much effort.  Move successful!  Unfortunately, I couldn’t get one before night fell.  The irony of trying for hours at the few raccoon butterflyfish we had found when just around the corner was a platoon of them was very apparent.

Back at the hostel Ken sashimi’d the chub I had caught earlier.  It was some of the best sashimi I have ever had! 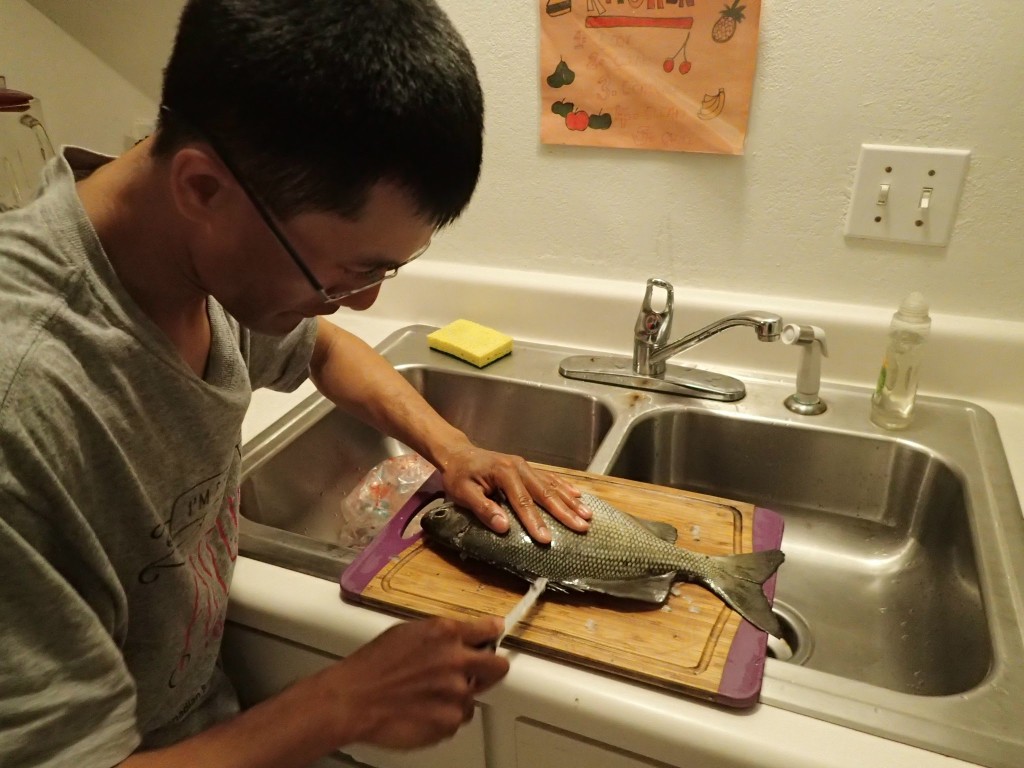 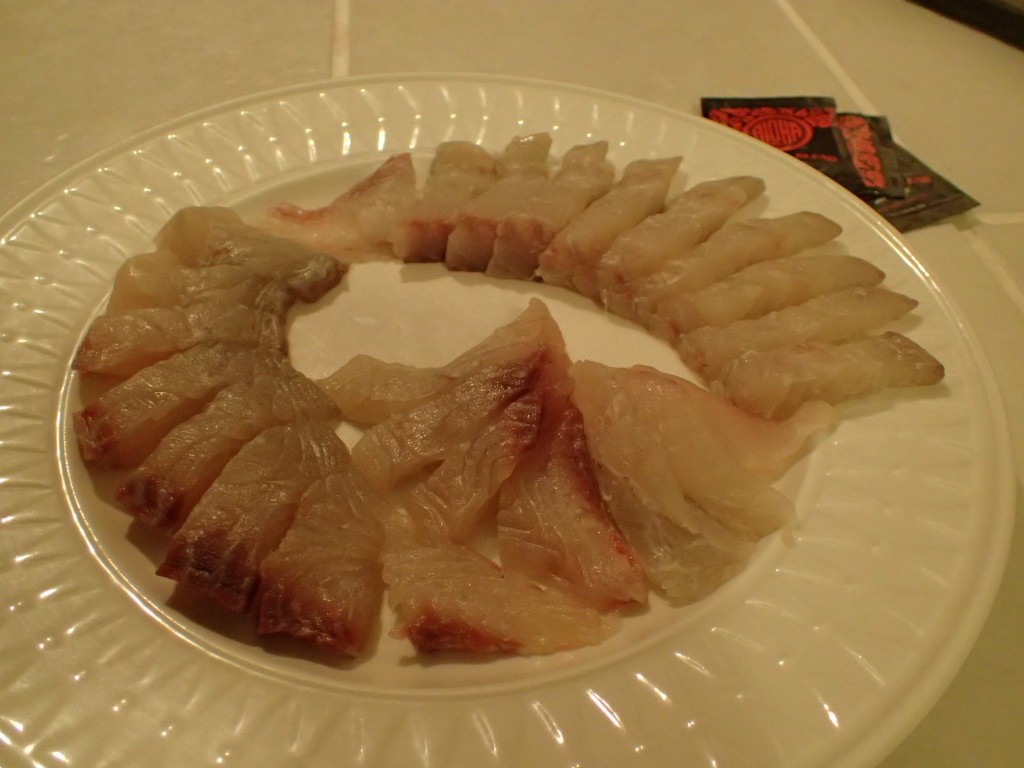 The next day we drove down to South Point where we met Ken’s friend Jefferey who had pulled out all the stops to accommodate us.  Jefferey had meals planned and had all the gear we needed to fish through the night. 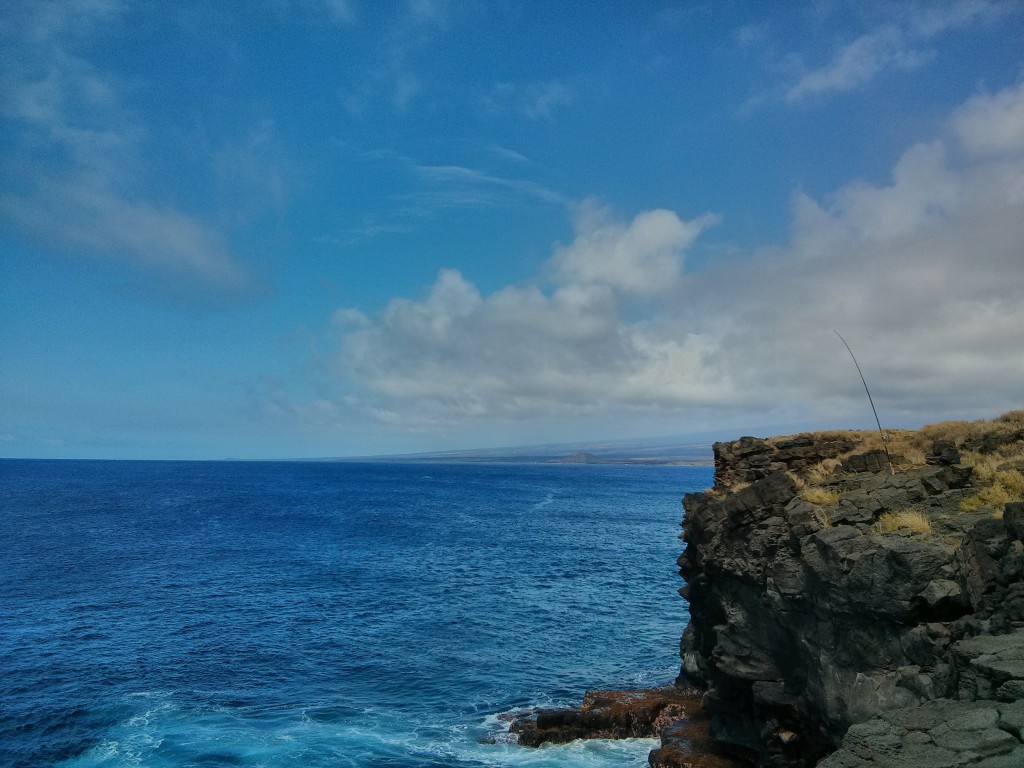 Jeffery sent rods out for Ulua (big jacks) which was an experience in itself to behold.  Ken and I planned to return that evening to target nocturnal menpachi (soldierfishes) afer a day of sightseeing at Hawaii Volcanoes National Park.

The road to and from South Point is a great place to be impressed by the destructive power of some recent lava flows! 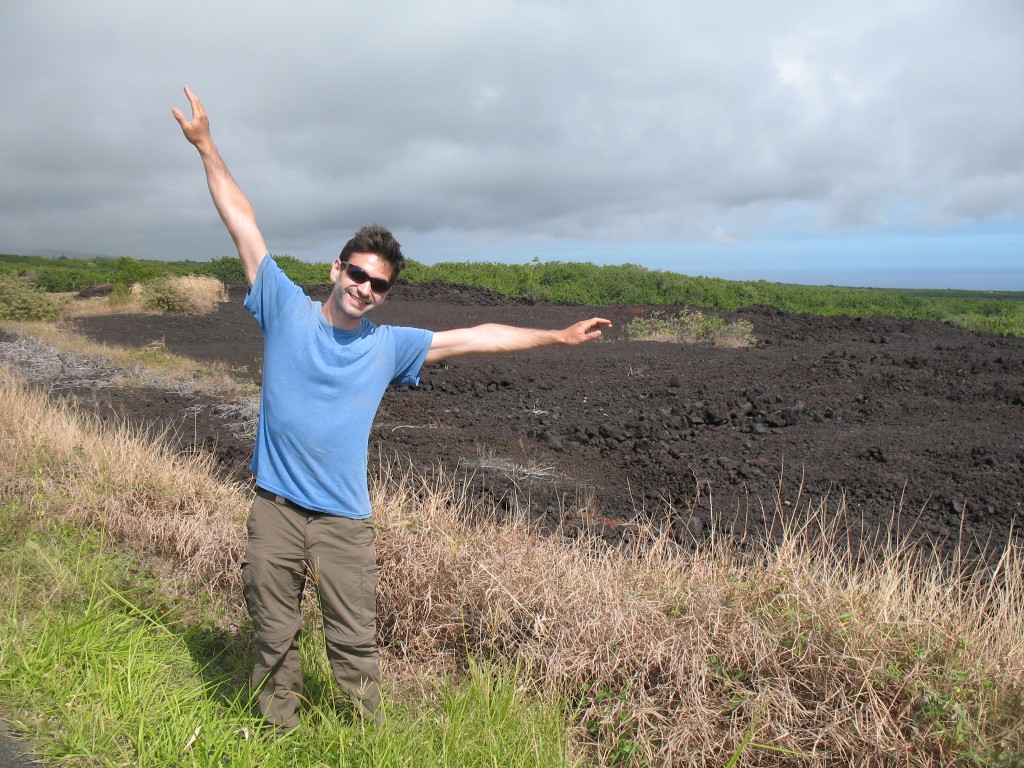 On the way to the park we stopped by a black sand beach to see some turtles. 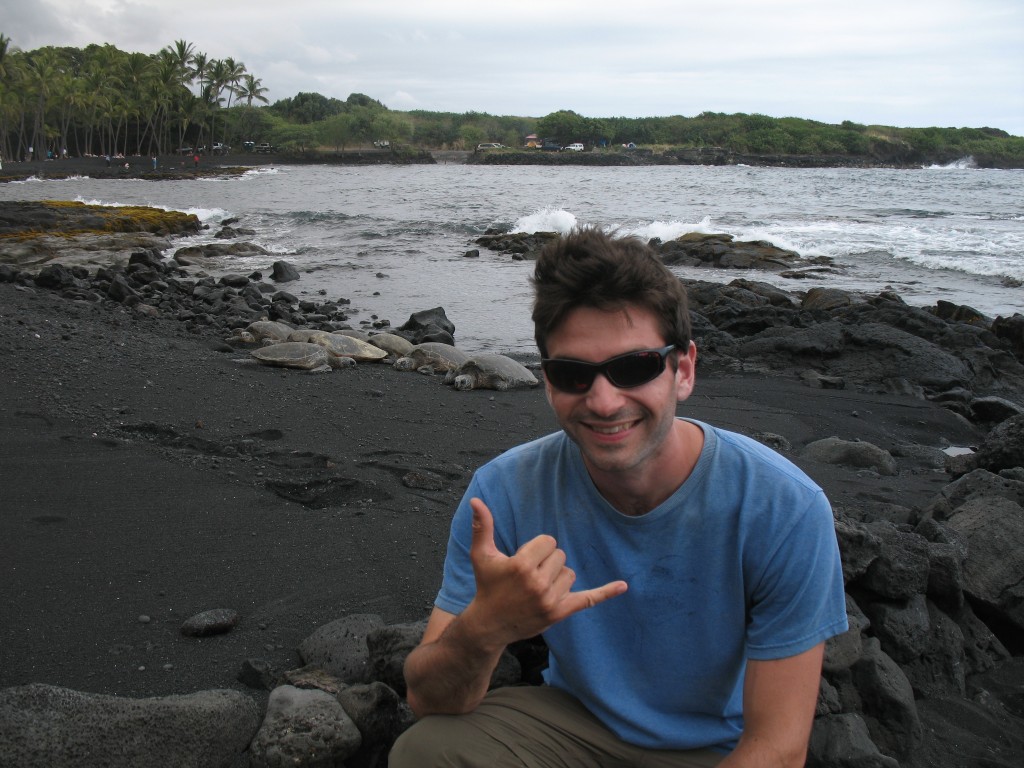 Arriving at the national park I tempted fate with the nene… 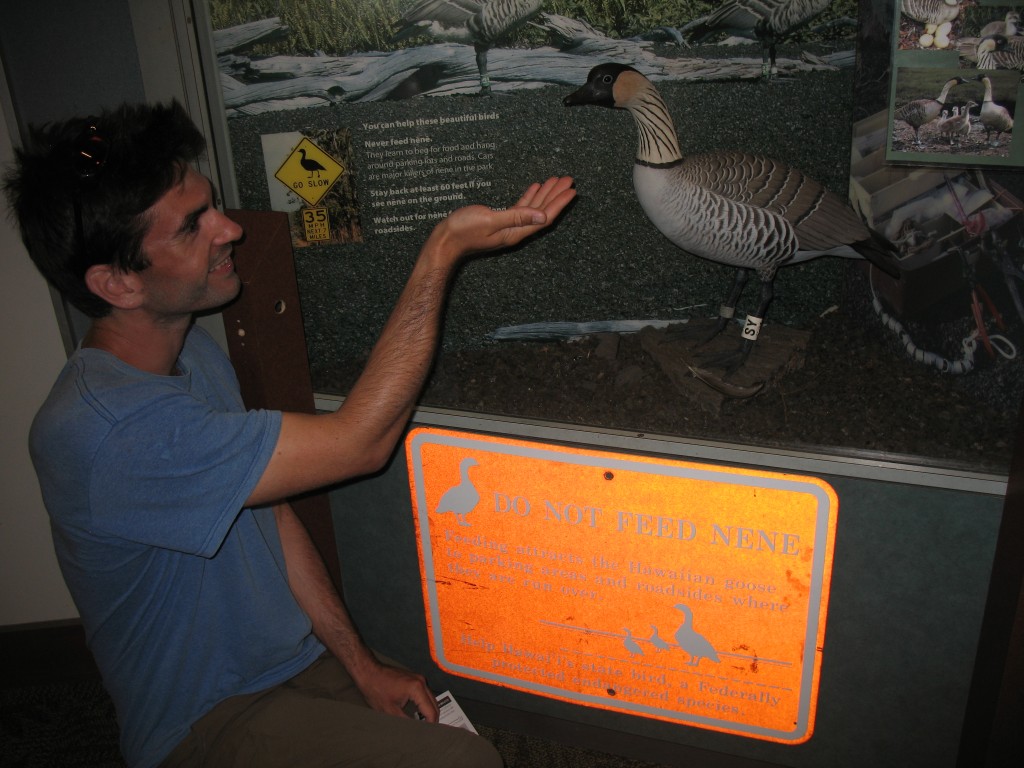 Unfortunately fog obscured the view of the Iki crater.  However, the fog did serve to intensify the alien landscape before us… 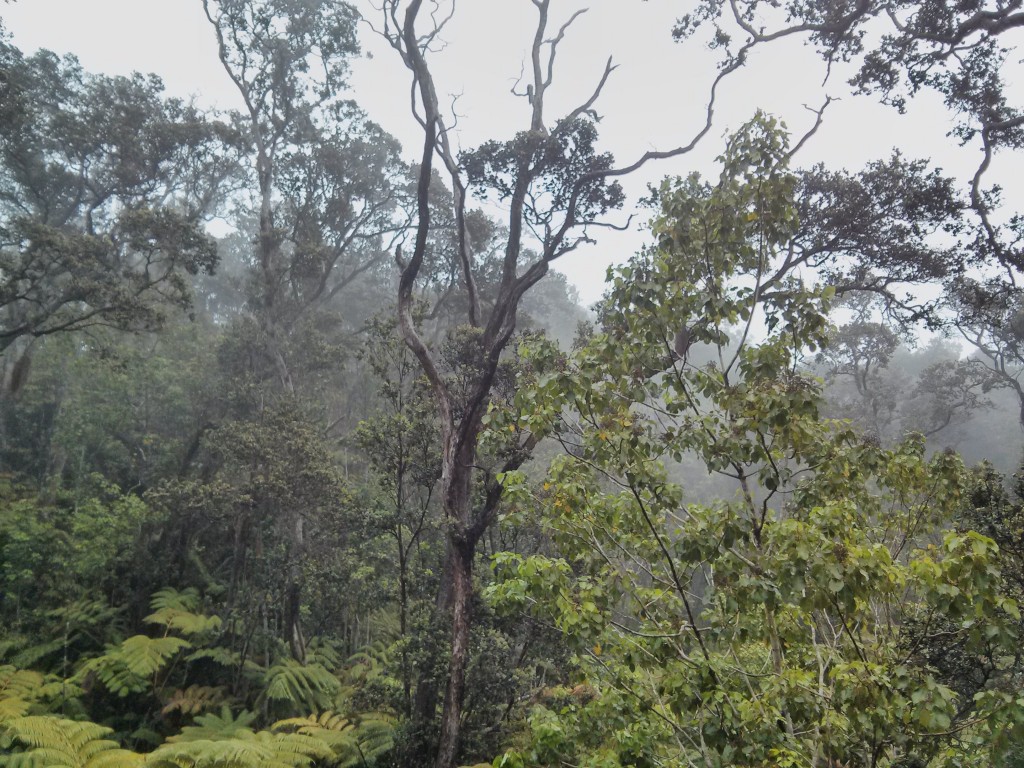 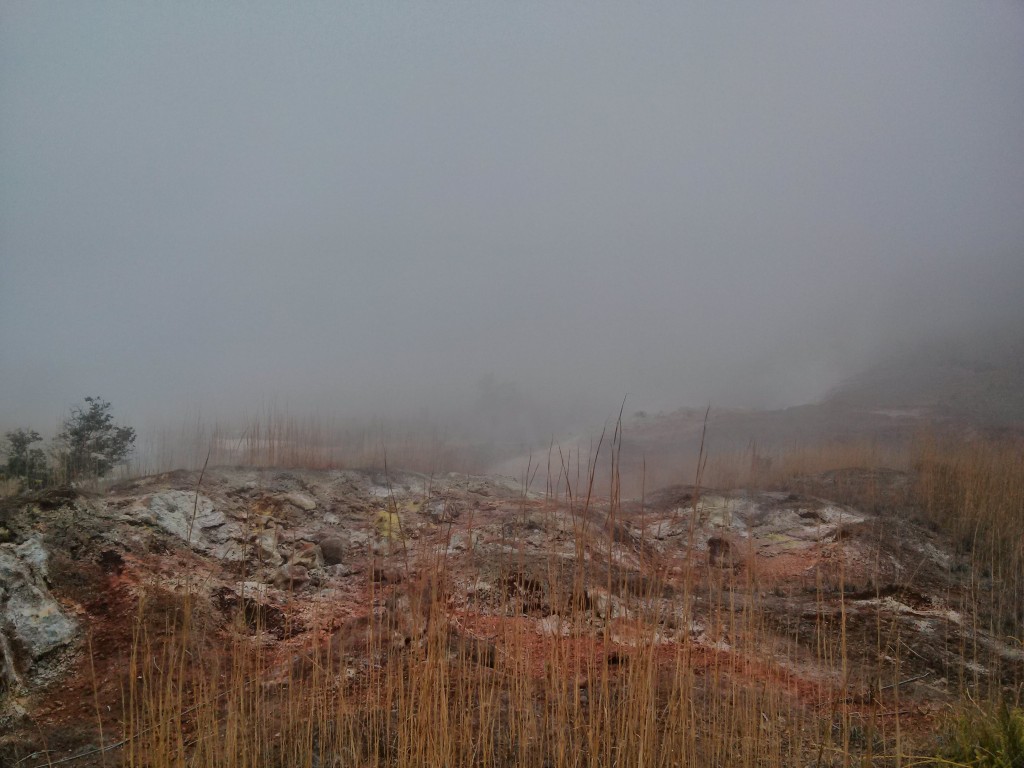 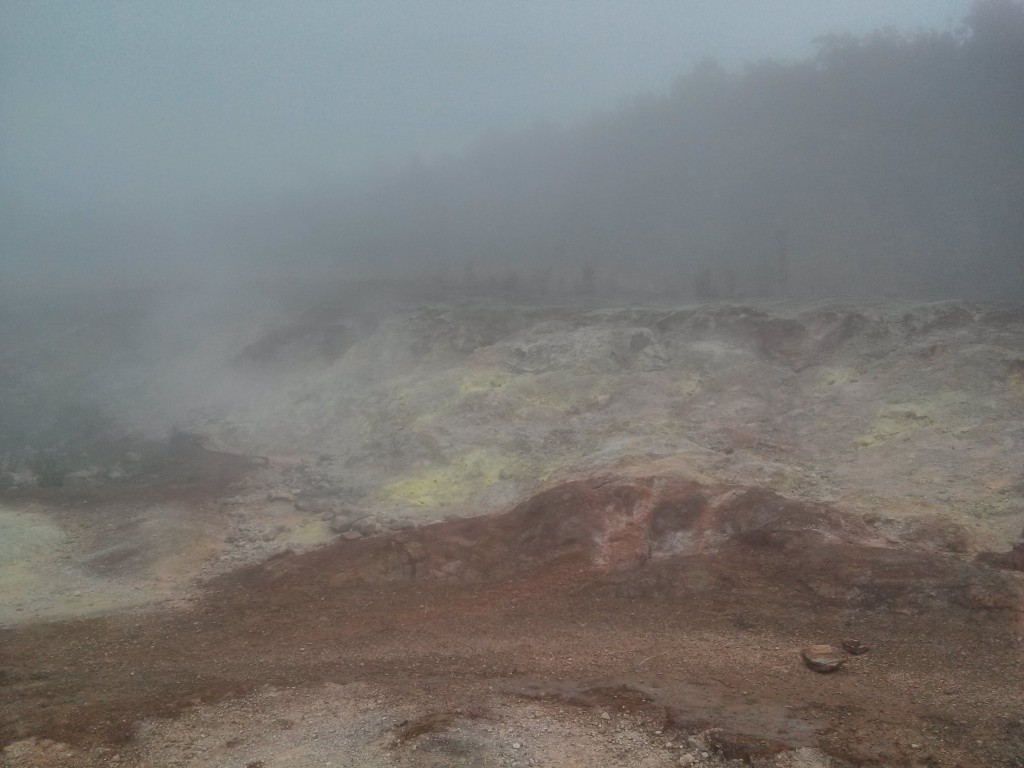 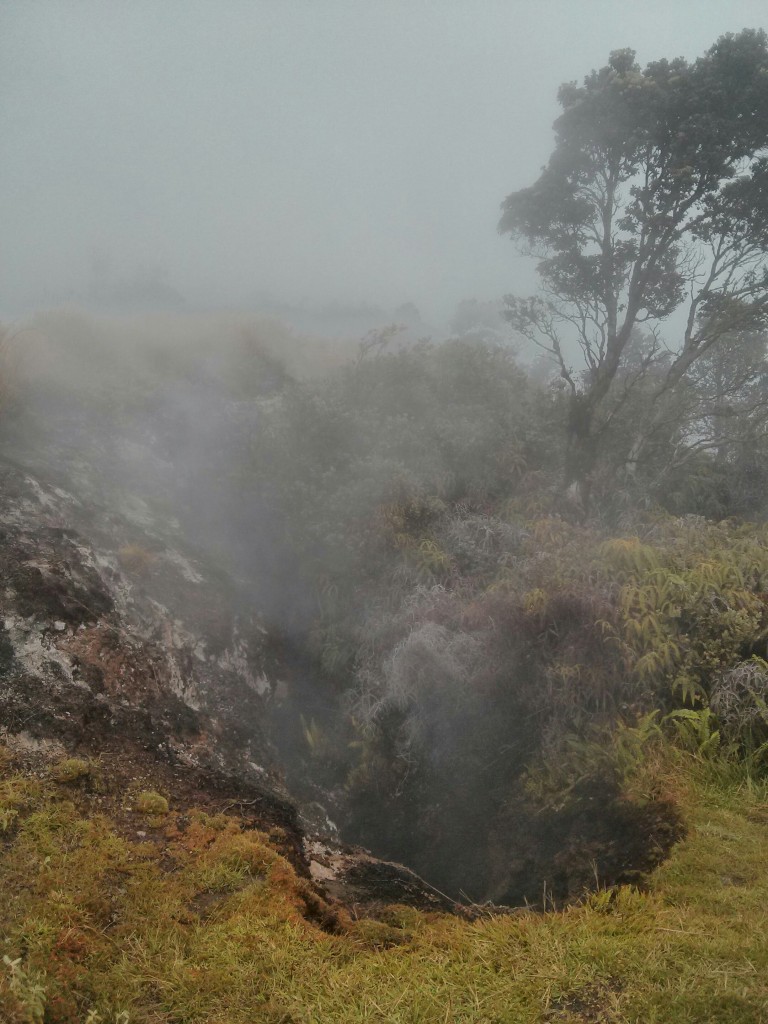 After a memorable hike through sulphur deposits and steam vents it was time to return to South Point.

High winds in an abnormal direction seemed to have shut off the menpachi bite, but Ken and I did manage to catch some lifers by presenting our baits slowly along bottom. 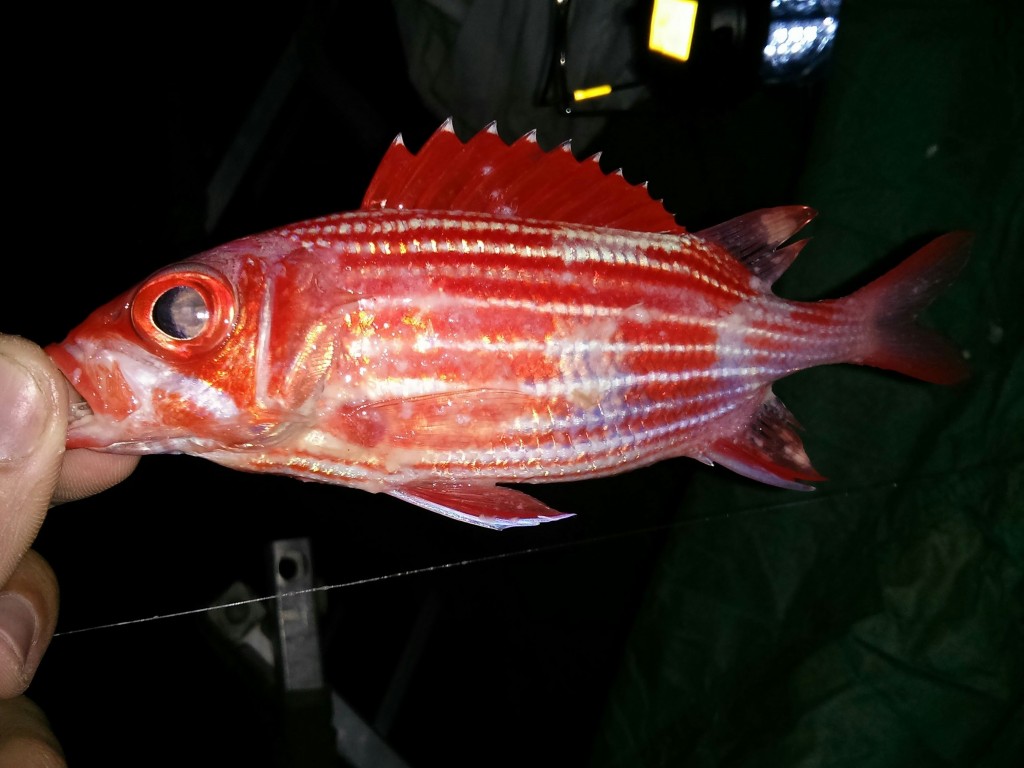 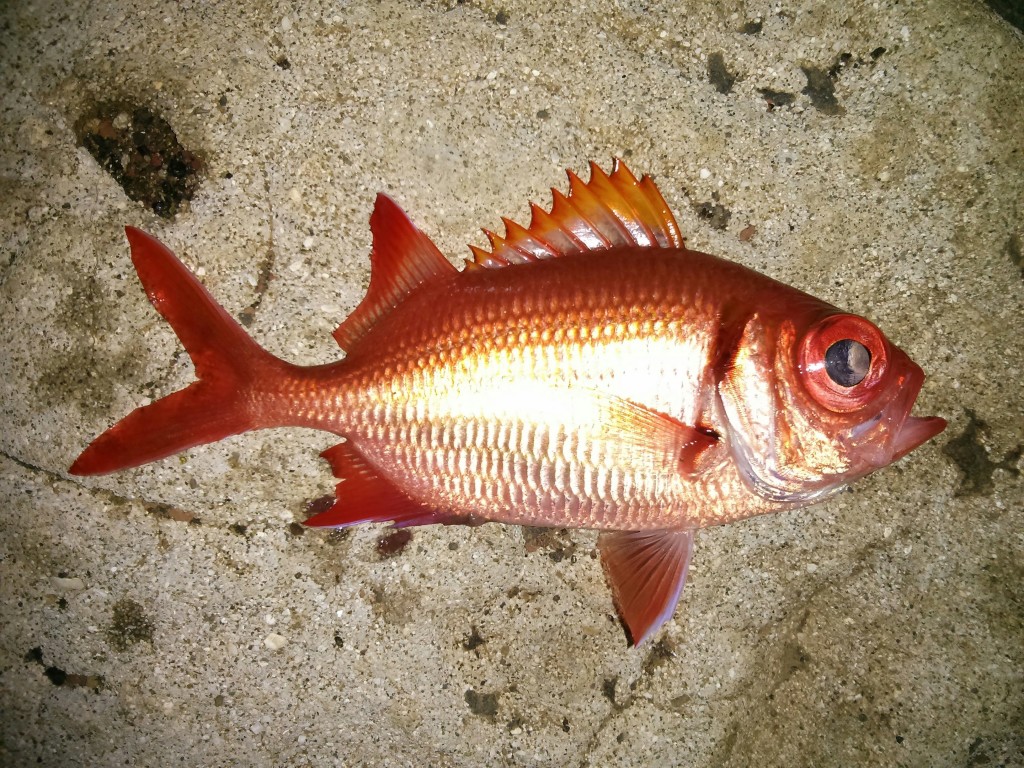 And, while not a new species at this point, I managed a decent shot that demonstrated the iridescence of these beautiful little bandfin cardinalfish: 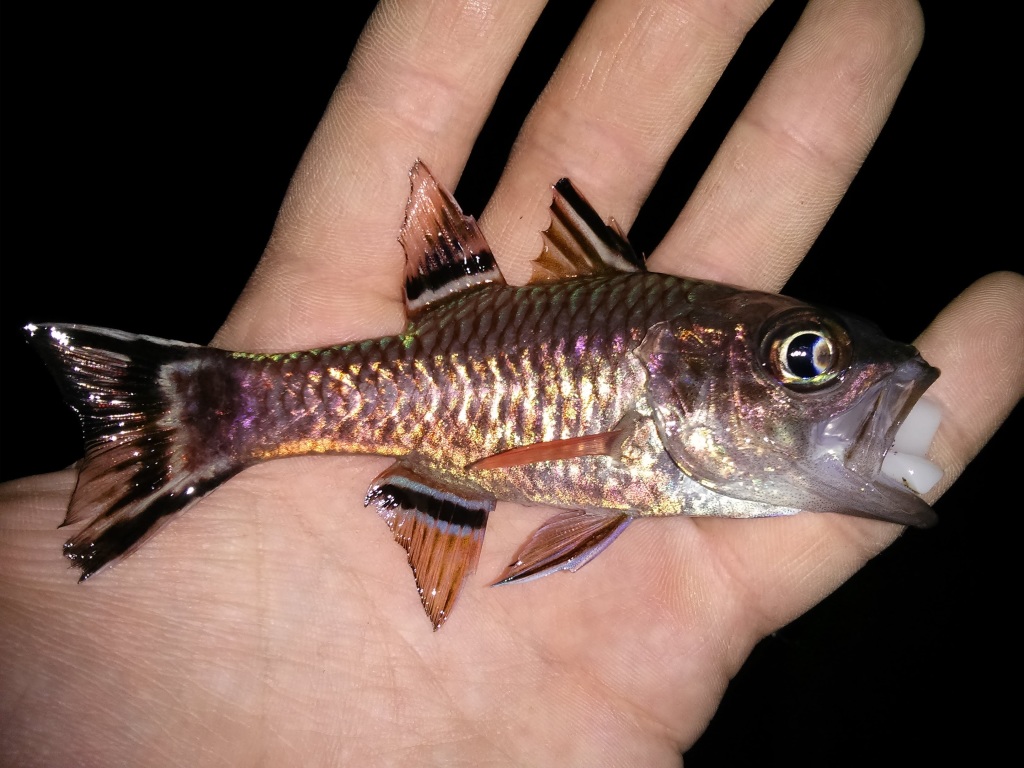 With the wind picking up to nearly unfishable levels, we packed it in the for the night and prepared to fish in the morning.