The Big Island:  There’s more than one way to peel a moray

The largest of the Hawaiian islands greatest us with a sunrise and pod of dolphins.  This was where we planned to buckle down for some serious fishing.  If there’s any common advice I can string through the days we spent here it’s to move spots.  Time after time a simple move of spots would yield multiple copies of that single fish we were pulling our hair out trying to catch.  And if not multiple specimens, one that would at least be eager to bite. 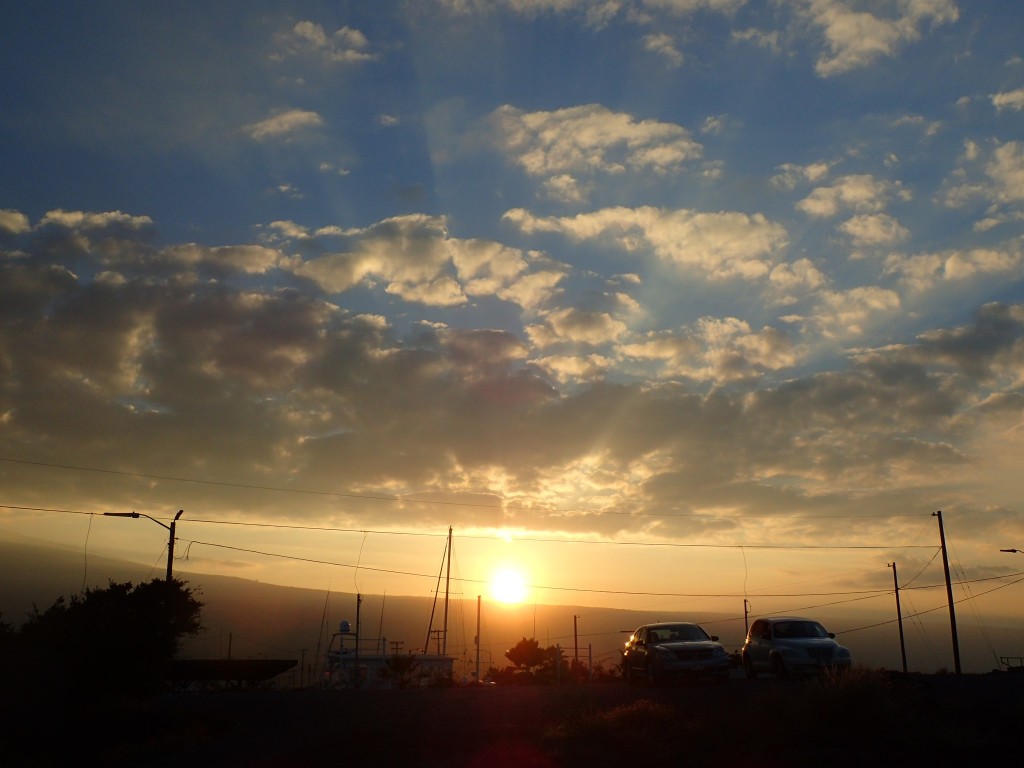 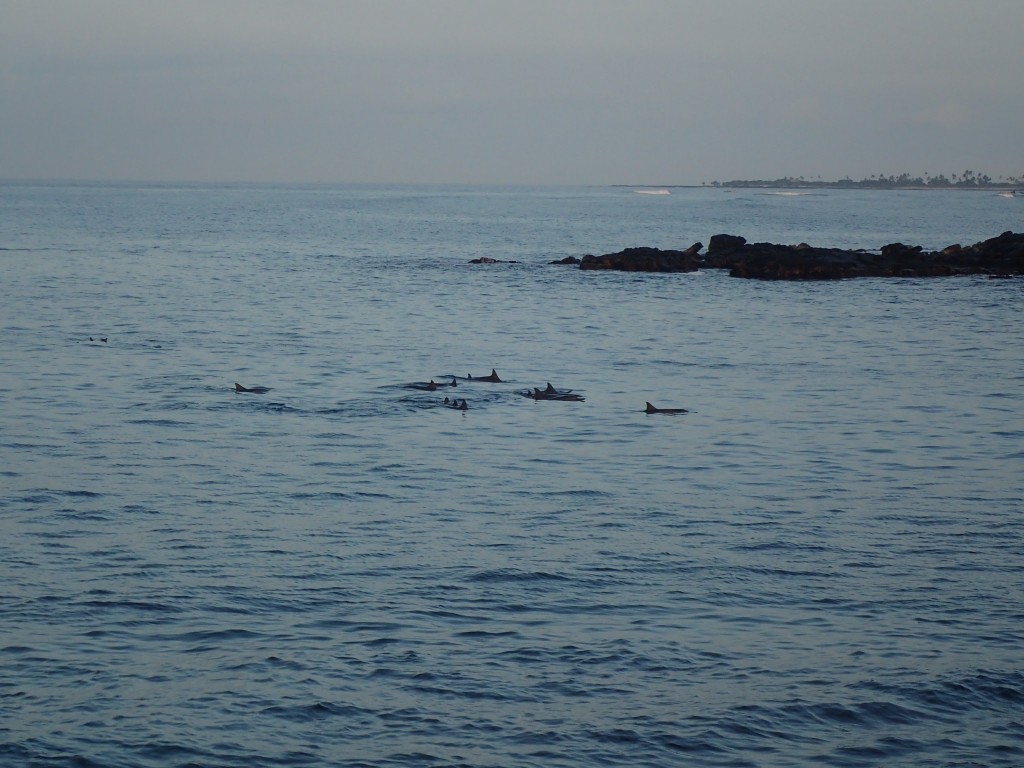 After checking into our hostel in Kona we fished a small bay that was littered with brown surgeonfish, a fish I’d only seen one or two of on Oahu!  Move successful!

However, our bread had dried up and wasn’t staying on the hook.  I left to get some fresh bread and when I returned I found Ken teasing a whitespotted boxfish into the area for me.  Unfortunately, this boxfish was so eager it took his bait before I could get a crack at it.  Little did I know this would be the beginning of an endless struggle to capture one. 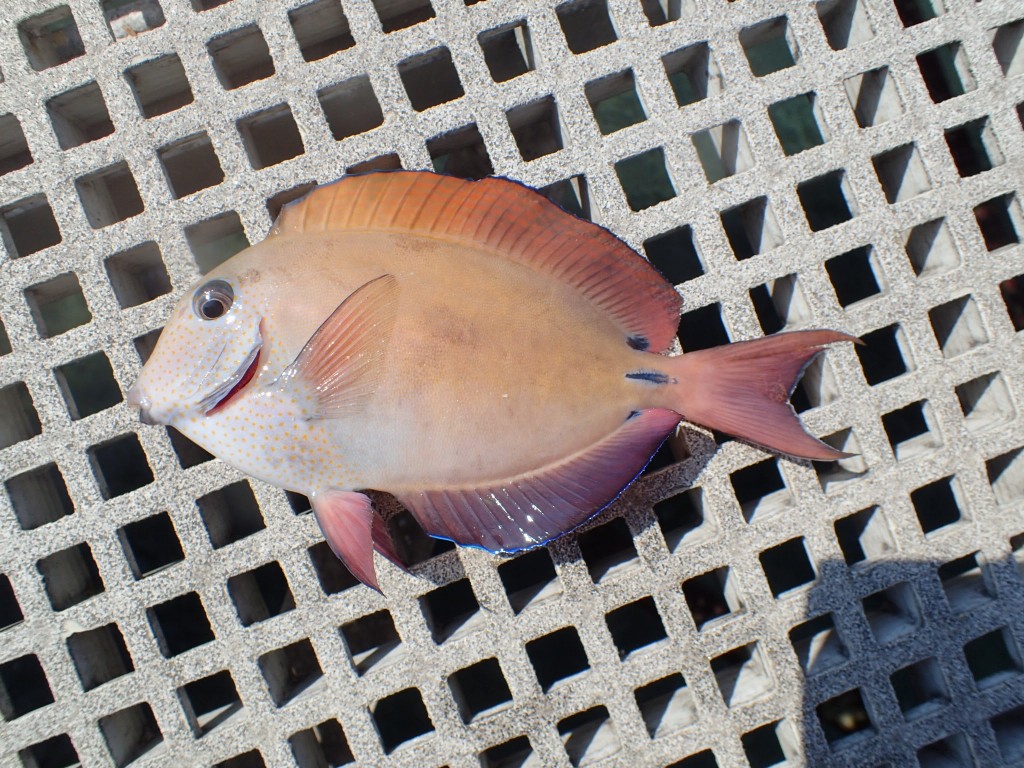 We then fished our away along a rocky shoreline where I got to chat fishing with a successful business executive.  There were plenty of black triggerfish, which really only look black in the water.  They’re beautiful, and very annoying. 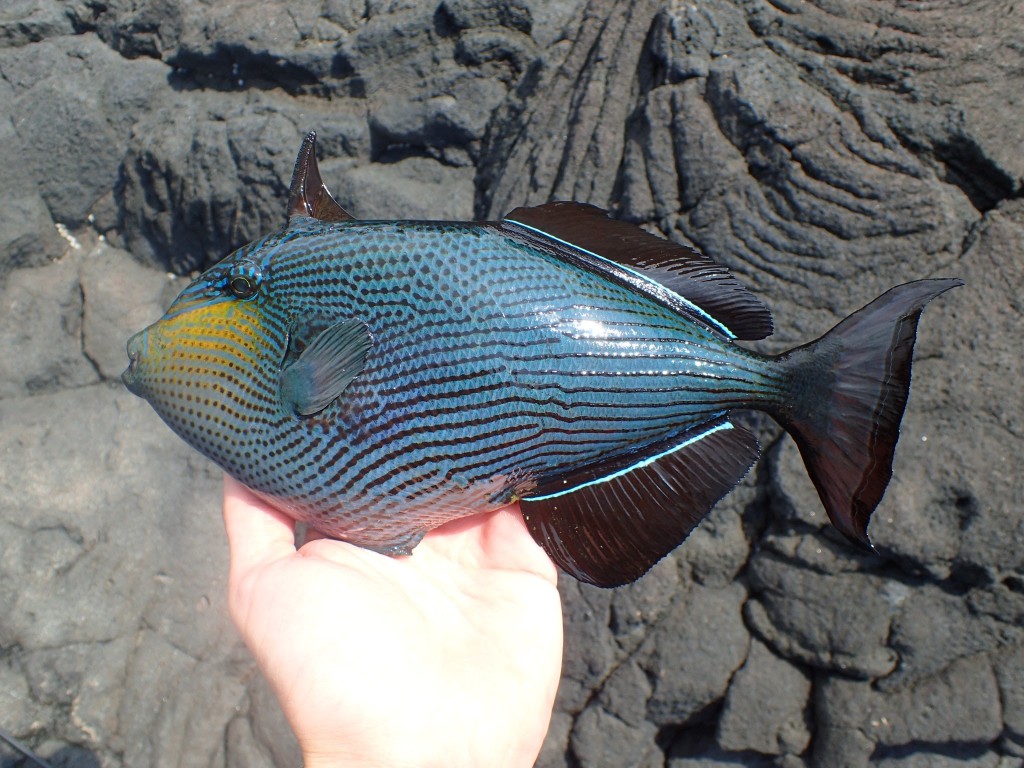 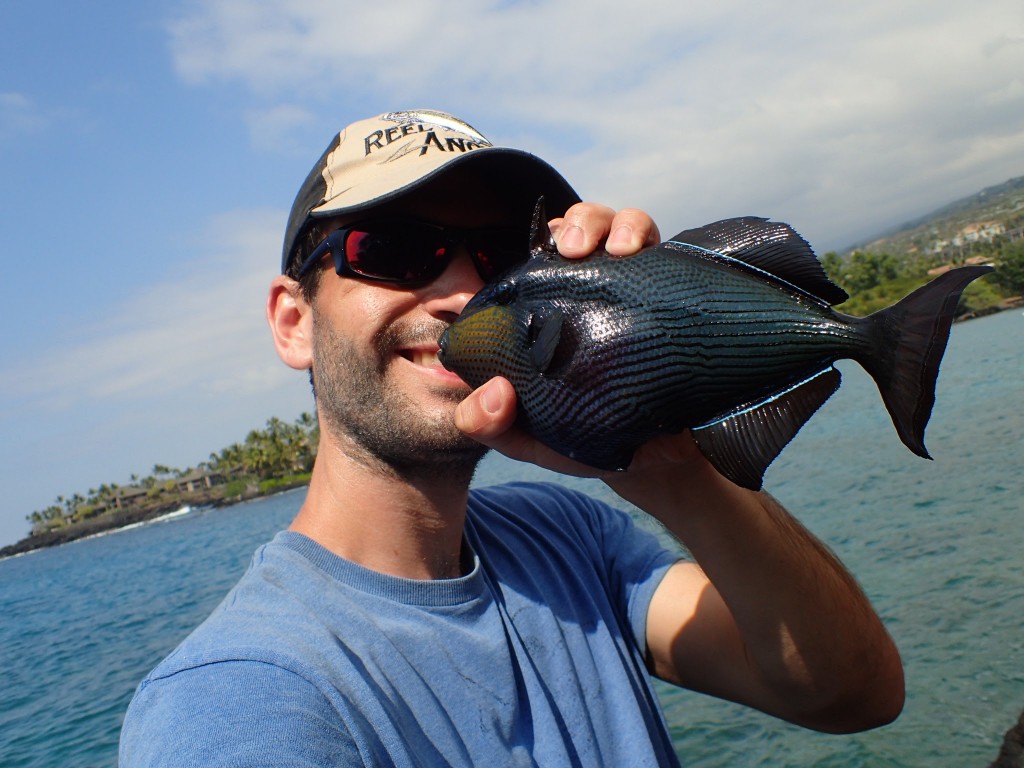 Ken had caught a lined butterflyfish amongst the triggers, but after I tried for an hour or so, they seemed to have moved out of the area.  While I fished I had the chance to chat fishing with a fairly well-known business executive which was pretty neat!

We worked our way up the shoreline and Ken spotted two eels.  He gave me a shot at the larger one. 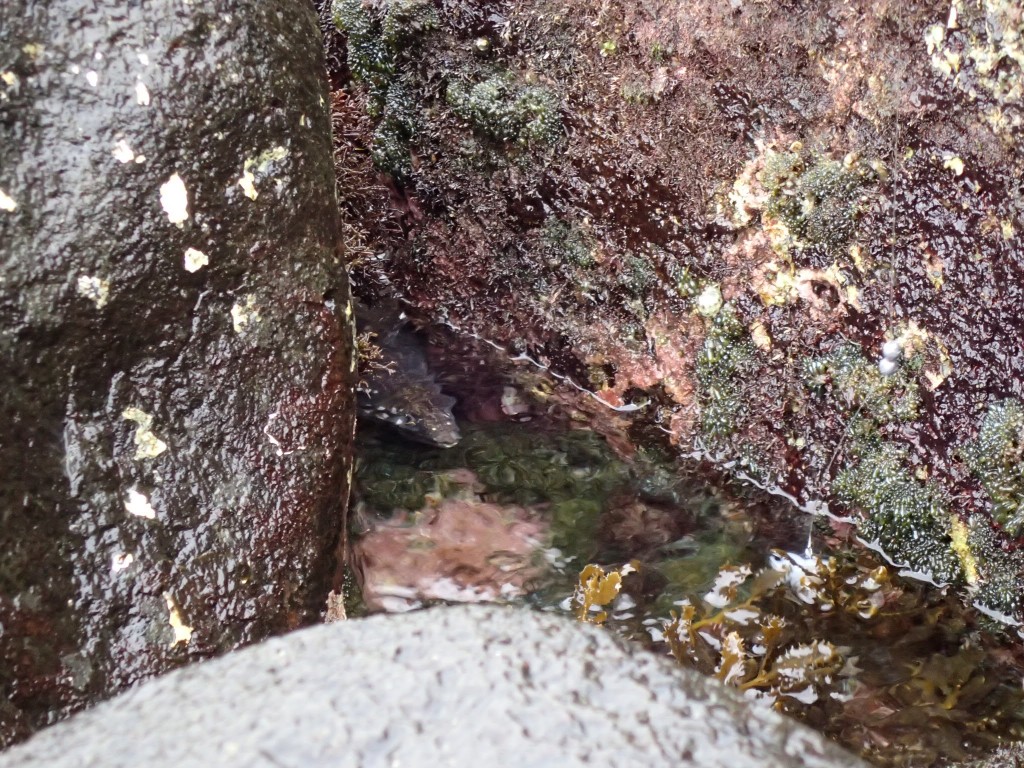 We improvised a handline out of a spool of 60lb leader to try and muscle it out of the rocks.  The eels were in the rocks we could climb onto, so a rod would only hurt our leverage.  Nevertheless, the eel won the tug of wars.  I sure was glad Ken brought his extra strong hooks though as mine bent out without much effort on the eel’s part. 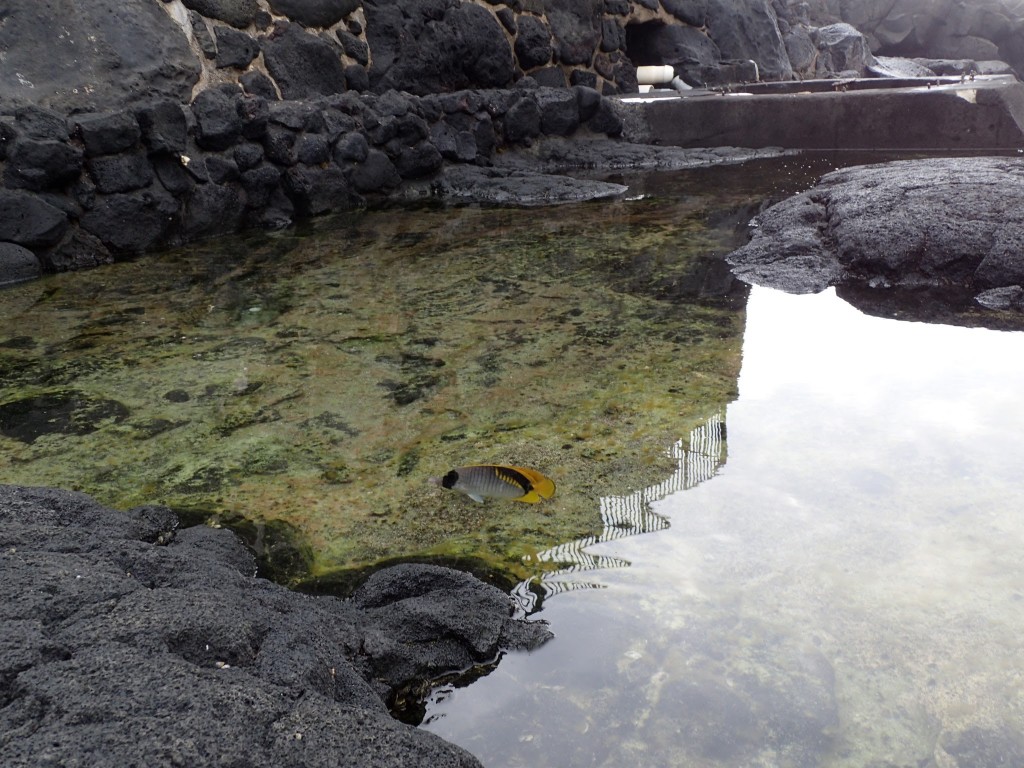 There it was, trapped in a tidepool!  After switching baits and presentations I was finally able to entice this poor trapped fish on a piece of shrimp jigged along the bottom.   Move successful! 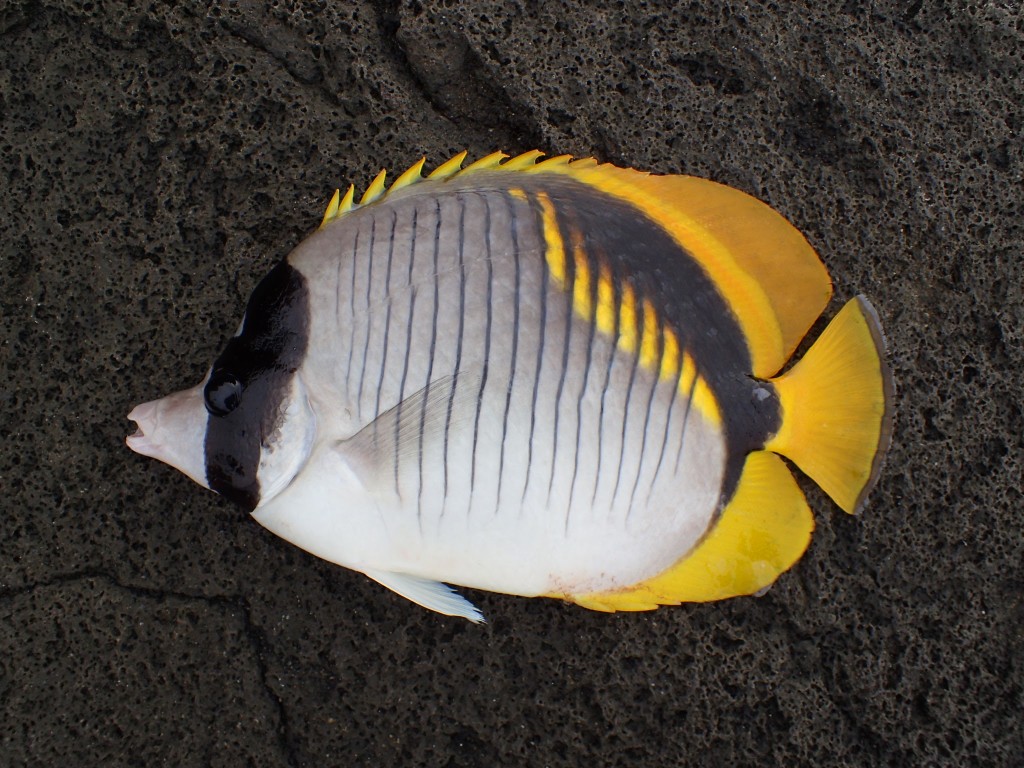 This tidepool also featured no shortage of frill-goby, but they were different kind than we had caught previously.  Blennies were also present albeit very skittish.  After some effort, one took the bait. 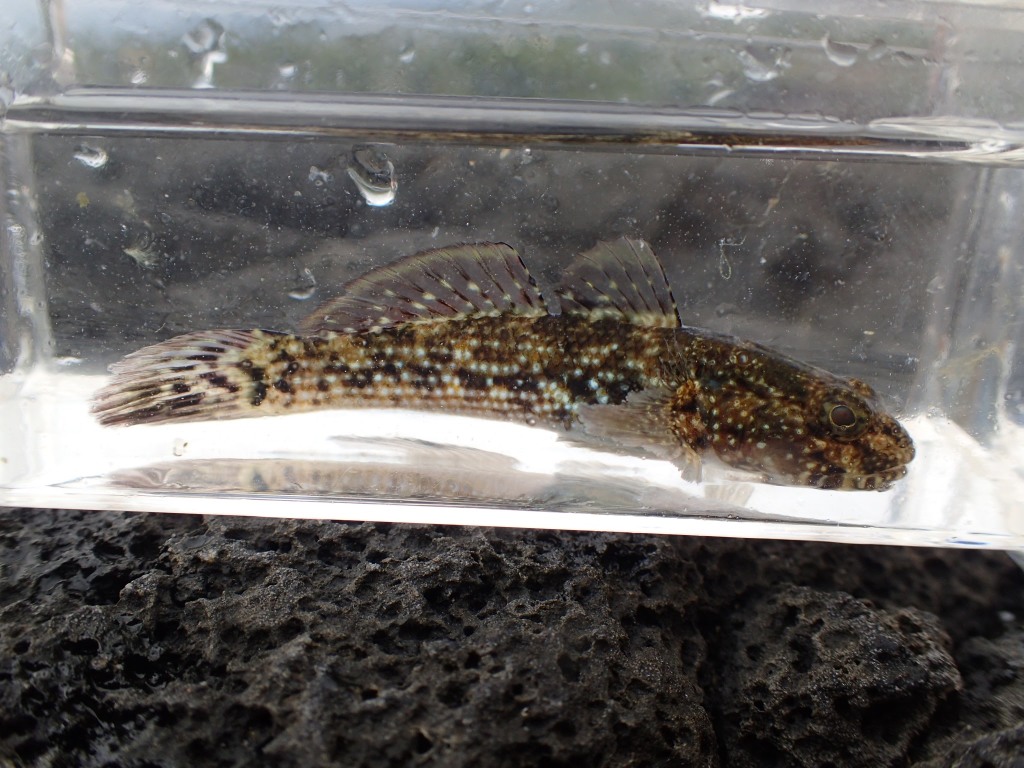 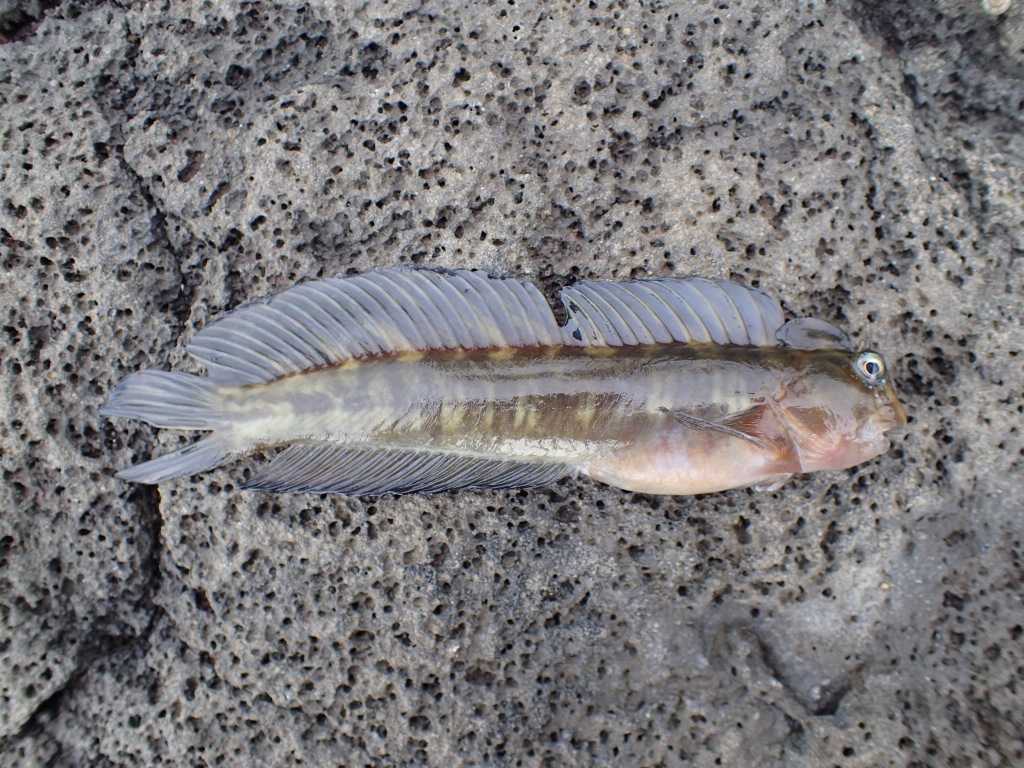 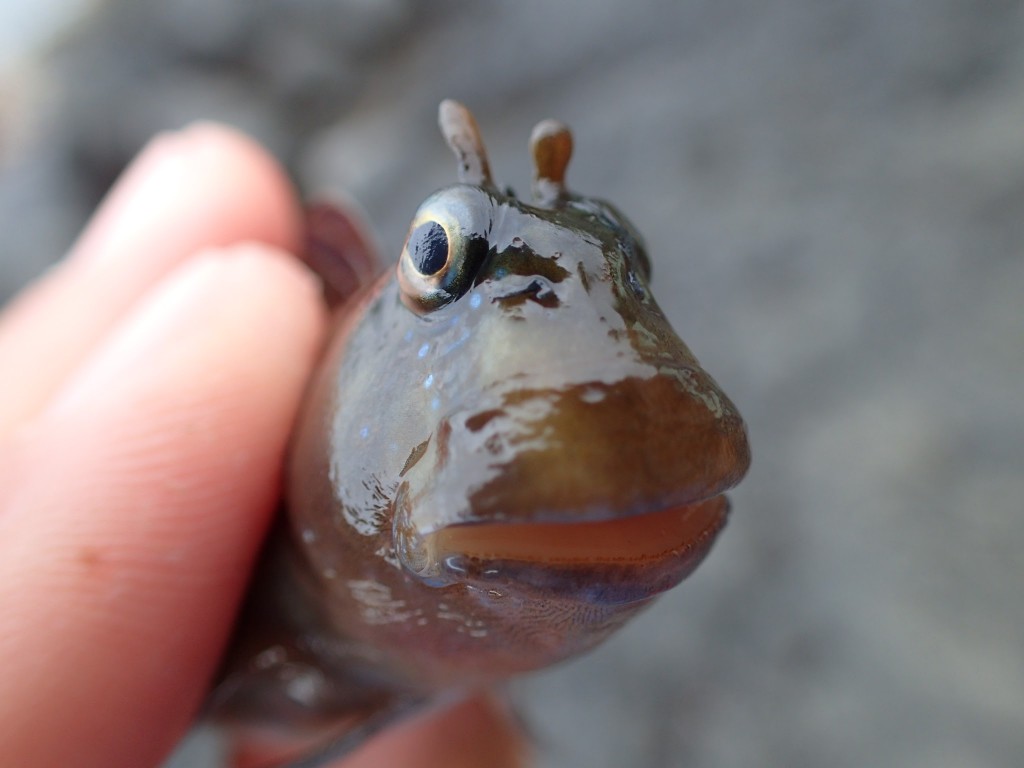 As night fell we fished off of the rocks.

Hawaiian chub (*unsure on this identification) 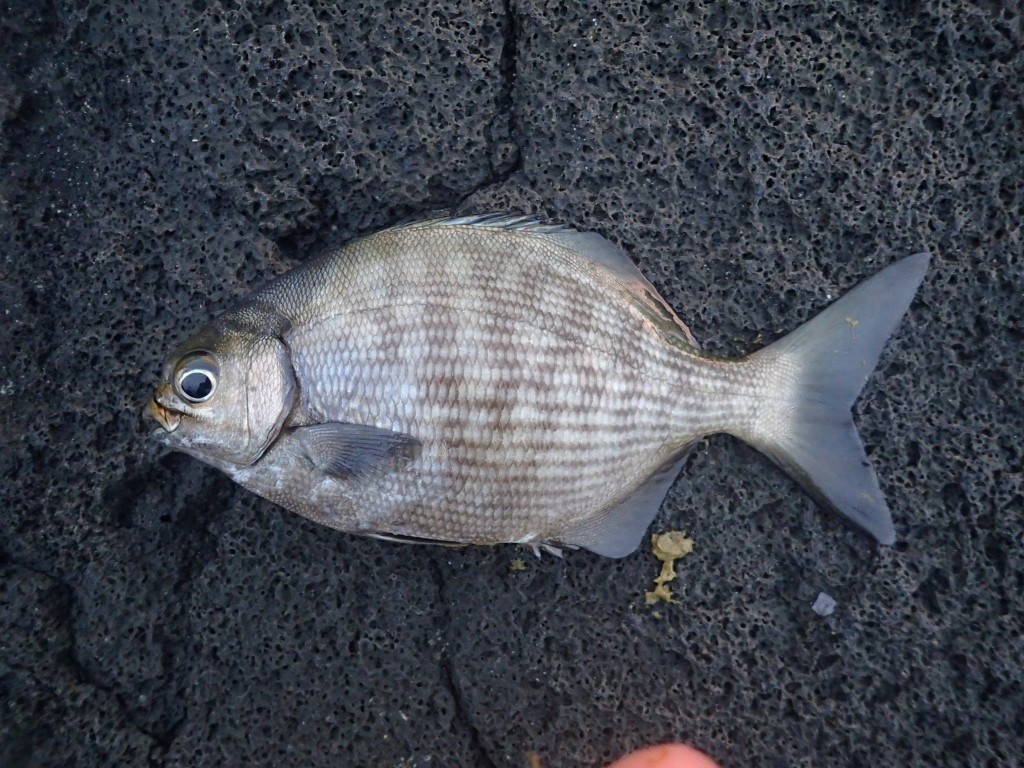 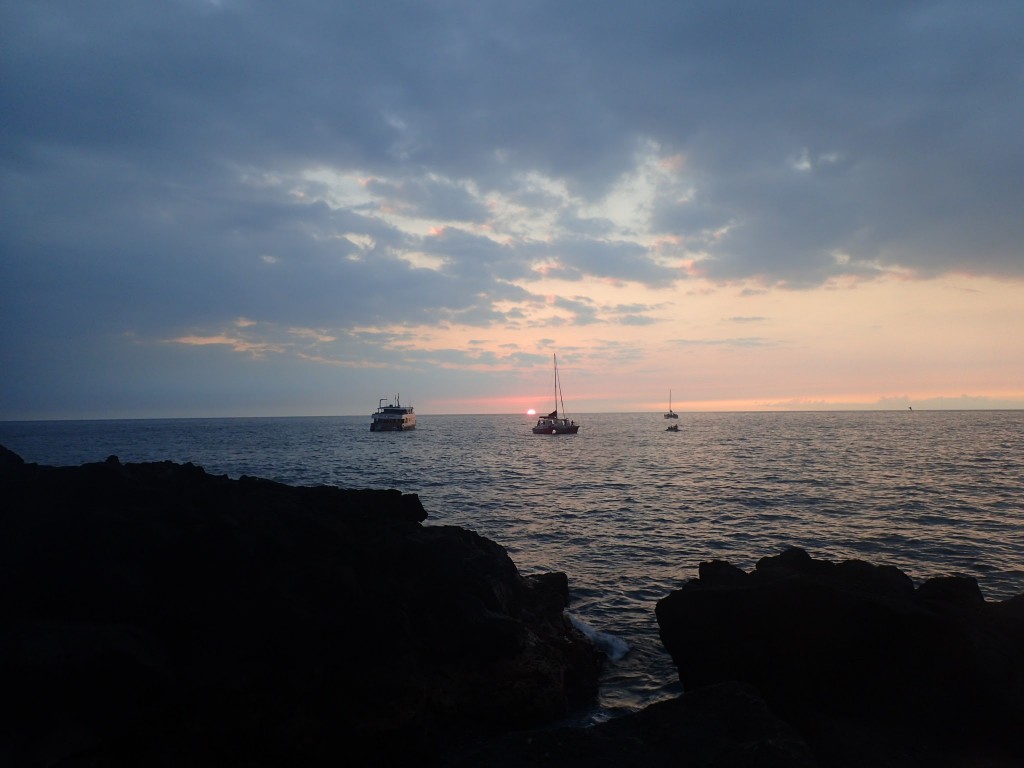 As we walked back to the car in the dark, we figured we’d visit our eel again.  Ken had mentioned that eels tend to stay around the same hole and this one was no exception.  This time, the eel came out a bit further for the hand-lined bait and I was able to pull it out without much effort! 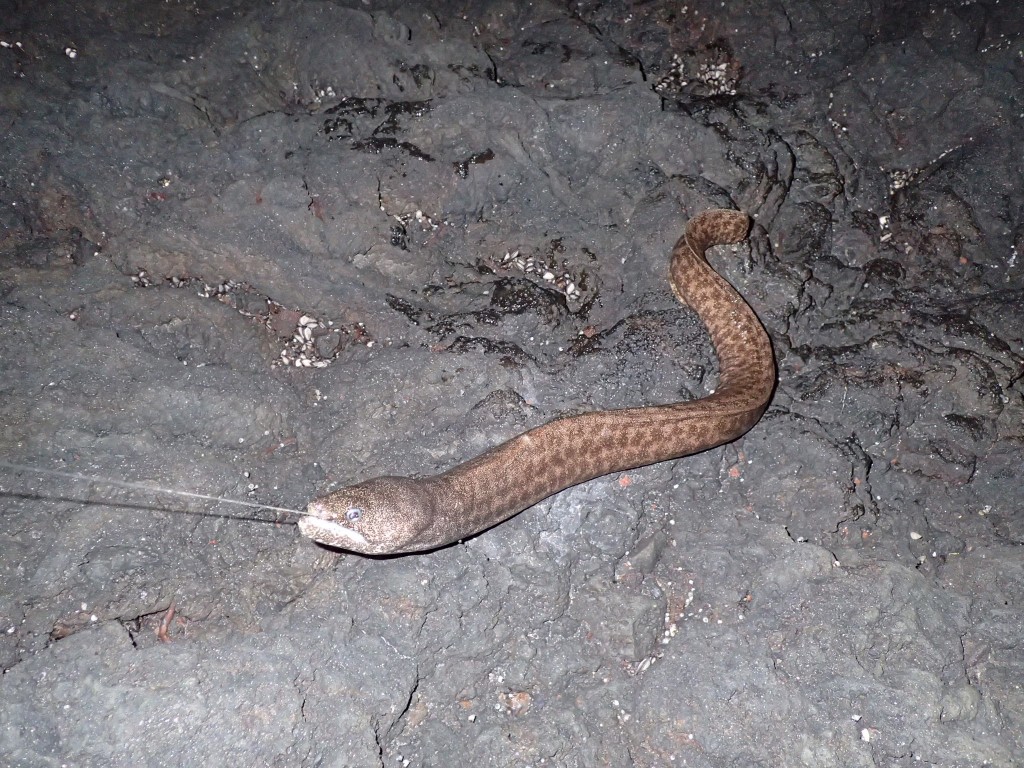 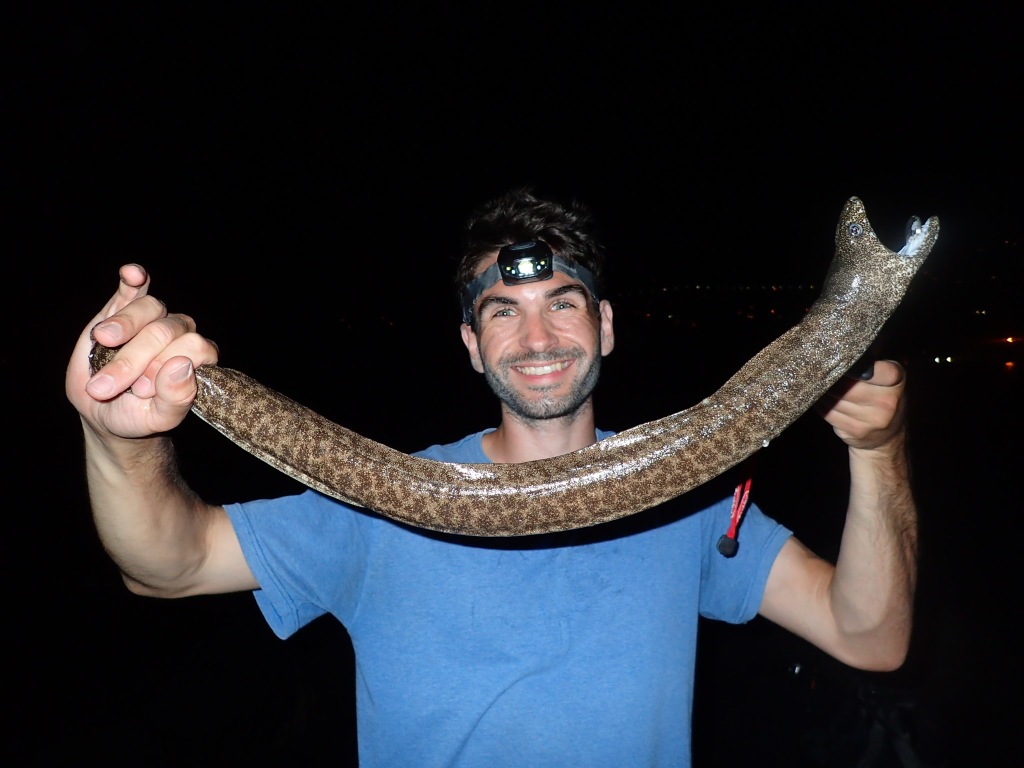 We then fished the dock where we had found the brown surgeonfish and found only speckled squirrelfish.  I threw some chum on a rope out from the rocks and when I checked on it, I found it had been pulled into the rocks.  I wasn’t sure whether this was due to wave action or a fish so I poked around with the hand line.

As I dipped the bait between rock crevices, my heart jumped to my throat.  An even larger paintspotted moray poked his head out without the slightest fear of my presence.  Ken and I played tug of war with this eel several times and either the line would break or the hook would pull free.  Soon, we found yet another paintspotted moray sharing the same hole!

We had these eels moving well out of the water to grab baits, but despite our best effort we were defeated.  Nonetheless this was quite the unique experience to say the least.  The hand line did seem like the best way to go, giving us the most leverage on fish right at our feet.