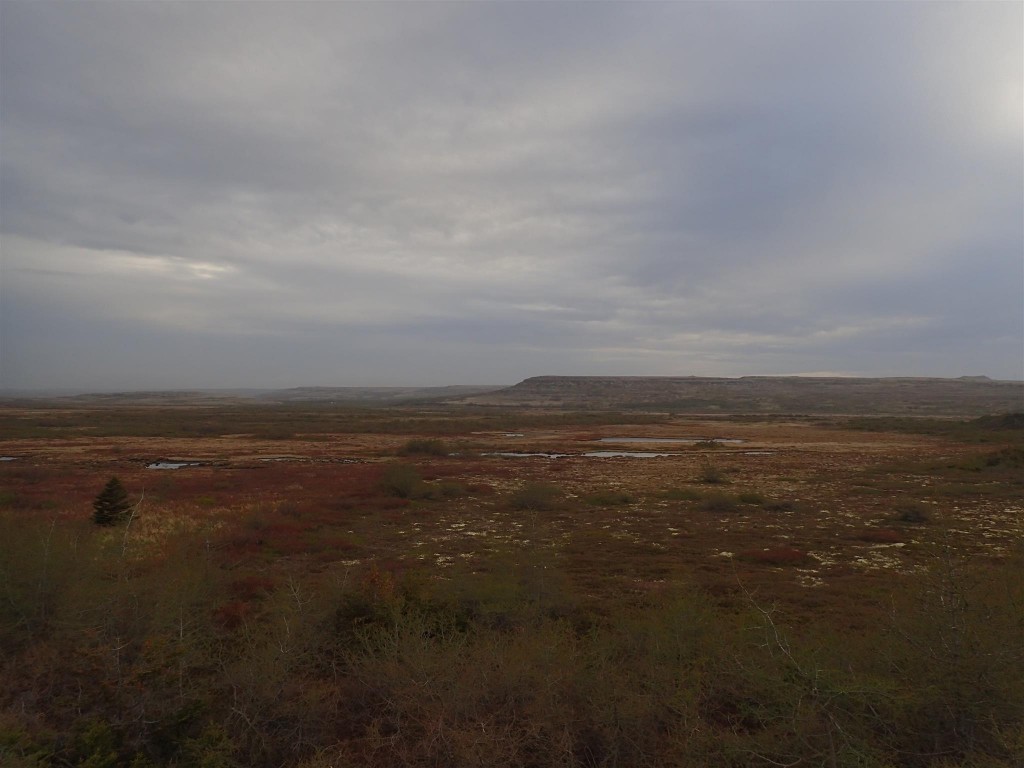 I woke up early the next morning to try and get my flattening tire situation sorted out.  With nobody to help in the desolate Blanc Sablon, and it being a Sunday when just about everything is closed, I was hovering around 20 PSI when I boarded the ferry for Saint Barbe.

At the gas station in Saint Barbe, I attempted to patch the leak.  The ladies at the counter called their friend over to help me, who couldn’t help but comment about my heavy duty saltwater fishing rod that was riding shotgun.  I explained I had been looking for someone to take me out fishing around Rocky Harbour, but had given up because everyone was fishing for lobster.  He told me to just keep calling and assured me somebody would take me out.  We applied some canned tire sealant and I was on my way back to Gros Morne. 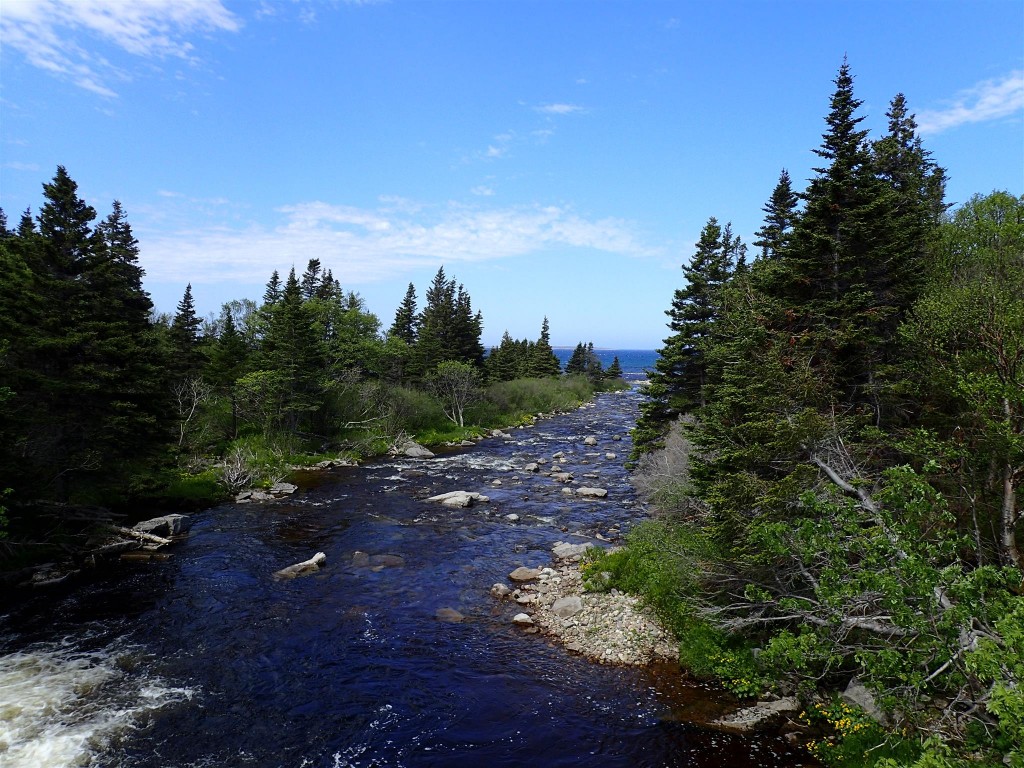 I stopped by some salmon rivers on my drive, but didn’t see any salmon running yet.  There was the odd person fishing though. 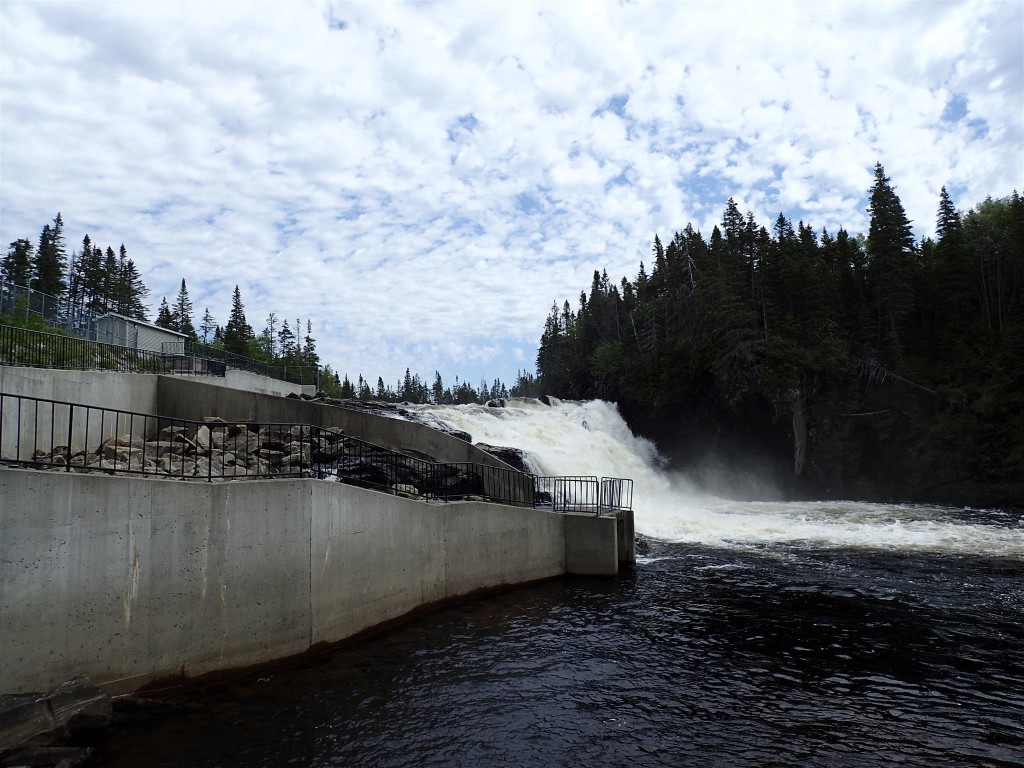 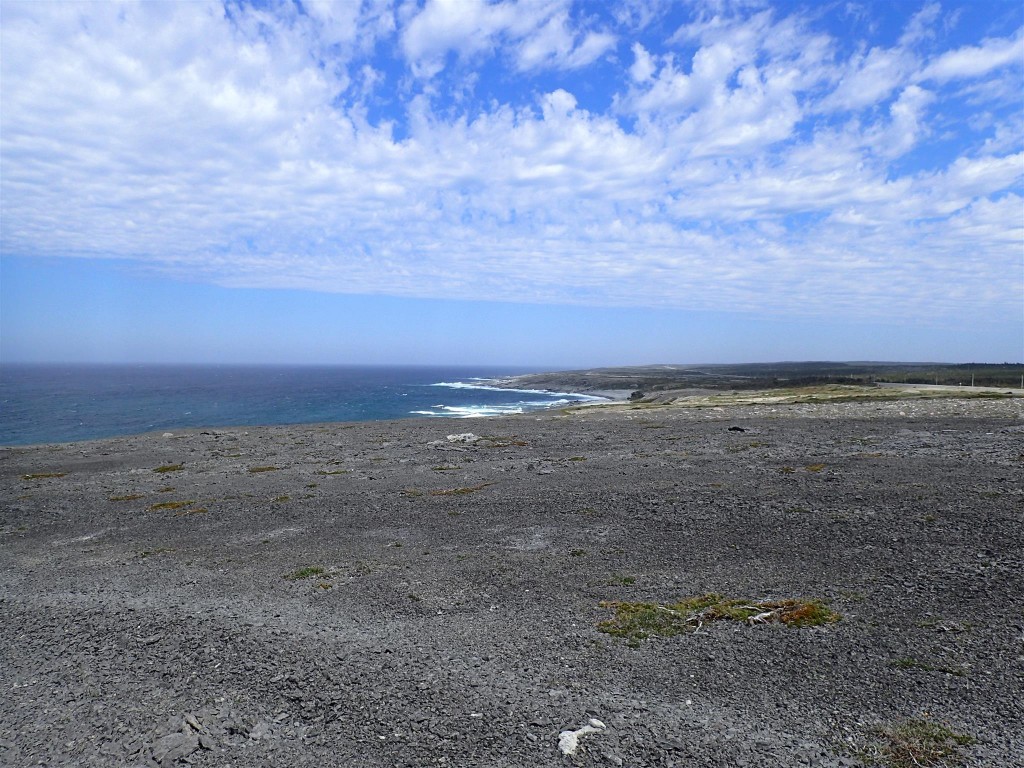 When I arrived at Rocky Harbour I started asking and calling around once again for someone to take me out to sea.  The man at the gas station had assured me someone could get me fishing if I kept trying.  Call after call, I reached the owner of a boat tour company and explained yet again that I simply wanted to get out to some deep water to catch and release whatever fish I could find.  He said yes, we agreed on a price, and set a time for tomorrow morning.

I stopped by the fish market in Rocky Harbour to get some shrimp and then the Gros Morne Visitor Center once again to buy a park pass I’d need for some coming hikes.  As I strolled through the gift shop, I thought this book was a fitting find: 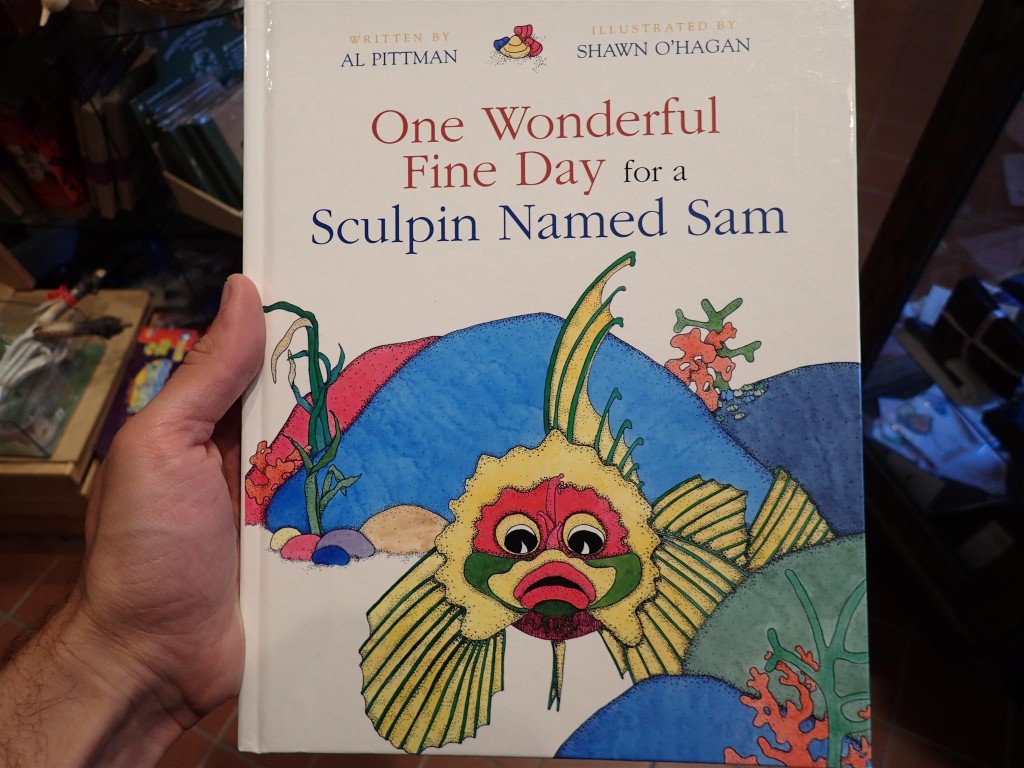 I bet you Sam was a shorthorn sculpin.

I called my boat charter to inform him the winds looked great, that I wanted to meet earlier in the morning, and that I had freshly frozen shrimp as bait.  After my call was done the lady at the gift shop exclaimed  “You’re making me hungry!”.  I laughed and asked why.  She explained she had heard me talking about fresh shrimp.  Then she asked me if I had ever tried capelin.  I told her no, but I’d love to catch one!

“There were millions of them in Trout River yesterday!”

Could it get any better?  She gave me a number to call for an ocean-side restaurant in the town of Trout River to ask if the capelin were still there. The capelin were rolling in the surf and I suddenly knew exactly where I was headed this evening.

Before I’d try for capelin, I had some other plans.  I’d finish my sightseeing in the northern end of the park with a hike to the base of Gros Morne mountain.  The summit was under seasonal closure for nesting birds, but just the hike to the base was long enough. 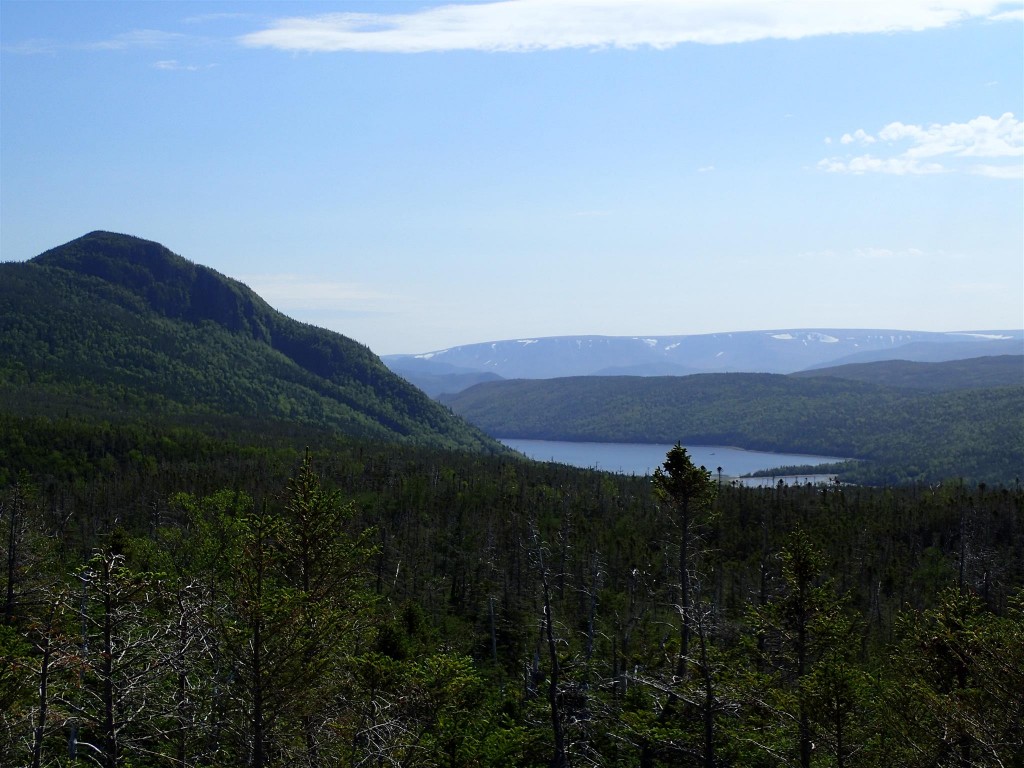 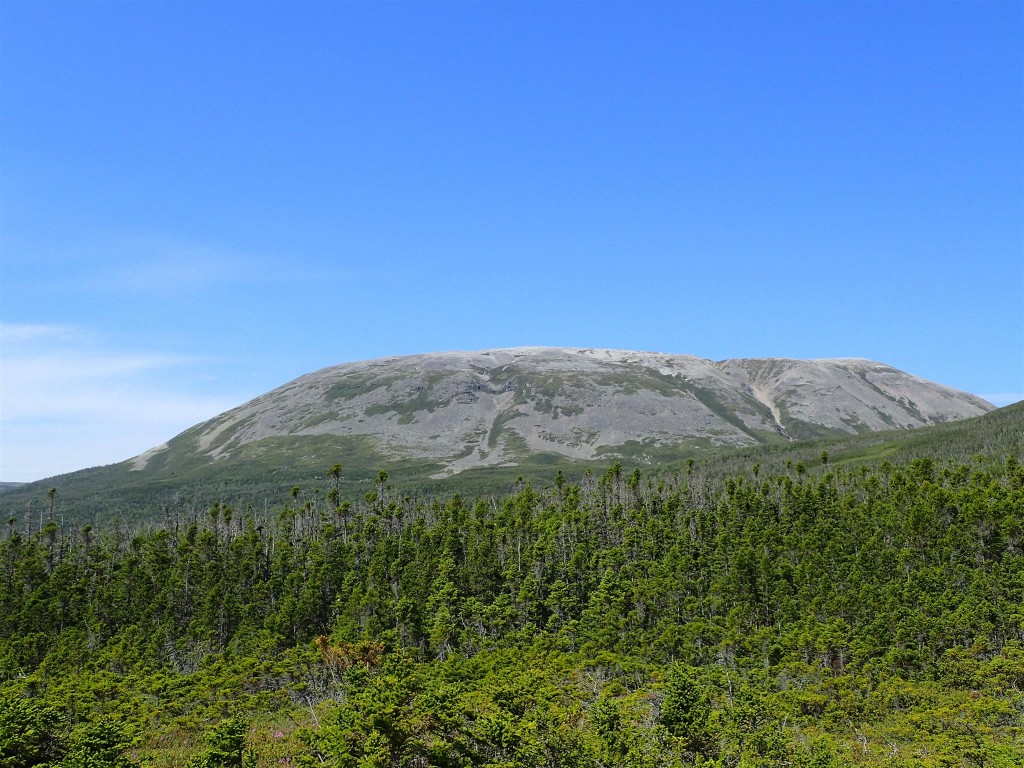 I spooked a brook trout in this small stream along the trail: 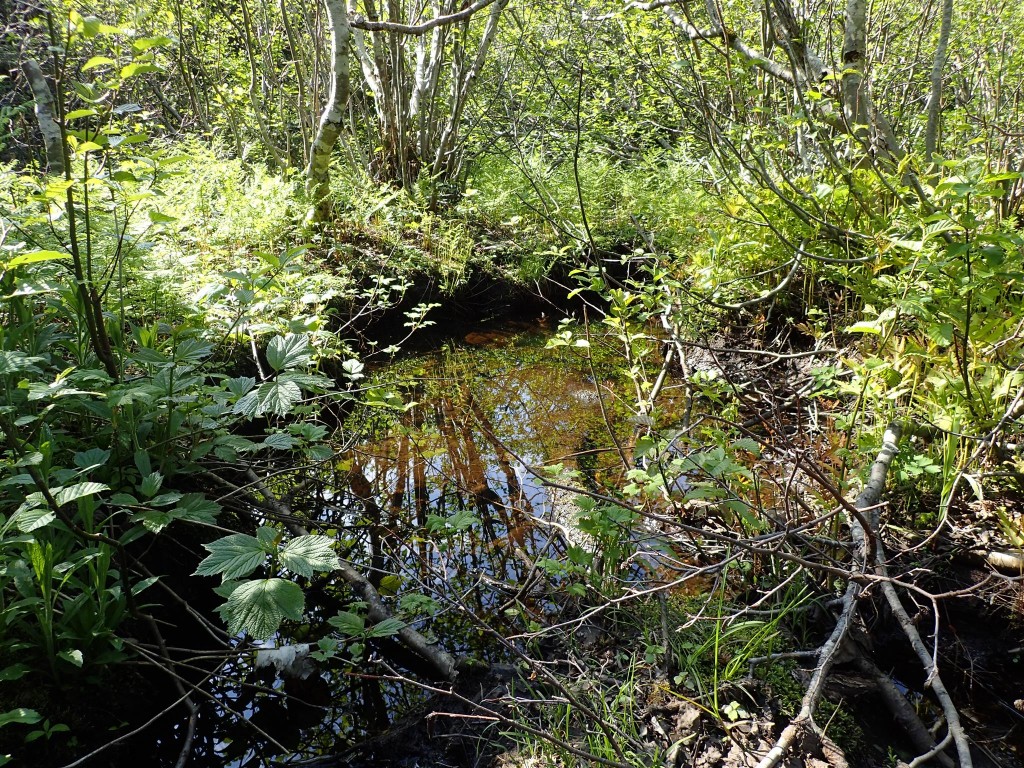 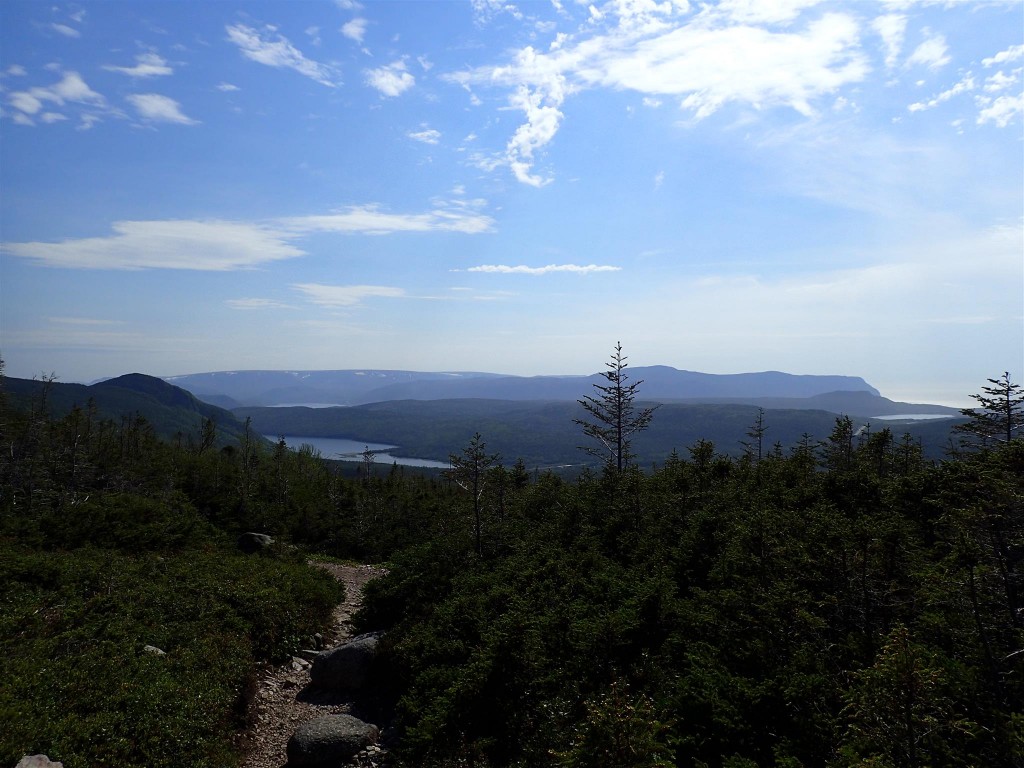 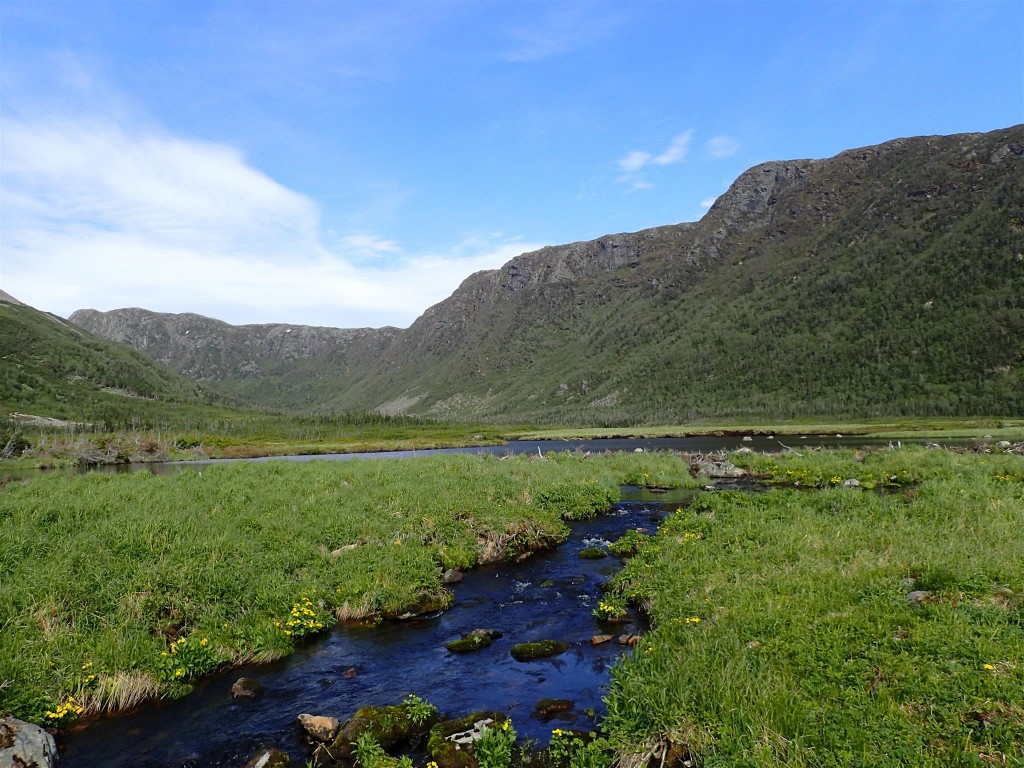 I fished around and wasn’t too surprised at what I found. 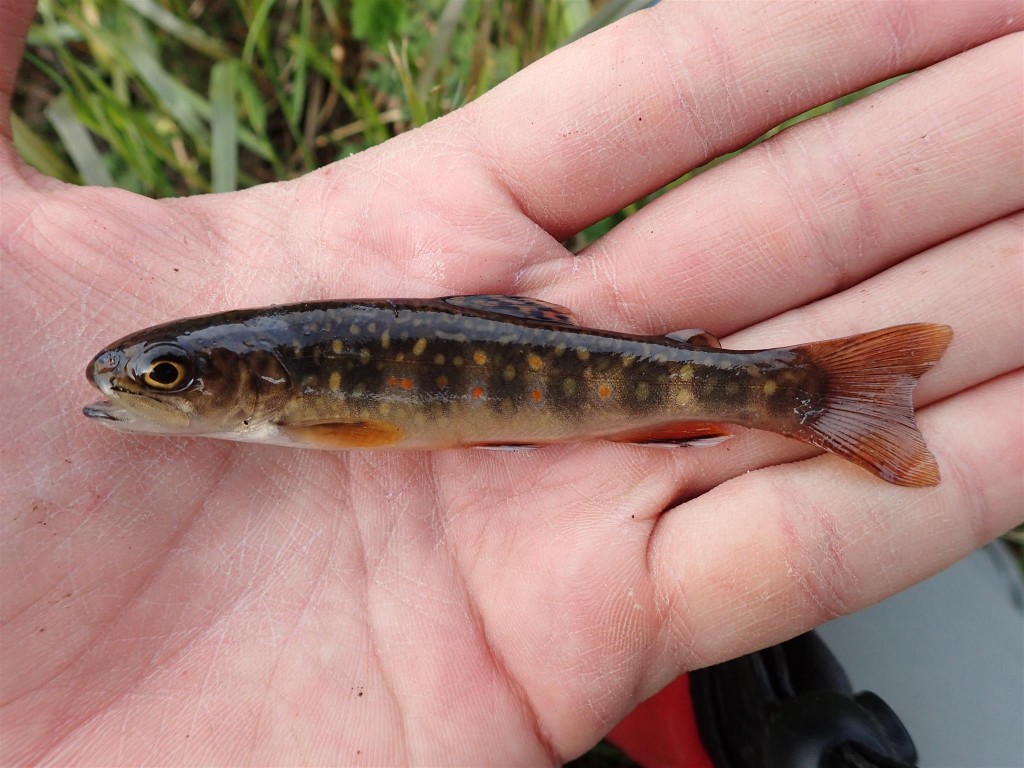 I also fished under the rocks and pockets of the streams, but didn’t find anything other than brook trout. 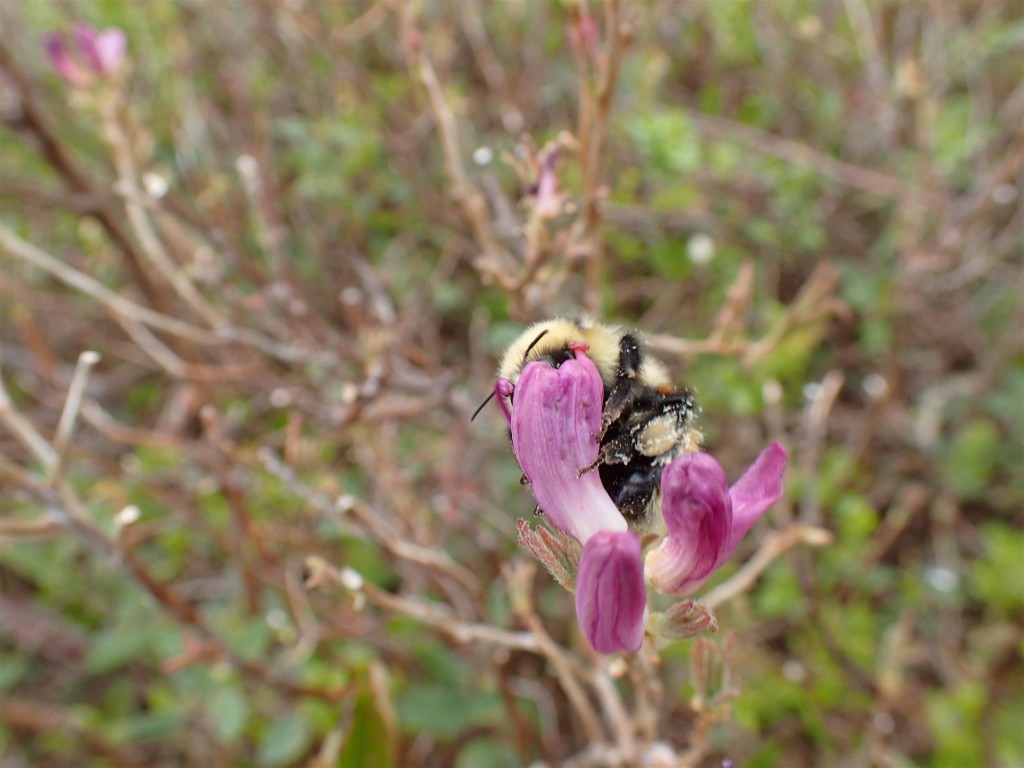 The hike to the summit didn’t look like any fun anyways.  I’ve never really been a fan of hiking. 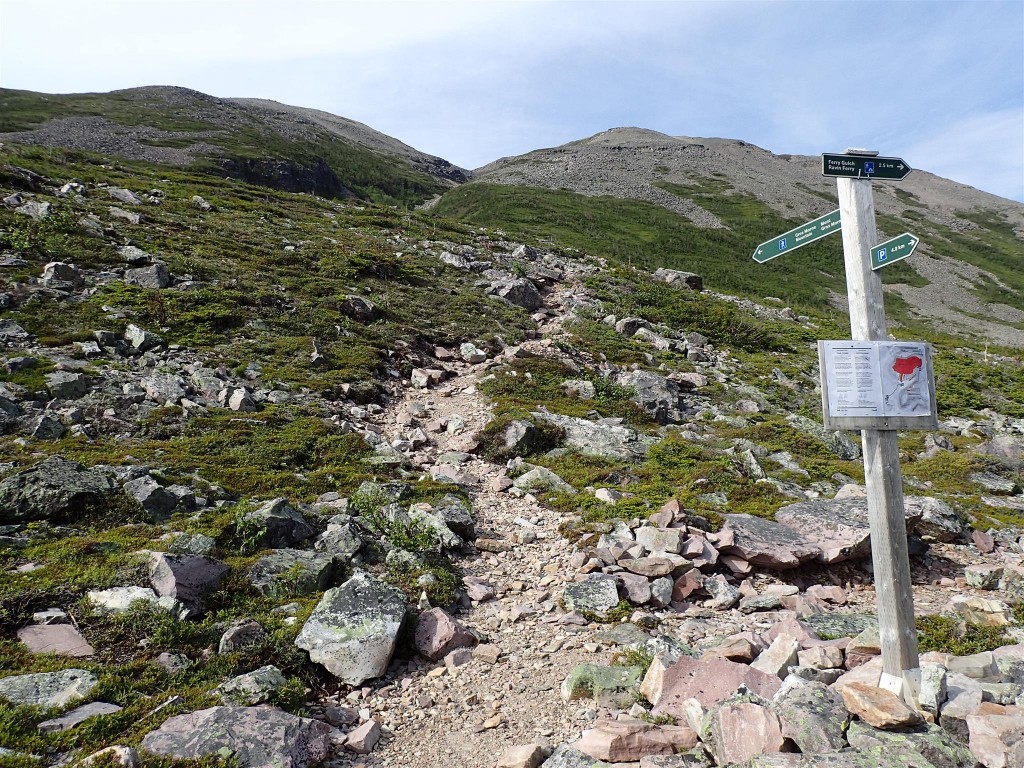 With that, I made my way through the park to the Lomond campground on the other side of Bonne Bay.  Along the way was the highest point accessible by road.  It made quite the impression. 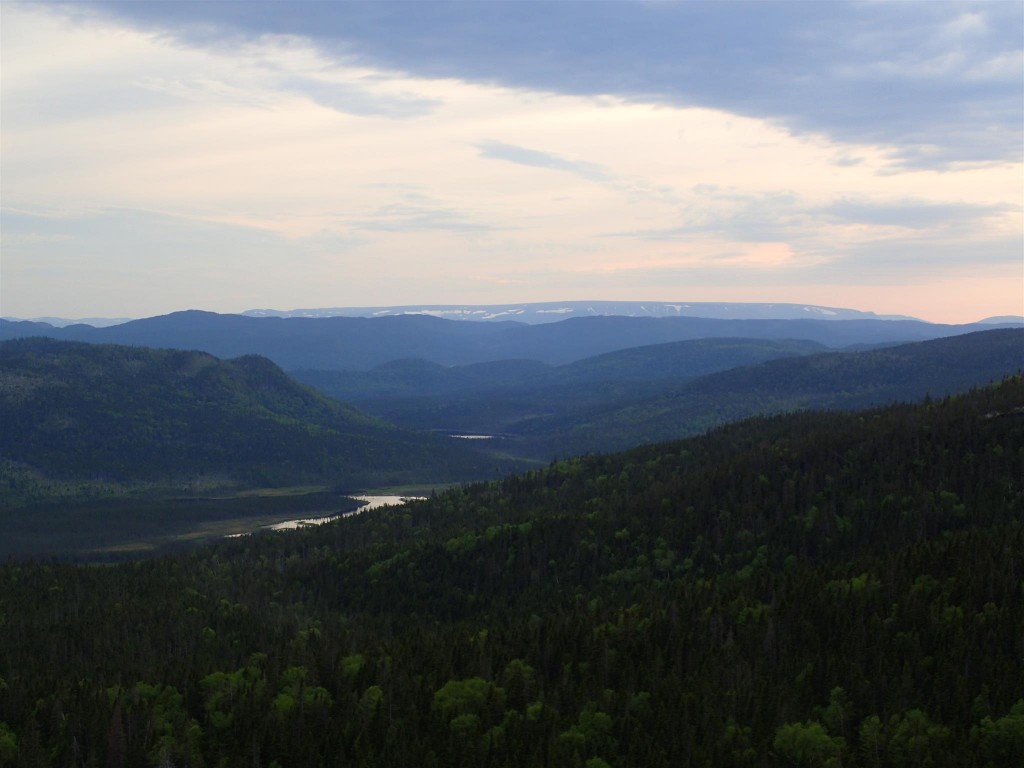 Across the street I found a well-coloured brook trout. 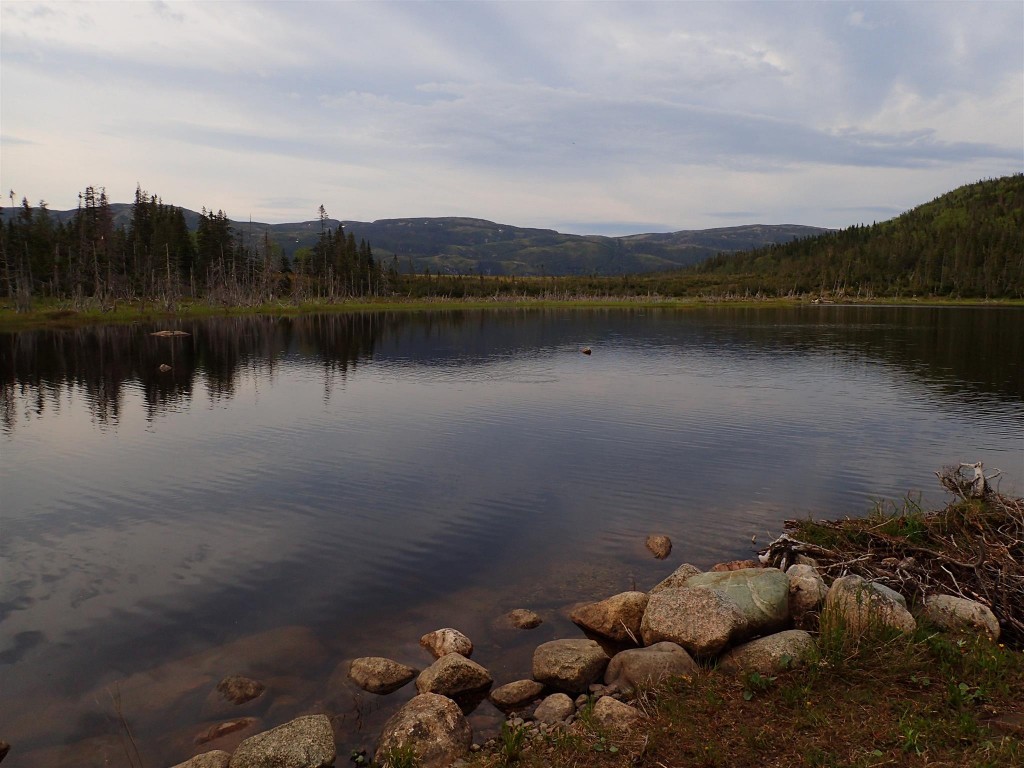 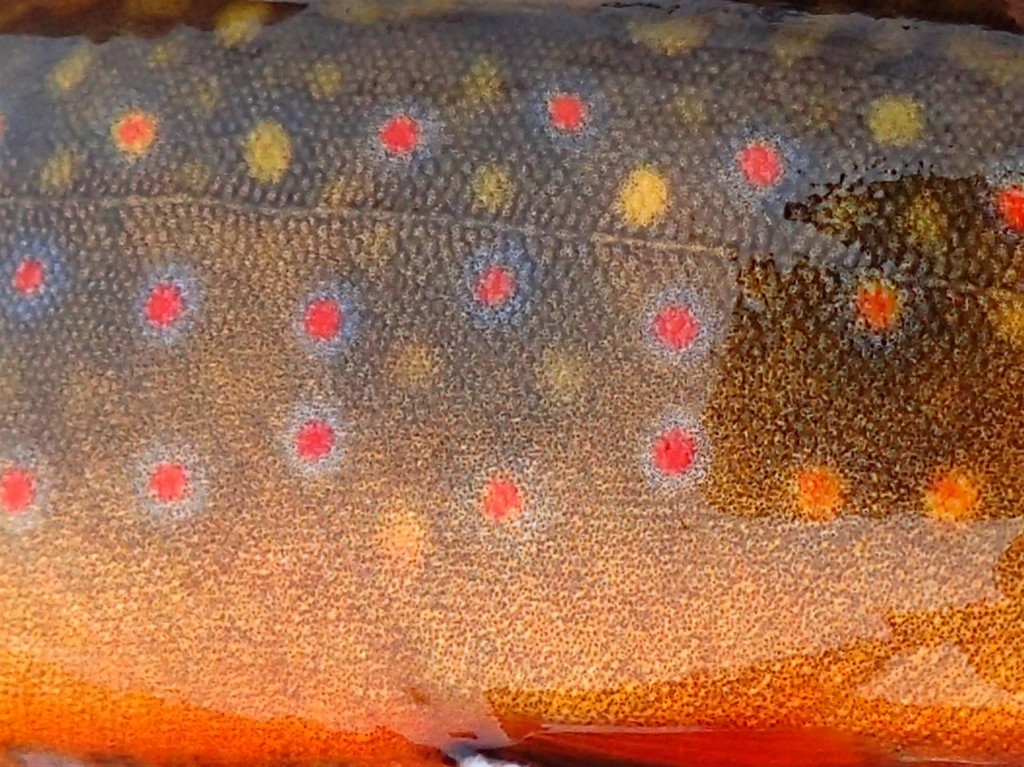 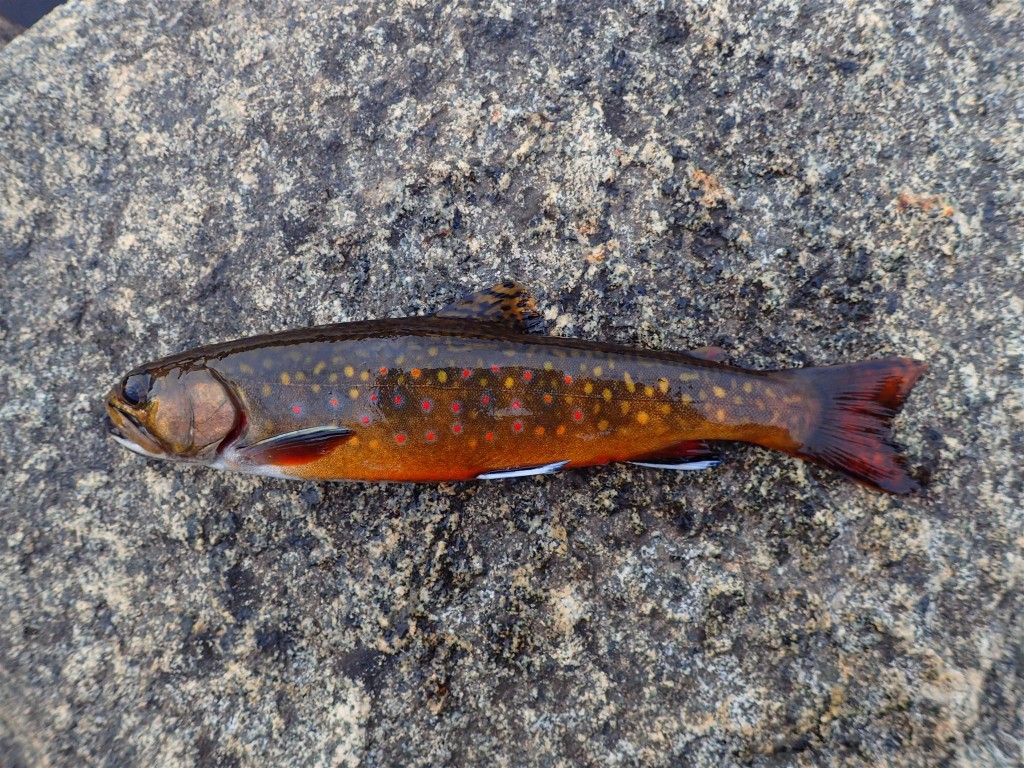 Arriving at the Lomond campground, passing two moose, I immediately began fishing rock crevices for rock gunnell. Ken had found there to be an abnormally high number of them here on his trip last year and had shared the location with me. 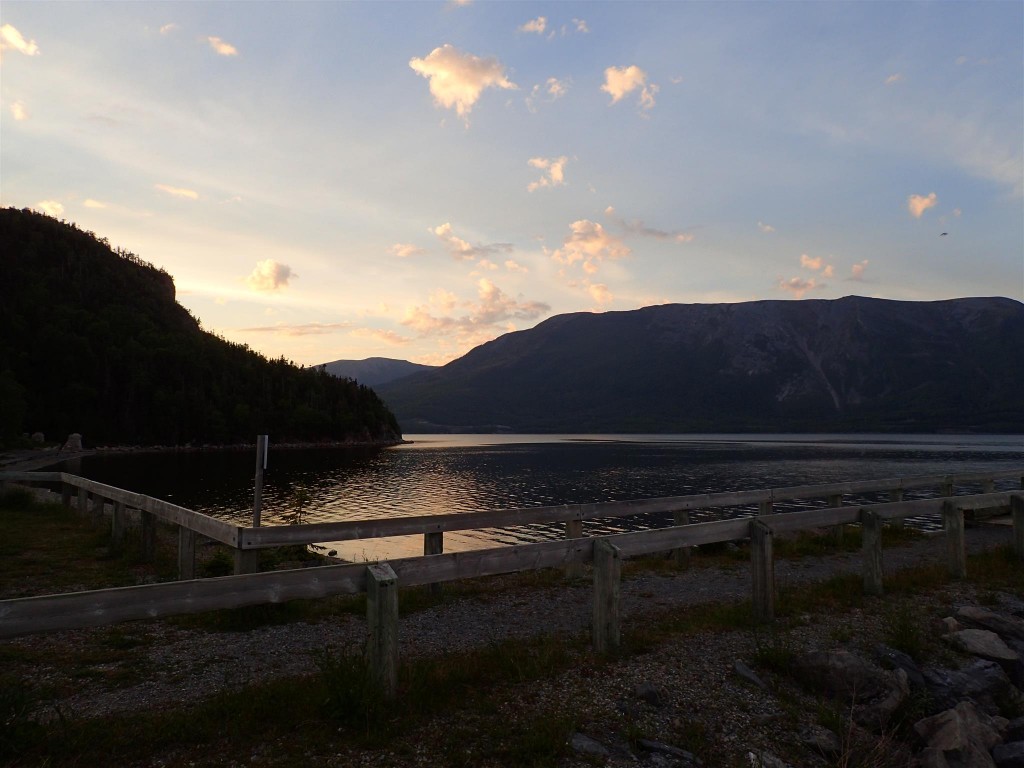 After some poking and prodding, the sun began to set and I was running out of time.  I still hadn’t gotten any bites in the rocks except for one small cunner.  Then, as I fished a crevice between two rocks, I felt some nipping.  I pulled up and saw a thin, brown, eel-like fish squirm out of the water, soar off my hook and fall back into the water.  Ugh.   I fished on.

As it got dark, I turned on my headlamp and wondered if I could target these rock gunnel as Ken and I had targeted eels in Hawaii.  The eels in Hawaii weren’t scared of light and it turned out that the rock gunnel weren’t either.  I spotted two of them poking their heads out of the rocks and dropped baits to them.  I lost both fish and didn’t spot any more.

Defeated, I made the drive over to Trout River.  Perhaps I could redeem my night with a capelin.  I took a few steps along the beach and switched my light on.  This is what I saw: 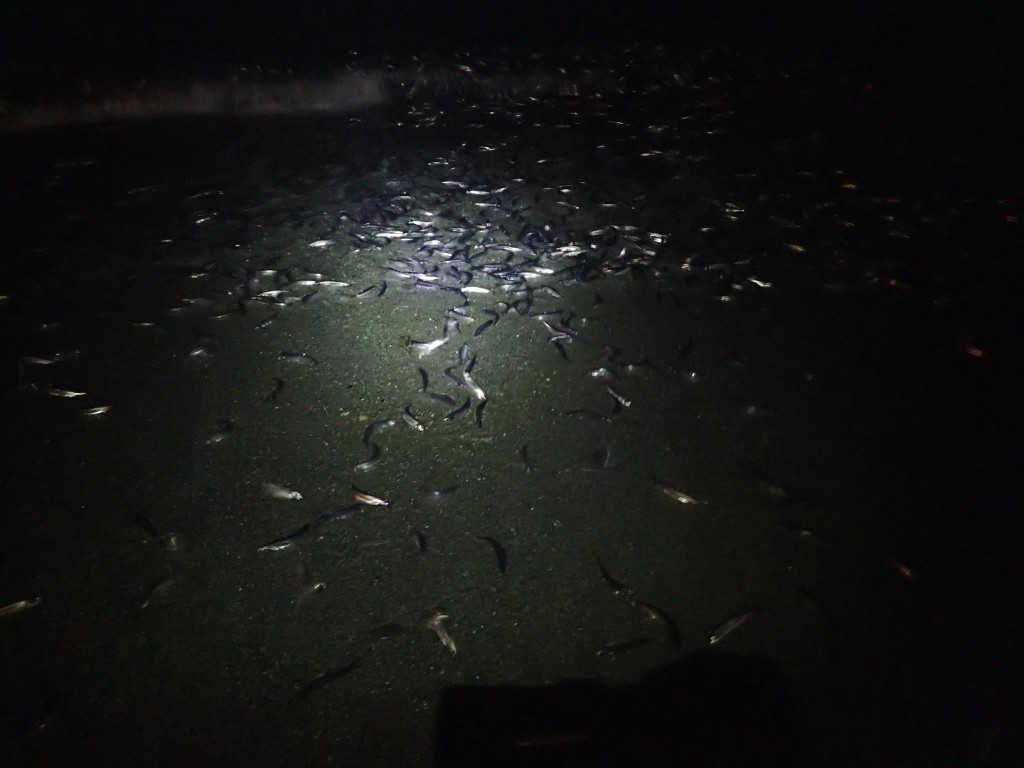 Amazed, I fished a small spinner nice and slow along the edges of the school, but this was all that happened: 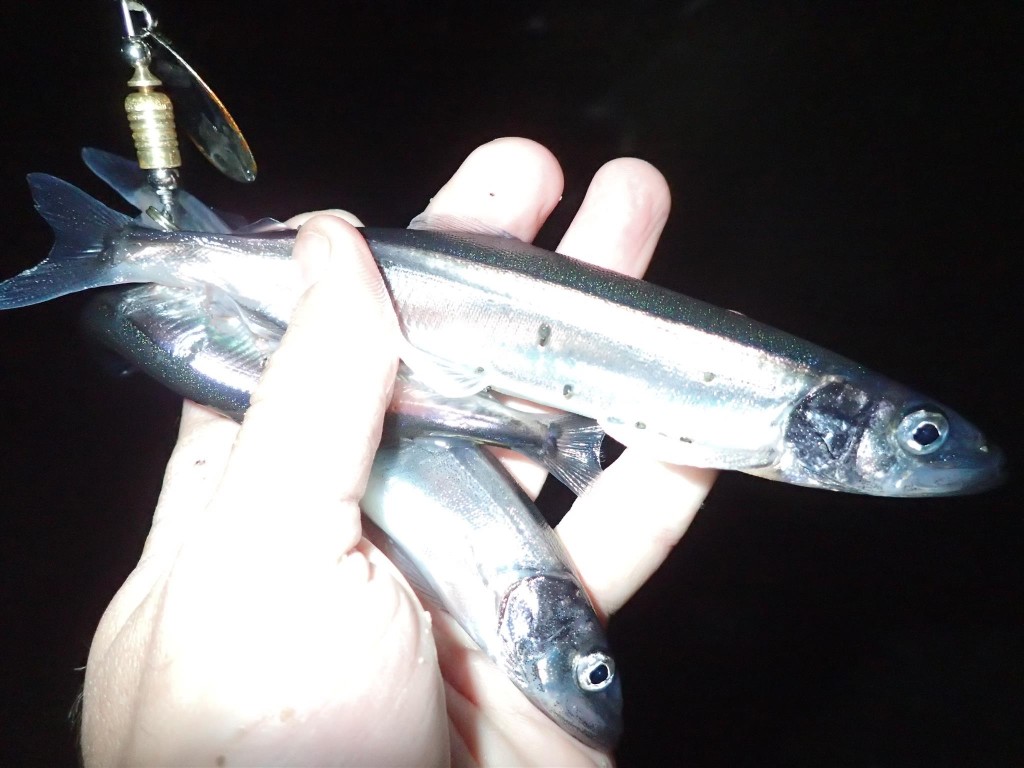 I switched to a tiny hook and a bit of shrimp on light line, but they snagged just the same.

I collected a bunch of them for bait to use tomorrow on the boat, as I was certain they’d be prime.  As I continued to work the school I found it curious that the odd one would be hooked on the snout.  Perhaps the odd one was giving chase.