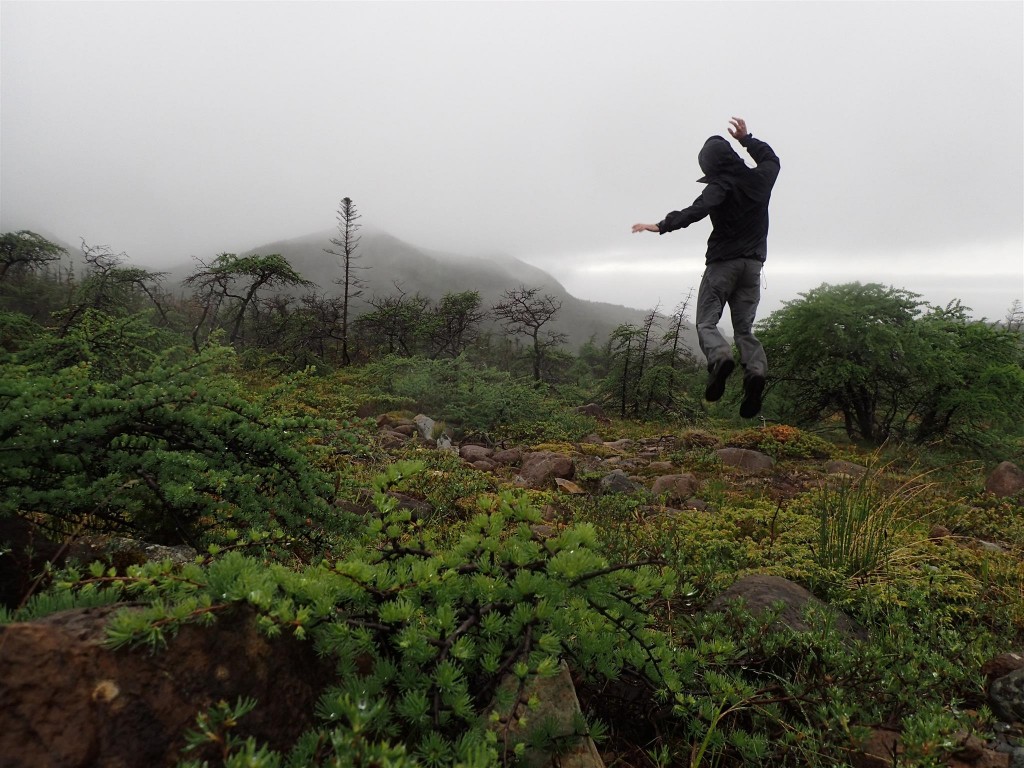 Back at the car, I wasn’t really sure how to spend the rest of my time.  My flight left tomorrow in the late morning.  I still had capelin and blackspotted stickleback to catch.  It was raining over in Trout River, but as I looked in the other direction I saw blue skies.  Ken had found his willing blackspotted sticklebacks along a pier.  I drove around the local wharfs in search.

While I didn’t find any more sticklebacks, I found a school of sand lance that was extremely skittish.  I hadn’t a chance at catching one of those, so I moved on.

Eventually, I reached an area where fisherman had dumped what seemed like a bunch of dead herring in the shallow water.  There were plenty of sculpins and cunner around as usual, but also some flatfish.  I tried and tried to catch the flatfish, but just couldn’t make it past the endless hoards of other fish. 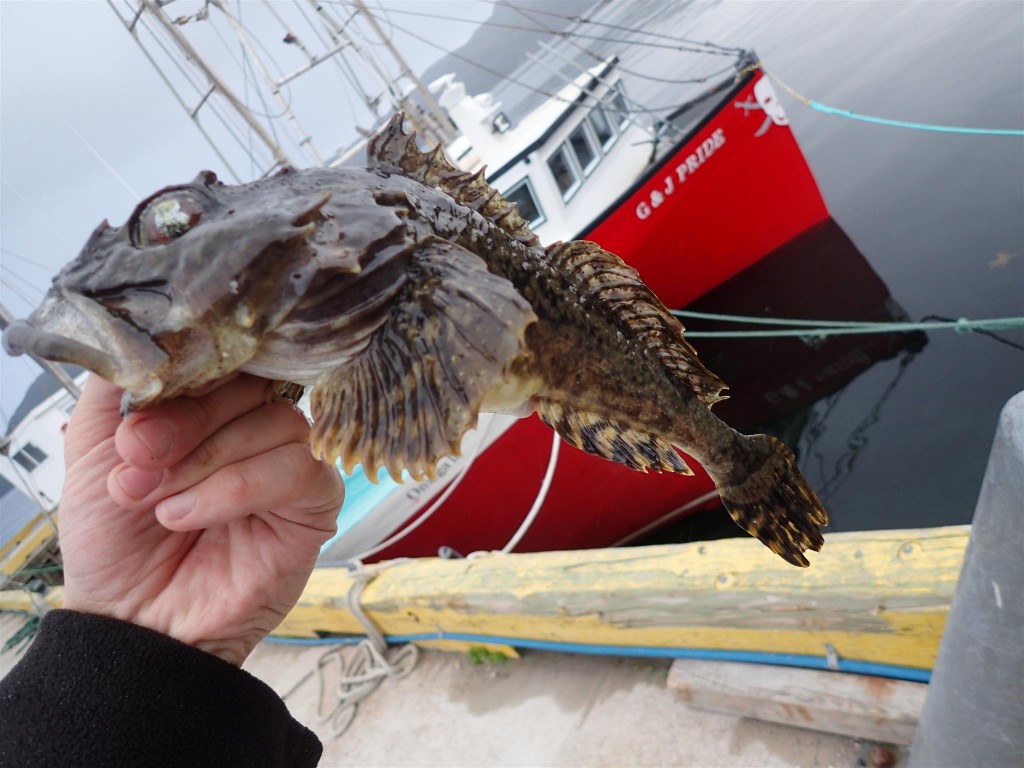 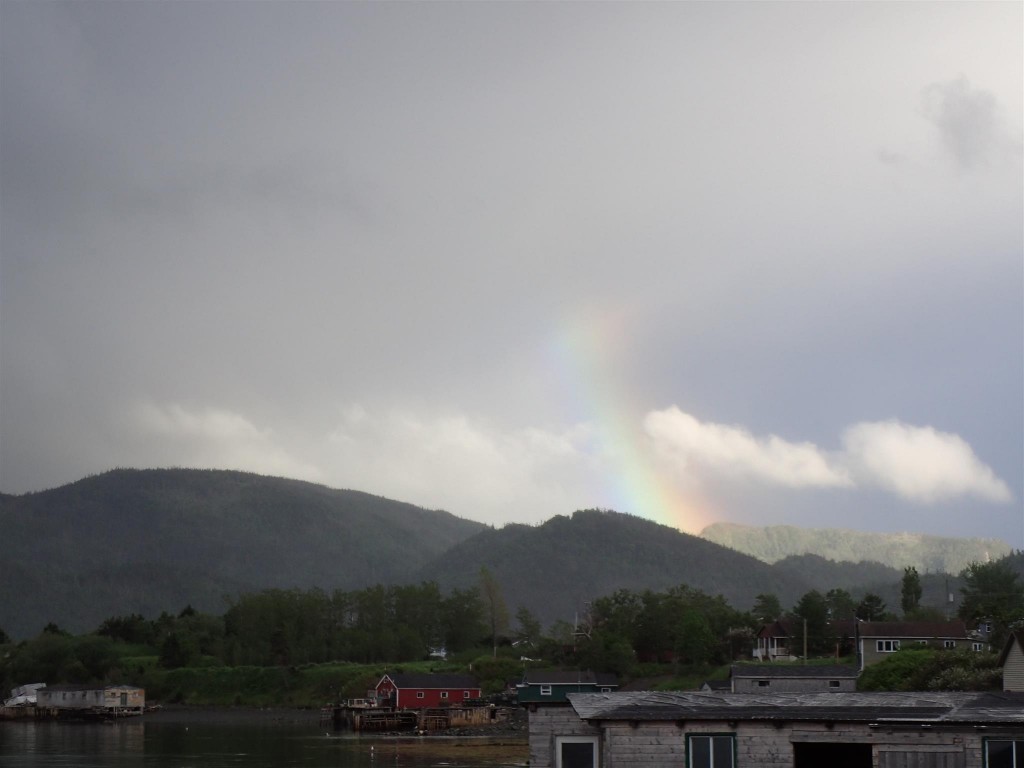 I opted to fish the wharf that had been suggested to me by the fisherman I had spoken to yesterday.  Daydreams of a halibut seeped into my mind.  Of all the amazing sights this trip had led me to, a halibut would certainly be the cherry on top.   The tide was rising and I still had plenty of capelin, so out they went on 6 oz. of lead and 3/0 hooks.  Alongside this, I was fishing smaller size 8 hooks with little chunks of capelin.

While the little chunks were ignored, I had some steady action on the bigger rod.  I was catching a mix of Atlantic cod, Greenland cod, and, of course, shorthorn sculpin. 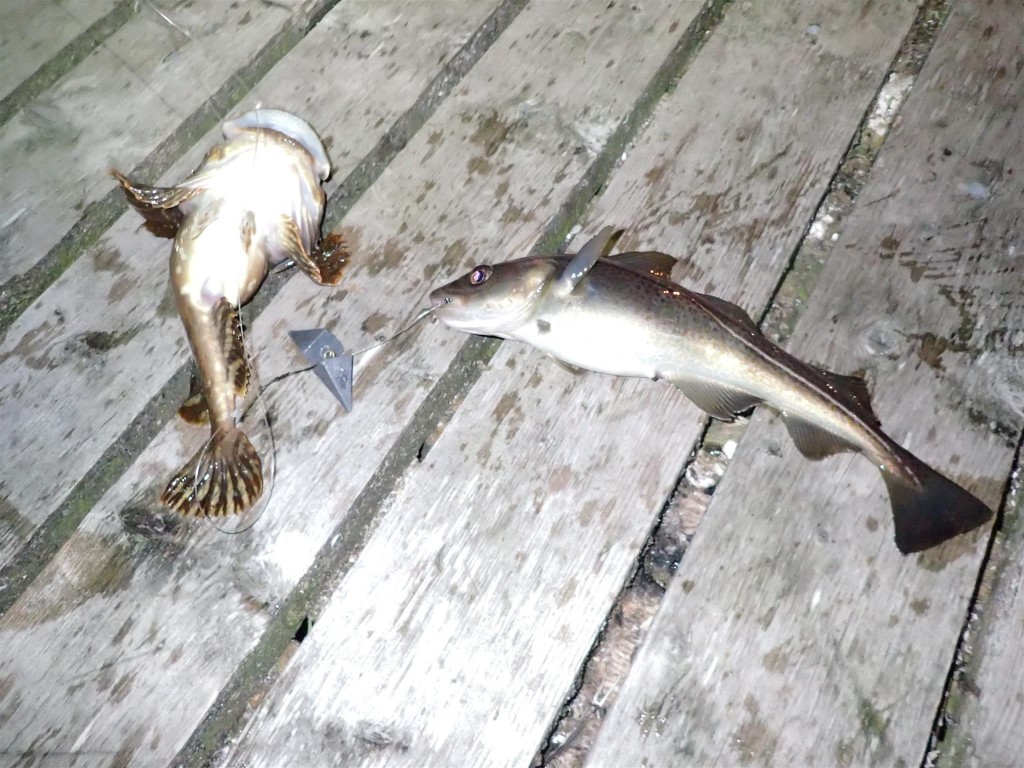 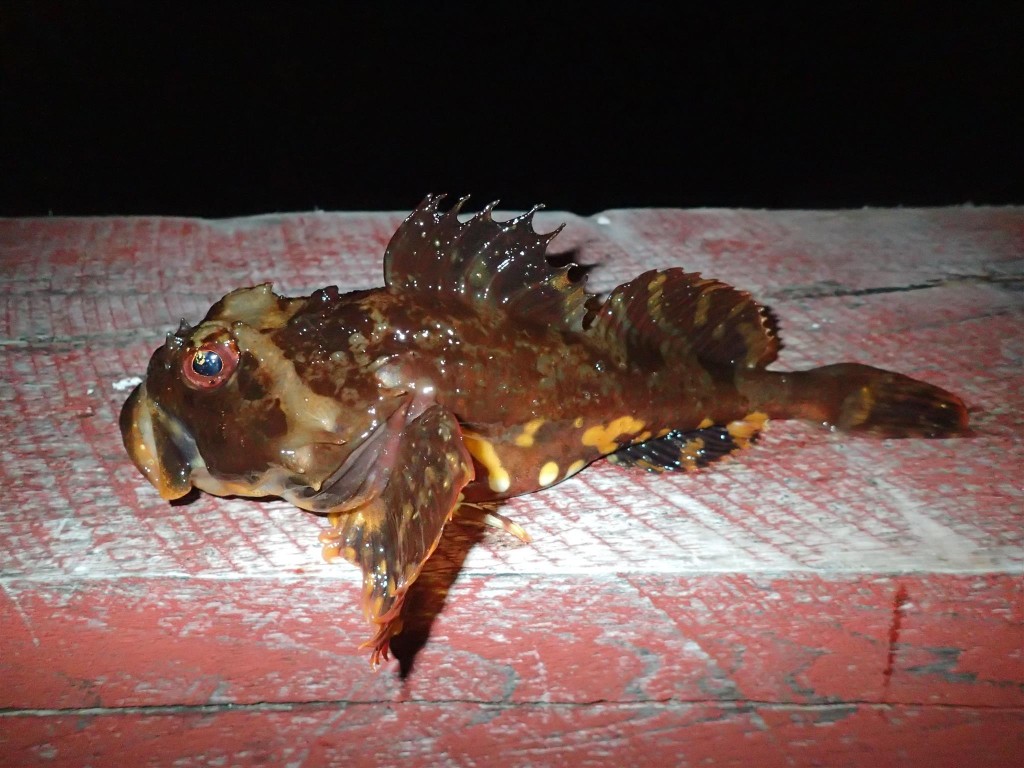 As the night grew darker, I also caught some assorted marine life. 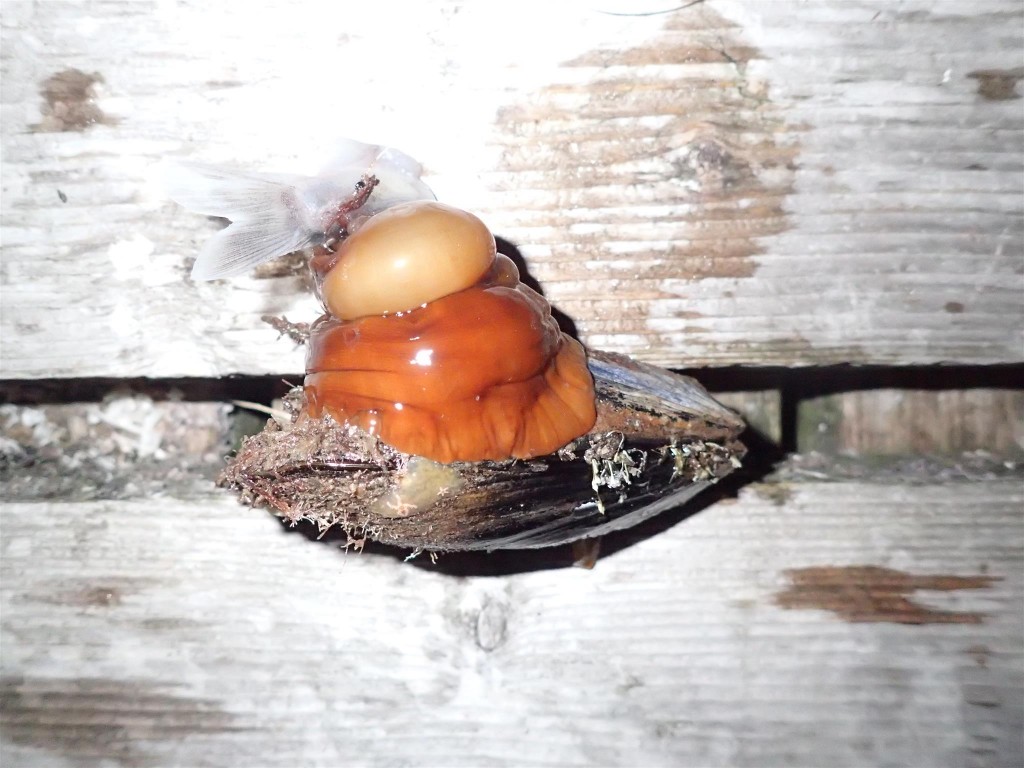 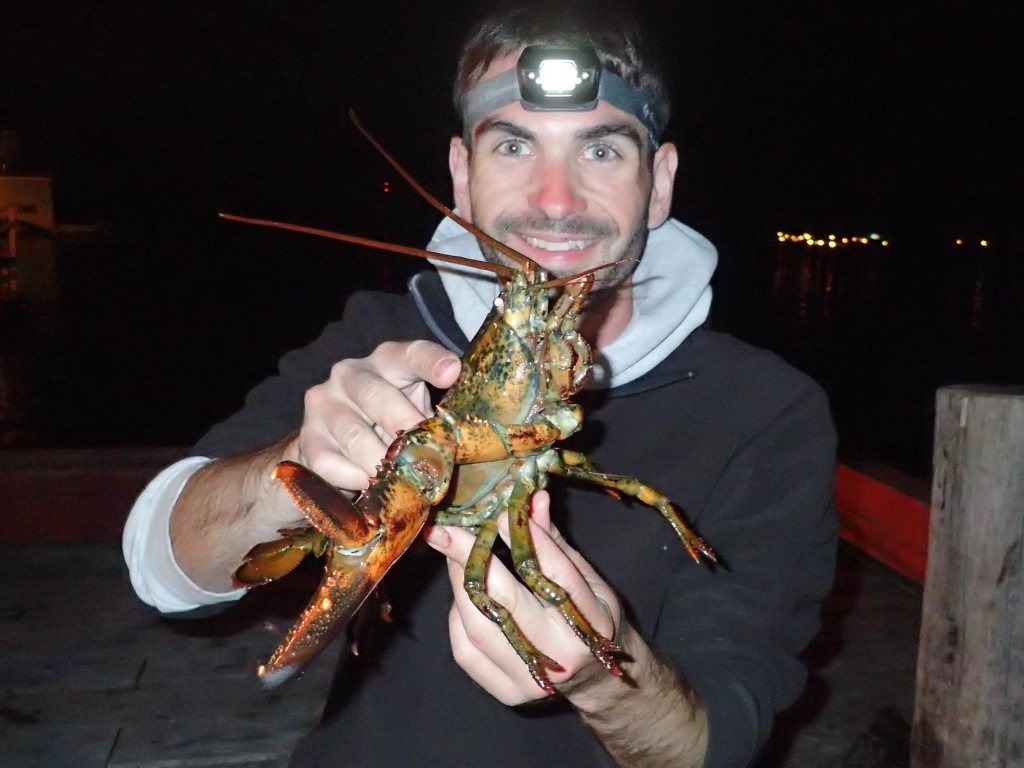 That lobster had taken my number 8 hook.  I didn’t have anything to cook him in so I gave him to a local who had seen the commotion.  This local just happened to be the tour boat operator who had taken me out the previous day, small town!

It was a nice night out, so I rebaited my rods with my last pieces of capelin and took a nap on the wharf.  When I woke, tide was at an almighty high.  I checked my rods and found something much cooler than expected. 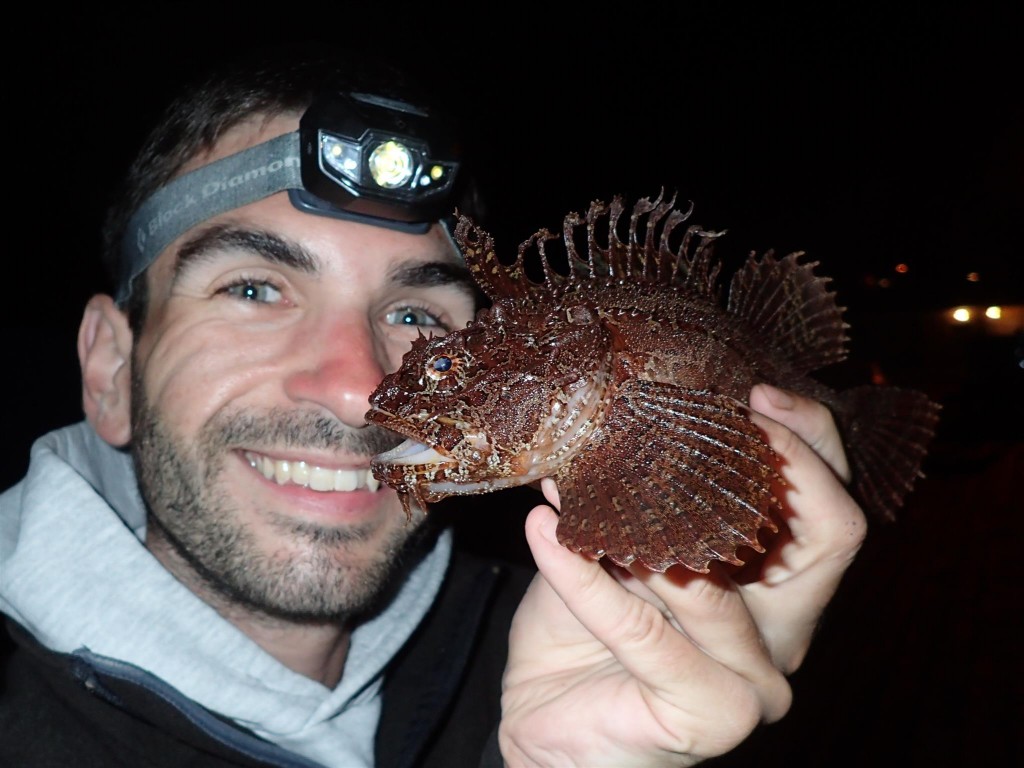 A quick flip through Peterson’s guide revealed him to be a sea raven! 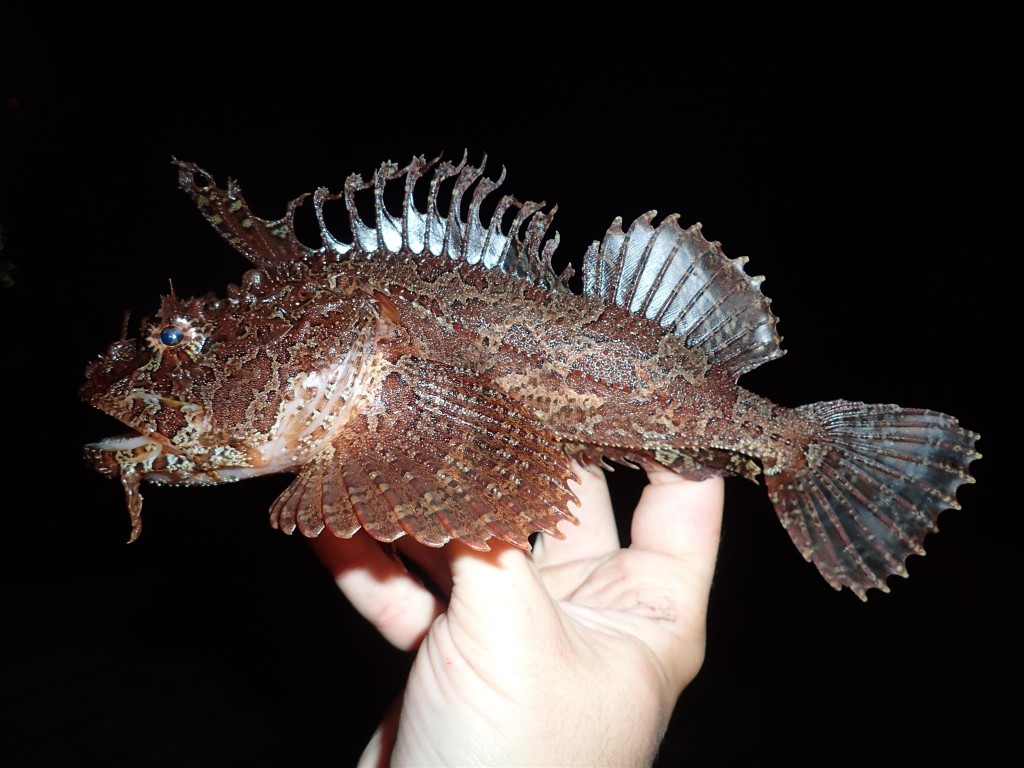 It was the middle of the night and I was all out of capelin.  I had just caught something different at a spot where I could catch Atlantic cod from the shore.  I remembered asking that fisherman about halibut and I remembered his advice much too clearly.  There was not a chance I was giving up now!    I decided to drive back to Trout River to grab some more capelin. 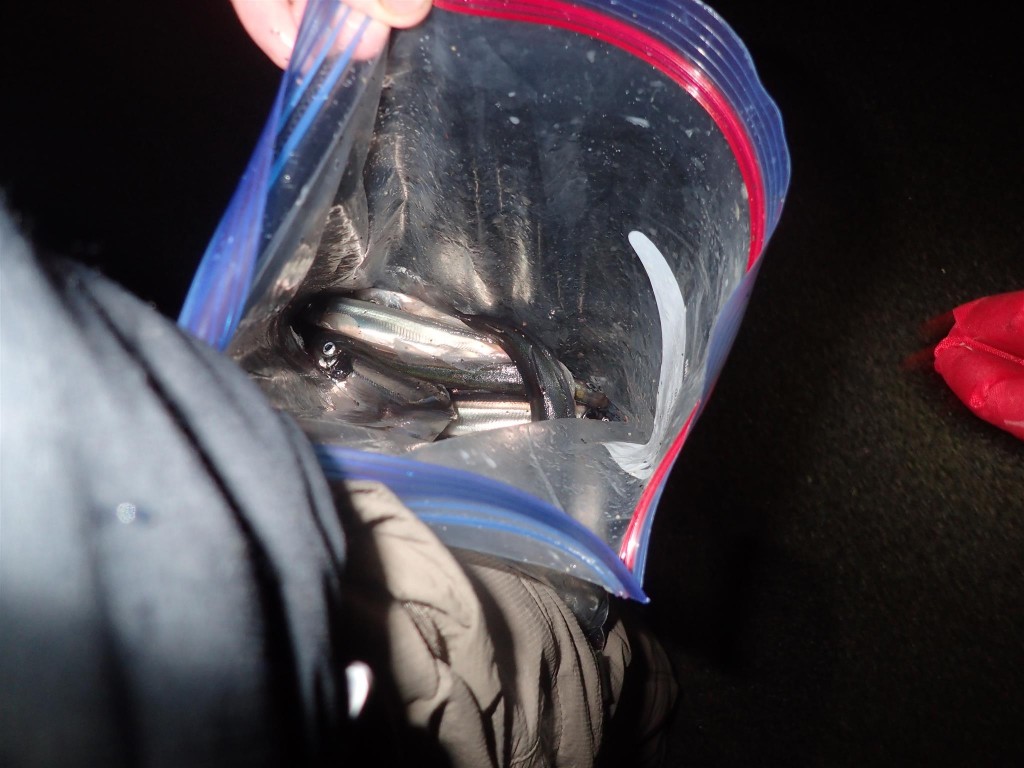 This time, the capelin weren’t in as thick.  I continued to work my spinner as slow as possible along the edges of the school and snagged the odd one here and there.  One or two were on the snout.  Finally, I saw this! 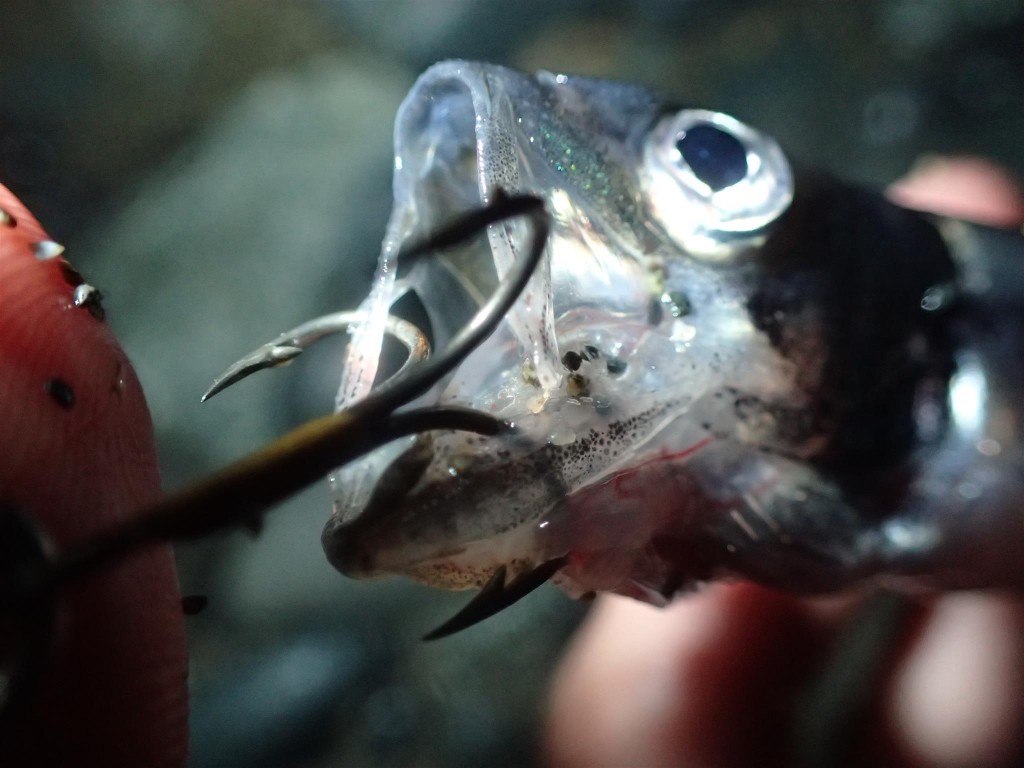 One of the prongs of the treble hook entered the lip from the inside of the mouth and exited in the proper direction!  Even though the other prong was lodged in the outside of the opposite lip, this looked like a completely fair hooking to me! 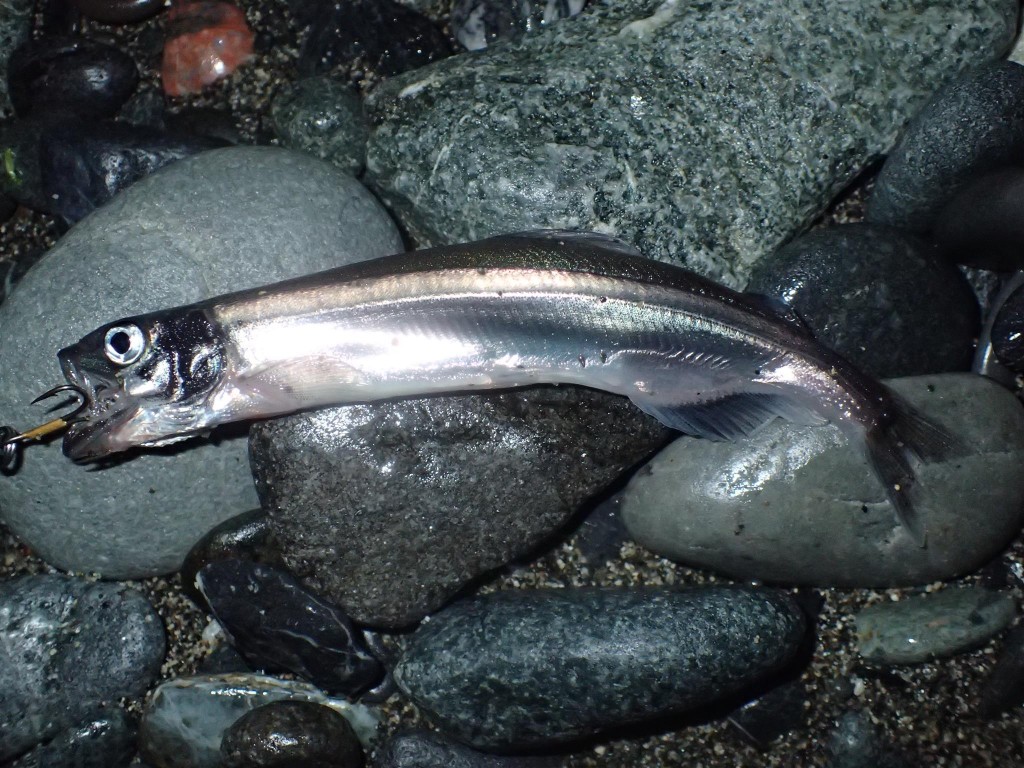 Dreams of halibut lingered, and I returned to my previous spot with the freshest bait possible.  The first fish that came topside was another new species! 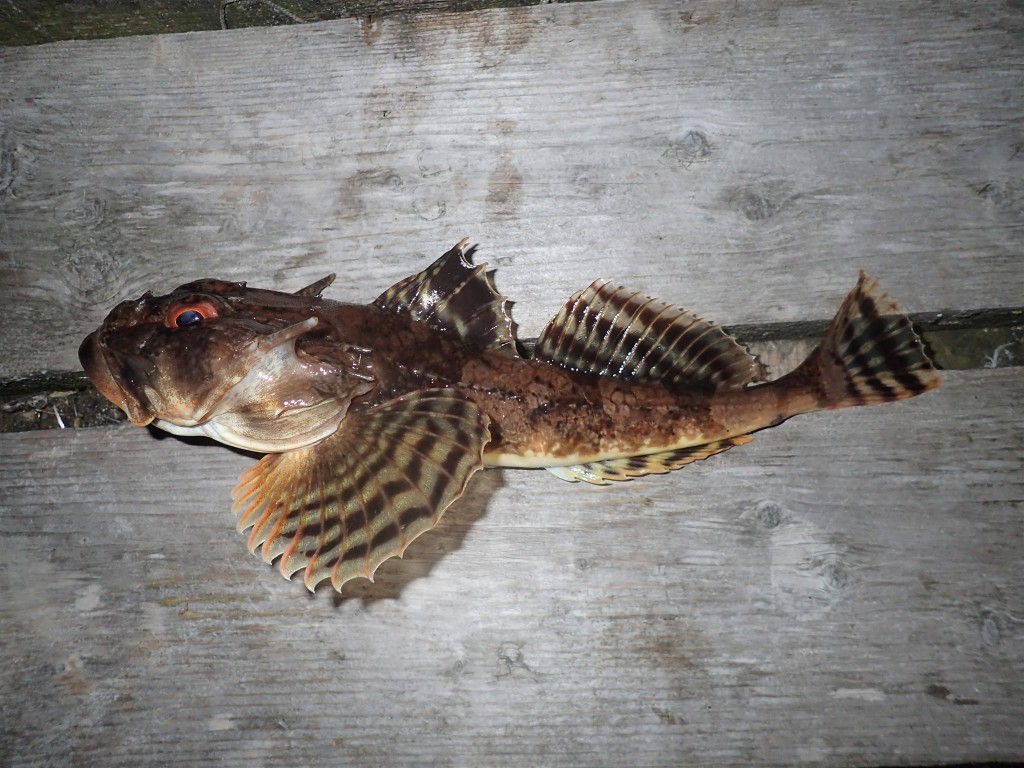 At this point, the tide was falling.  I caught a lot of cod and shorthorn sculpin, most of them coughing up these peculiar blue sand worms. 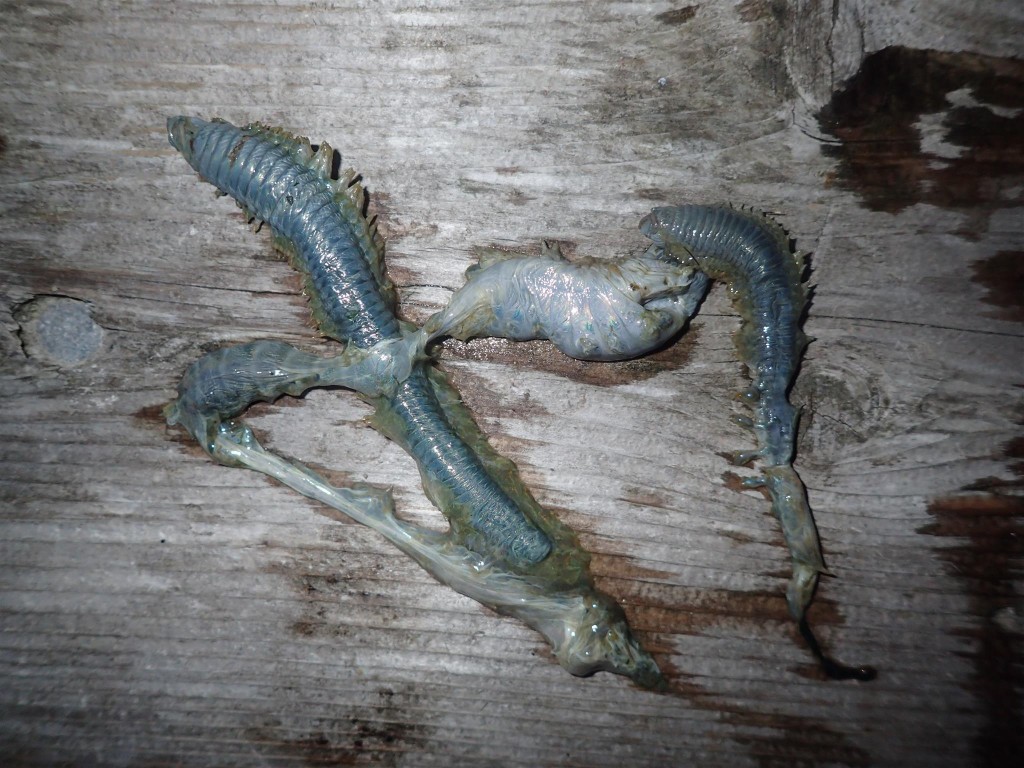 As daylight crept through the clouds above, a bigger Atlantic cod gave my rod a nice bend. 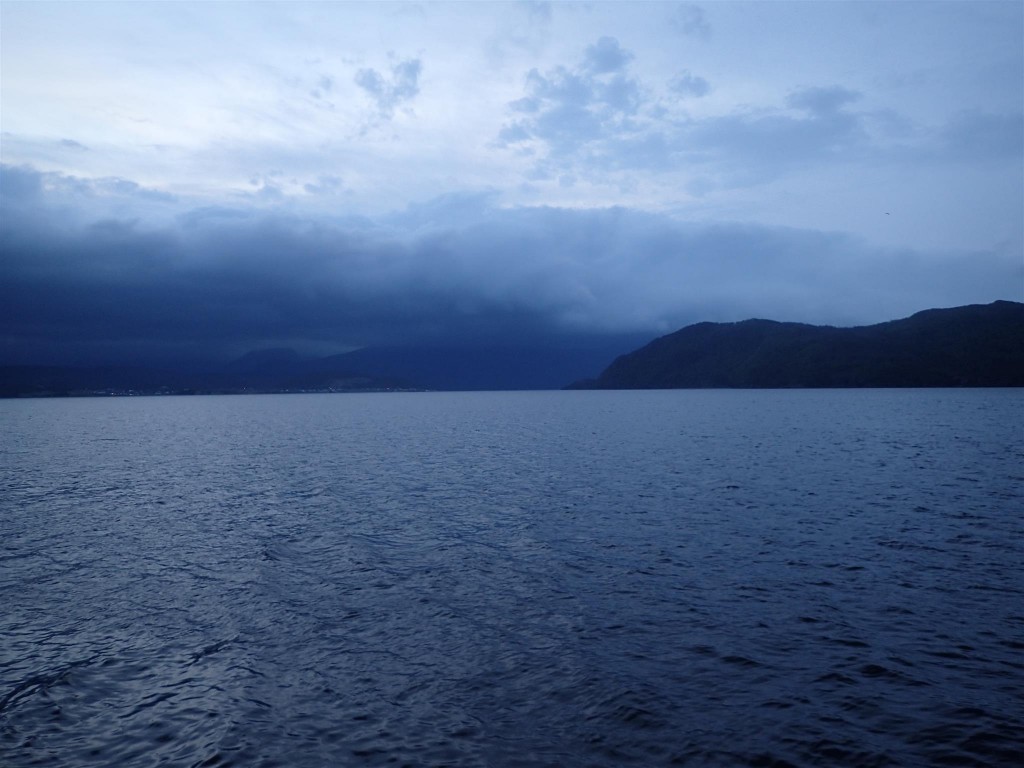 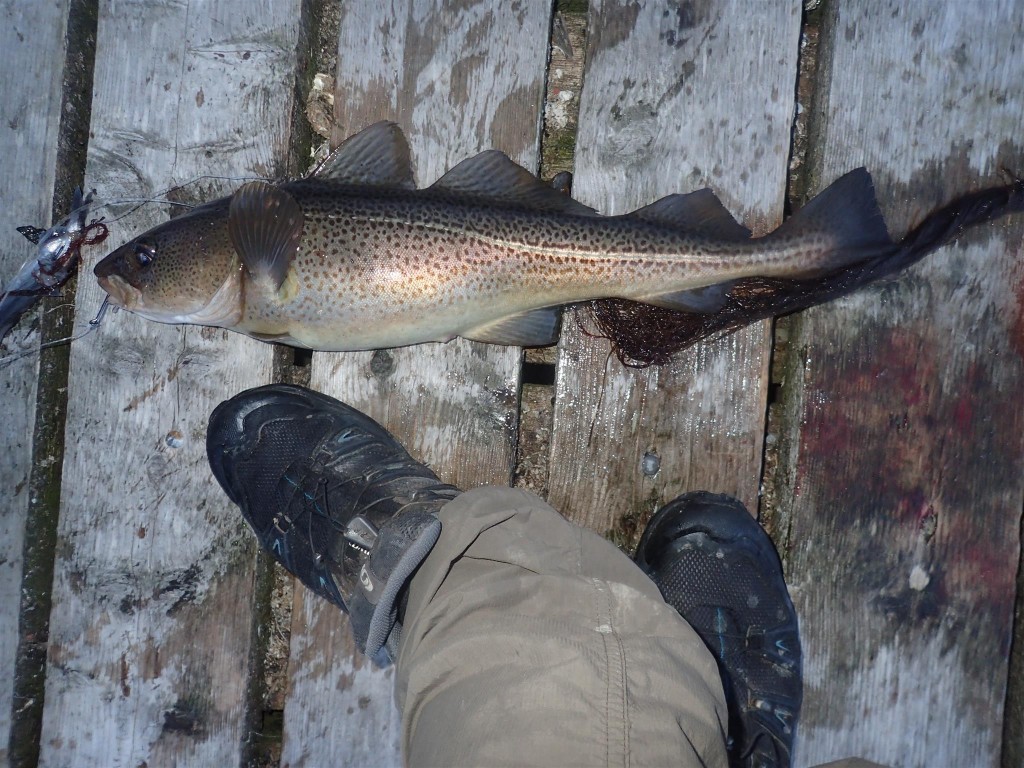 Still, no flatfish.  I noticed my smaller rod wasn’t doing very well so I decided to switch its spot with my heavier rod.  I cast it out and, as I was casting out my my heavier rod, the drag started singing!

I still had to reel up my heavier rod, so I let the fish take its time.  Eventually, I felt the weight of something completely different.  After a minute or so of pumping and reeling up, I saw a small cunner on my top hook with a large disc-like shape immediately beneath it.  It seemed to be at least two feet long.  I had a flatfish on my bottom hook!

It dove down into the wharf’s woodwork, but I was able to stop it.  I brought it up higher and noticed a conspicuously large mouth with teeth and fairly angular fins… could it be a small halibut?

My heart started racing.  There was no way I was going to lose this fish, this was the cherry on top of an already outstanding trip.  I grabbed my lip grippers out of my bag and started walking the fish to a lower section of the wharf.

The fish took another dive, but I stopped it on my 15lb line.  I had it on the surface, ready to lip, but the cunner on the top hook swung around wildly and made it immensely difficult to control the flatfish below.  It took one final dive with power I’d expect from a fish twice its size and it was gone.  It had straightened my number 8 hook.

I fished long and hard into the morning, but only had a larger Greenland cod to show for it.  I was also having a hard time keeping bait on the hooks, as the bait thieves seemed to have woken up.  I had sized my smaller hooks up to slightly larger Owner hooks, but no more flatfish came to play. 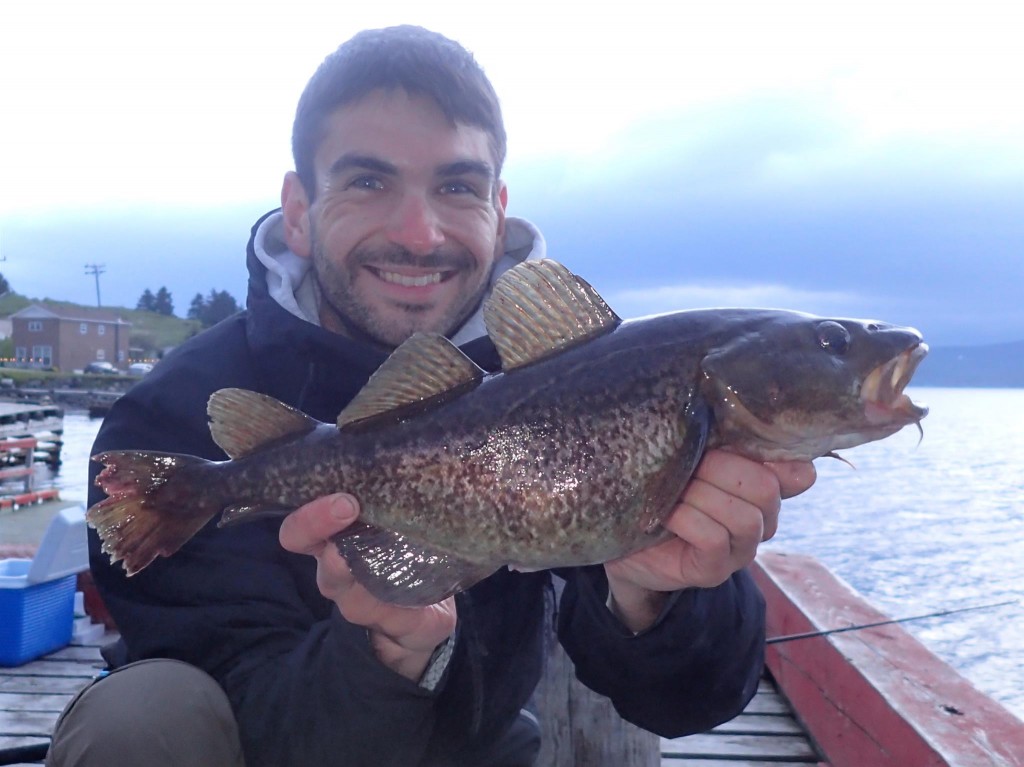 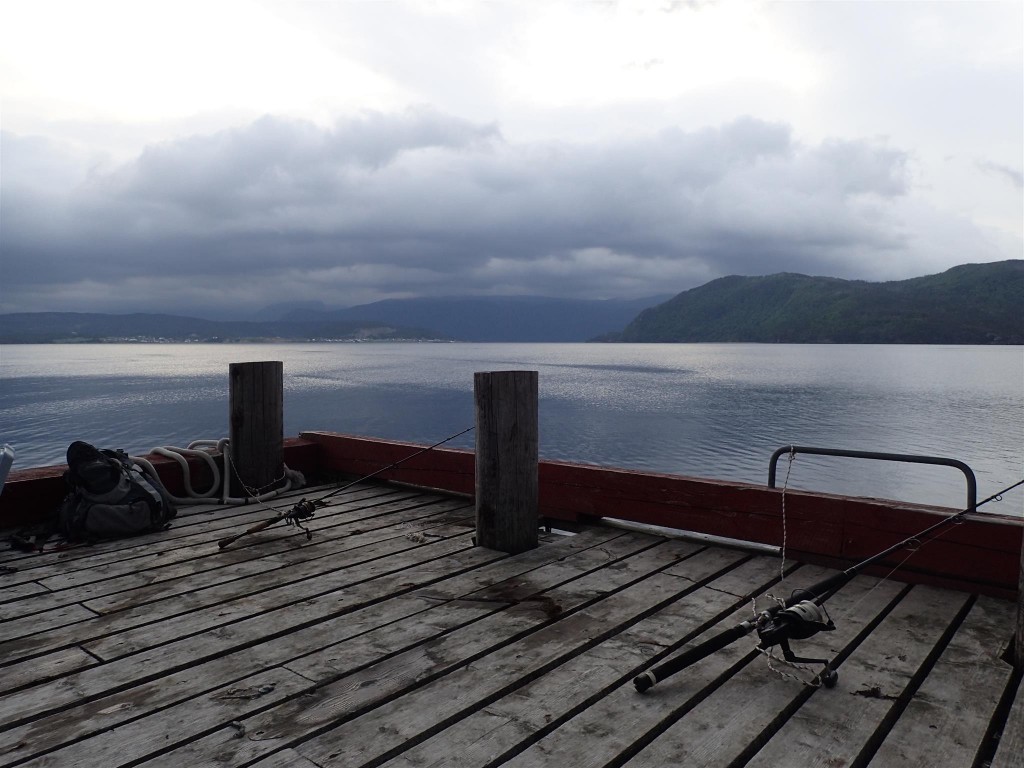 It was finally time to head back to the airport.  As I cleaned up my gear, I spotted my straightened hook on the ground.  There it lay, bent and twisted just like this trip had taken its own twists and turns.  The fish of the trip got away, but I can hardly complain. 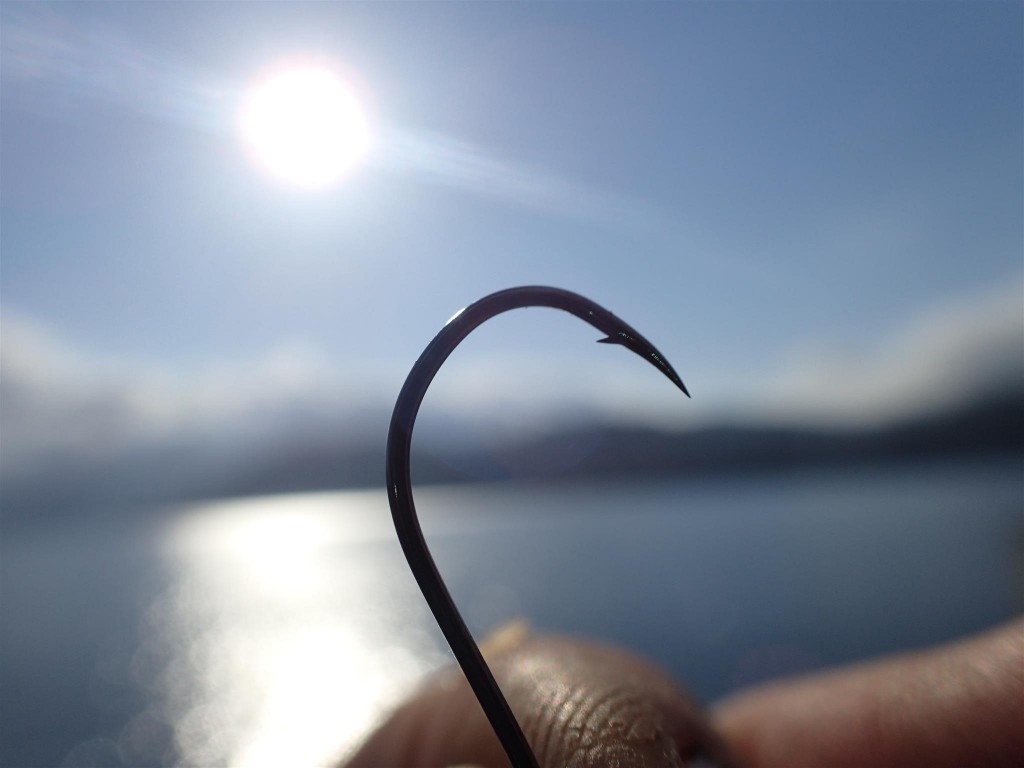