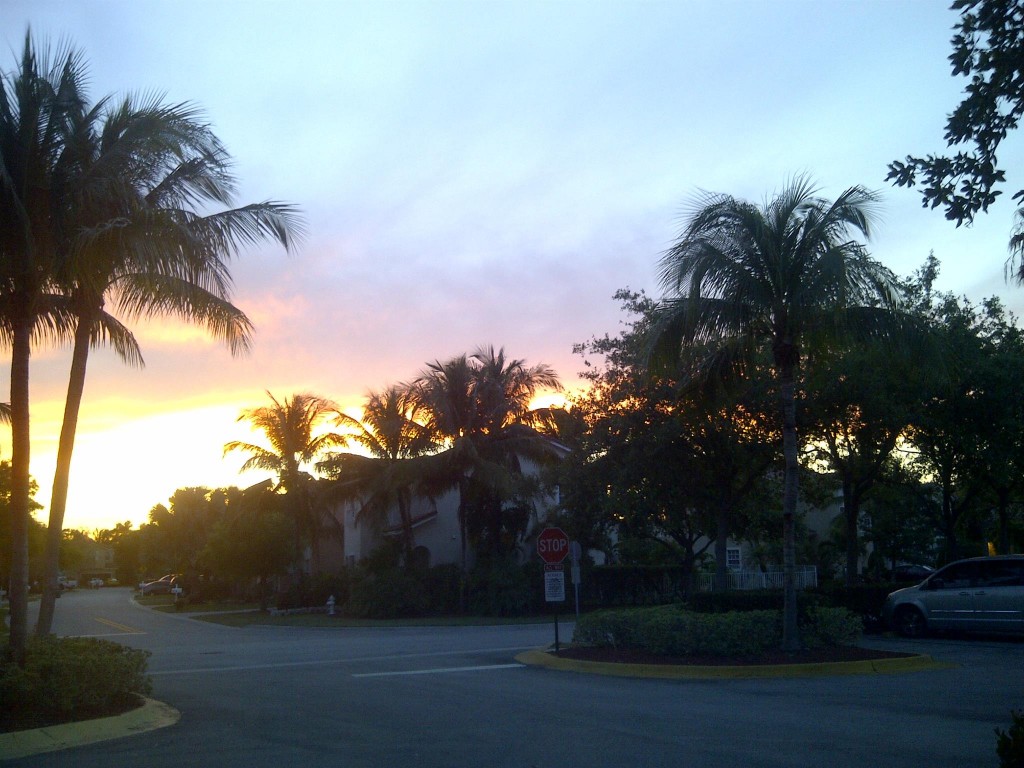 For some reason or other our annual winter Florida excursion did not happen this past holiday season, so we had to make up for it this spring.  This time, Ken and I traveled in style via airplane rather than the usual Toyota Corolla.

When we arrived, we discovered our rental car was comically tiny.  We could barely fit our luggage into it!  Thank-goodness we were meeting Mark, a friend of Anthony, for the trip as he had an appropriately sized vehicle.  Thanks for the save Mark!

Mark had also done me a huge favour by finding us a great deal on a hotel room.  Turns out he shared my love for the show Trailer Park Boys.  BAAAAM!  The trip was made.  (warning… links in this post may not be PG)

The next morning we all woke up at an ungodly hour to fish Anglin’s Pier, which would be our second home for the next few days.  There were some incredibly cool fish swimming around a lighted area and we tried for them, but they were extremely weary.  In the coming days, we’d learn the secret to catching them was light line and a natural drift.

As the sun rose, one thing was immediately apparent to me.  I was surrounded by some big houndfish, big barracudas, and big parrotfish!  I tried fruitlessly to catch the big houndfish and barracudas, they weren’t interested in anything I had to offer.  I’d return in the coming days with a better arsenal.

Ken had family plans so Mark and I checked out a nearby park on the inter-coastal canal system.  There were some new species to be had! 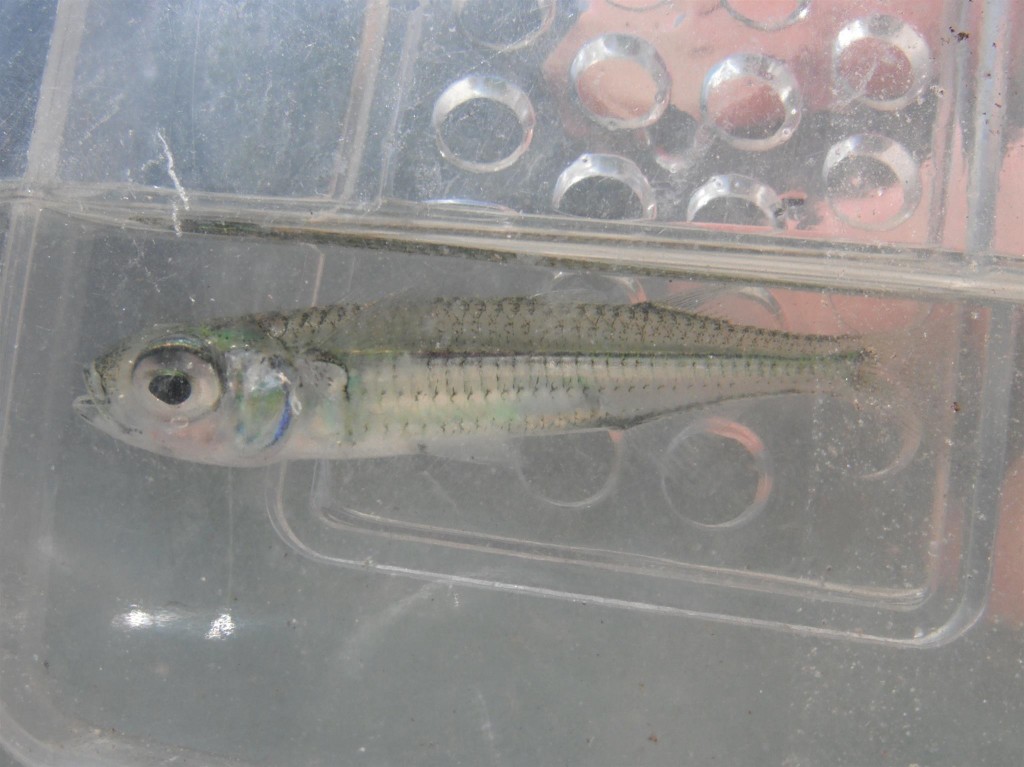 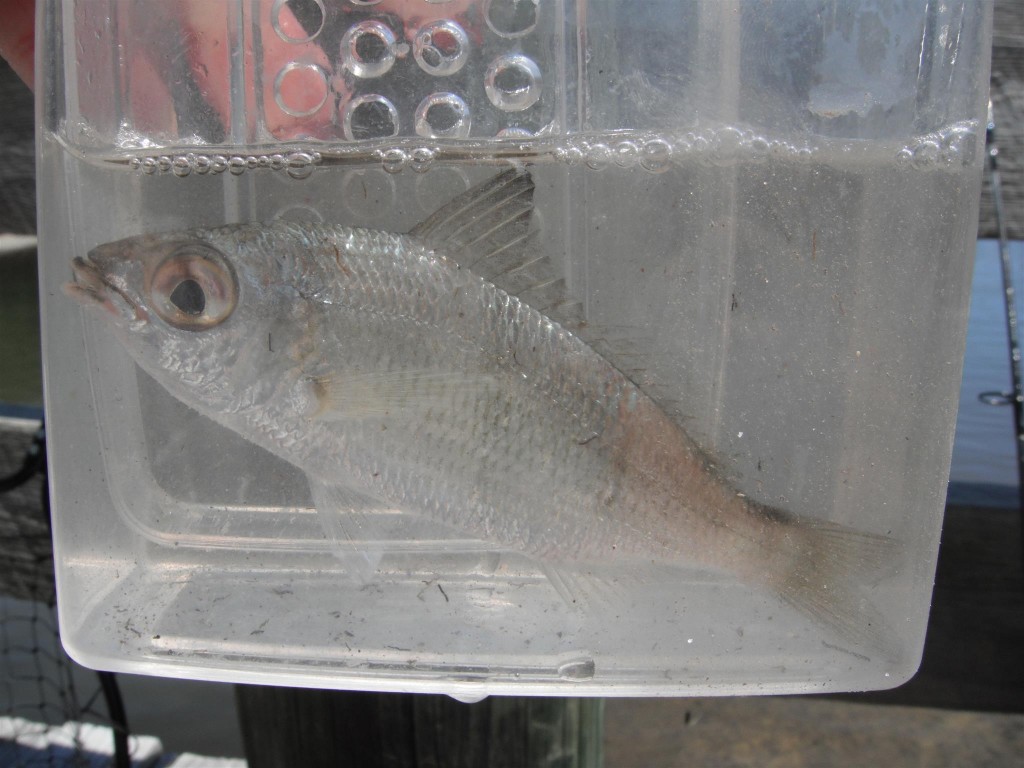 As well as some old faithfuls…

Checkered puffer… again!  I was glad to find that they hadn’t gone away. 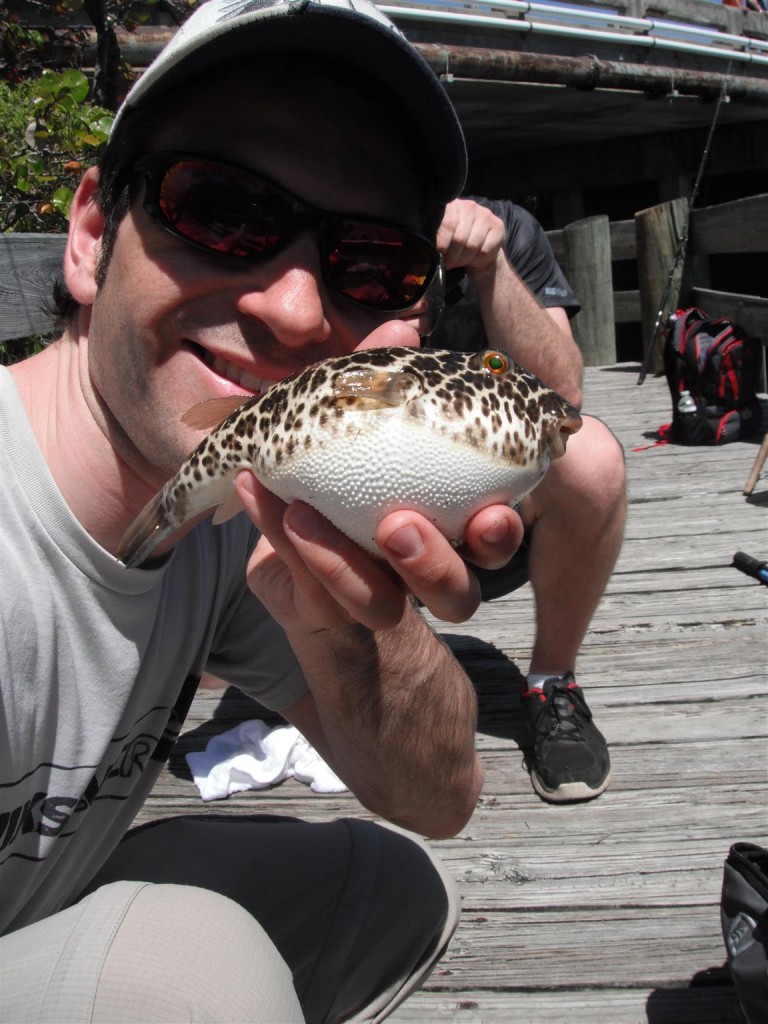 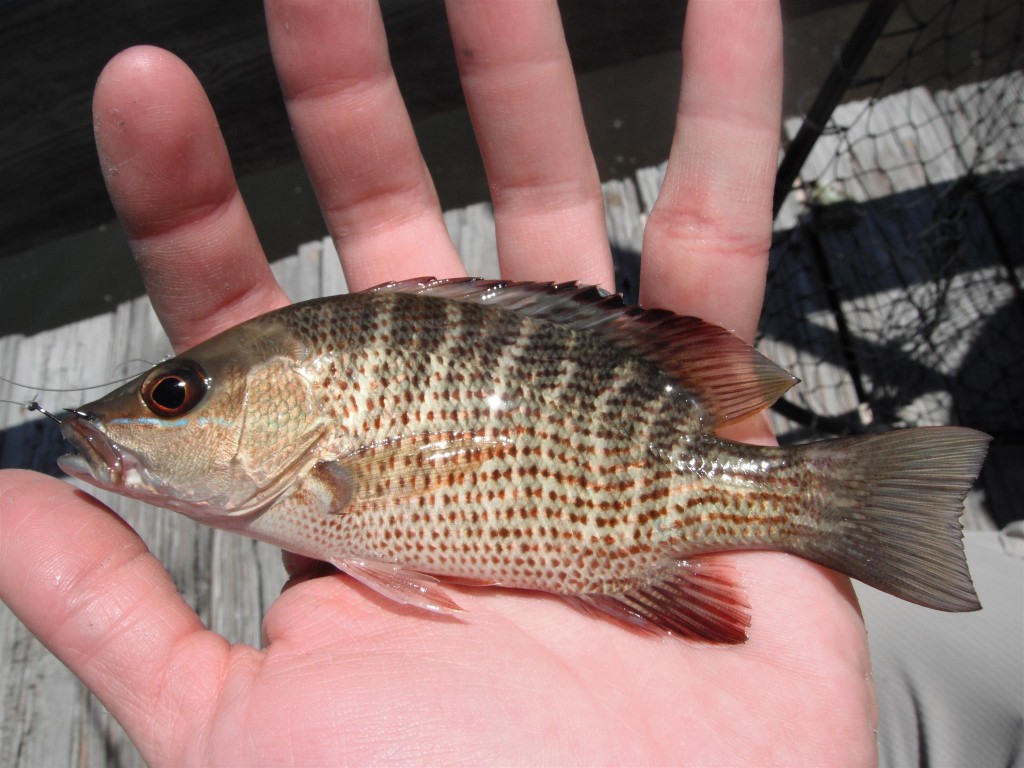 A mystery grunt I’ll probably never be able to ID… 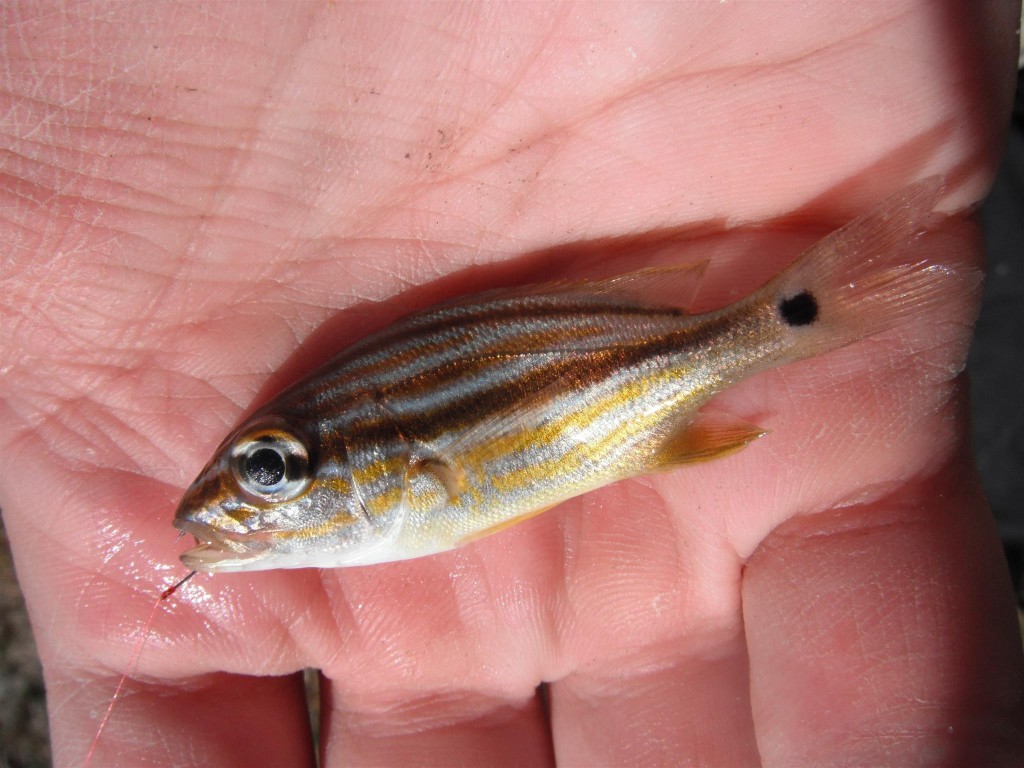 I spotted some needlefish and remembered I was missing Atlantic needlefish on my life list, so I caught one.  Unfortunately it was another darn redfin… 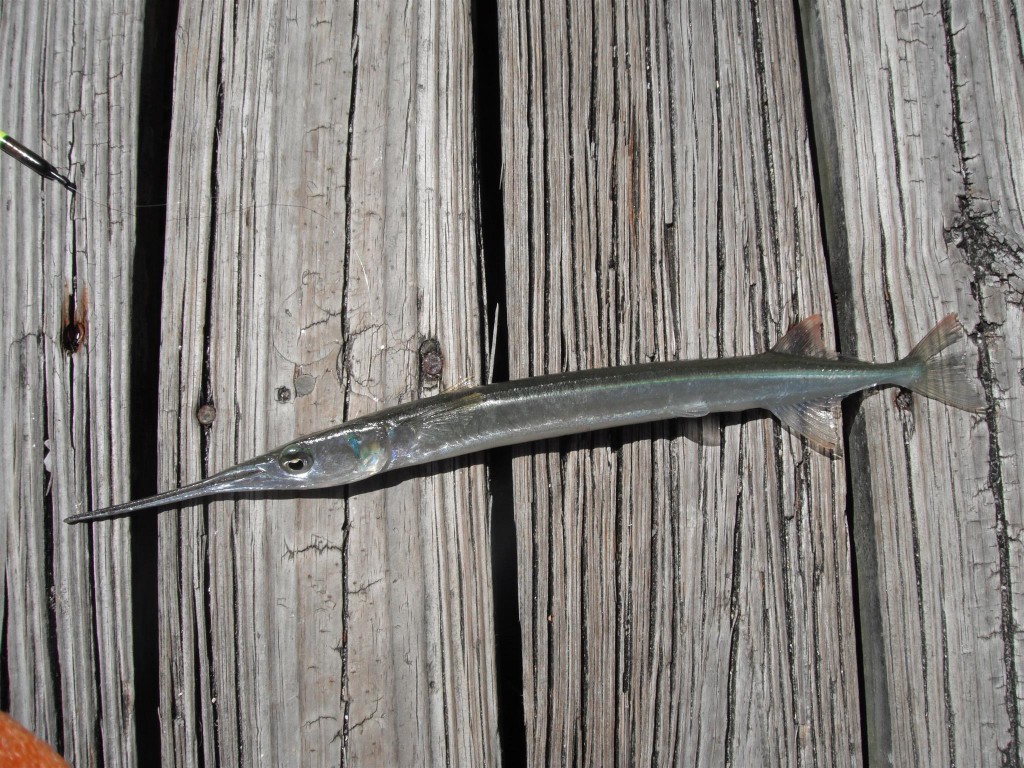 That afternoon we rejoined Ken at a freshwater canal to try and find cobra snakehead.  Something was smelly about the water and both Ken and Mark commented seeing snakehead that wouldn’t strike.  We fished into the evening and I didn’t see one.  I didn’t even find Randy’s BBQ!

On the way back to the car I did spot a pair of large butterfly peacock bass in the shallows.  It was spring spawning time for many of the Floridian cichlids and these were no exception.  I threw a few different lures at them and they would follow the lures trying to chase them away, but they weren’t biting. Every once and while they would nip at the end of the lures, but nothing was sticking.  They didn’t respond to their mating name either.

I finally tried a large spoon and one nipped the treble hook at the end just enough for the hook to stick!  A short and miraculous fight later, I almost had it to shore.  Unfortunately, the hook was set in the lip and a quick jump later the big peacock bass was gone. That’s fishing!  It was still a great experience stalking these guys and watching them react and toy with the different lures I threw.

The next morning we awoke at an even more ungodly hour and hit the pier.  I really wanted to get some of those cool fish in the lights!  Before heading to the light like moths to flame, Ken suggested we fish the surf a bit, and this worked to get me another new mojarra species. 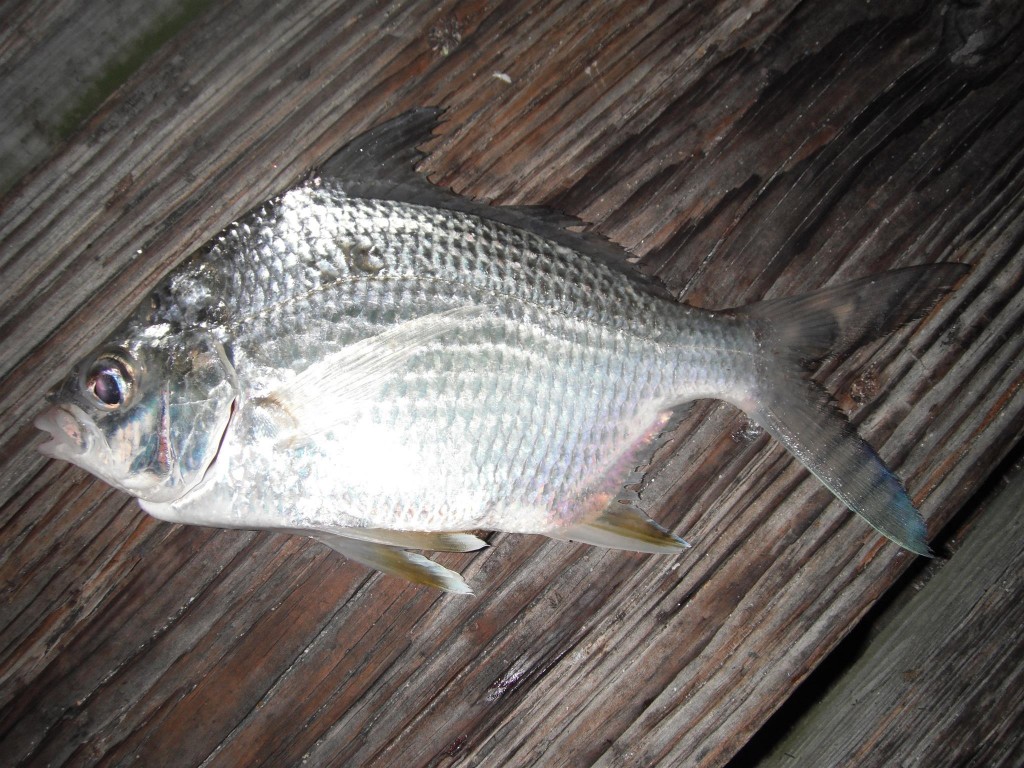 We then moved on to the lights and I dazzled with this mysterious fish.  Ken later did the ID work and found it to be a… 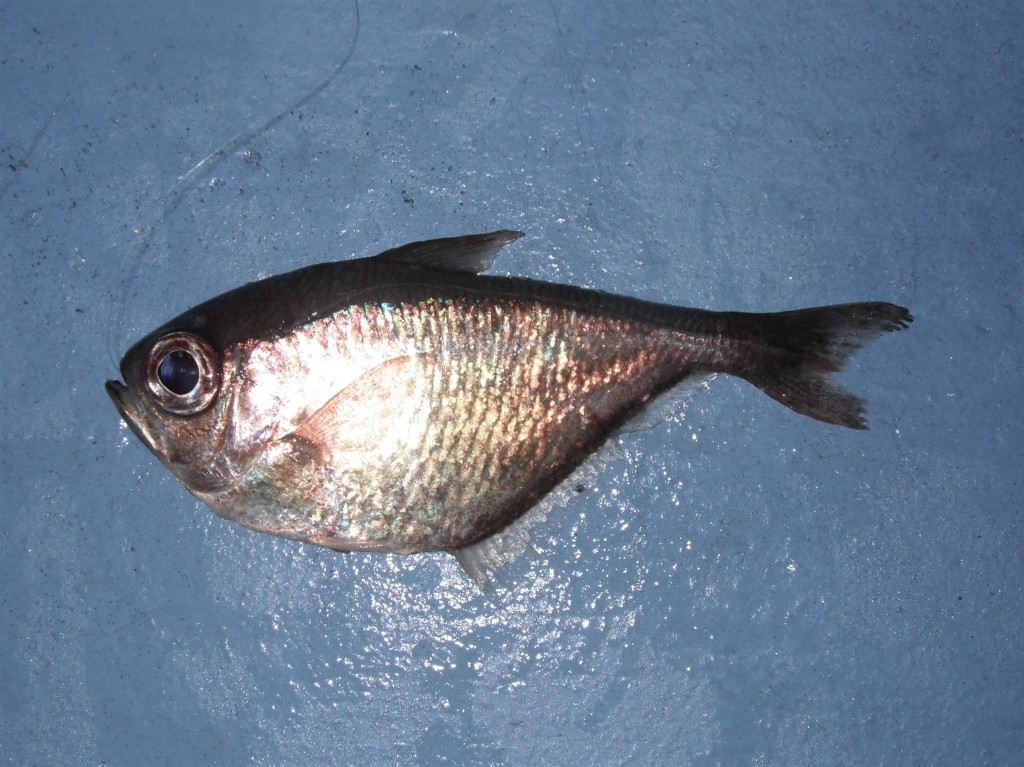 Turned out the key to catching these fish in the lights was to use 3lb or 4lb line.  One of the mornings Mark had this work against him, losing a hard running fish to the pilings and light line.

We quickly found ourselves in a mess of Atlantic bumper!  These fish not only look ridiculous, but they sound ridiculous.  BAAAM!! 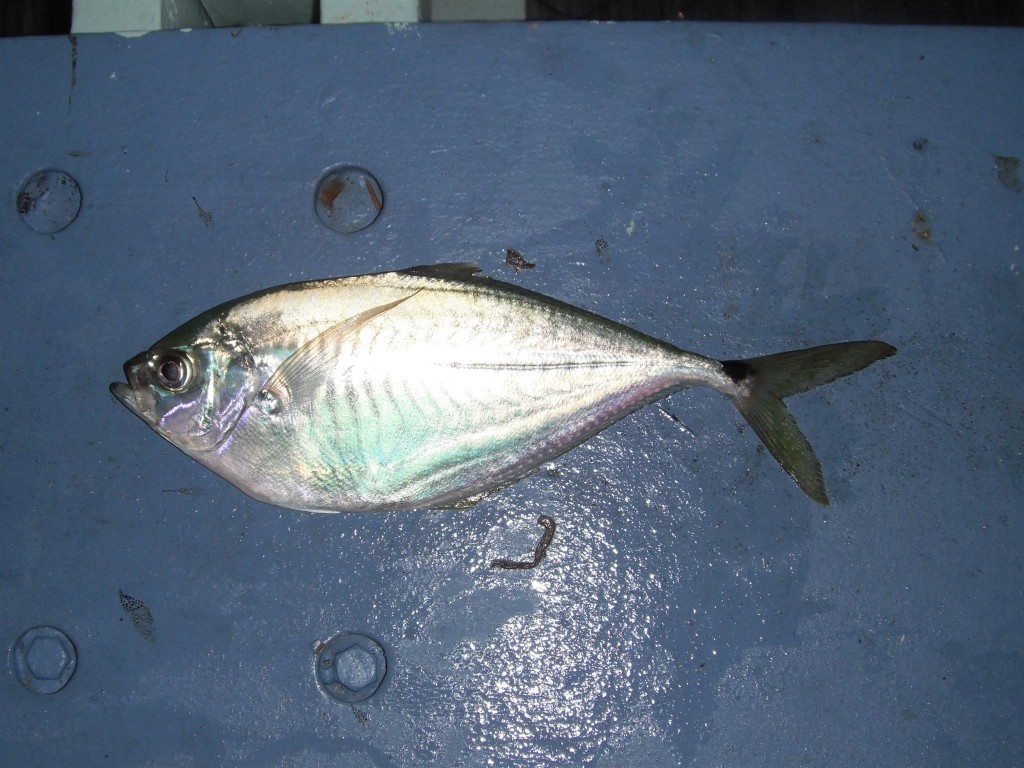 As the sun rose and reef fish awoke, I caught a new species of damselfish. 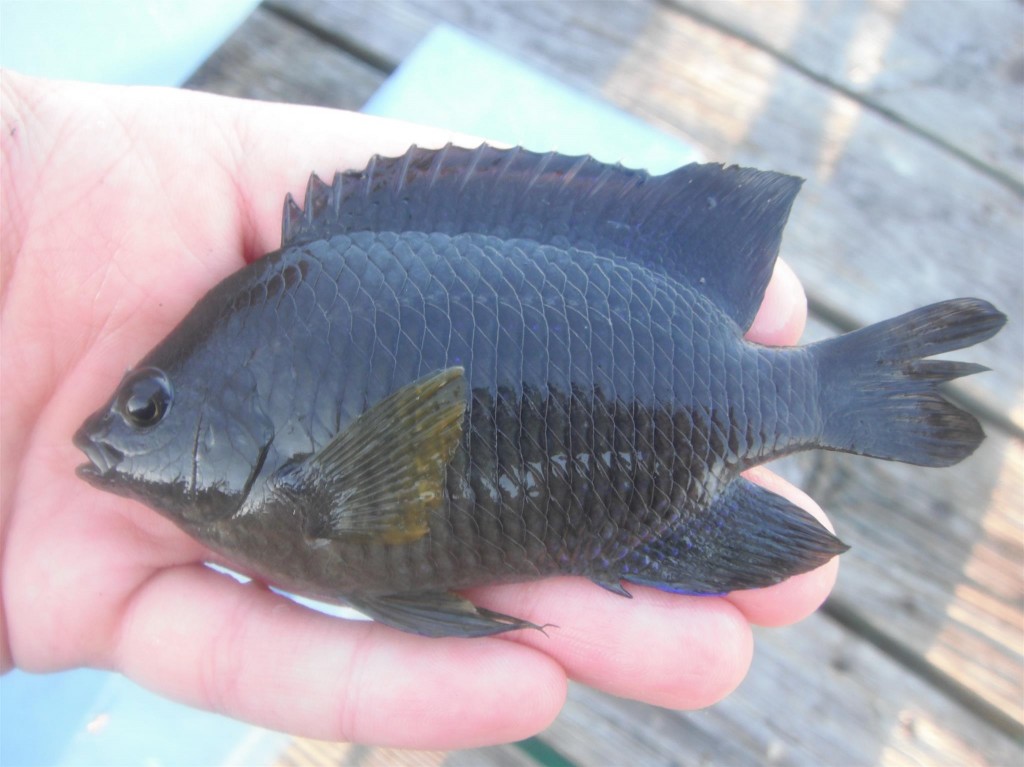 And some old players made an appearance… 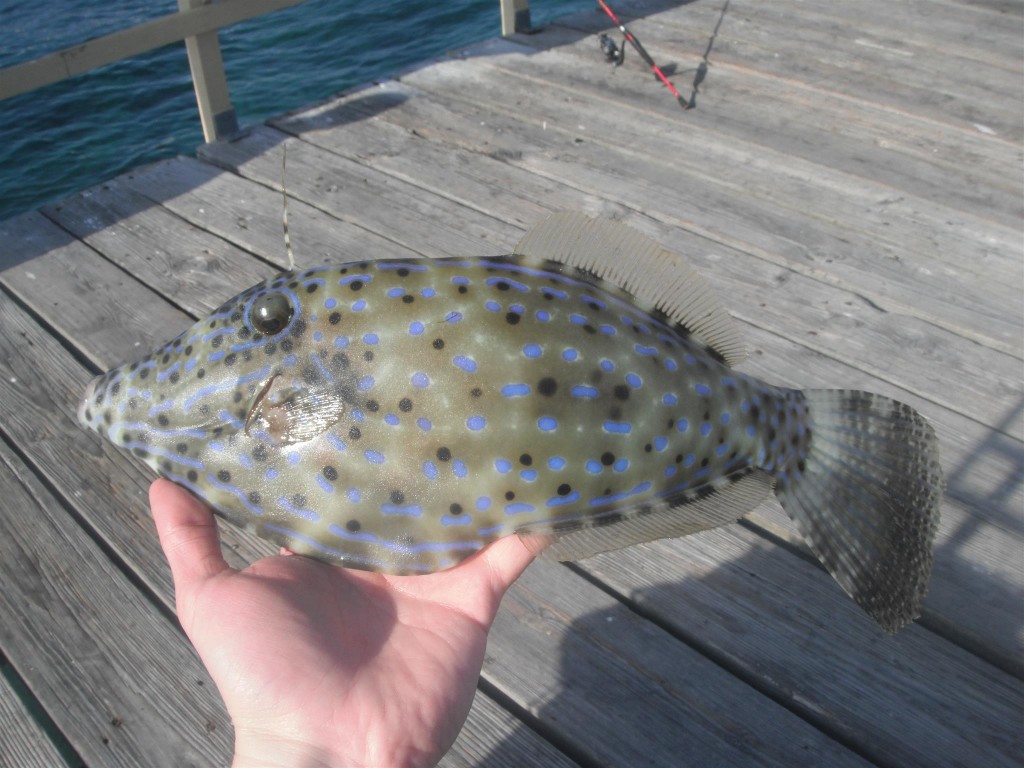 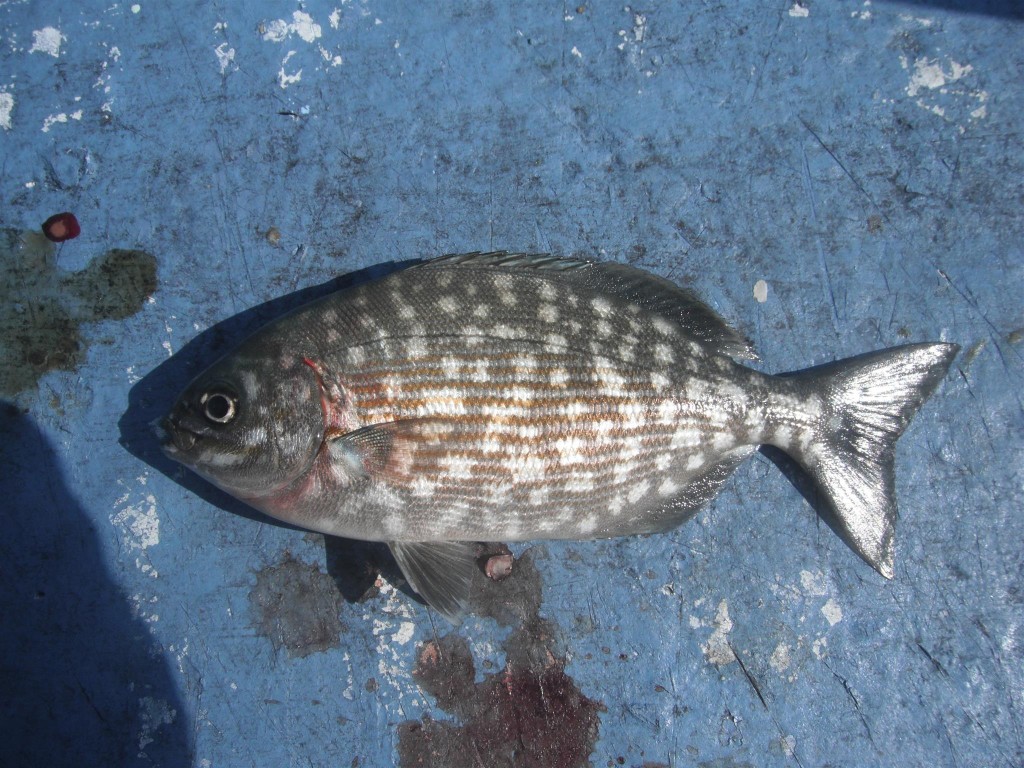 I continued to be dazzled by the large barracuda and houndfish in the area, but they wouldn’t eat anything I threw at them.  Lures, dead shrimp, and squid were all rejected.  I eventually witnessed a local catch a small barracuda and asked what he was using.  Live shrimp.  I would need to return with some prime bait!  I couldn’t believe how picky those fish were.

Meanwhile, Ken was putting on a clinic with the parrotfish and was on to something.  In the coming days he’d set a new precedent.

While Ken had lunch with his family, Mark and I visited a spot where I had caught golden topminnow in the past.  It took me a while to find my bearings, but we got to where we needed to be.

We found the topminnows, but there was a family having a cheeseburger picnic across the pond and they were blasting some intense latin techno beats.  It was hilarious trying to focus on catching 2″ fish with techno music blaring in the background.  Somehow we scraped by… 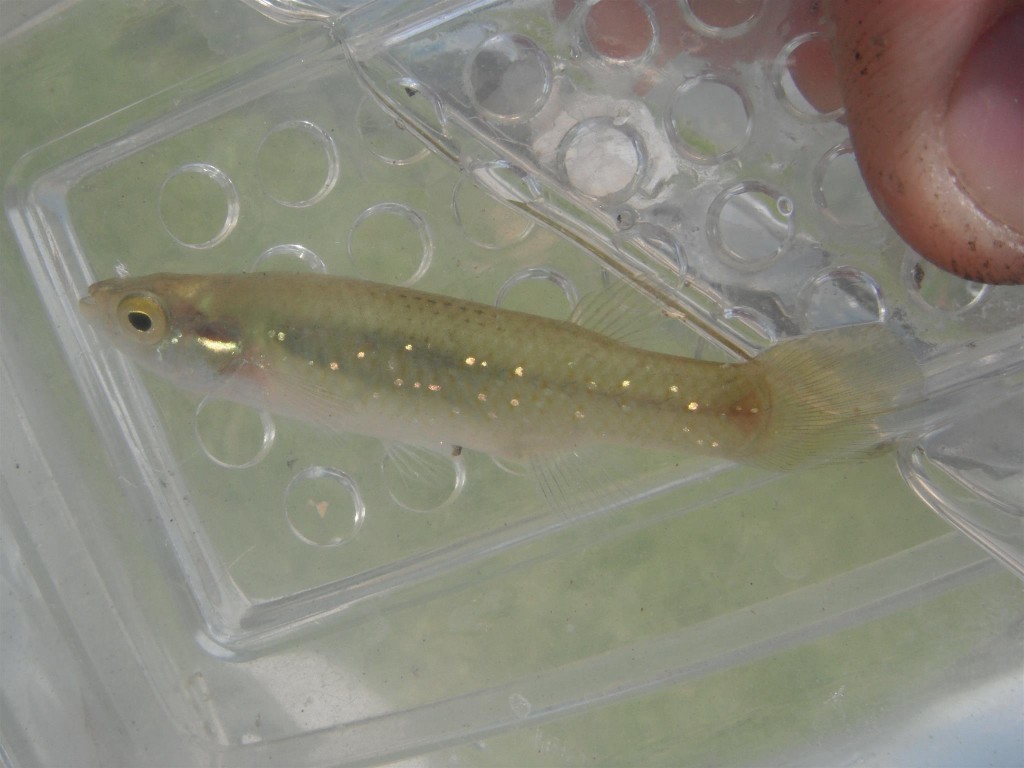 We arrived at a spot where Ken hoped to catch a zebra tilapia, and he did!  Meanwhile, I had a blast with some cichlids on my new ultralight rod (replacing the one I had left on the ground on my last trip). 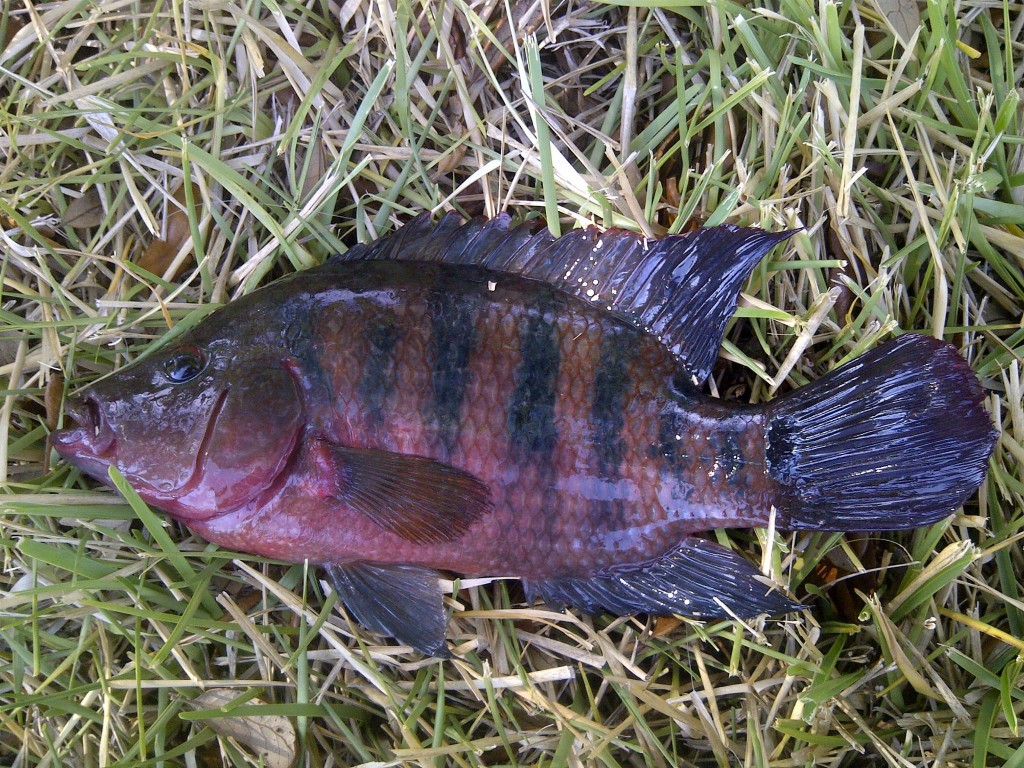 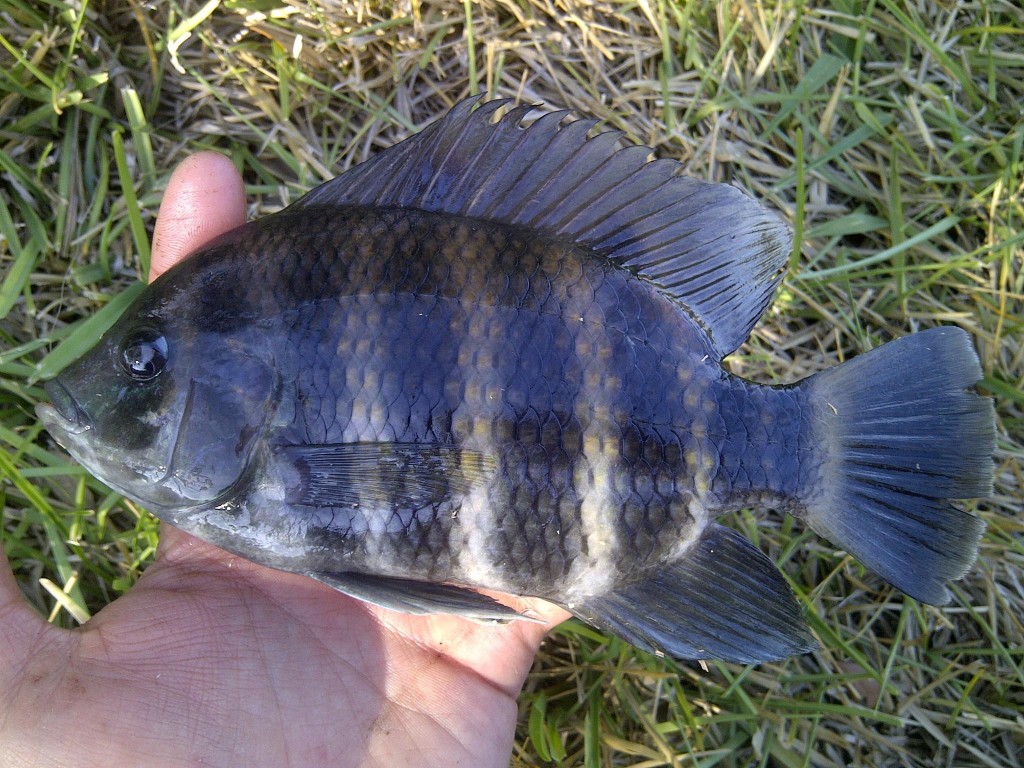 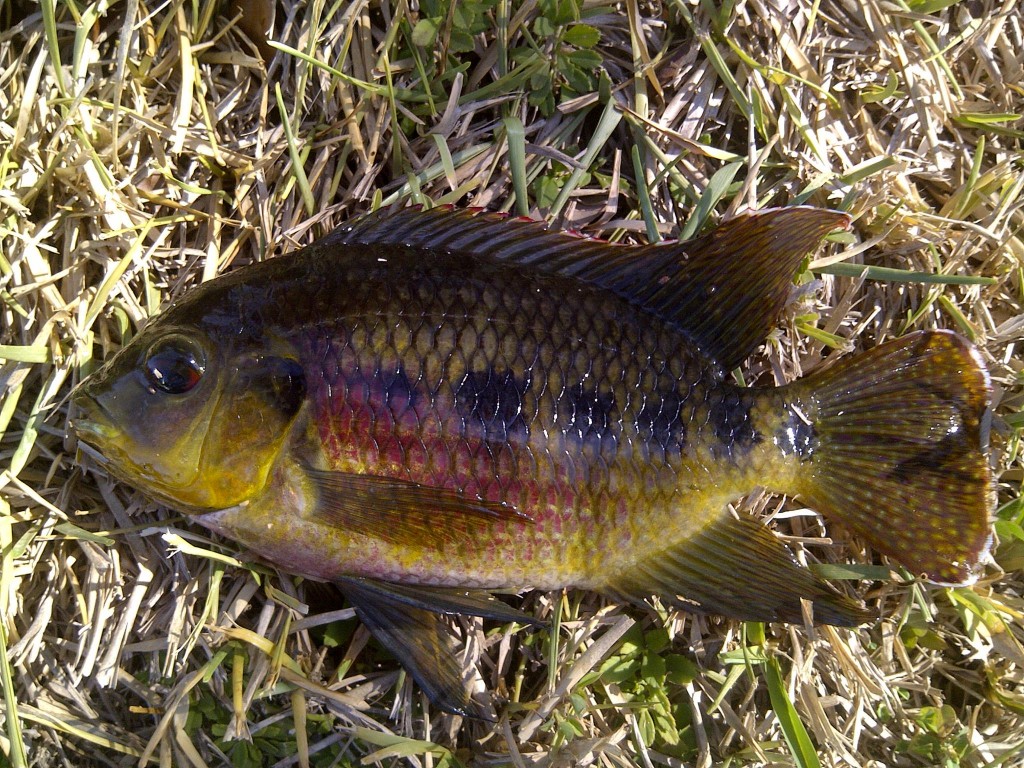 Next on the list of spots was a small ditch nearby a bunch  of palm tree farms that Martini had suggested for two new species.  I never knew such things as palm tree farms existed, but they were sure cool to drive past!

As I was admiring the little sprouting palm trees, my eye caught some fish shapes inhabiting a ditch.  We decided to see what they were, you never know what you’re going to find in a ditch in Florida… that’s the beauty and horror of it all.

In this ditch were a few blue tilapia, a species we had all tried to catch before but couldn’t get to bite.  But that’s water under the fridge now.  As luck would have it, the blue tilapia in this little ditch were hungry for worms!

Blue tilapia … this one’s an extra hard BAAAM!! (I bet they’d have gone for cheeseburgers too) 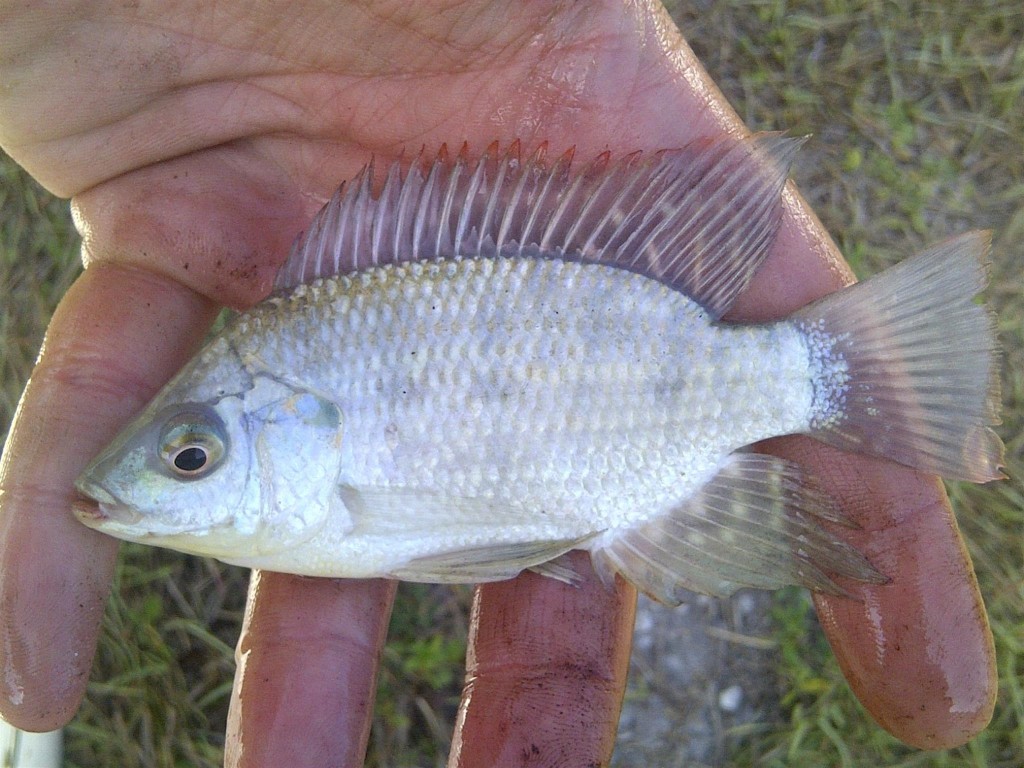 At our target spot Ken and I were quick to catch our lifer pike killifsh.  These little guys were so cool!  They were so tiny, but so quick and angry to demolish our baits… they acted like mini northern pike! 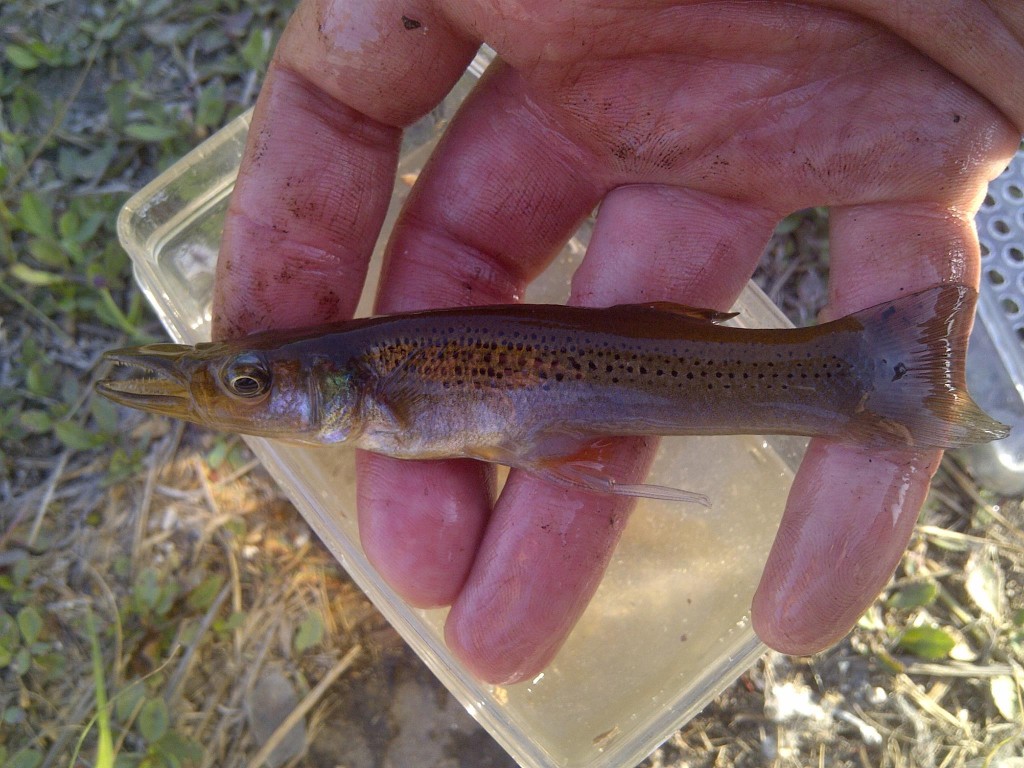 After this I found my lifer black acara, a fish that had eluded me in a different ditch on our last trip. 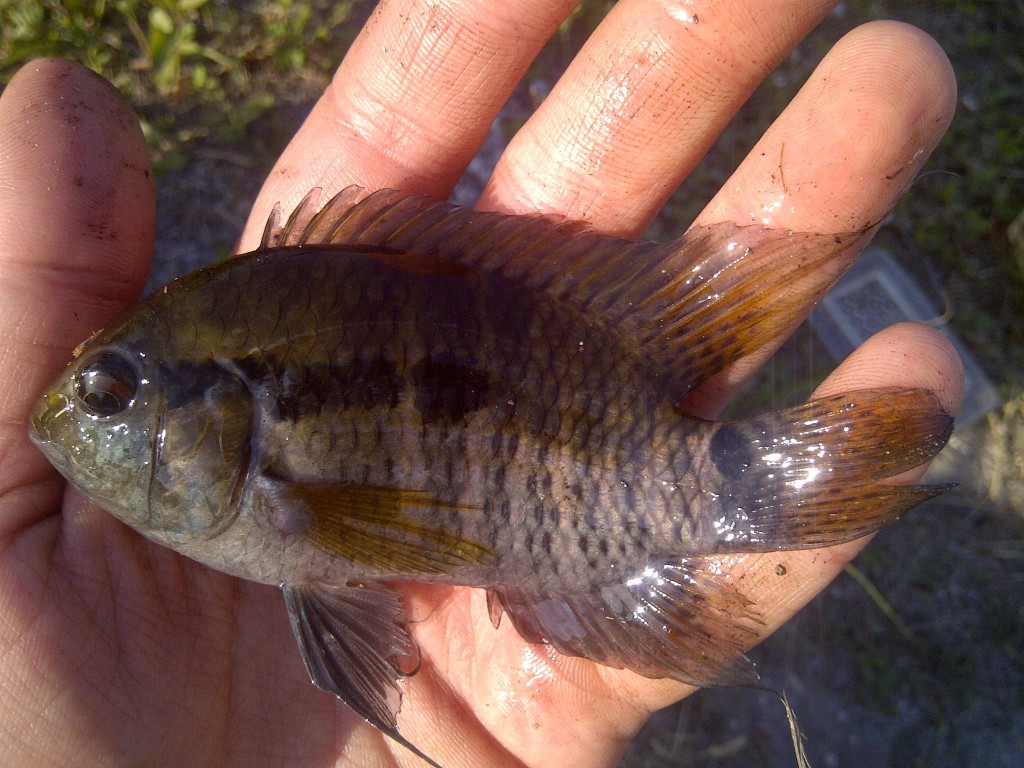 The light was fading, but I also managed to snap my new life list picture for African jewelfish. 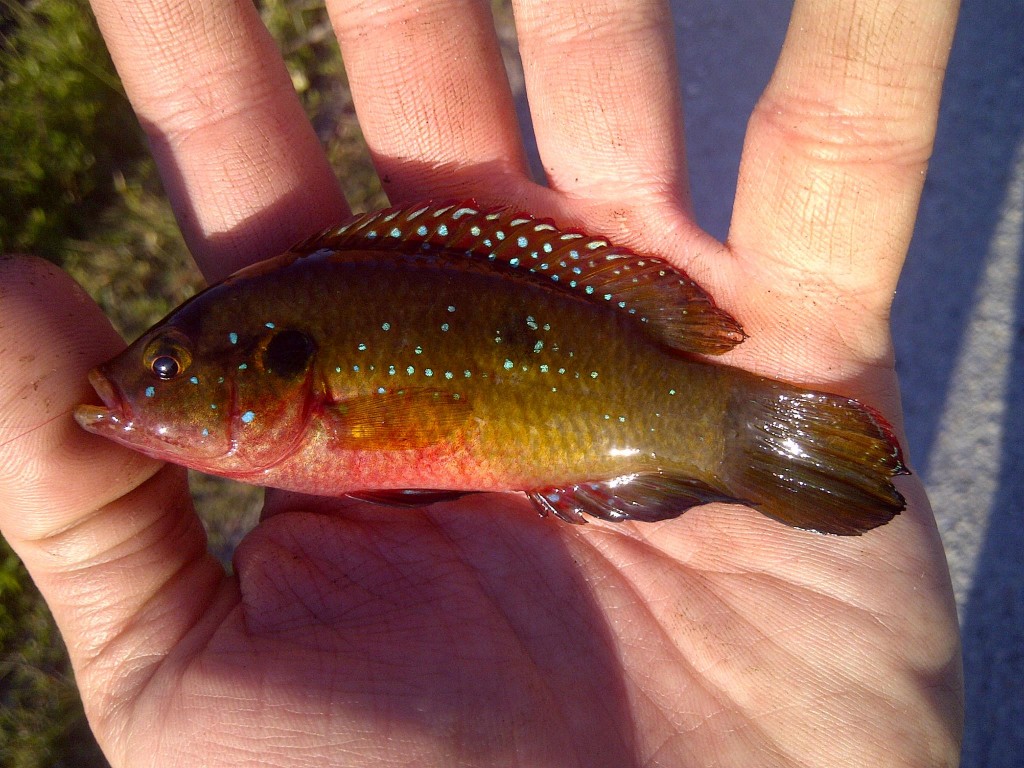 Everyone had a pretty awesome day of life listing and our spirits were high.  We drove off into the sunset… 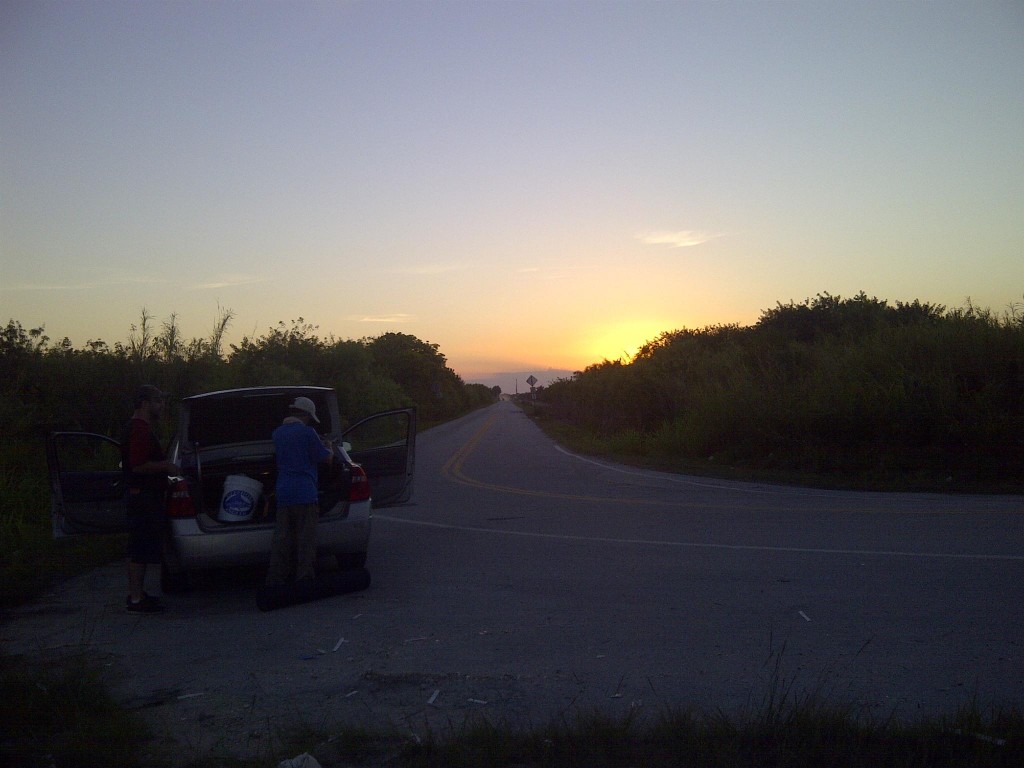