There was a great deal of diversity planned into this road trip.  From obscure sunfish, to voracious catfish this would be one to keep us on our toes.

After an endeavoring drive south, Ken and I found ourselves poking around a salty, sandy area of Sandy Hook, NJ, for some tiny new life list entries. 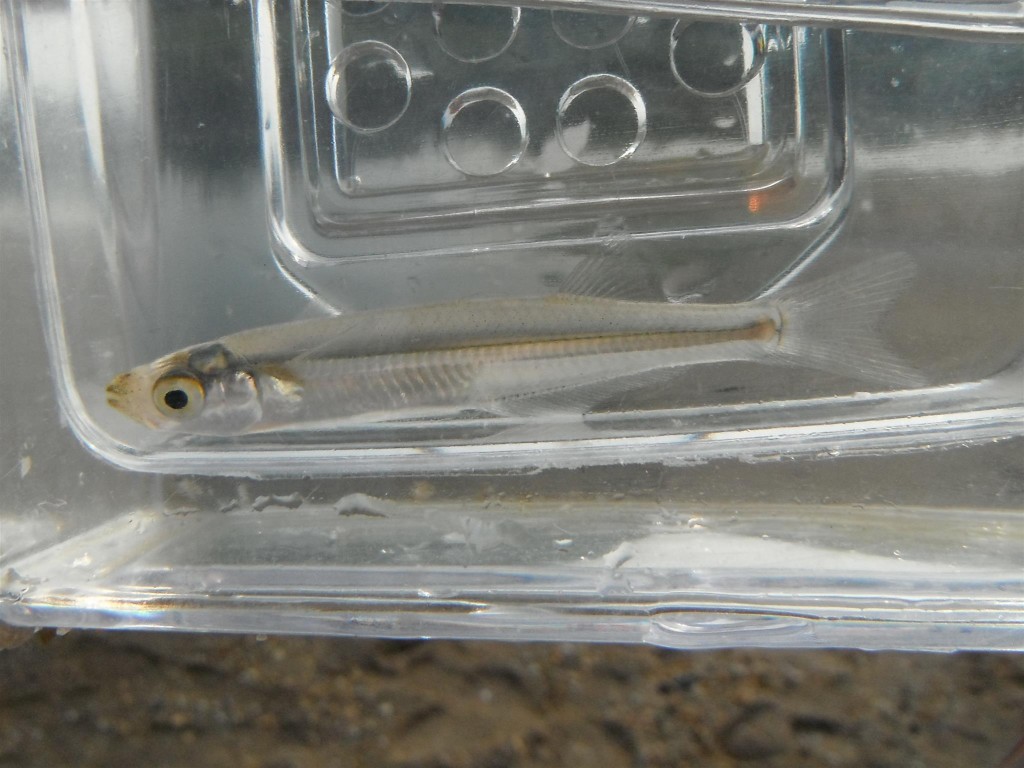 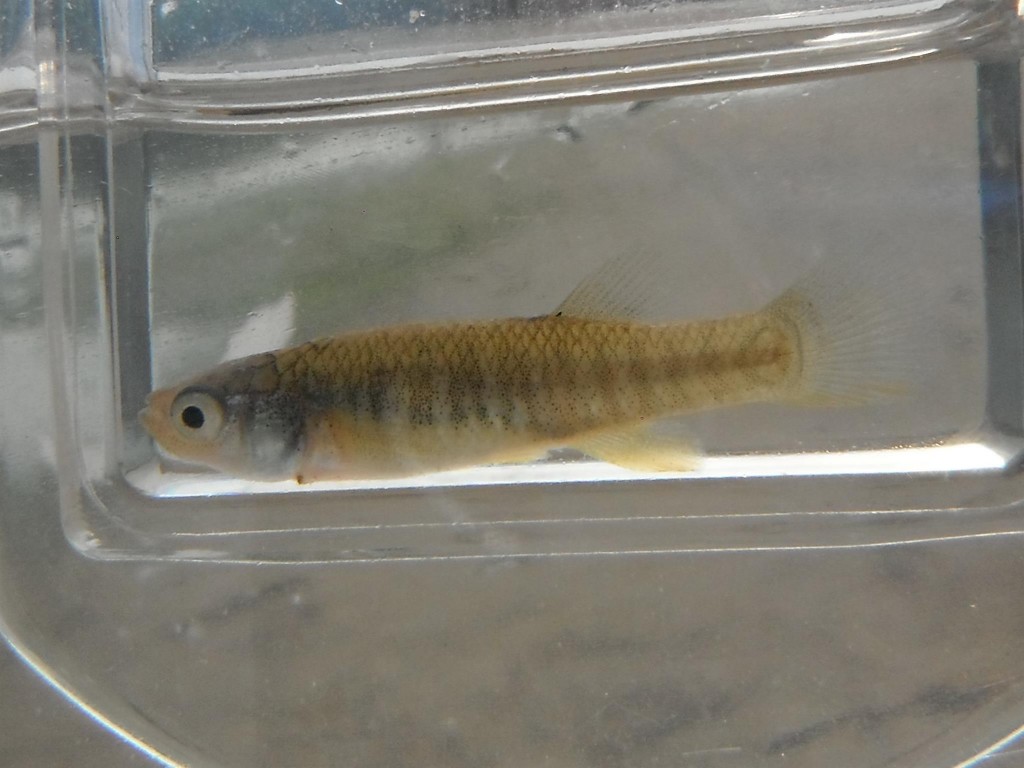 We then dragged our hefty gear through the sand and out to the beach to try for some sea robbins.  Anthony had given us some great intel that these unique-looking fish could be found here. 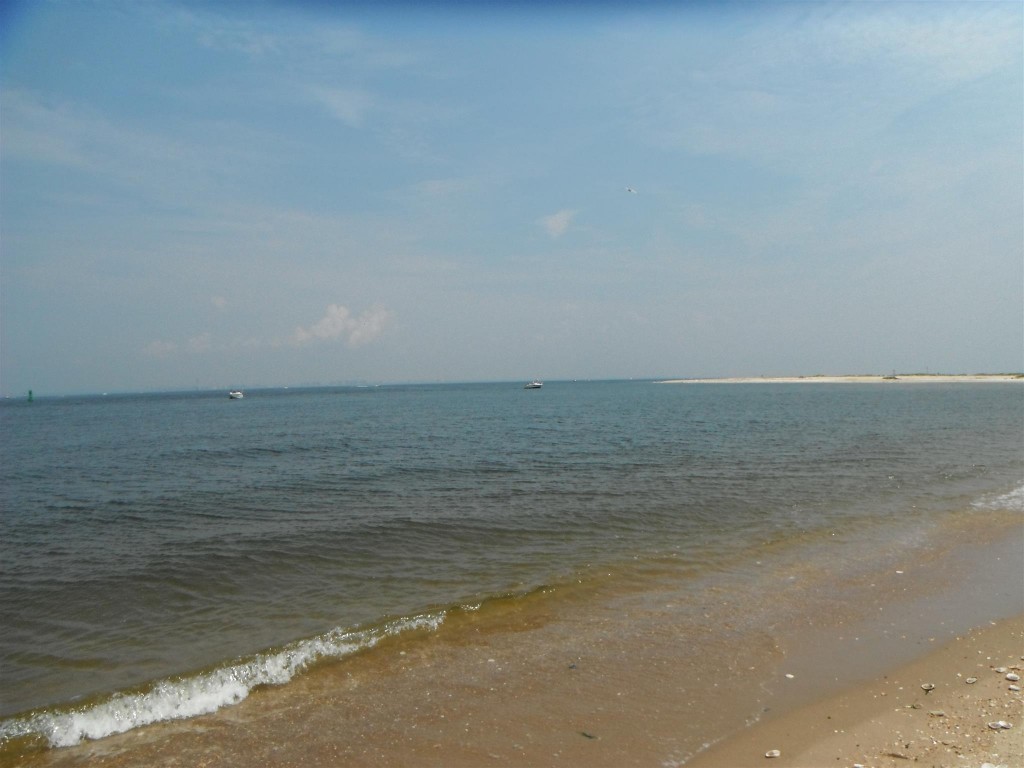 His intel was spot-on, except it wasn’t us who was catching them!  Just down the beach was an absolute ninja of a kid who was robbin’ all of our sea robbins!

While the robber of robbins had all the fun, I stumbled into two new lifers. 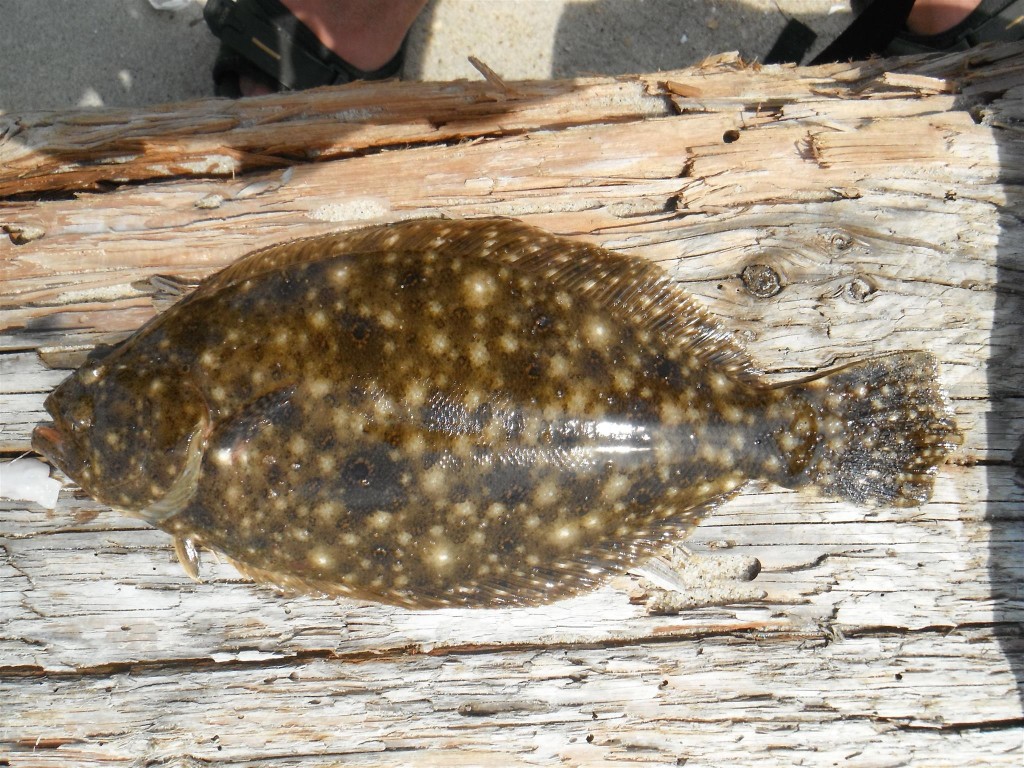 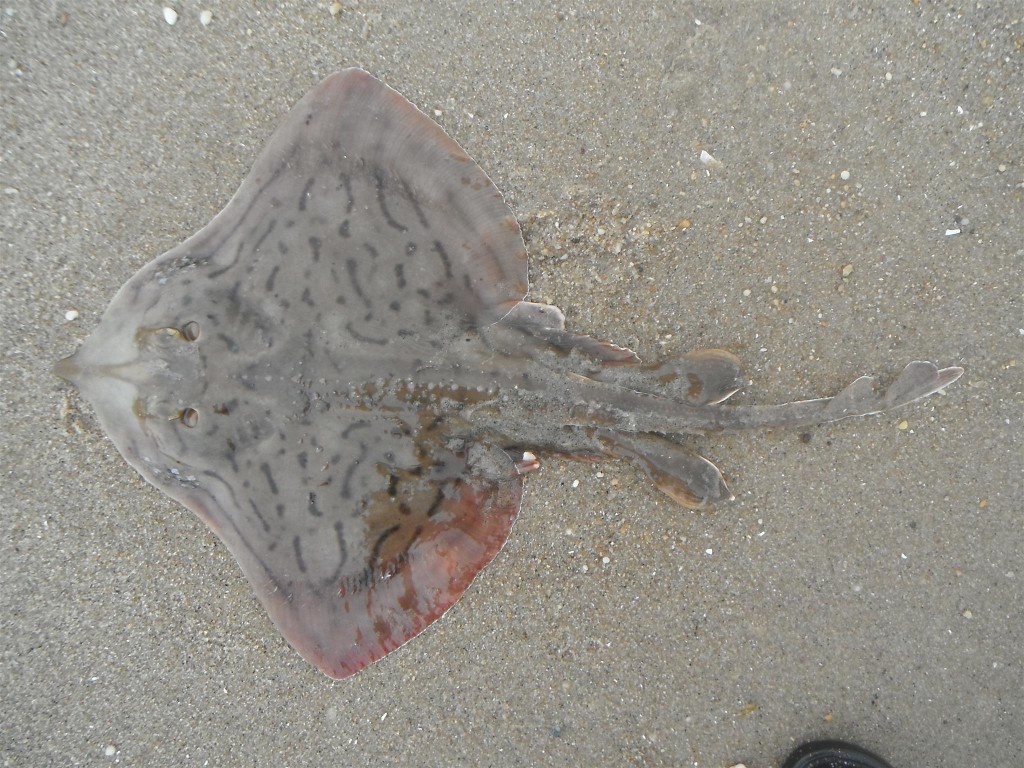 Eventually, I bested a sea robbin by slowly dragging a piece of squid along the bottom. 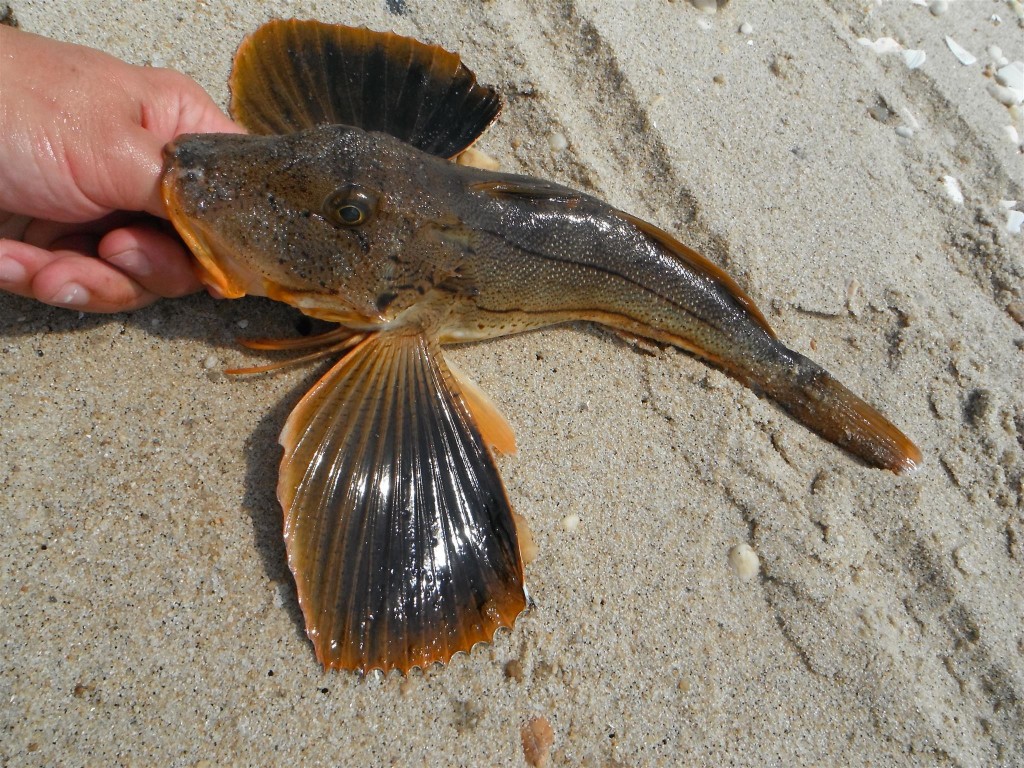 The return of the PVC rod holders… 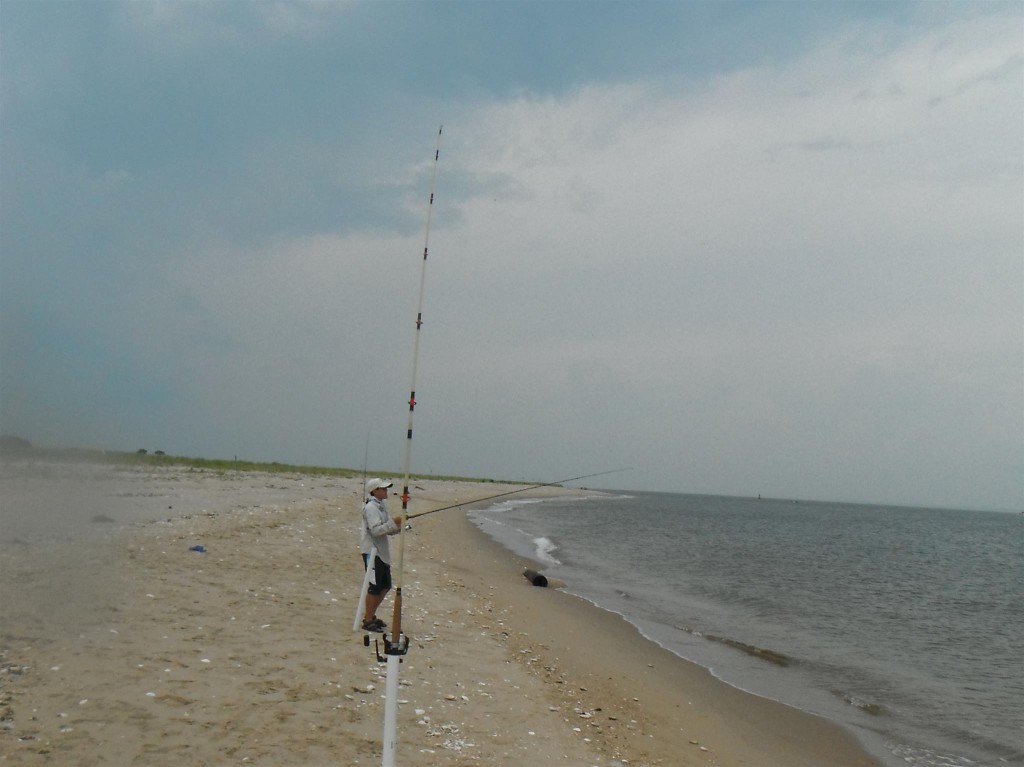 At our next stop, I had some fun with a new species of wrasse that were feeding along the rocks. 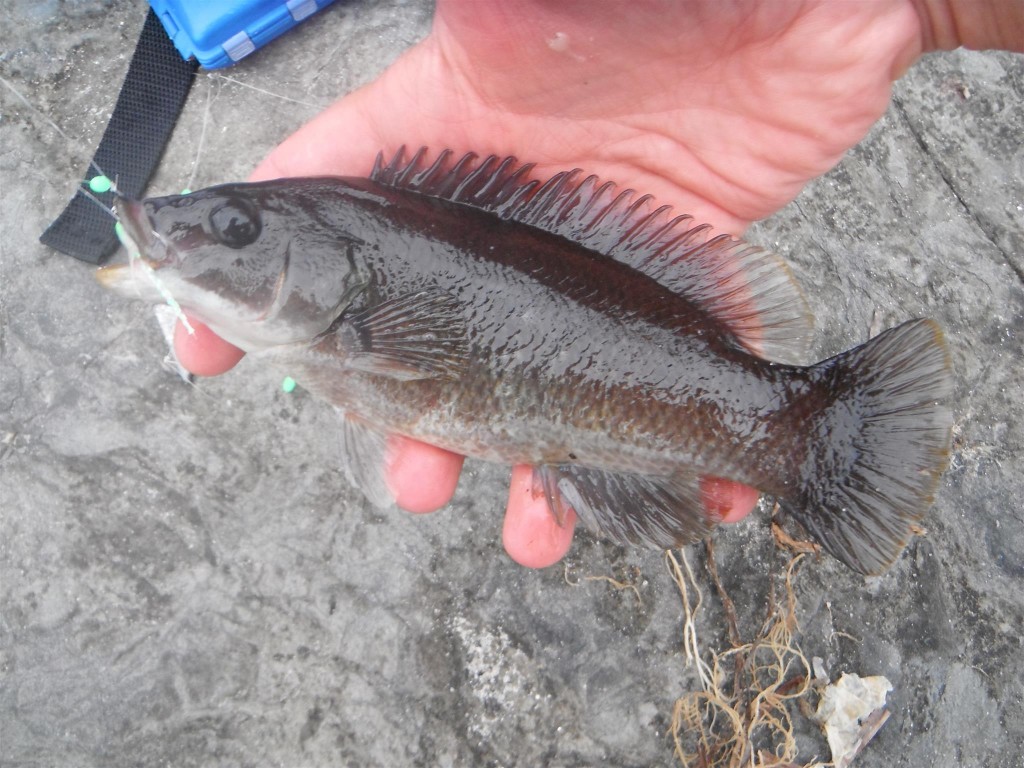 I saw some pretty decently-sized bluefish being caught so I tied on a spoon and started working away.  Ken eventually joined me and hooked an impressive striper that unfortunately shook the hook at the surface.

Our last spot for the day was a channel near a marina that was supposed to be an easy location for dogfish.  Out came the shark gear! 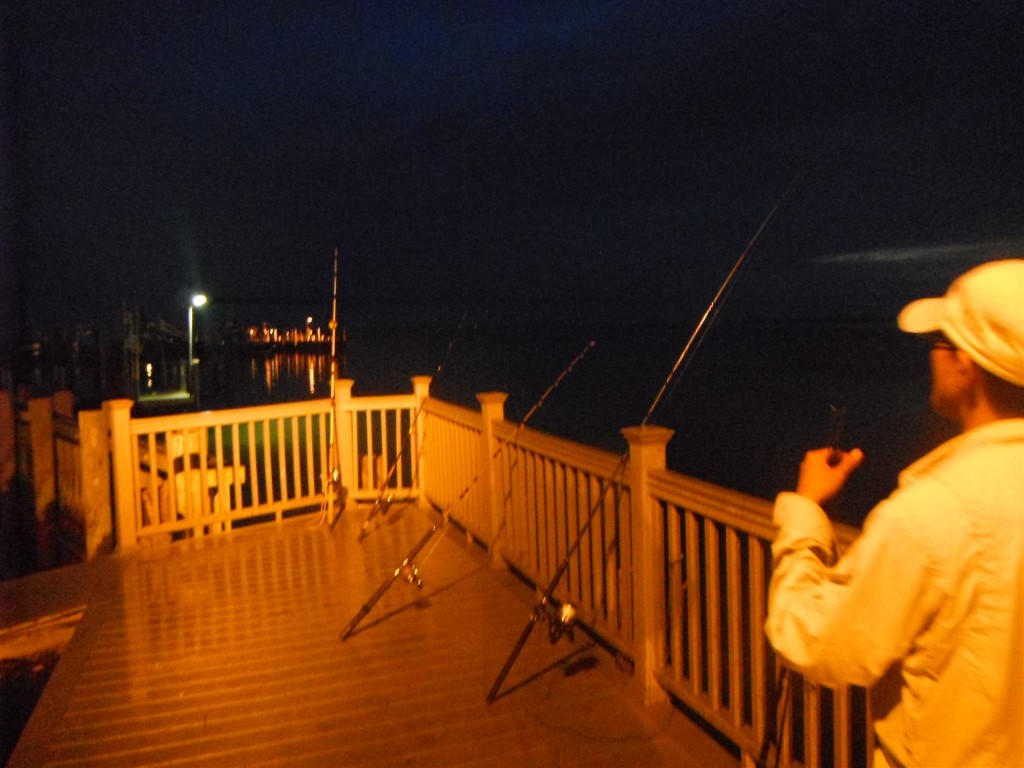 As Ken and I waited for the big bites that would never come, I fished a sabiki and caught plenty of these black sea bass. 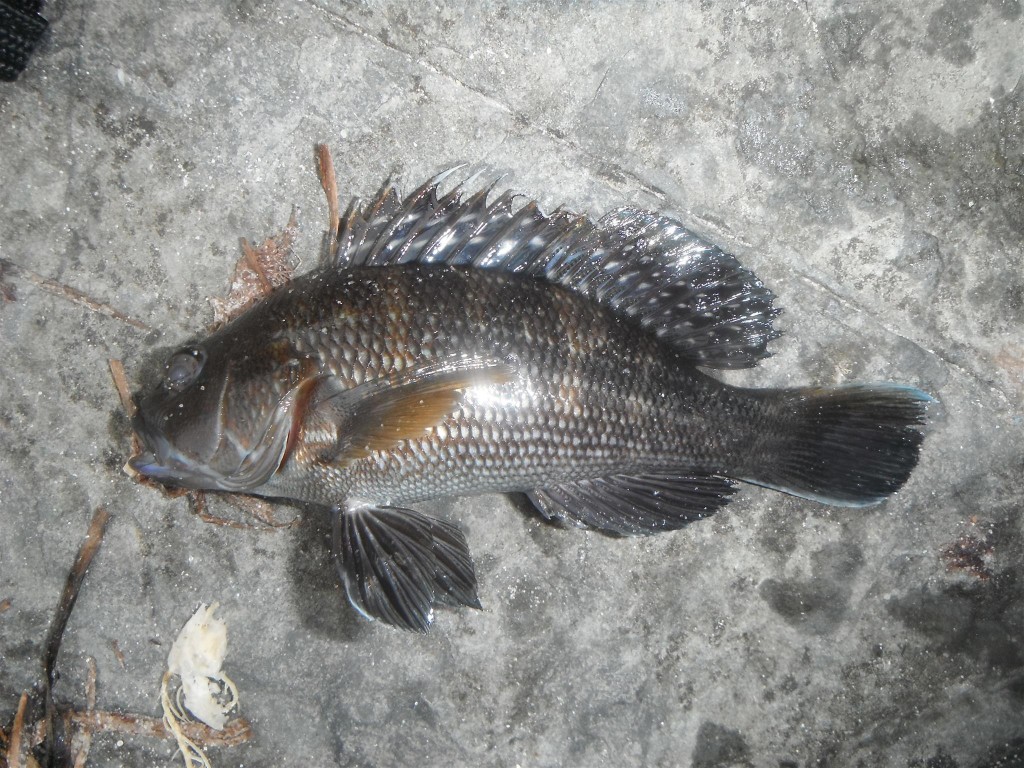 Then… something different!  A new species of sea robbin!  Unfortunately, he didn’t cooperate for the picture and I didn’t even know this was a different species until later in the trip. 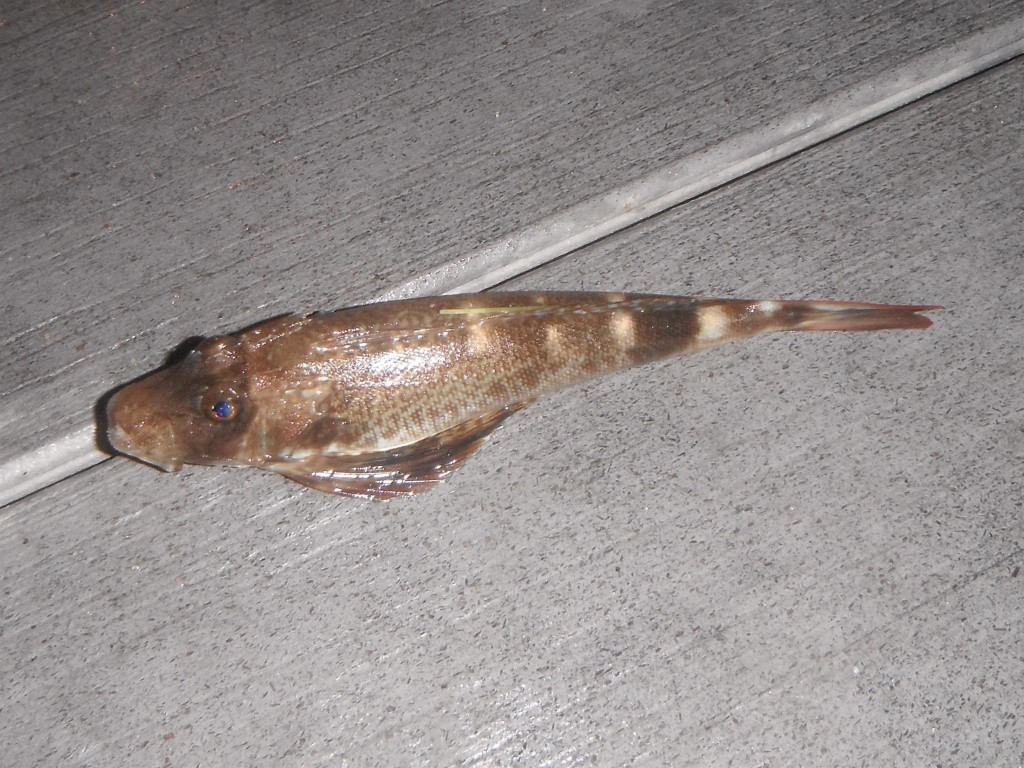 After a few event-less hours, Ken received a pleasant surprise of a lifer oyster toadfish that had eaten one of his shark baits.  After a long night, we retired to our motel.

The next morning we picked up species-hunting legend, Pat, at the train station and made our way through New Jersey’s pine barrens to fish a peculiar lake home to some obscure sunfish.  Pat introduced us to the versatility of Wawa stores and I was perplexed at it being illegal to pump my own gasoline.  I wondered what had gone wrong for that law to get passed…

It took us a while to crack the sunfish code, but we did.  As expected, a lot of fish were clinging tight to shoreline vegetation.  What wasn’t expected was how long we would have to sit our baits in one spot for the fish to bite.  From  poking around Florida, we were accustomed to holding our bait in place for a few seconds and then moving on.  These skittish sunfish required us to hold our baits in place for a few minutes! 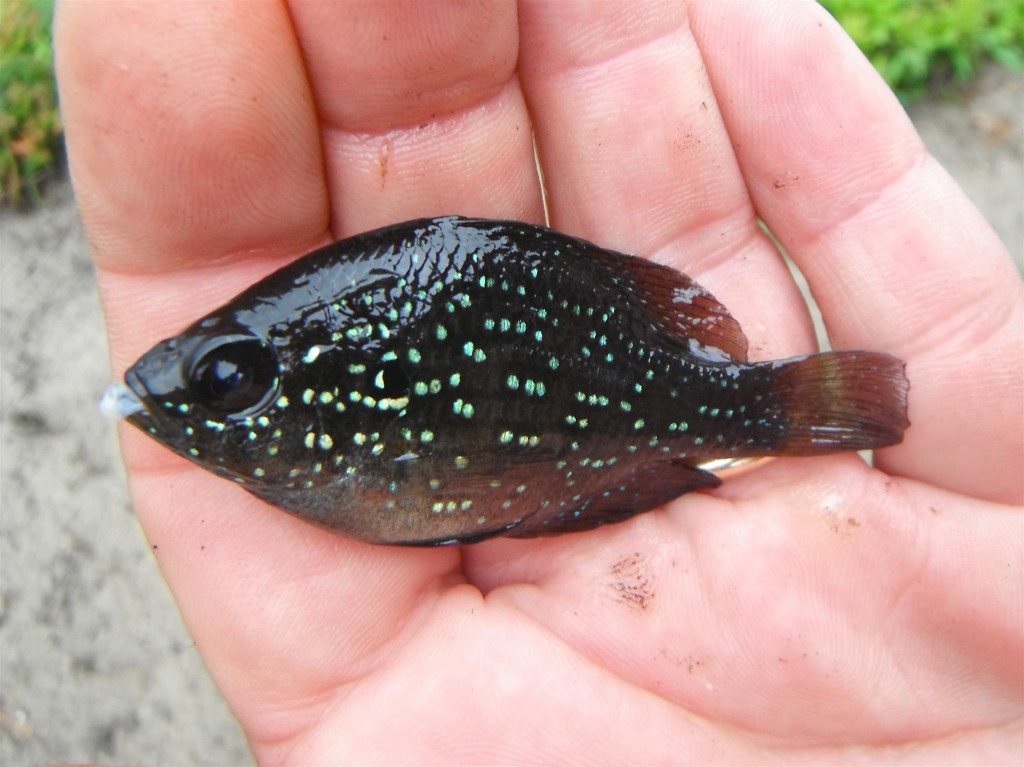 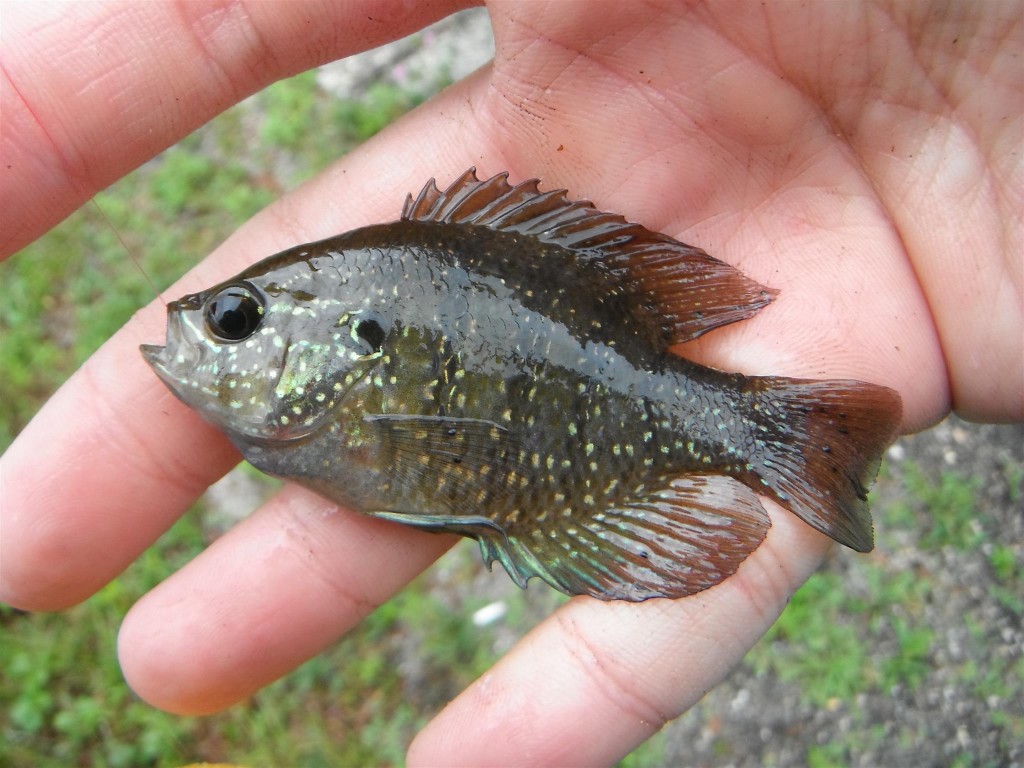 There were two other target species of sunfish in the lake:  mud sunfish and blackbanded sunfish.  Pat or Ken mentioned that mud sunfish liked to hang our near wood.  It was almost too perfect when I dipped my bait next to a broken piece of wooden dock and this guy came out! 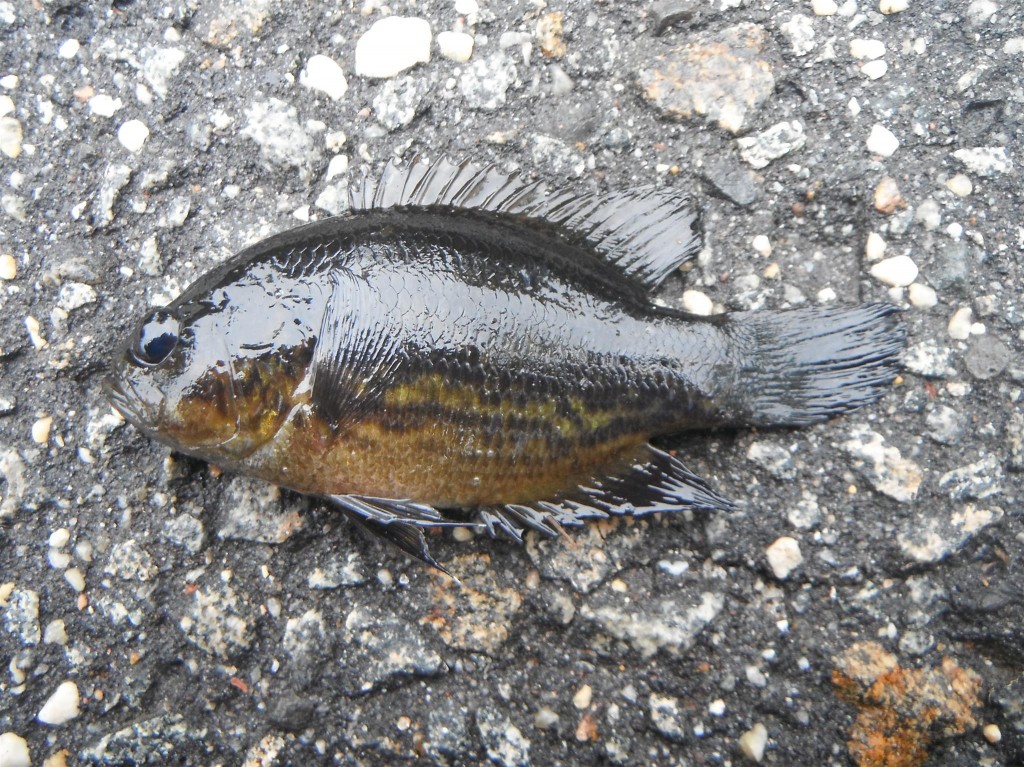 The blackbanded sunfish remained a mystery to us.  Ken said he had spotted some darting away, but that was it.

As evening fell, we met up with Pat’s friend Matt who graciously offered his expertise in the area of targeting flathead catfish.  First on the agenda was catching live bait.  Amidst the sunfish were some colourful spotfin or satinfin shiners.  Unfortunately, in the fading light and rush to make bait before dark, I wasn’t able to take a good picture.  For now, this fish shall remain unidentified. 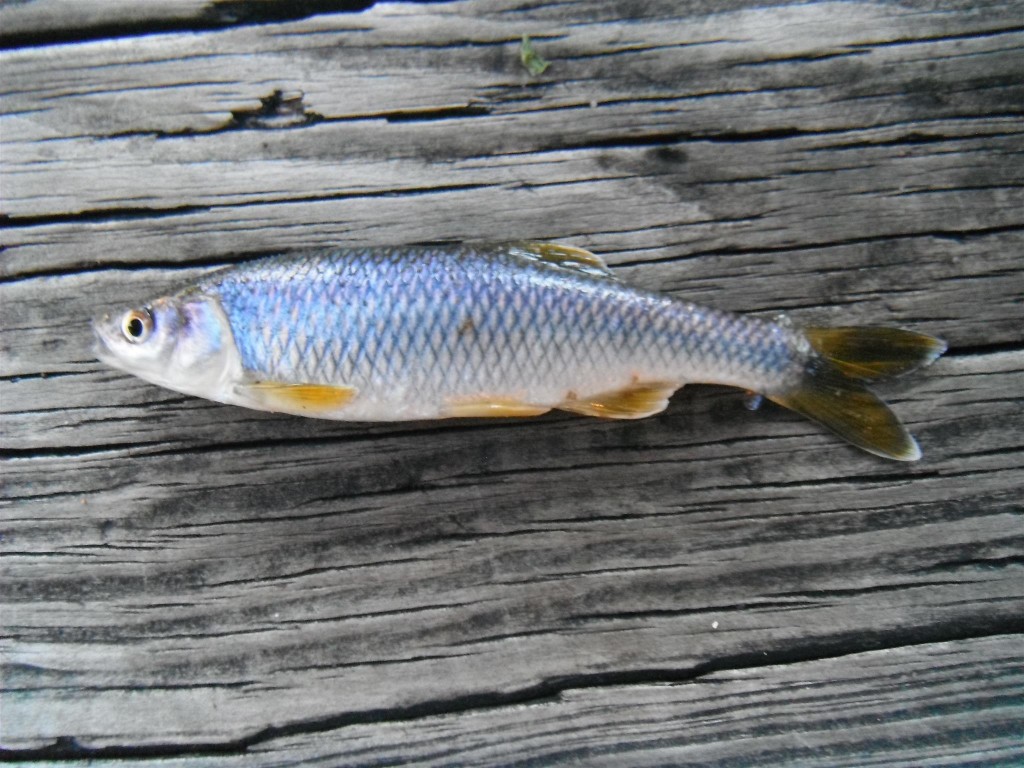 Edit May 10, 2016:  Based on the yellow fins on this coloured-up spawning fish I’m going to call it a spotfin shiner.

However, a definite new species did come out of the bait session! 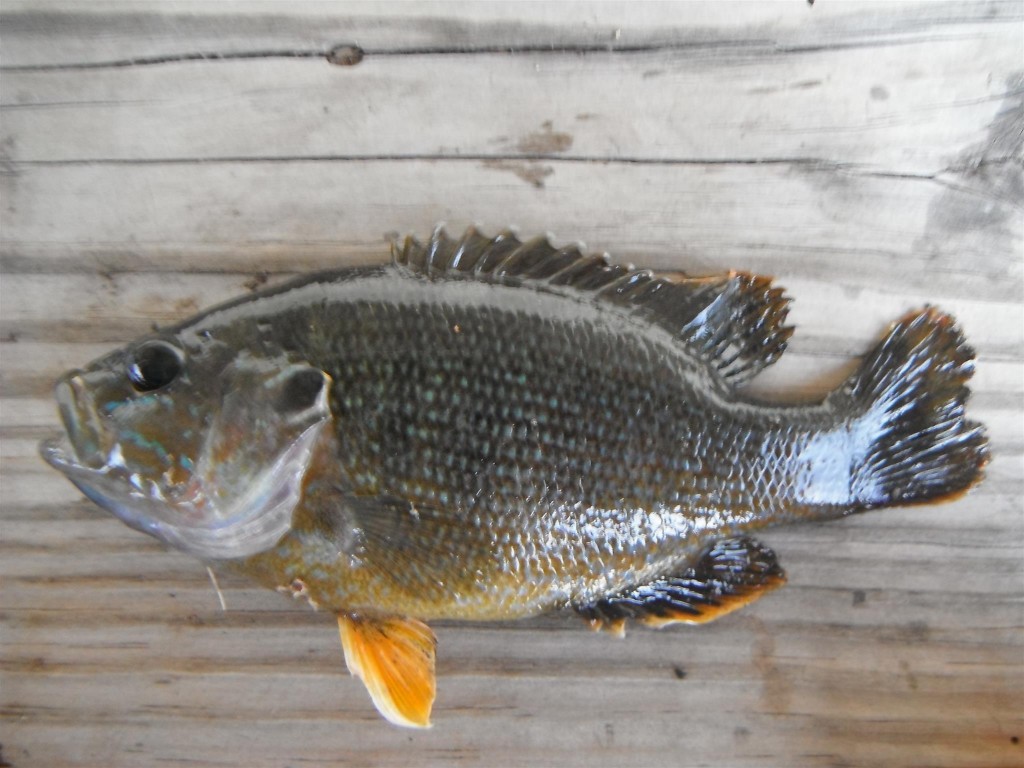 As night fell, I cast out two heavy rods with live sunfish for flathead catfish and also dipped a light rod into the shallows in search of one of Ontario’s unicorn species… American eel.

Eventually, one of the sunfish was picked up.  On beefy 60lb tackle, I reamed the fish off of the snaggy bottom.  Matt’s expertise delivered! 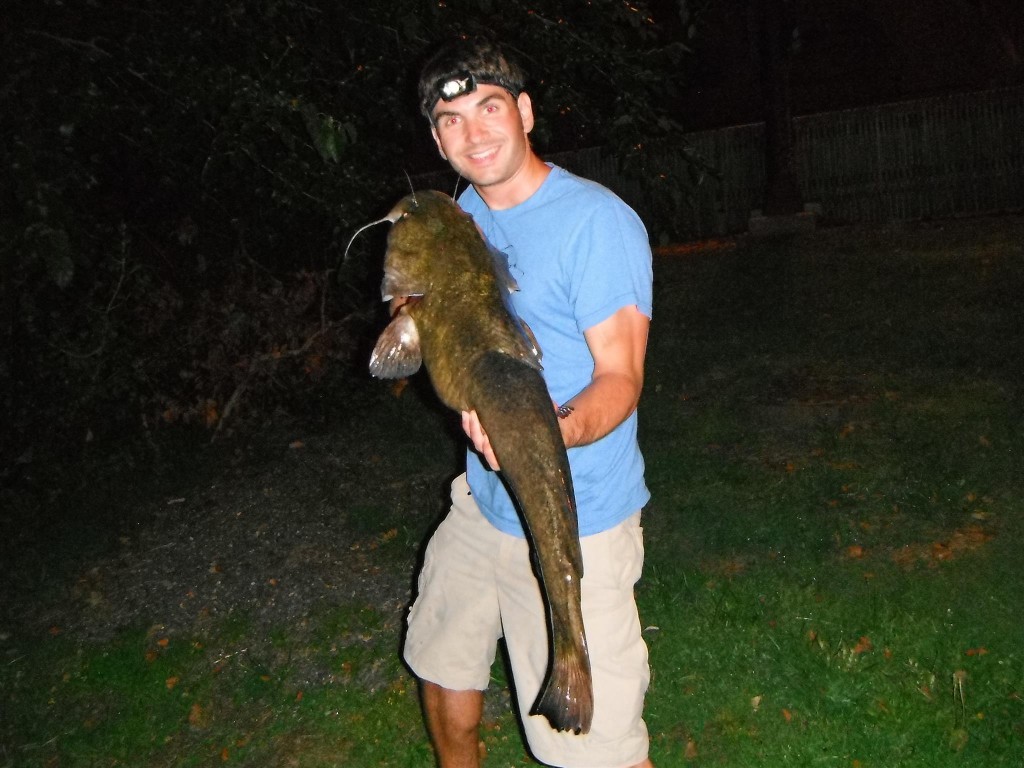 Many thanks to Matt for this awesome catch!  The cherry on top came soon after when my light rod started bouncing… 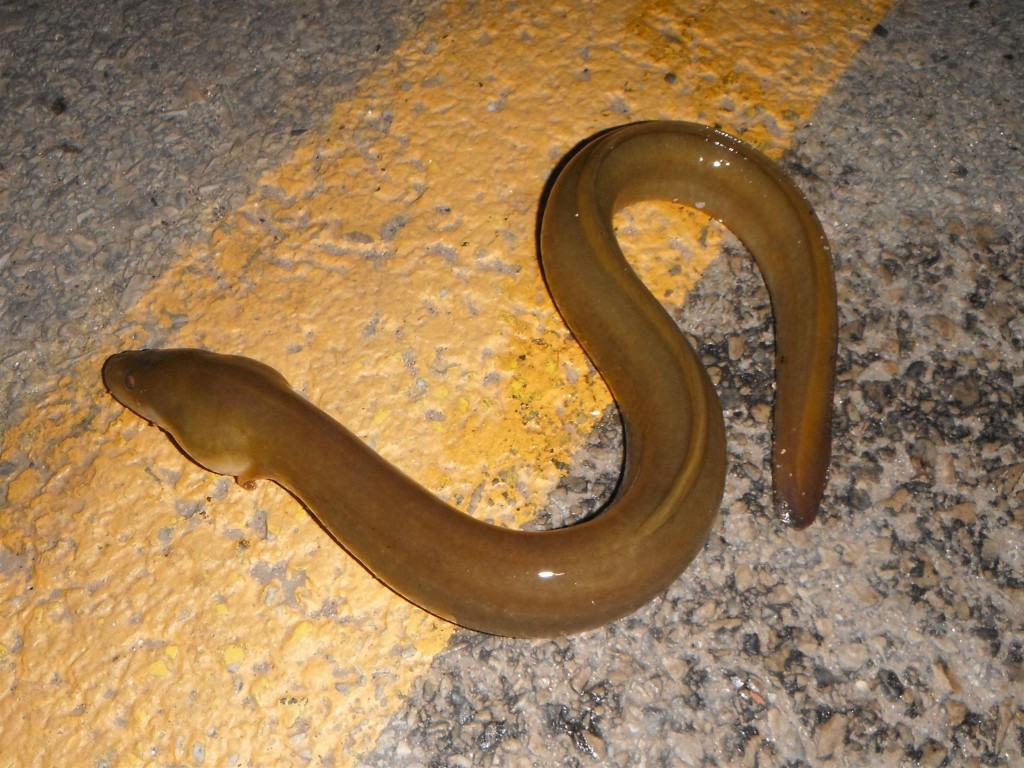 I was quite giddy at this point.  American eel was a species that had garnered an aura of mystique for me back home.  To have actually caught one was quite the moment for me.  Thank-you again Matt!

Ken was also successful with an even larger flathead catfish.  We moved to a small creek in search of his American eel and, after some heavy rain and creative bait-making, were successful.

The next morning, we fished two jetties.  At the first one, I snagged something big on the sabiki rig that wouldn’t stop pulling.  It was likely a ray of some sort. 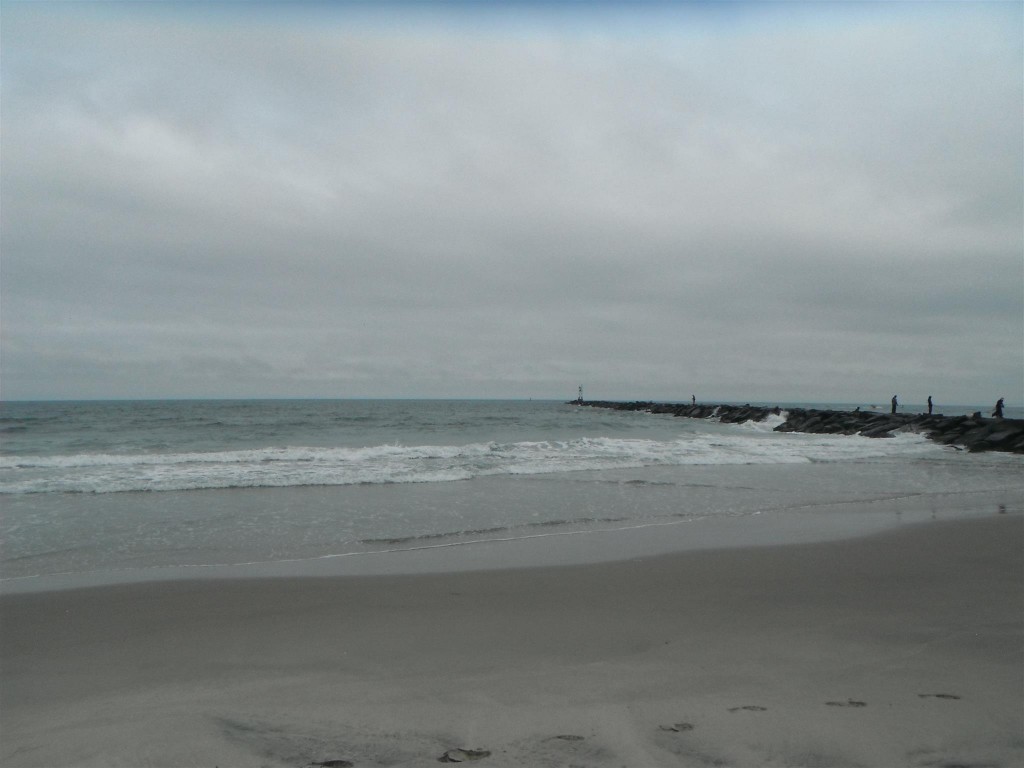 At the next one, I was enchanted by someone catching tautog using green crabs and a spark plug as a sinker.  He was doing quite well, but without the right bait it simply didn’t work out for me.  They are such a cool fish and I can’t wait to go back here with spark plugs… errr… green crabs and defeat one!

That evening after Ken met up with some friends for dinner, we planned to try the marina spot again for dogfish.  In our exhaustion, there was a gps mix-up and I drove us to the wrong spot.  Oops!  We lost a good deal of fishing time, but we eventually got to where we needed to be.

Unfortunately, we found much of the same.  Lots of black sea bass and no dogfish.  Later in the night, I received a consolation prize!

He was pretty cute! 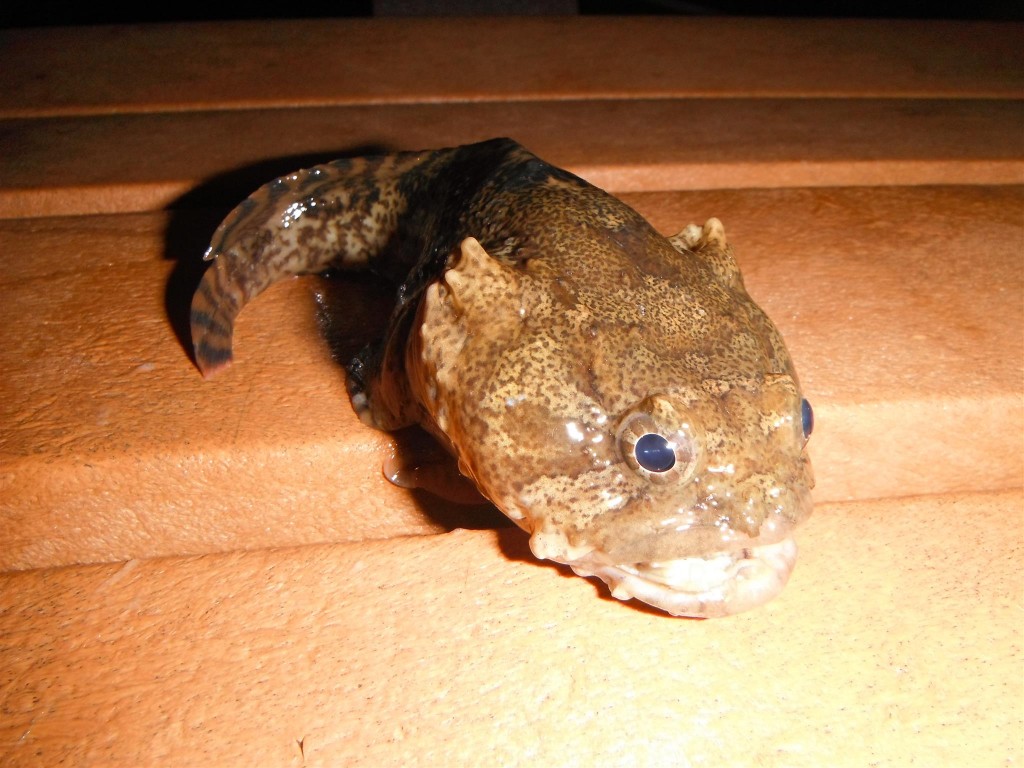 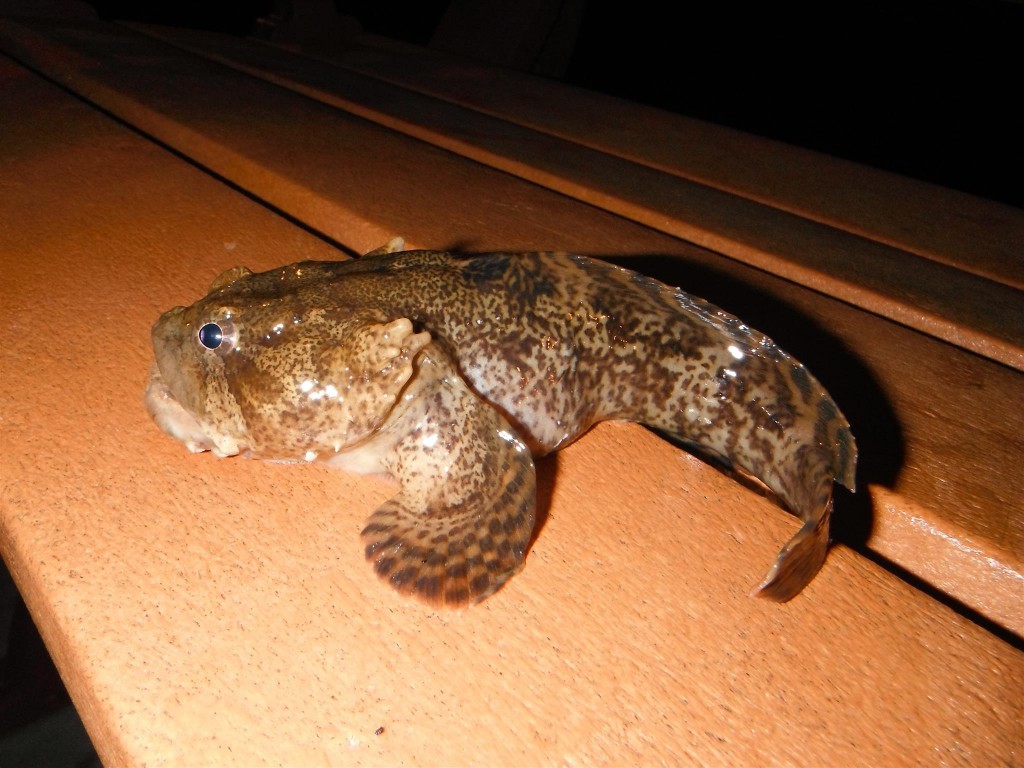 On our way back to Toronto the next day, Anthony agreed to meet with us and help us catch a new species.  He had a great spot for cutlip minnow and it delivered!  Thank-you Anthony! 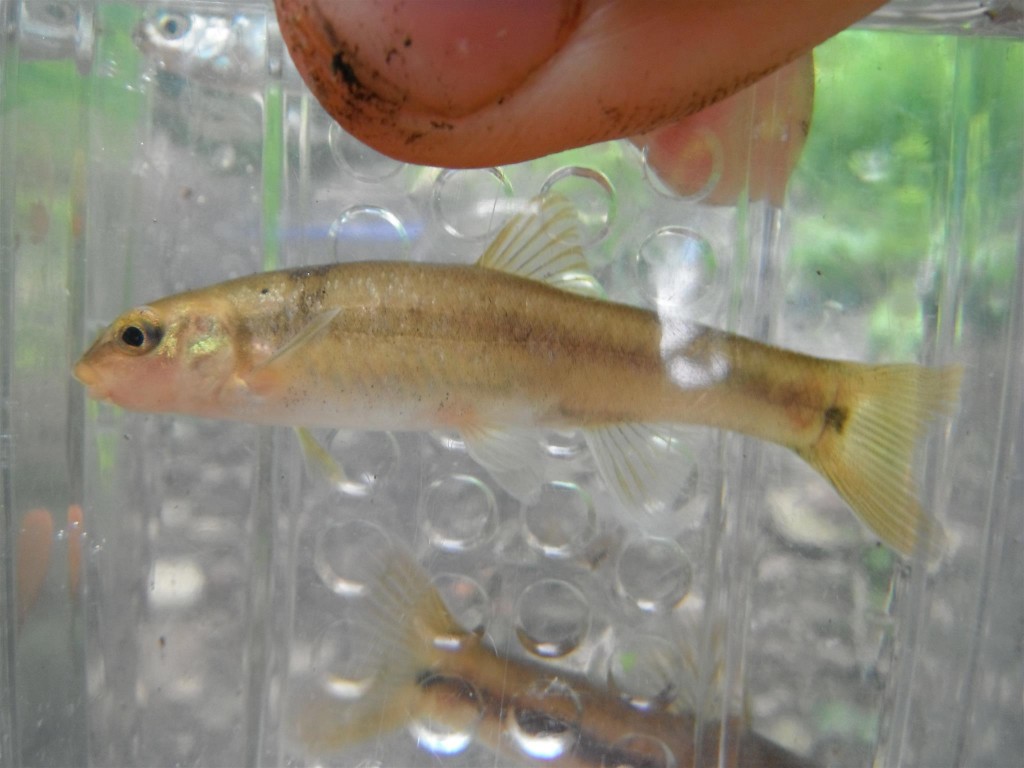 I also somehow caught one of these… 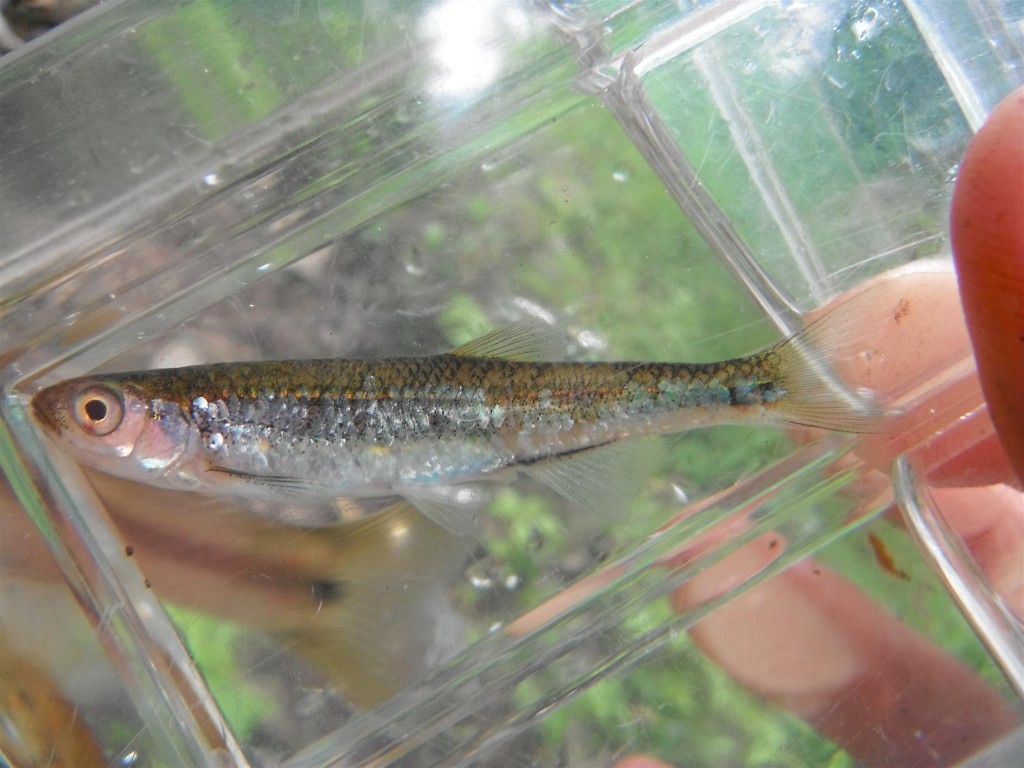 I’m still not sure what it is, but our initial thoughts of it being a rosyface shiner doesn’t agree with its snout length.  It also can’t be a comely or carmine shiner. Perhaps it is simply a fancy-looking emerald shiner.

Edit May 10, 2016:  According to sampling data on NANFA this fish is a rosyface shiner.

I owe a lot of thanks to Ken, Pat, Matt, and Anthony for over ten life list entries from this short trip!  I’ll be back for the picky tautog though, hopefully with some green crabs!