Even though Wendy had caught me cheating with Luna and Layla yesterday, she took me back! She even brought one of her friends along to meet me. Some say if you can win her friends over, you’ve won her over. 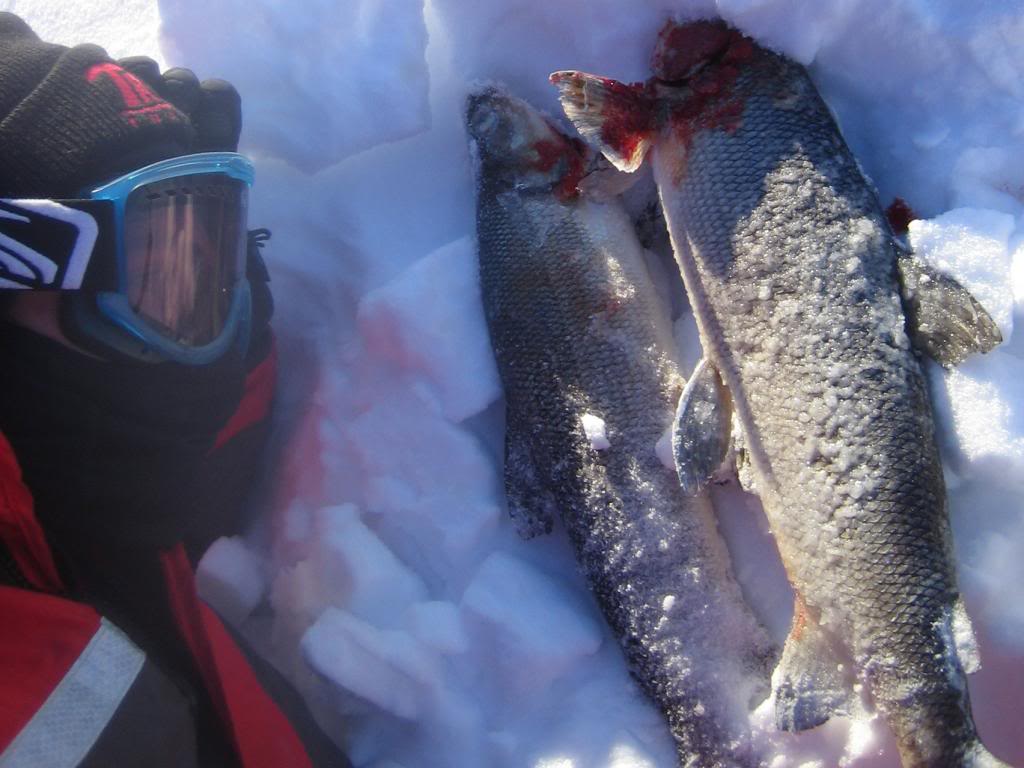 The day started off dead slow for me and I missed a good chunk of rising trout trying to get my frozen camp stove to light. Going off of the nasty forecast, I was all bunked up in my hut, working 2 lines as usual. Early in the day I lost one trout at the hole when it tangled up in my other line. Much later in the day, I had another trout on briefly but lost it on its initial run.

I had been pleasently surprised by the weather. It was around 2pm when I decided that it was much too nice out to be inside the hut. I packed everything up walked to a spot I’ve been meaning to check for a while.

When I fish 40 feet of water one of three things has happened:

2) I’ll bounce a bad boy on bottom and see marks come look at it. Then I’ll switch to a small jigging rap to catch the dink perch that they are.

Today, it was number two. I started with the bad boy and the usual marks showed up to investigate. Like usual, they didn’t bite the bad boy. So, like usual, it was time for the jigging rap. I worked the jigging rap for about five or ten minutes and somethign rose up a few feet to whomp it. I set the hook,and felt something for two seconds before loosing it. Something felt different… it wasn’t the usual weightless dink. Now my head was thinking it could have been a small burbot or jumbo perch. I decide to stick around and find out.

Ten minutes later I get a similar whomp. A few cranks in, I knew exactly what I was going to be getting on the ice. Effortlessly coming up to the hole, headshaking along the way… it could only mean one thing.

It took all of five minutes to get the second one.

Then I stuck around for another two hours with not much to speak for. I accidentally snagged one in the pectoral fin and lost another.

I’m just glad Wendy took me back, those lake trout think they’re all that.