Over the past three years, fishing has meant quite a few different things to me. It has been a means to a multitude of ends. A means to adventure, exploration, solitude, and learning. A means to connect with something real in a world of invented entertainment.

I have fished for all the reasons above and more. However, when it came to the most primitive of all fishing’s pleasantries, simply bending a rod, the Fall 2014 salmon season took me to heights I never thought possible.

At the worst, it was hours of solitary bobbing around in my kayak enveloped by the grandeur of Lake Ontario. 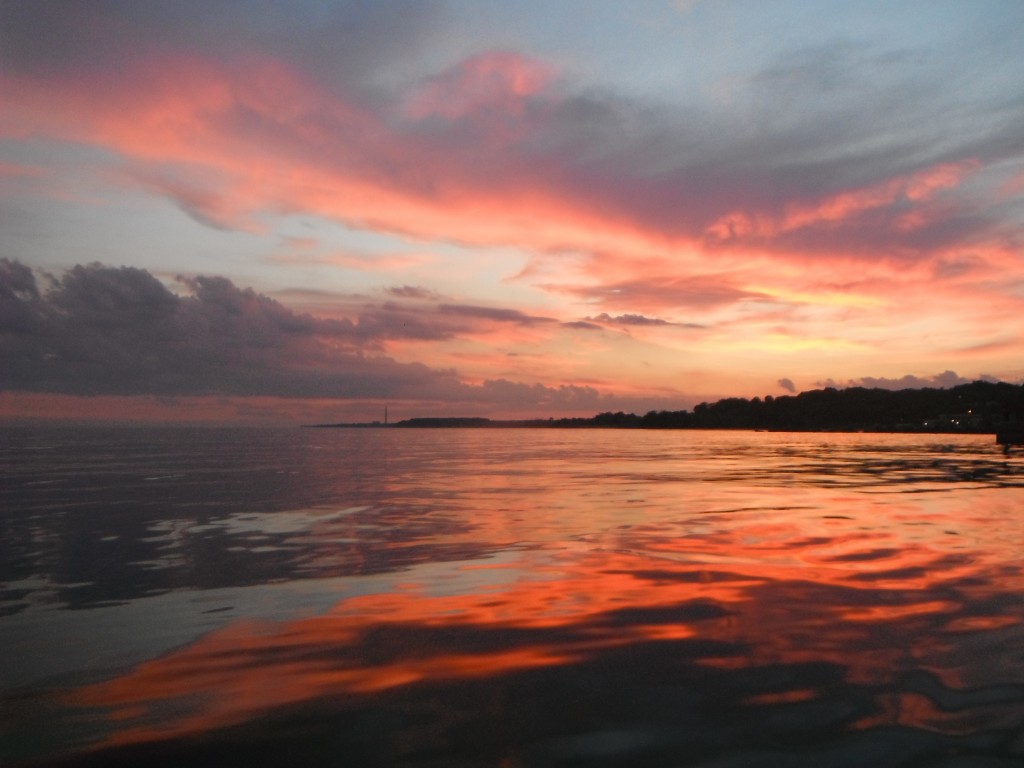 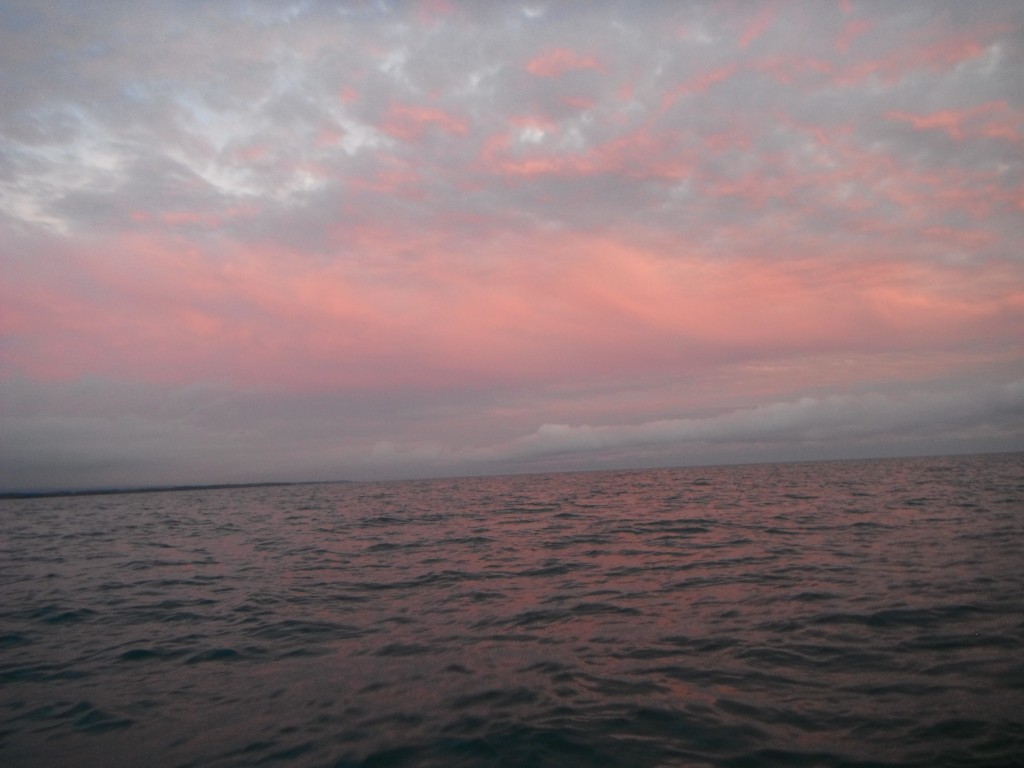 At the best it was near 20 fish evenings of the lake’s mightiest predator, the Chinook salmon. 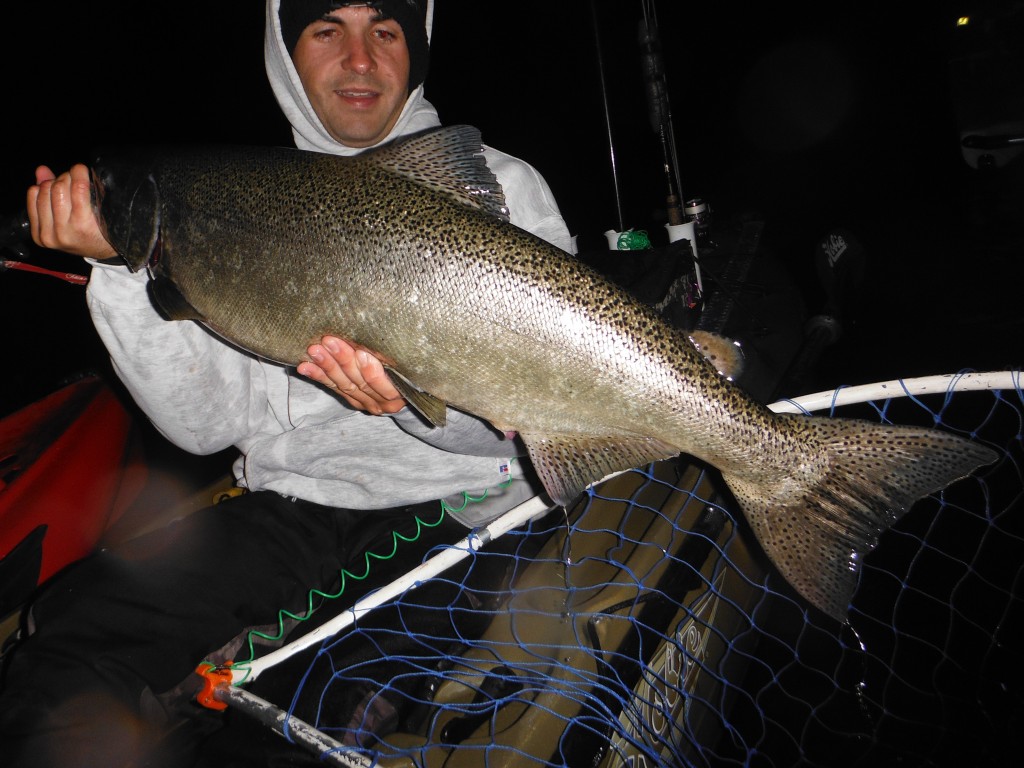 It’s hard to pin my absolute highlight of my past three years of fishing. What I can say is that the evening of September 6 I found myself floating under a clear sky and full moon on a glass-calm Lake Ontario. The tail end of the Perseids meteor shower slashed the sky above. The silvery glow of the moon teased my eyes with the dark silhouettes breaching all around me. Their splashes filled the otherwise dead calm.

I was alone and surrounded by kings. 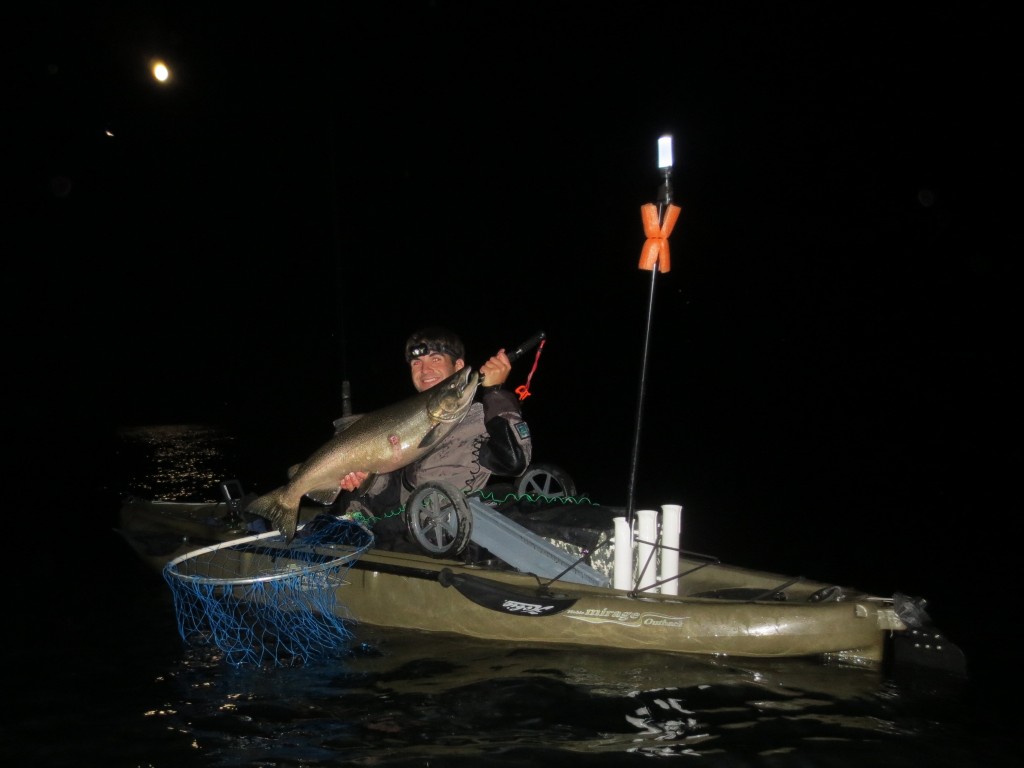 Rewinding back to mid-august, things began as they always did: waiting for the salmon to arrive. One choppy night a juvenile ring billed gull took refuge on my bow as I trolled fruitlessly out from a river mouth. 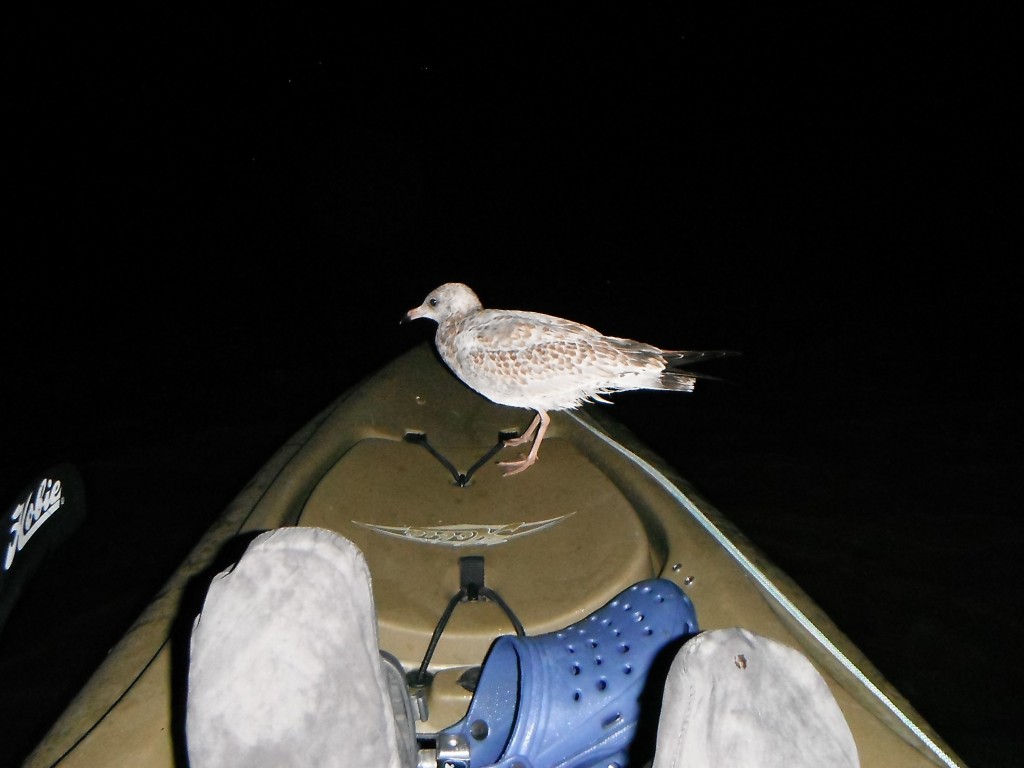 Eventually, during the last week of August, the stagers began broadcasting their presence. I saw them surfacing off to the side of the river mouth and, while I didn’t intercept a fish in that evening, I was able to hook and land two absolutely chrome salmon the next morning from that side of the pier. 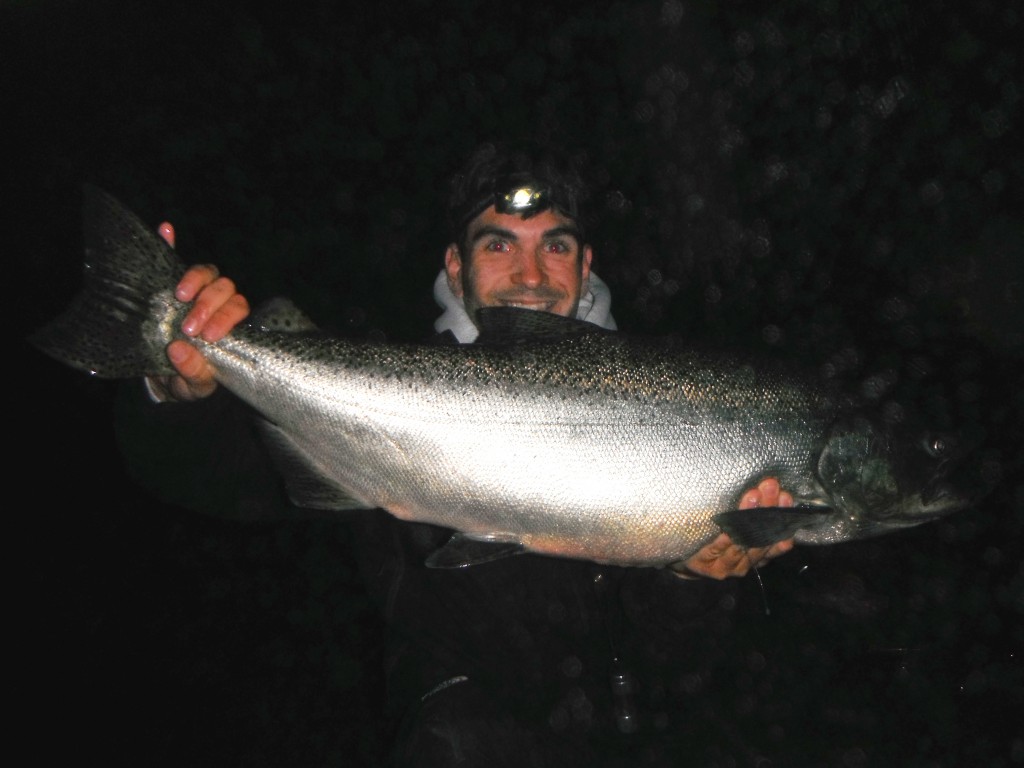 Action was hit or miss until a big rain set things on fire. It was this night I went 19 for 32 on the Chinooks. I hit a chain for three fish on three consecutive casts and it was taking me longer to land a salmon than it took to hook the next one.  Returning another night I hit my best chain of five fish in five consecutive casts! 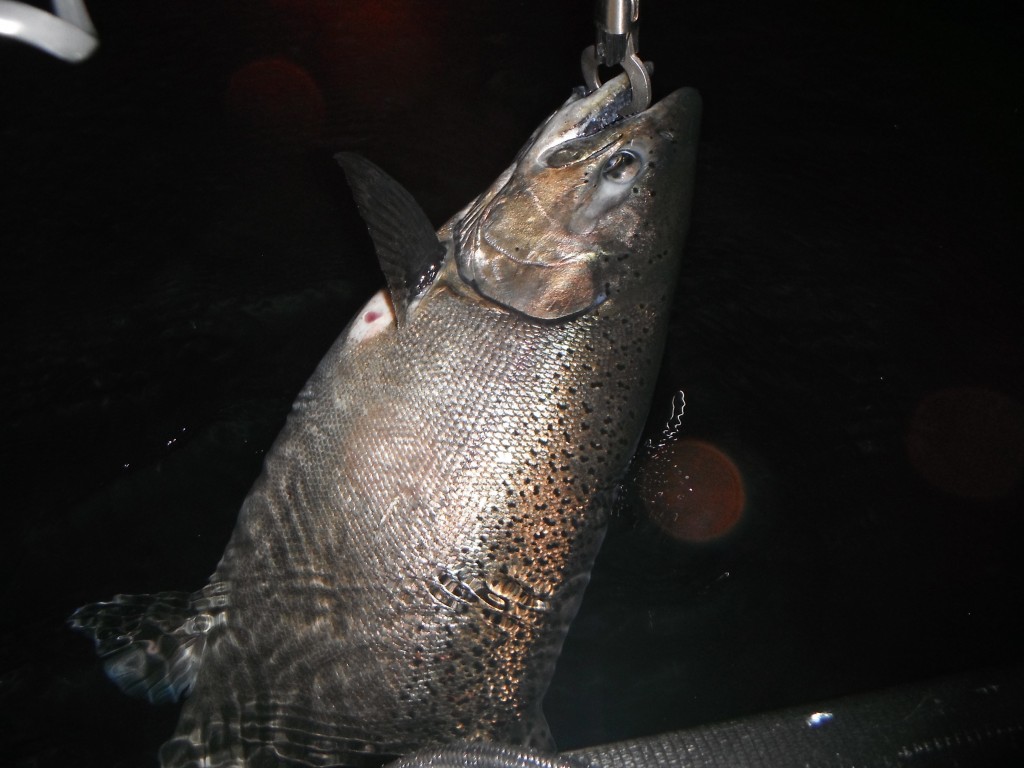 Throughout the month I stuck to the same lure I had started with, without fail. A 3/4 oz. Moonshine spoon with a green glow. Different paint colours and glow patterns seemed to work all the same.  While most of my hits occurred by slowly reeling the spoon just above the bottom, I did occasionally get hit while sinking the spoon and also while bringing it back up alongside the kayak.   Later in the season, I experimented with different speeds and depths and found that mixing things up on consecutive casts was productive. 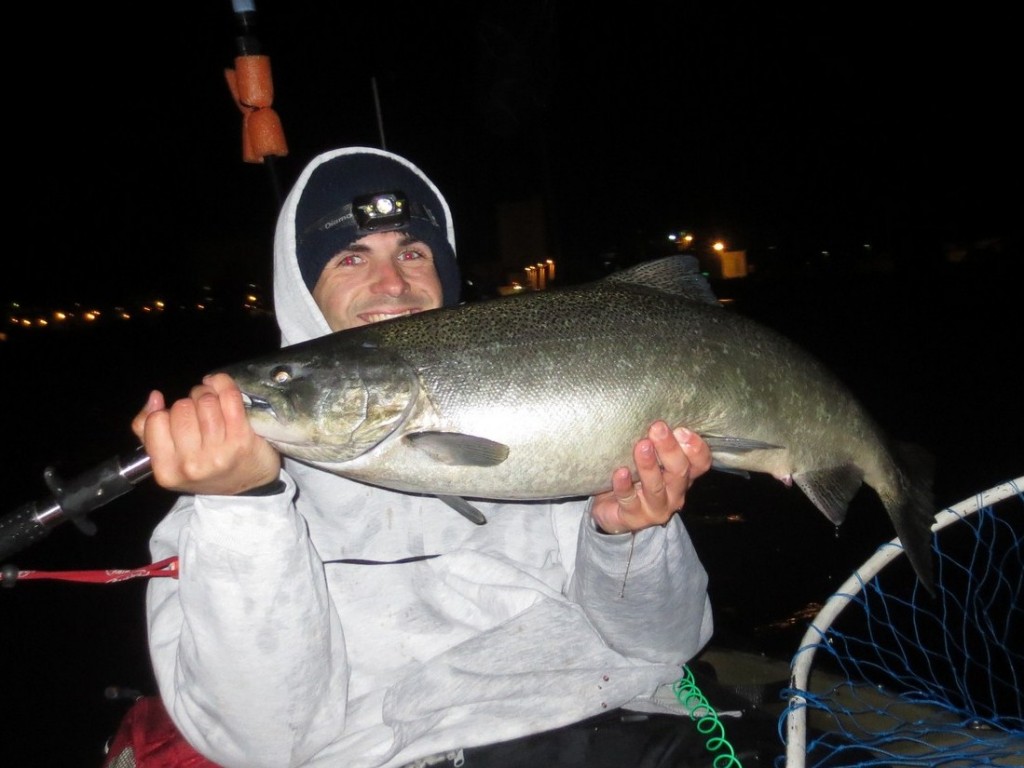 As the big rain had brought incredible numbers of active fish in, the next big rain seemed to have washed all the action away. In the span of less than a week the action returned to hit and miss. The peak was over.

I spent most of my time in the latter half of September fishing from shore, enjoying the fight the salmon provide. The trouble with the kayak is that if you’re not anchored, you find yourself reeling to the fish more than you actually feel the fish fight. I find that fighting them from solid ground is much more electrifying. 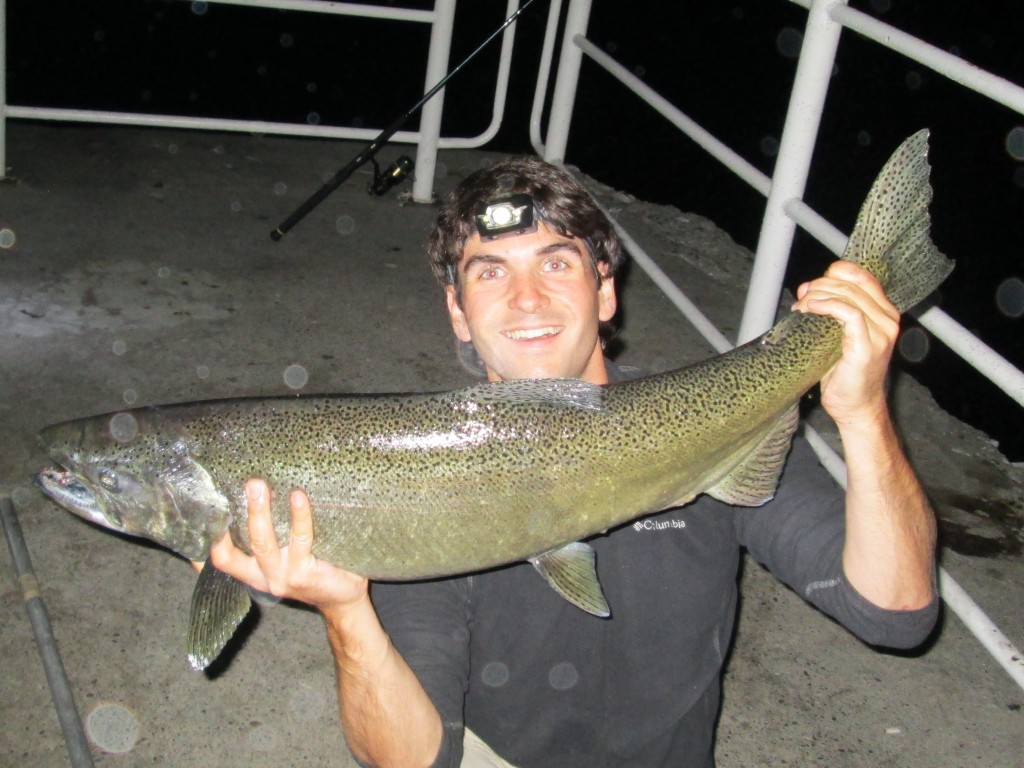 After the peak had ended I was experiencing a fish-less evening and was about to retire to the car until morning. I saw a bit of surface activity in the marina and started throwing shallow crankbaits with great success. By sunrise I had landed over ten of these aggressive stagers. At this point in the season I had landed over 100 of these staging chinook.  This sheer volume of fish took its tole on my 3000 size spinning reel, powdering the drag and forcing me to send it in for warranty service shortly after.

The two largest fish of the season measured in around the 40″ mark: 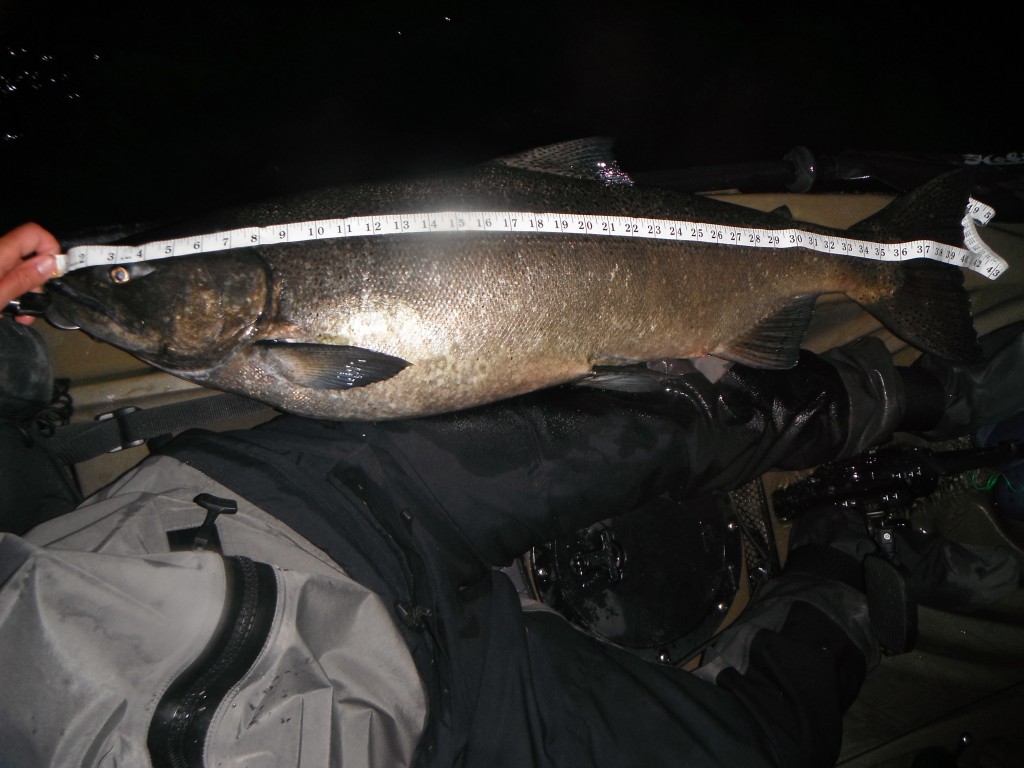 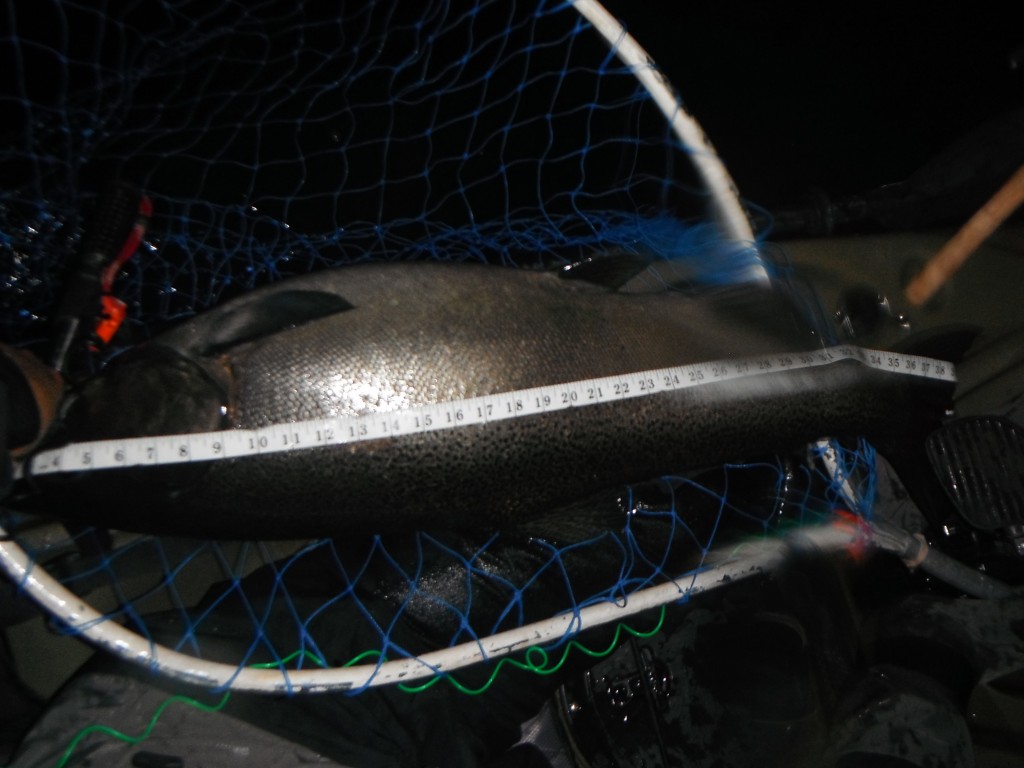 By the end of the first week of October, it was all over.  The final tally of Chinook salmon was over 110 fish landed for over 165 hooked.  Truly the epitome of rod bending giddiness here in Ontario. 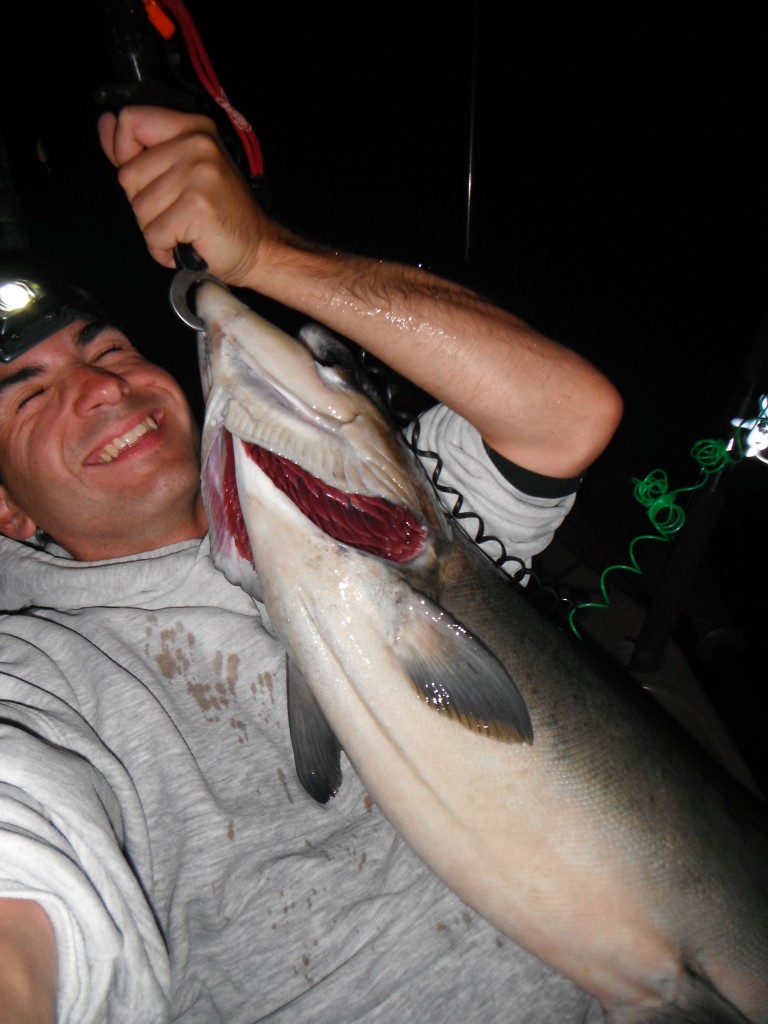