I hate one-fish days. They don’t suck as much as skunk days, but at least on the skunk day you can write the day off as a lost cause. On a one-fish day, once you get that one fish, the rest of the day becomes a complete tease to get just one more. Well, at least that’s how I think. And I did a lot of thinking today staring at my blank screen. Well, that is until I was ever so politely interrupted… 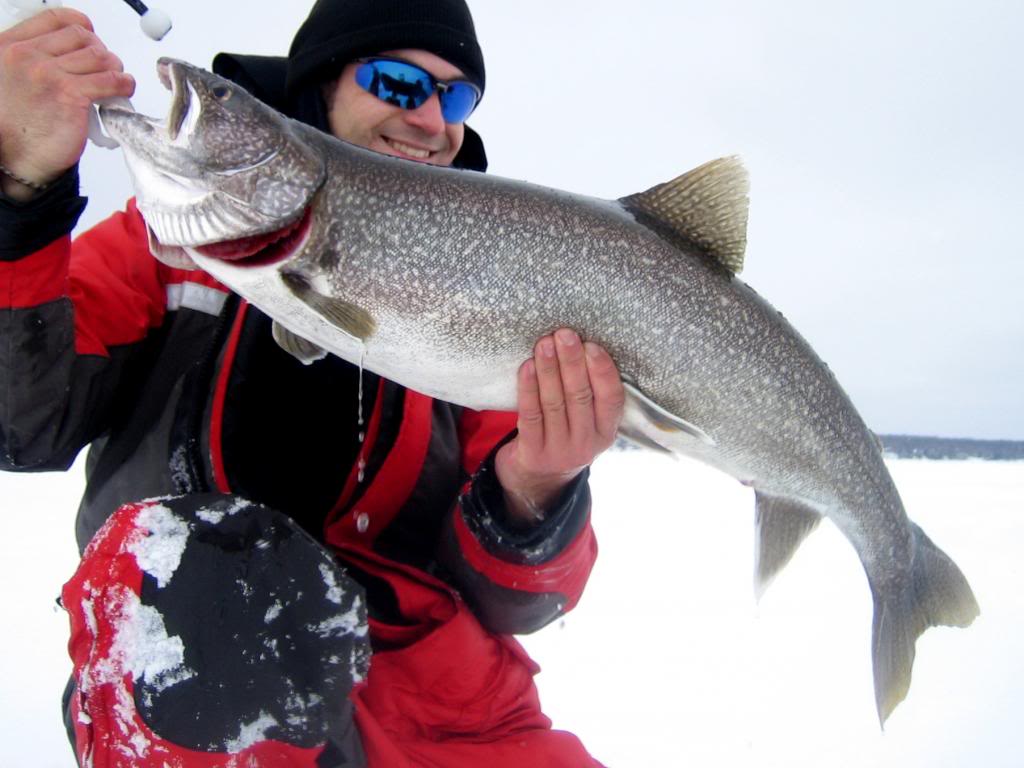 After a drawn out stalemate in the middle of the water coloumn, where the fish would repetedly take 5 feet and I would take 5 feet back, I had marked more than three fish just coming up to check out what was going on. Finally at the hole, the fish threw it in reverse gear and we had another stalemate at hand. Each headshake grazed my 4lb leader across hole’s edge. And finally, after a record amount of time, the gill plate was in hand. It was connected to my new personal best lake trout, a 15lb’der.

And that sums up the day except for some other moments of interest.

-An hour or two earlier, I had been literally wigging a Williamsspoon on bottom in 38 fow when it just took the beejeebus off and kept going. Had it grown fins? The only other plausible options were that I had hooked a good fish, or that I had snagged something in the back end. At the hole I had a 10+ lb laker with the side-hook of my Williams lodged in his belly between his anal and pelvic fins. I cannot for the life of me catch anything on this blasted lure! This is a sign to just quit the Williams and stick to the bad boys. Whacha gonna do.

-Throughout the day I had been plagued by ice freezing my braid (fireline crystal) to the line roller. The stuck line would completely throw my timing off when a fish started coming up to the deadstick. It was beyond frustrating, and each rising fish would see the bait “bump” as I desperately tried to free the stuck line and start reeling. They didn’t like it at all. I came up with what I thought would be a solution: instead of letting the rod sit with the line in the roller, I would let it sit with the line over the other side of the bail. I tested it a few times and it kept my line from sticking. However, by the end of the day I hadn’t noticed the big chunk of ice that had become of my line roller… and my 2nd legit bite of the day pulled the bail wide open and away went the fish. Lesson learned, and lesson learned.

I also got to take my rickety smitty sled out for the first time today. I skimped on the duct tape this time around. It’s wobbly but it saved me a lot of sweat today and it did not fall apart. Two victories right there.