The next morning, Pat sent us a hot tip for these striped bass.  Apparently, someone had caught a bunch on a quickly stripped fly at a particular water discharge.  I hadn’t brought any lures for them and asked George if he had a spoon.  George had all but one spoon and offered it to me.  It only took a few casts of this lucky spoon to get my target. 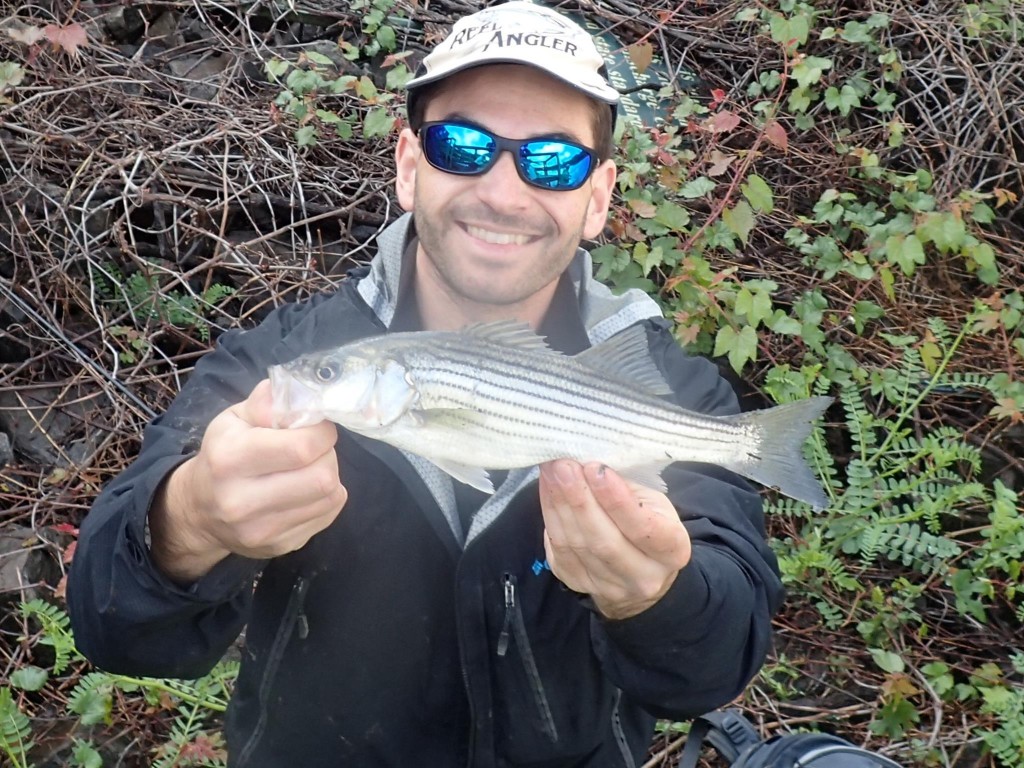 George fished jigs and swimbaits for them and caught a nice channel catfish instead.  I sure was grateful for that spoon.

As we chatted with a local, he mentioned that shad sometimes enter this area.  George needed a hickory shad for his list, so I started looking for them with bare hooks much like I had fished the blueback herring.  I had a herring come off near shore and a stronger fish break off my 3lb line.  There were some sort of shad or herring in the area!

George tied up a bare hook rig and I switched over to targetting the small fish I had spotted in the shallows. 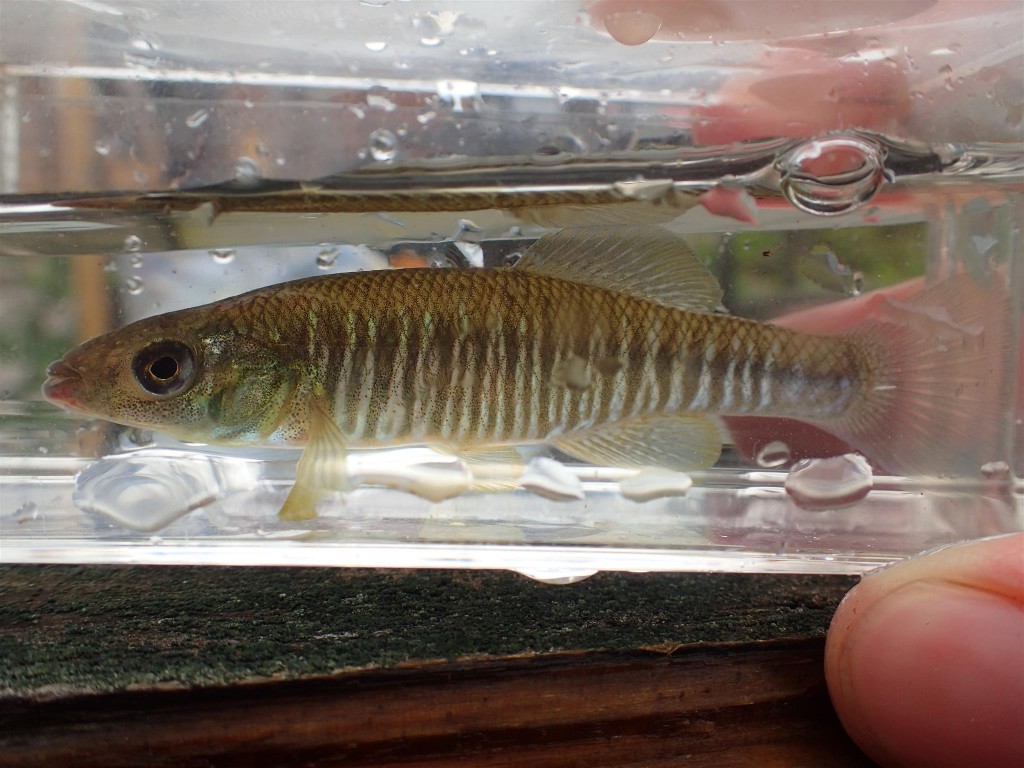 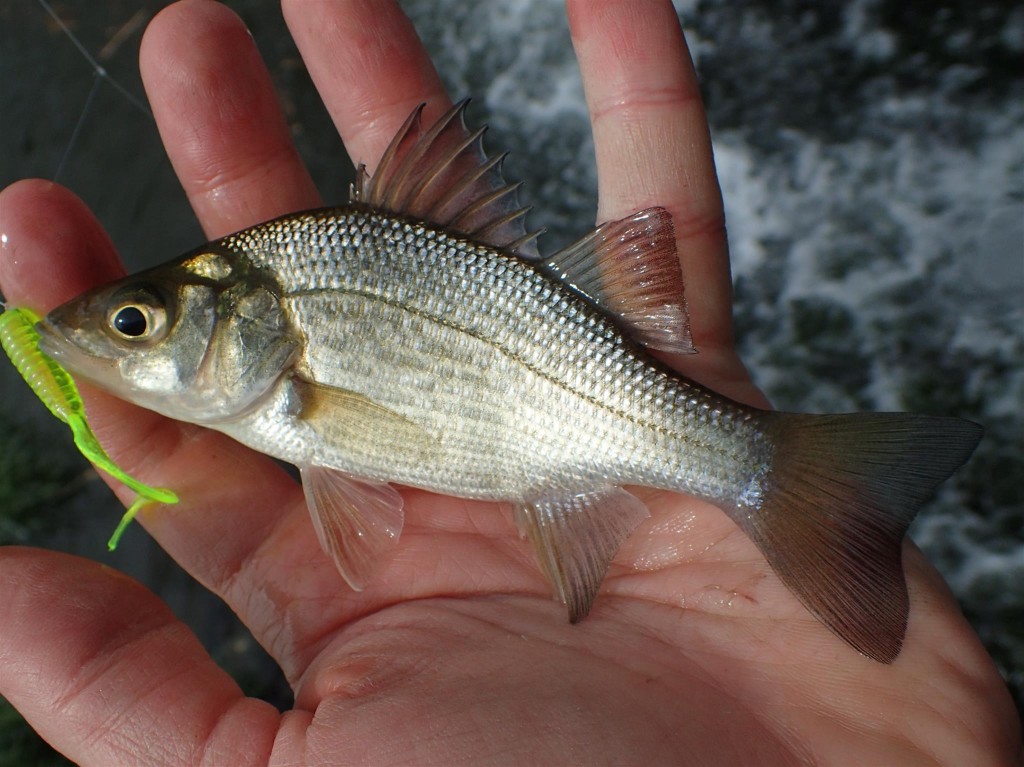 As I bumbled around, I smelled a familiar cigar in the area.  I looked to my right and there was Pat himself fishing with Ben!  What a coincidence!  Ben had arrived on a late flight and also needed to catch a striped bass for his life list.  Unfortunately, even after sharing George’s lucky spoon it wasn’t meant to be.  This would soon turn out to be blessing in disguise.

George caught another blueback herring on bare hooks and we offered our spot over to Ben in hopes he’d get one of those.

As we walked back to our car, I spotted a cat that was just too cool not to take a picture of. 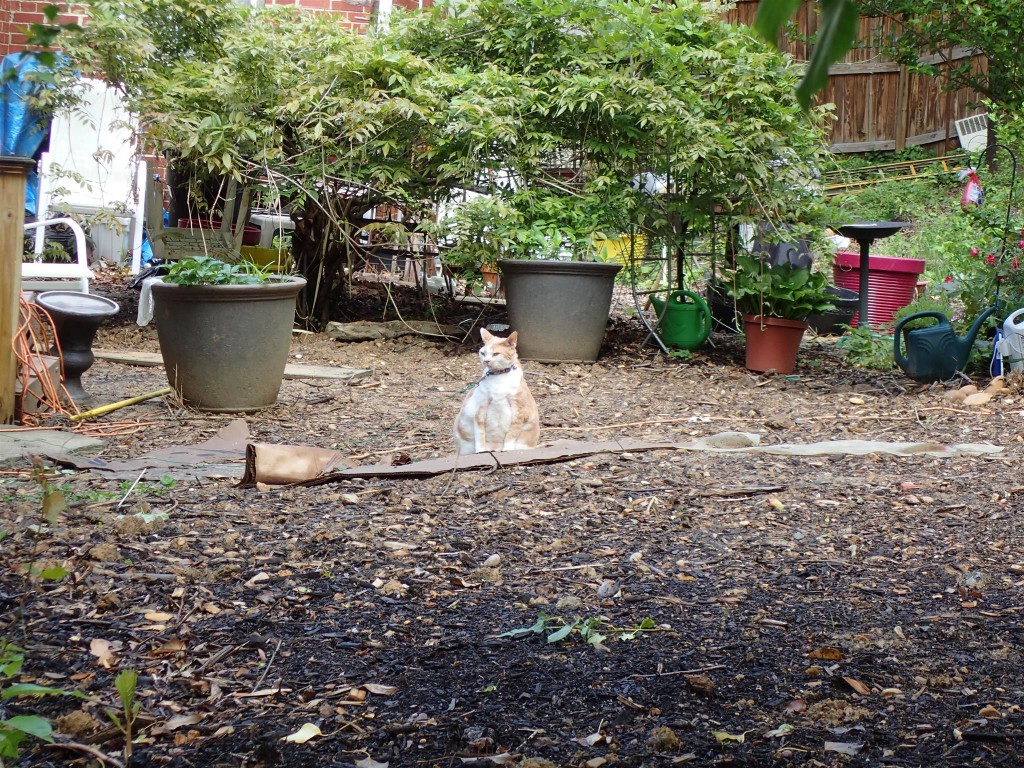 George and I moved on to a small creek Ben and Pat had suggested for the shiners we had missed yesterday. 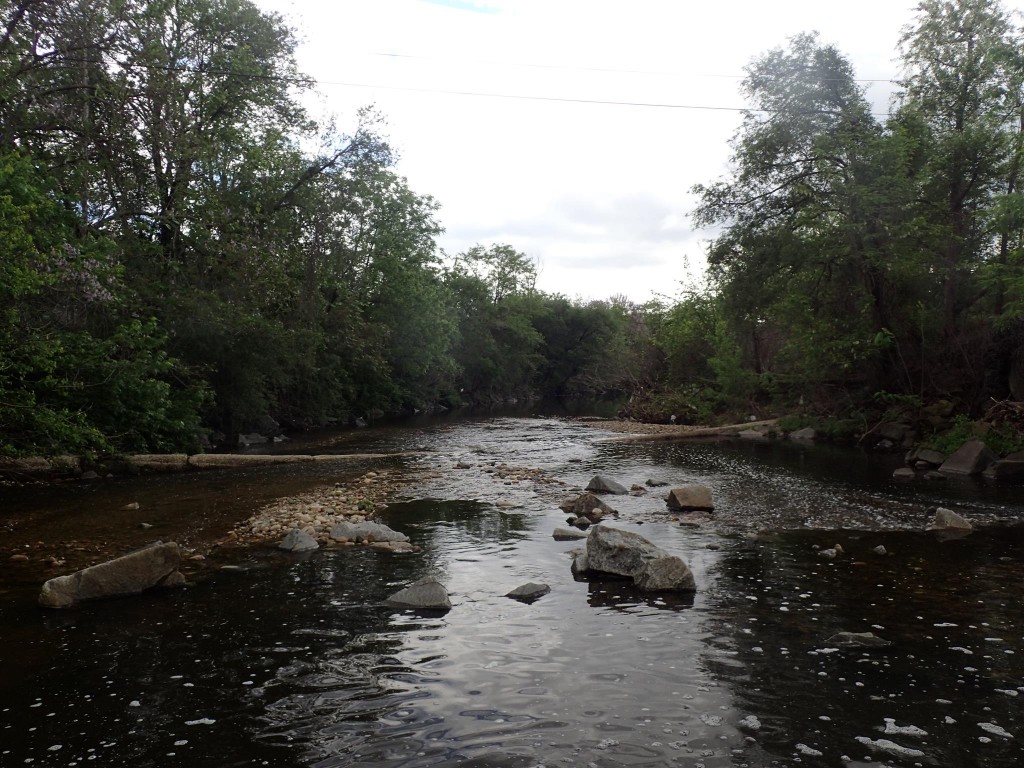 The water had cleared from yesterday’s rain, but George and I caught only redbreast sunfish and mummichog.  I spotted a group of shiners, but they would not bite. 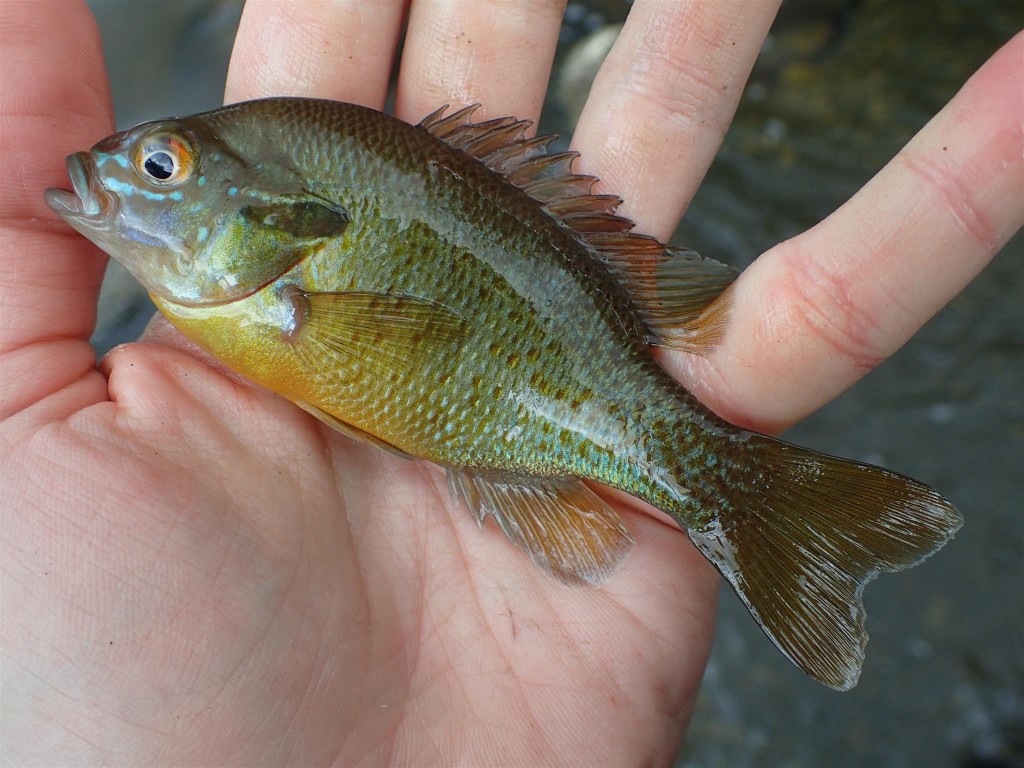 We were bummed out about the lack of shiners, but a big ol’ mummichog made for a laugh… what a wacky face! 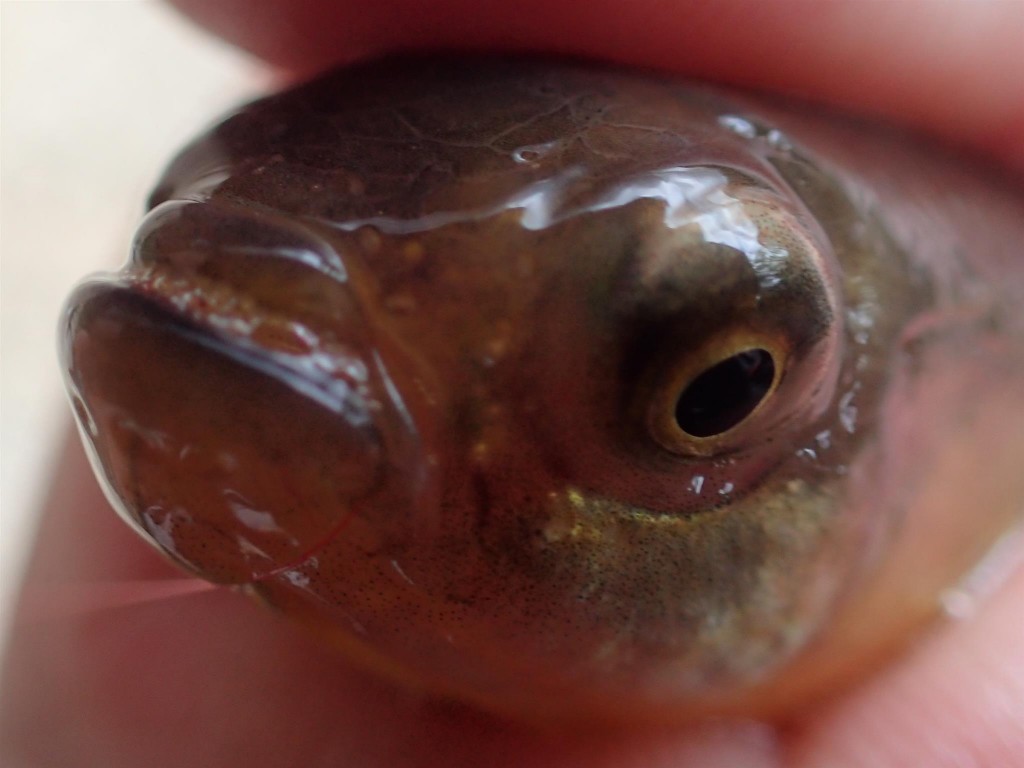 We then moved on to a remote series of ponds in search of a unique species of sunfish known as flier.  I had caught these already, so my target was the even more obscure Eastern mudminnow. 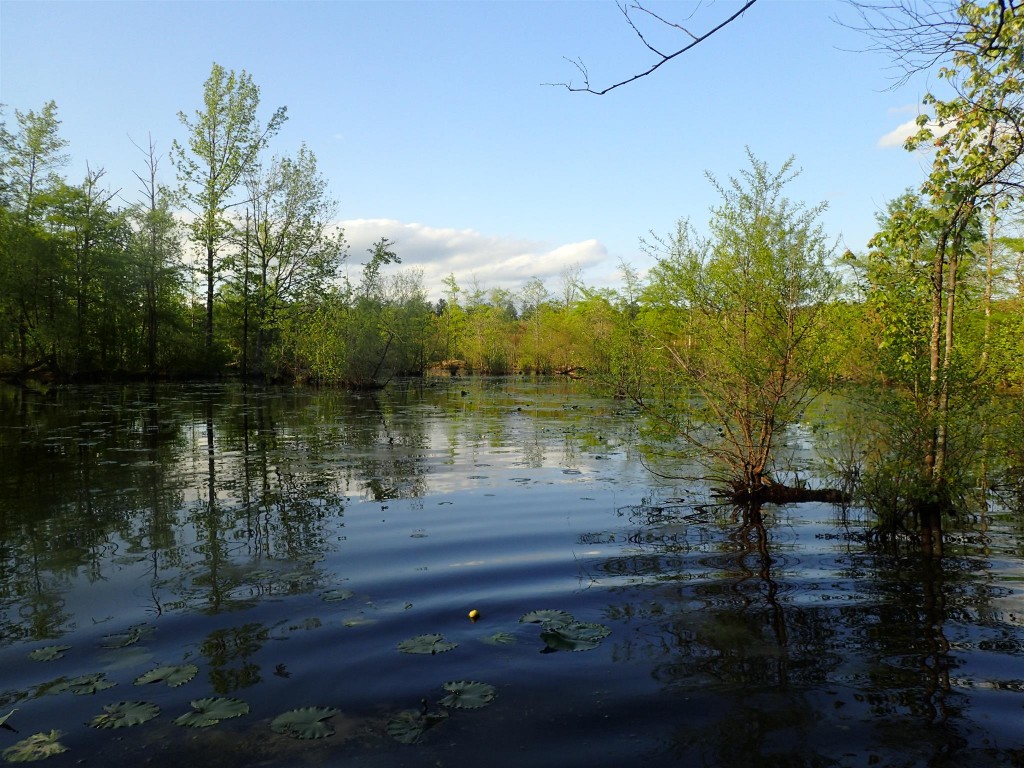 Upon arrival, there were some Eastern mosquitofish skirting in the shallows. 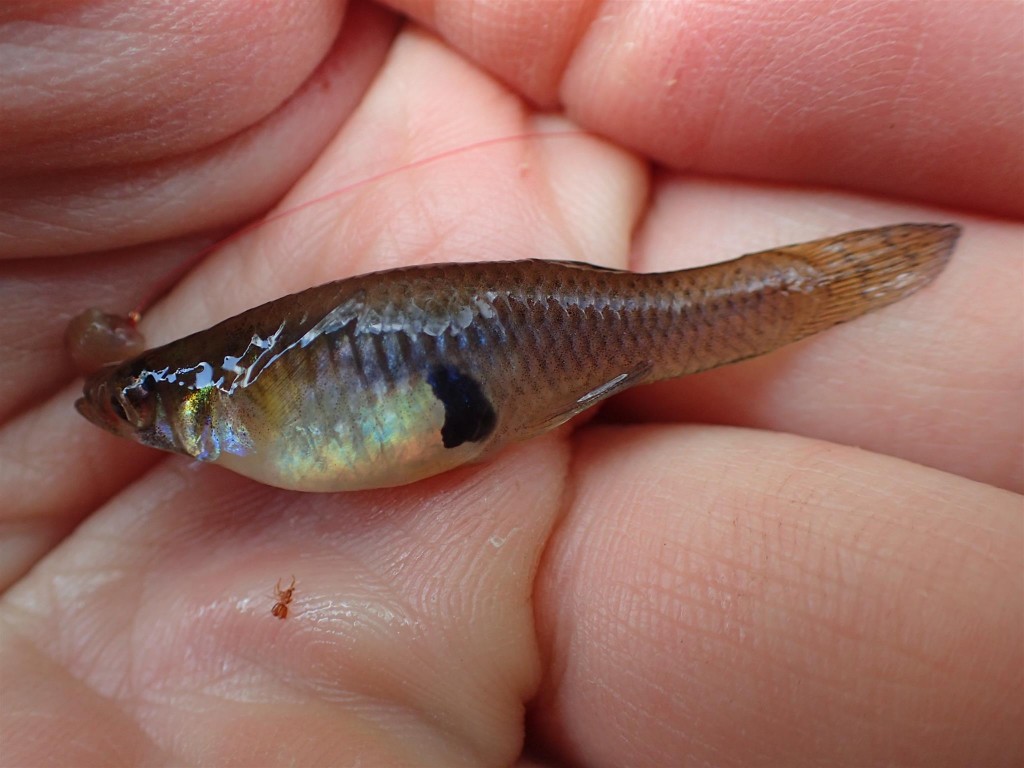 As I poked a tiny hook in the shallows, something wildly coloured darted out from under a piece of wood and ate my bait.  I had caught this species before, but I don’t think I’ll ever get a more beautiful specimen than this one. 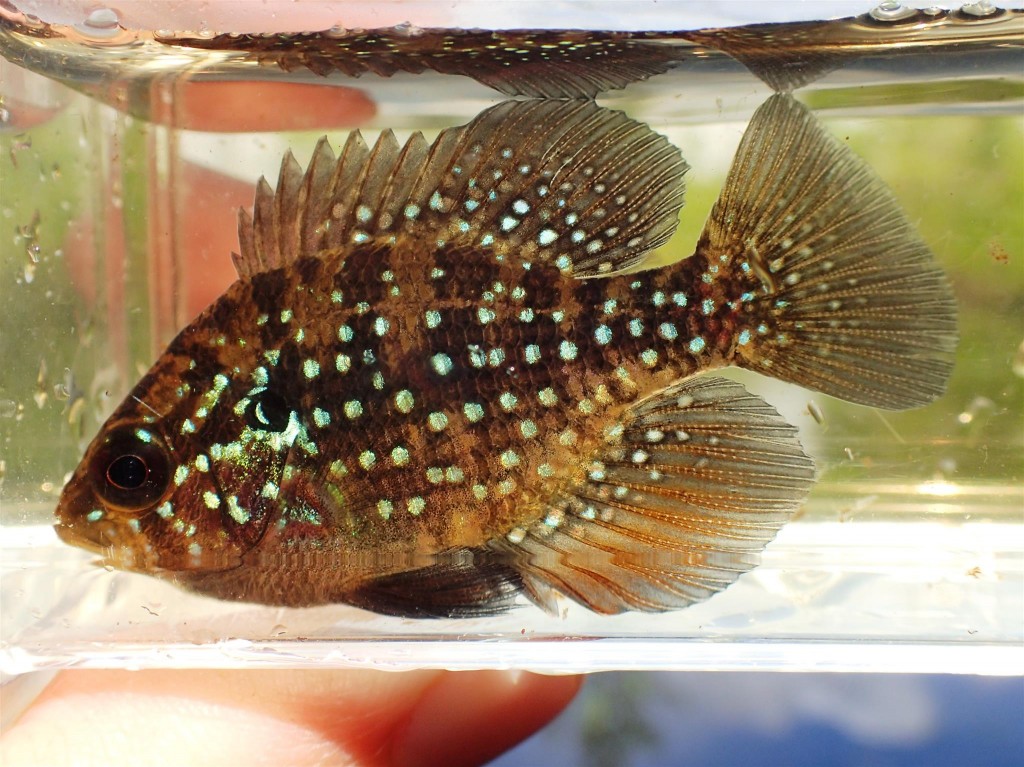 In my search for mudminnow, I ended up with two more of these gems. 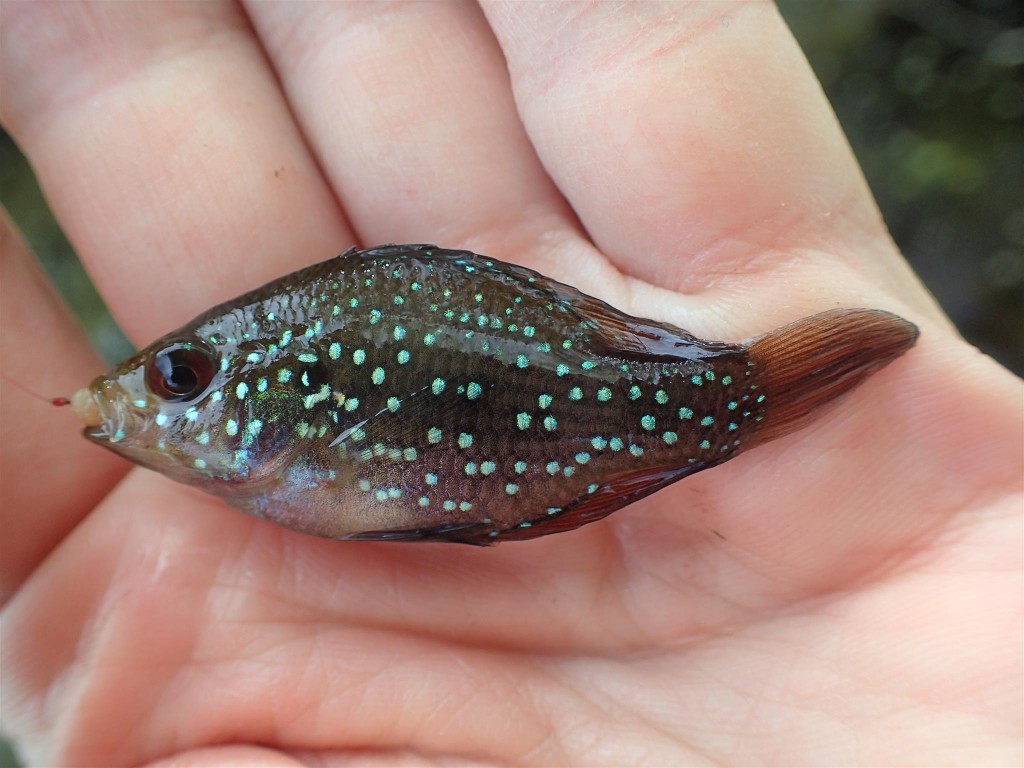 I poked around in the deeper water and was rewarded with a flier. 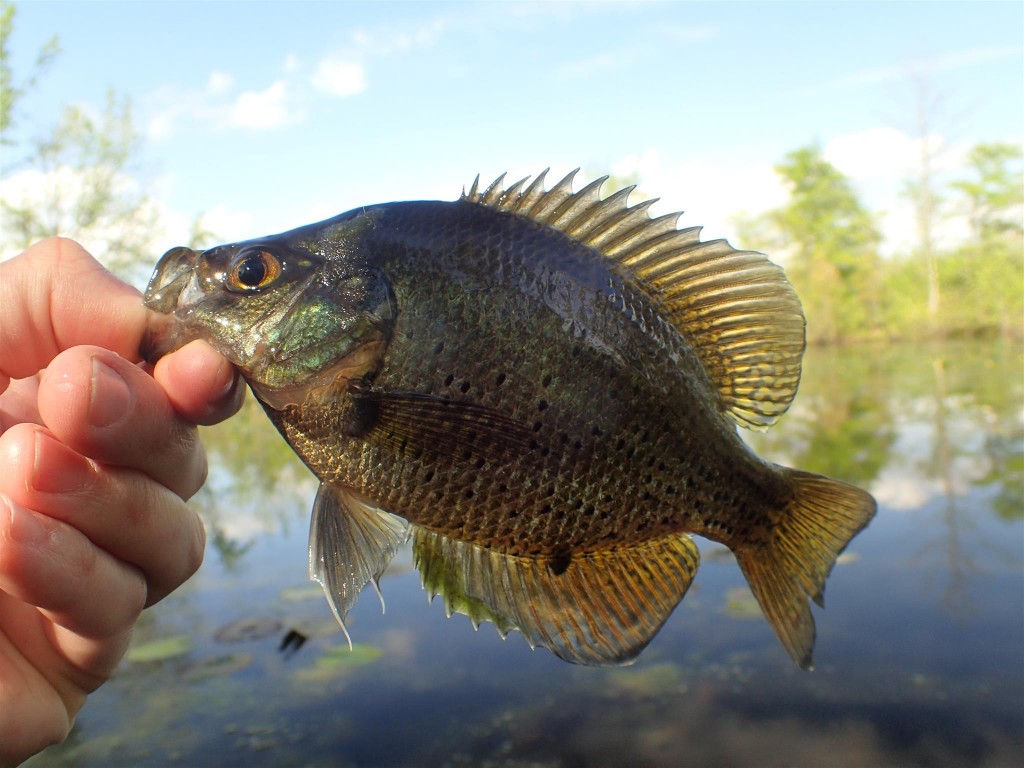 I went back to focusing on the shallows for mudminnow and had a long fish dart out from under a patch of algae to take my bait only to come off in the weeds.  It may have been a mudminnow, juvenile pickerel or bowfin, I wasn’t sure. 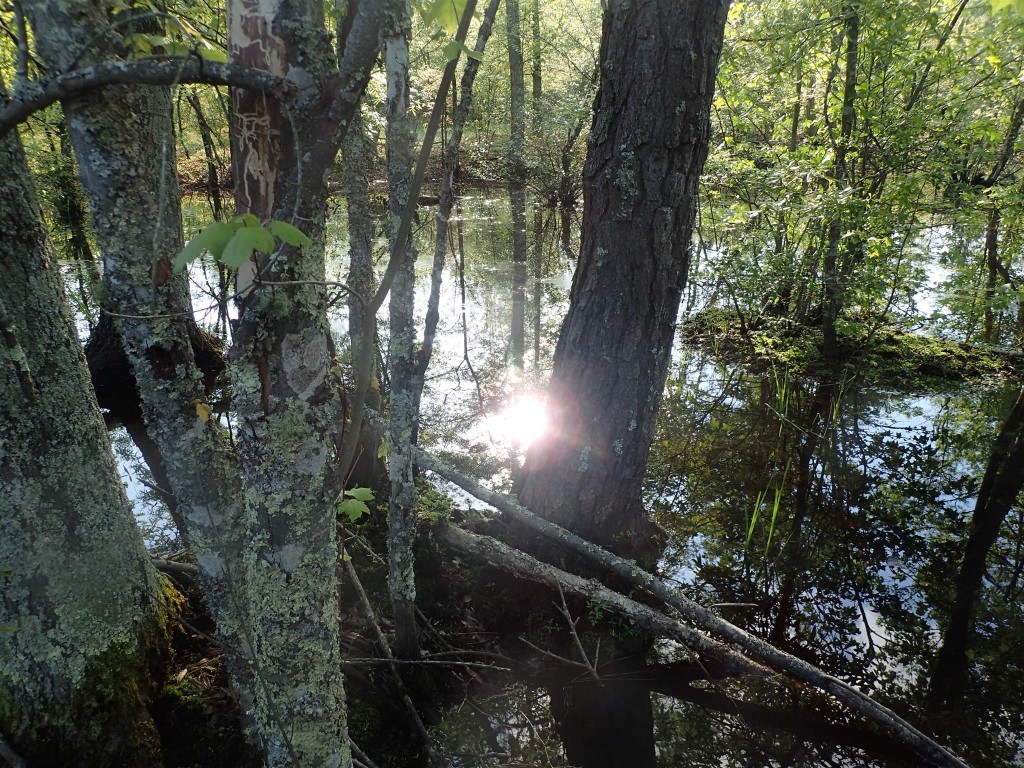 George hadn’t caught a flier yet so I advised him to try and replicate what I had done to catch one.  Just as it was time to go, George pulled through with his lifer flier! 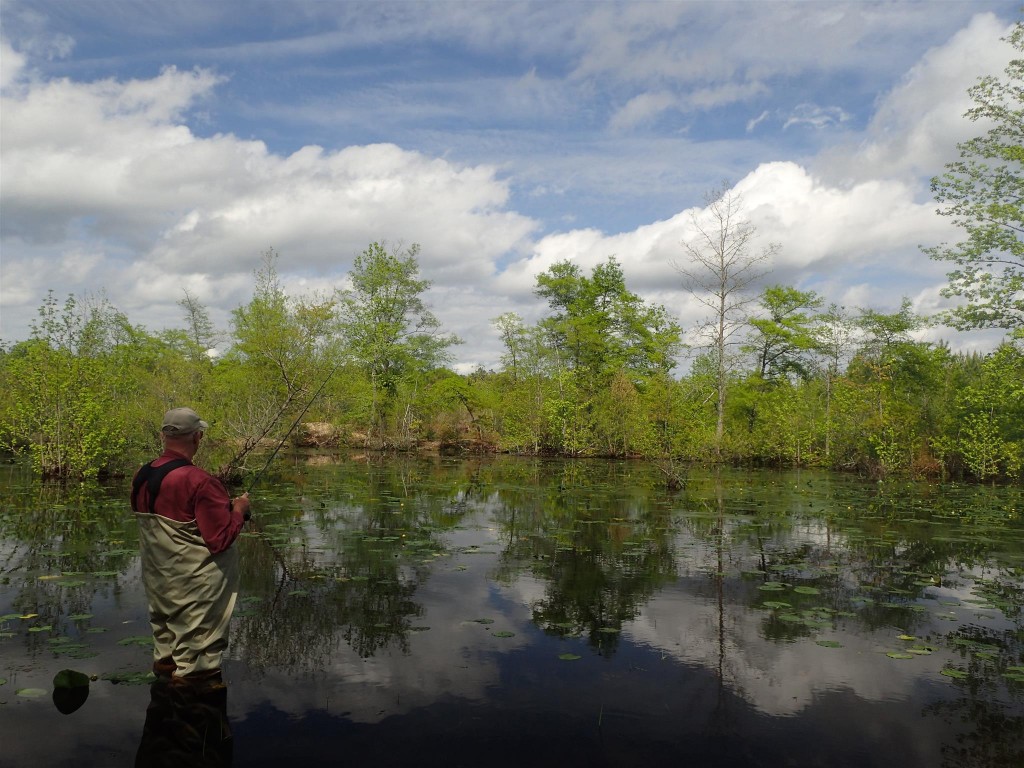 As we drove towards our motel, George and I debated meeting up with Pat and Ben again in the evening.  We ended up retreating to our motel, and you can imagine the look on my face when Pat texted me to inform us of the, not one, but two white catfish they had caught.  In Ben’s pursuit of striped bass, they had incidentally caught them!

George took note of the time of their catches relative to the tides.  We had a window of opportunity to try for them in the morning before departing for home.

2 thoughts on “Springtime in Virginia”