I headed out on Saturday with a single target in mind: longnose gar.  To aid me in my journey to another lifelist entry,  Ken had been generous enough to share both his technique and location with me.

I arrived with plans to do some wading, but then had a better idea. Upon arrival, I decided to take a walk around before getting suited up. Looking down from a bridge, I spotted a few carp, beautiful redhorse, and also a few gar sitting in the eddies. With slippery rocks and fast water, the river didn’t seem all that wader-friendly. I decided to fish from the bridge. Landing fish would be tough, having to hoist them up, but I had confidence in my plan.

I rigged up a minnow on two tandem treble hooks and simply drifted it in the current through the school of gar, just like I was steelheading. After a few drifts I had a gar snap at the minnow. I was on the right track. I then cut the minnow in half, and put half the minnow on one treble and half on the other. I figured the gar might prefer a smaller morsel for their thin snouts… and I was right. First drift I hooked into my first gar of the day.

I brought the gar in to the bridge piling and began hoisting him up, but after a few tugs the fish came off. I inspected my rig to find a bent treble hook… darn I would have to go up one hook size to avoid bending.

Soon after I was into my second gar, but once again the hook came out on the lift up to he bridge platform.

Third time’s a charm, and I finally had my lifer longnose gar in hand. 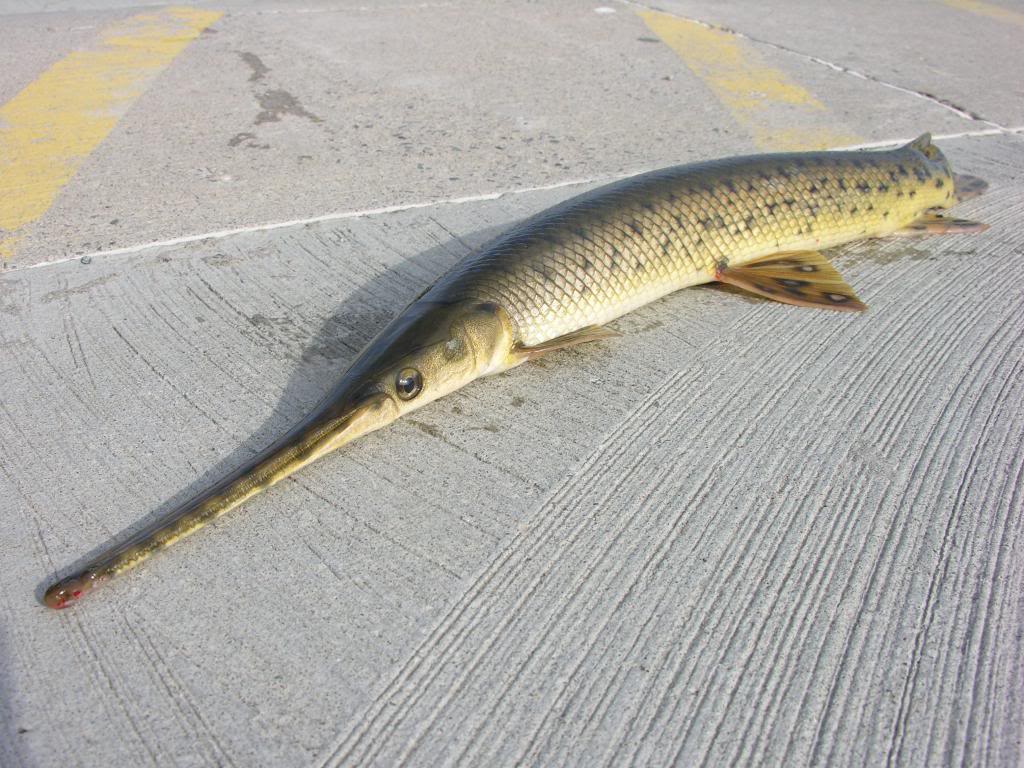 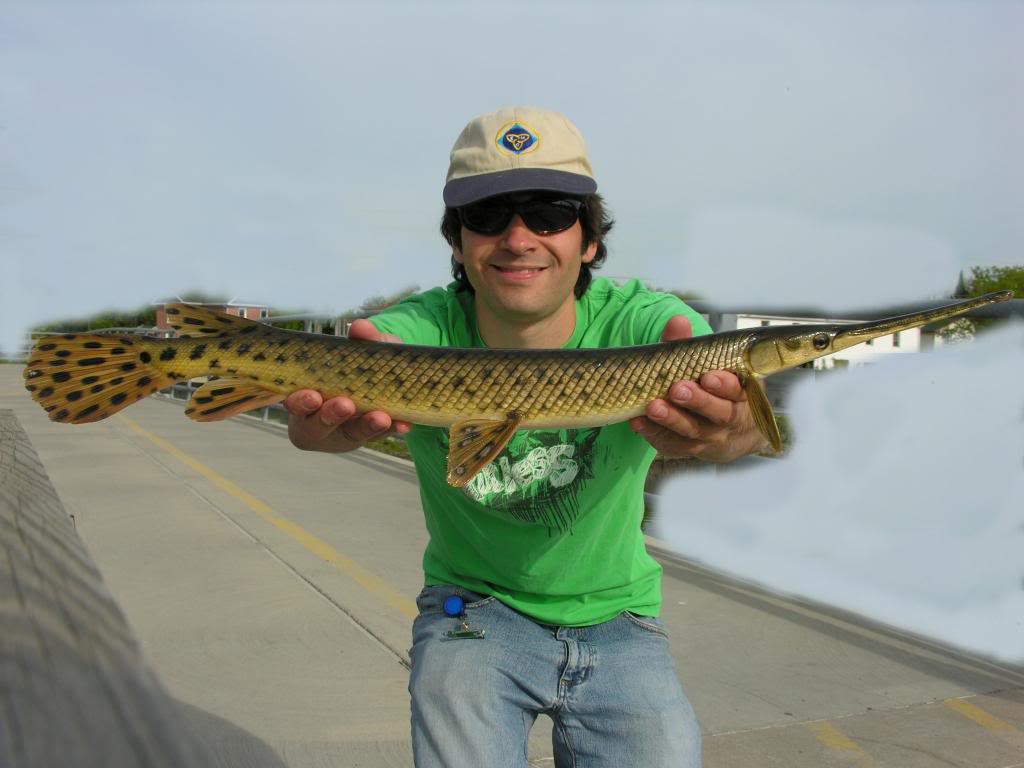 My fourth fish was a complete monster, I tried and tried lifting it, but the slippery braid kept cutting into my fingers and slipping away. I took off my shirt and tried using it for extra grip, but the fish was just too heavy. I decided to use the railing as leverage, but that was a mistake. Braid doesn’t do well under rubbing, and the railing was just rough enough to snap my braid as I tried pulling the fish up. Good lesson to learn, but a costly lesson. It cost me the big fish of the day.

I decided on an alternative landing plan. I put all my gear in my backpack so that I could quickly scoot the fish over to the far bank where I could grab it by hand. This plan worked for the next two fish. 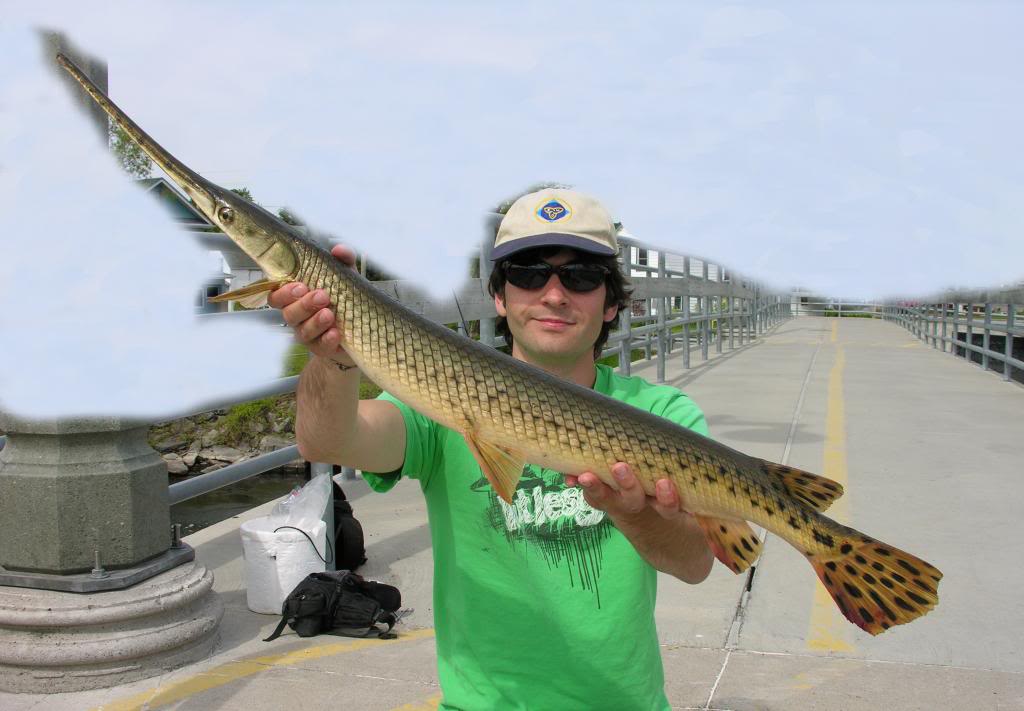 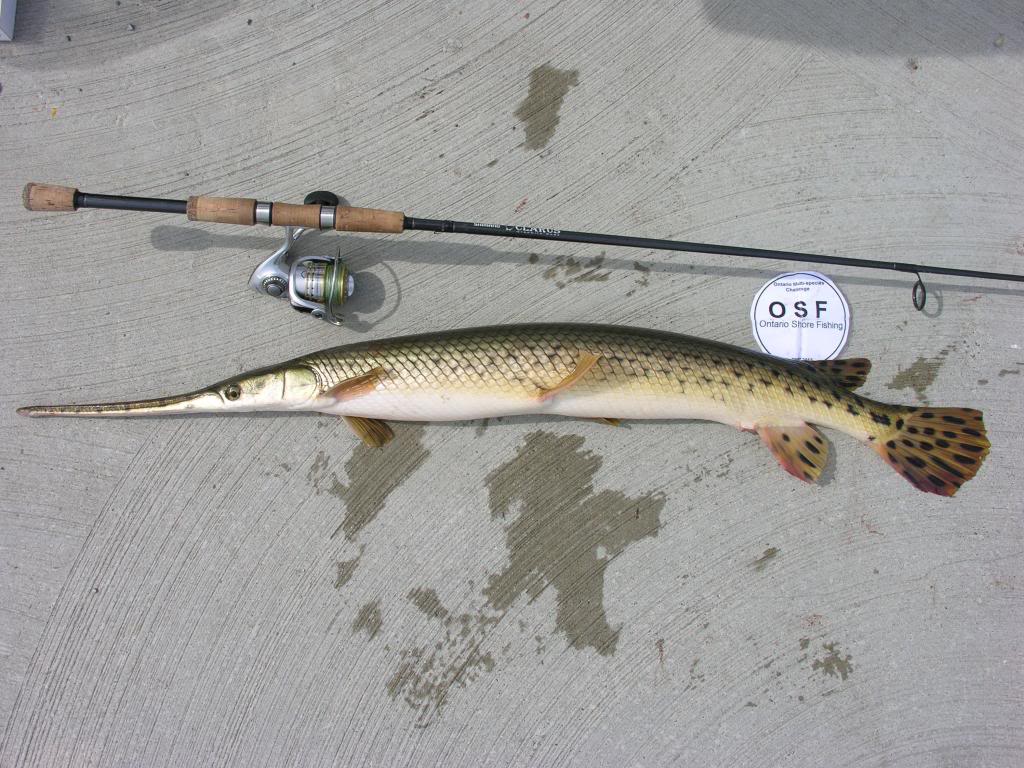 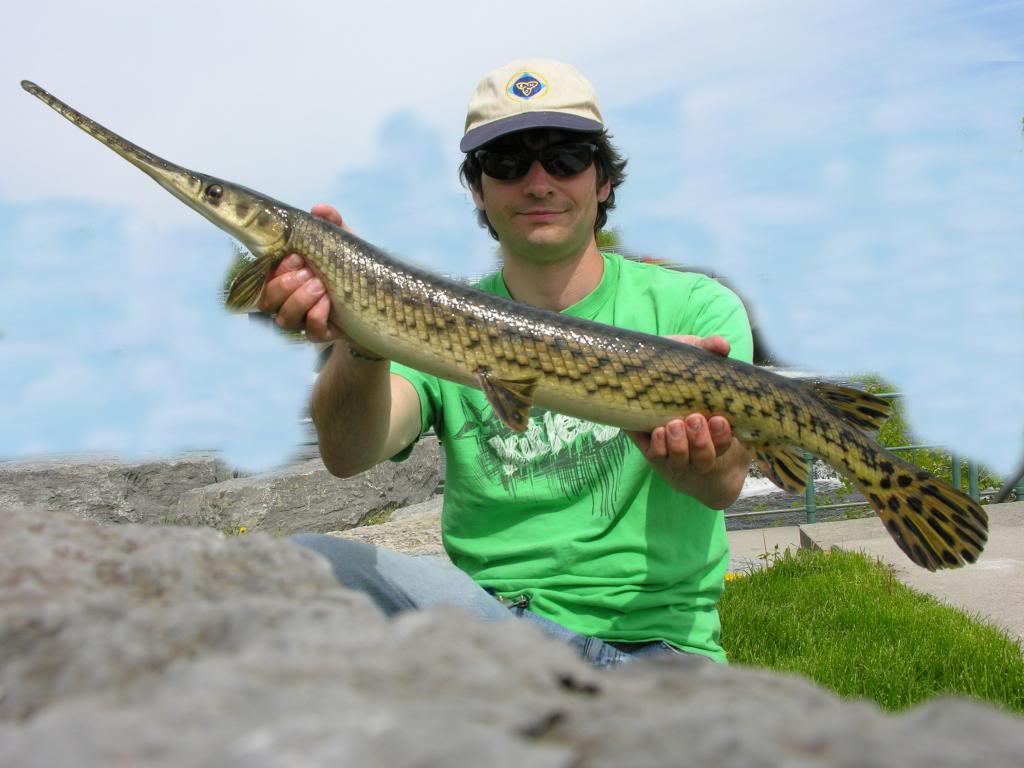 Then I had another monster-sized gar pick my bait up. I let him run and run and run, watching him the entire time… trying to decide if the hooks were placed well enough to set. I had previously watched a few fish drop the bait, so I didn’t want to wait too long. After a minute or two, I finally gave it a go, but the hooks did not set. Oh well… next time big guy!

Smaller treble hooks, the ones I had tied on originally, would provably have been more successful in tricking the gar to take the bait deeper into their snouts. I will have to look for sturdier small treble hooks for next time. 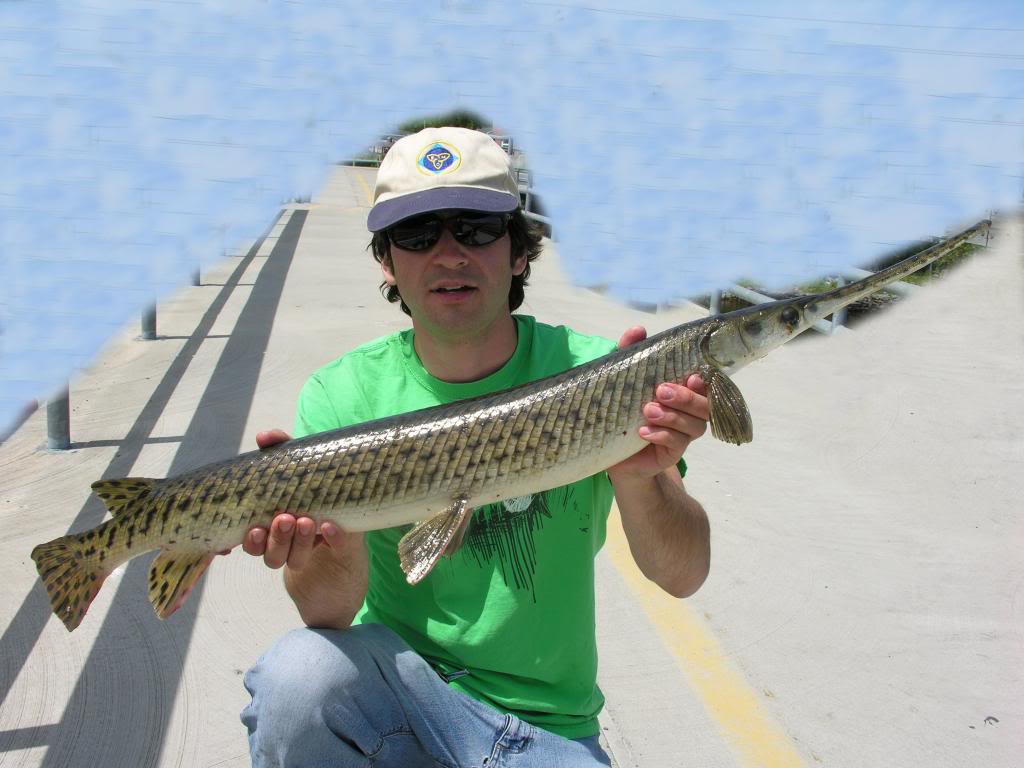 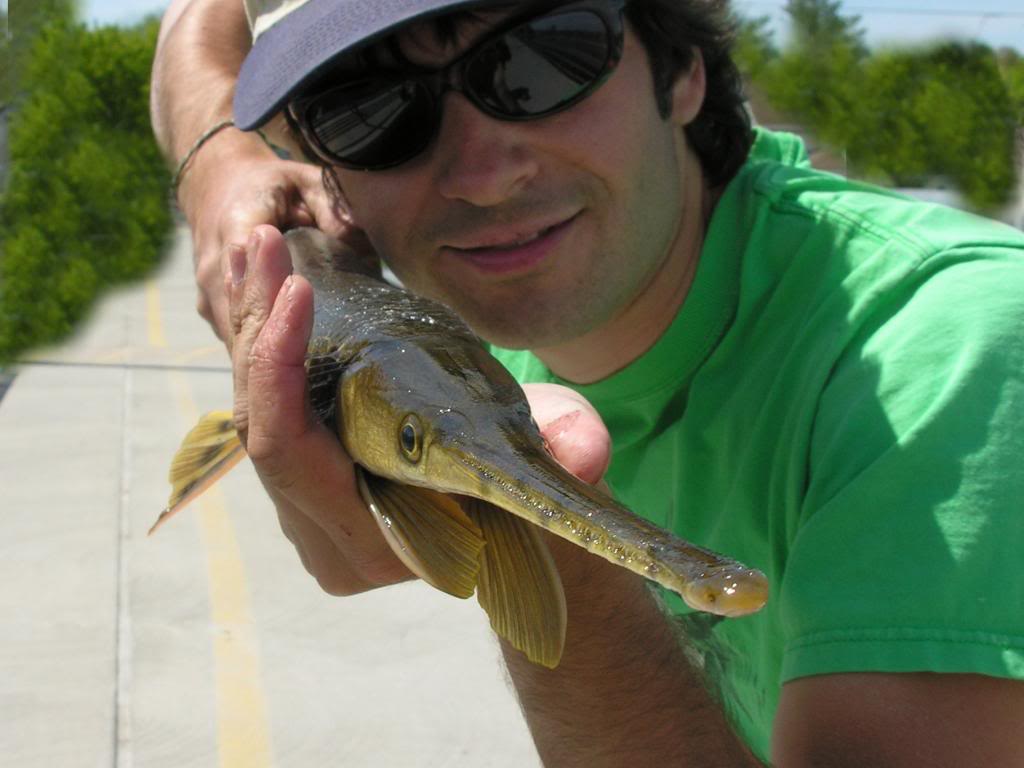 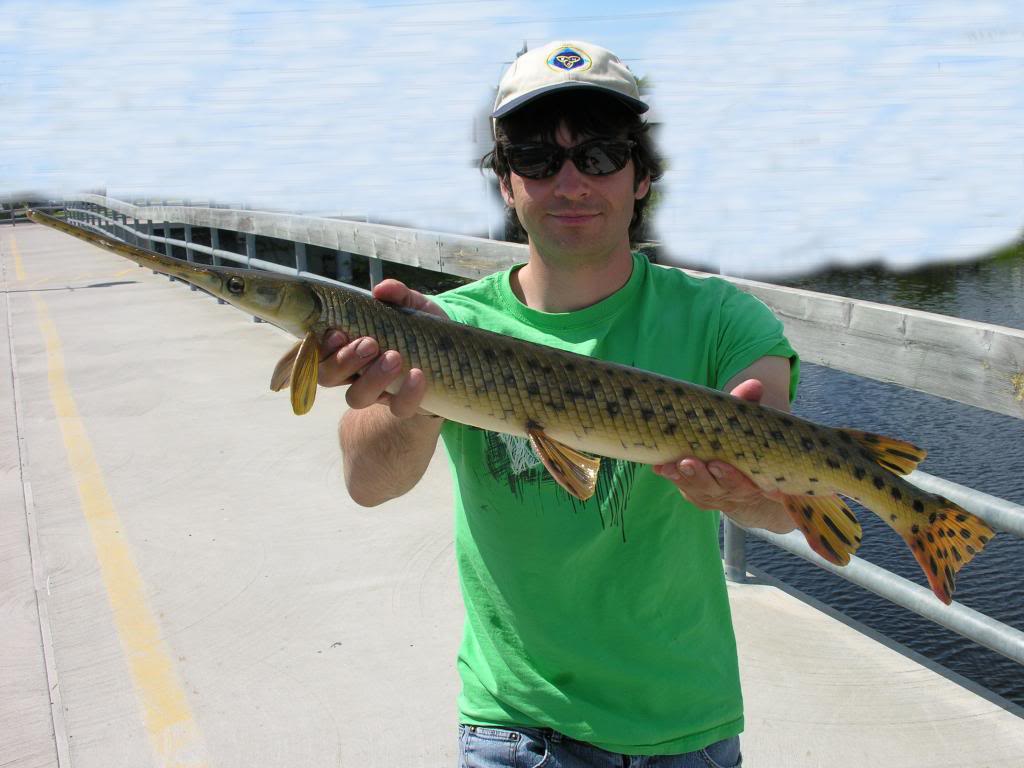 After I had run out of minnows I decided to try for carp, but they did well at swimming away from my line. I plunked the pilings for gorgeous, bright redhorse, but no takers.

On the way back to the car, I bottom-bounced a worm down the river and finally hooked up my lifer fallfish. 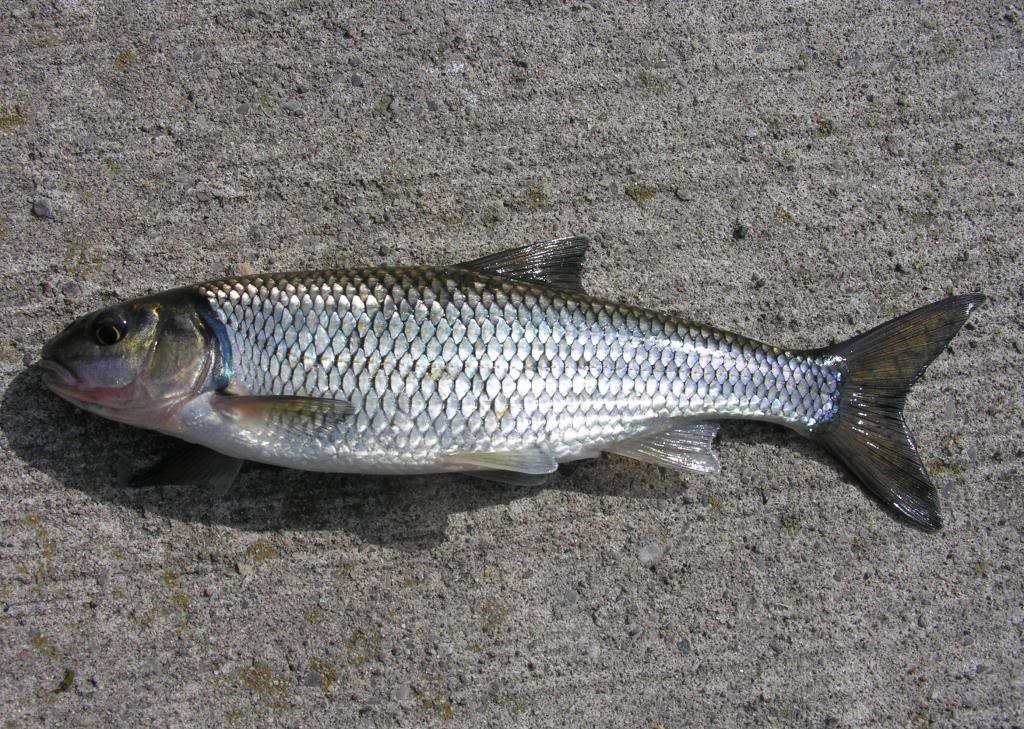