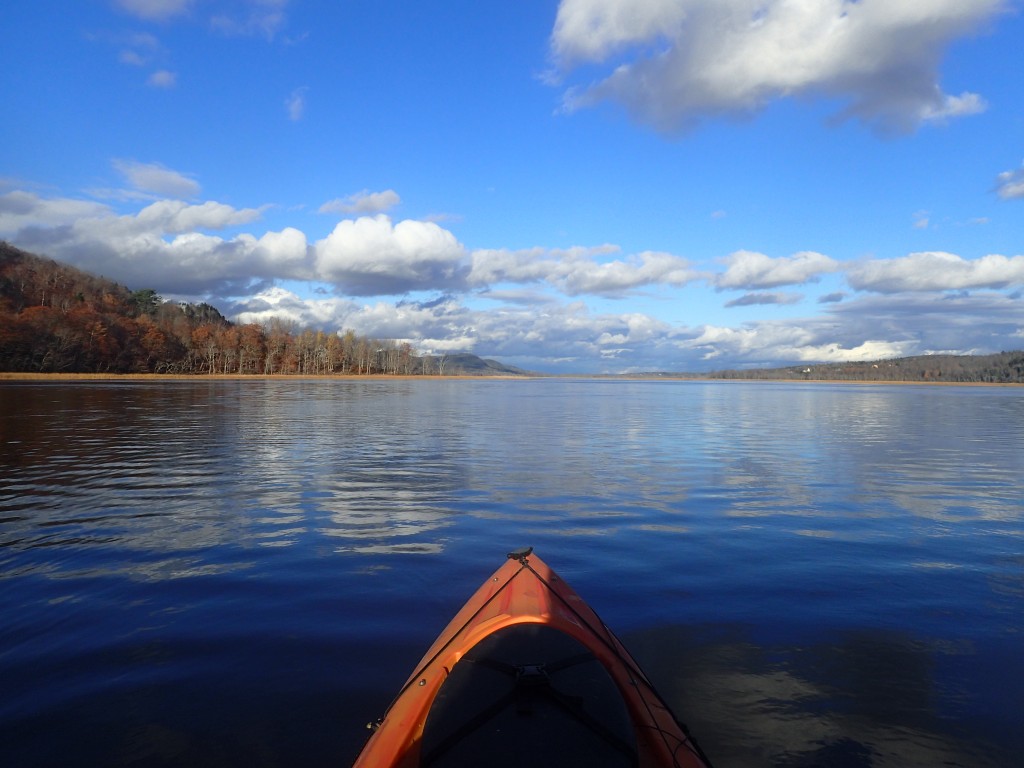 As I watched the view from the car window transition from narrow bustling city streets to the expansive basin of the tidal Saint Lawrence to the infinitely rolling hills of New Brunswick, I was left wondering if our day-long pilgrimage would be worth it in the end. 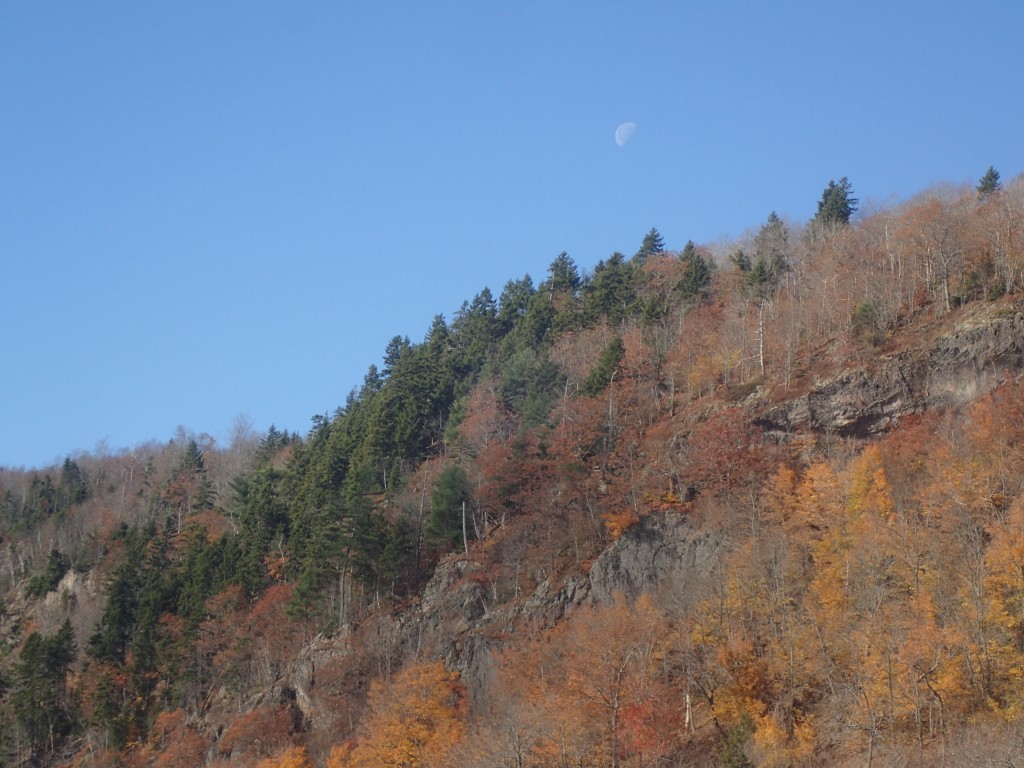 We were headed to the small town of Kingston, New Brunswick, to fish with Joe Tilley: an angler who has been delivering beautiful pictures of shortnose sturgeon to my Facebook news feed for the past year and a half. When my friend Eli had mentioned to me that he was in talks with Joe to organize two days of guided fishing, I knew we would be in good hands, but this is fishing after all and anything can happen. Fish can be on or off and conditions can be right or wrong.

The first day would be a rainy one. We paddled out and anchored up an intersection of two rivers. 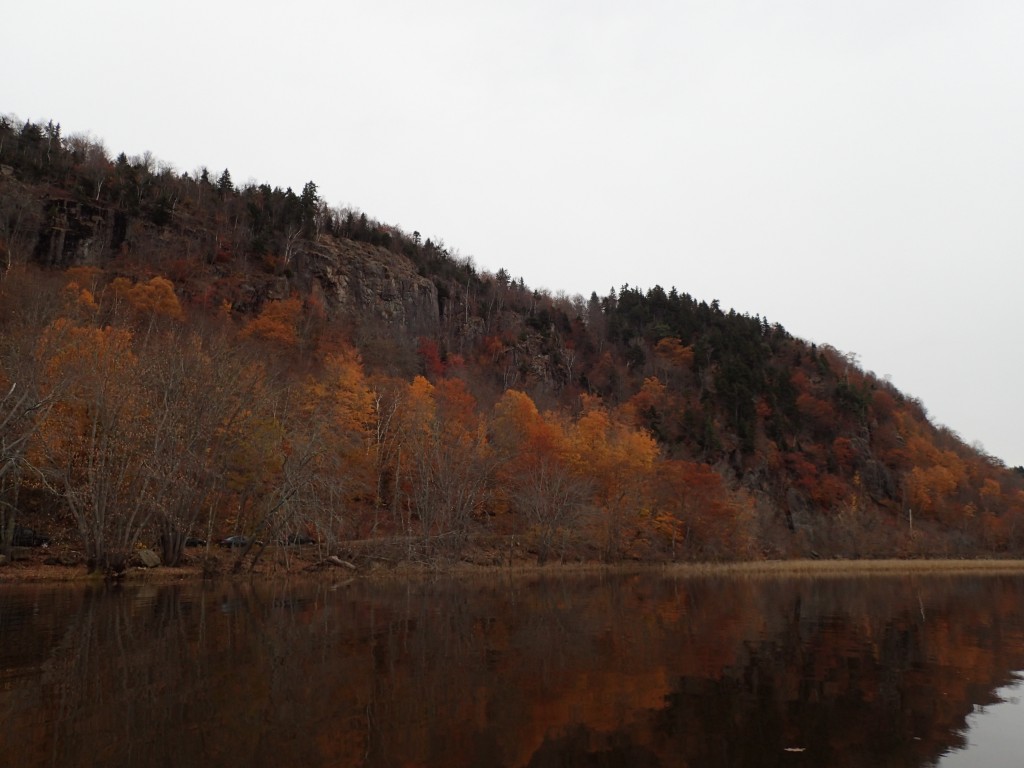 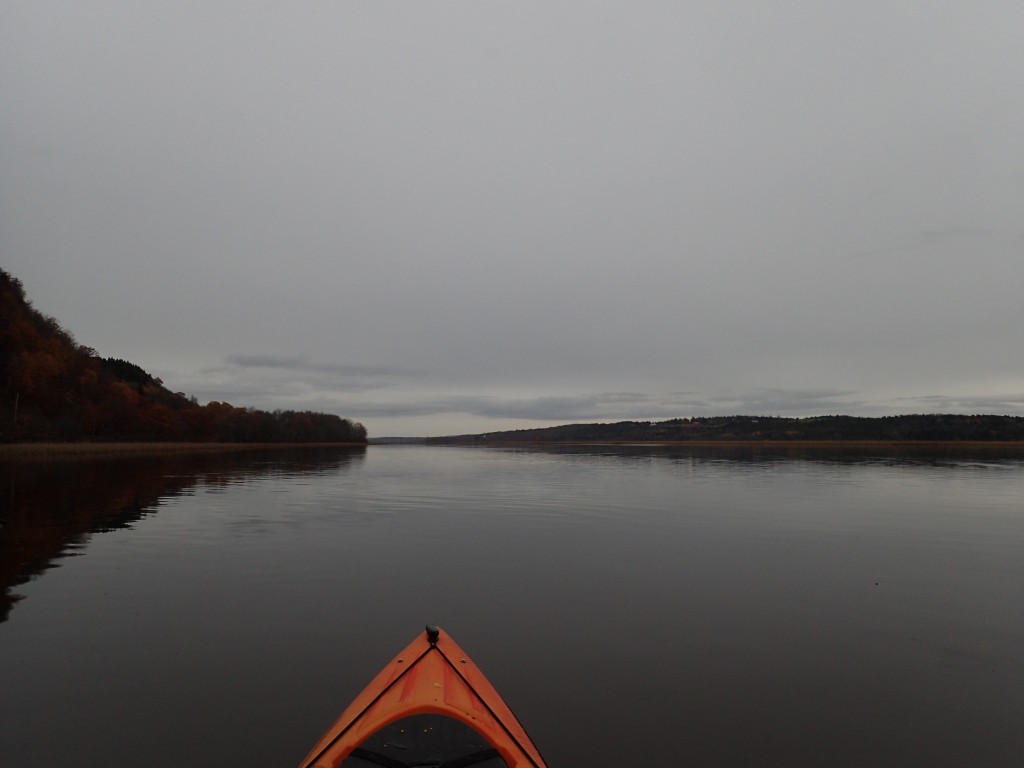 Joe instructed us to drop our lines down to the bottom and simply hold the rod steady in hand, feeling for any sort of tug. The first sign of life was a new species for my lifelist, the atlantic tomcod. 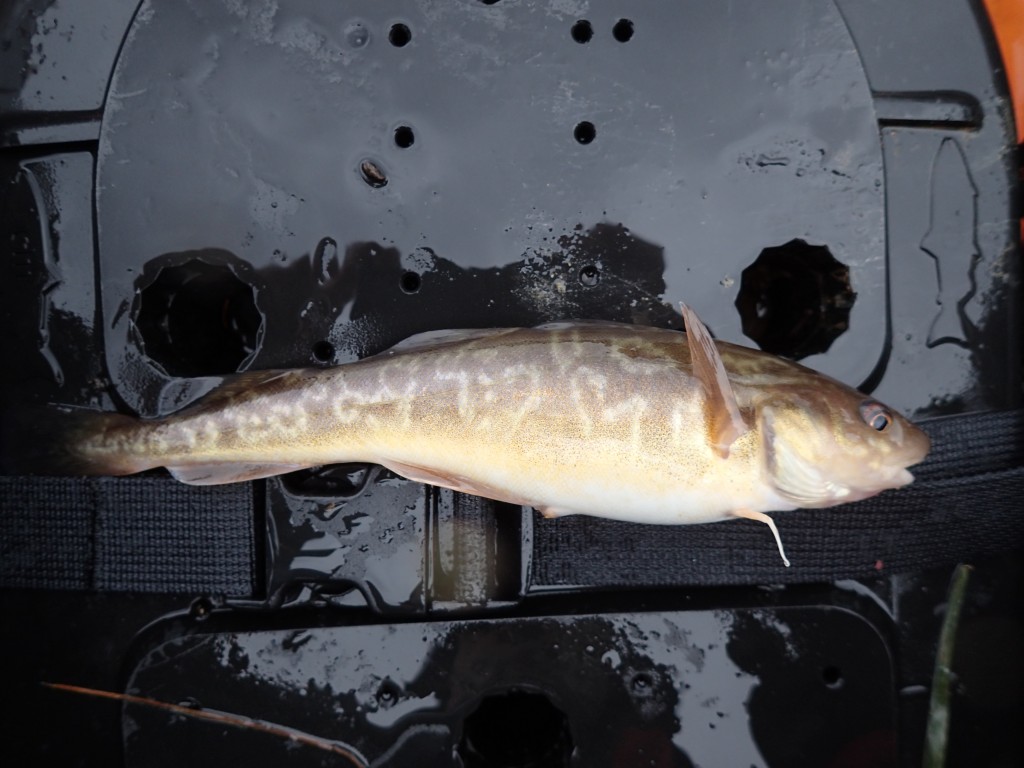 Usually when we try to target a particular species of fish, such as these Shortnose sturgeon, there are more aggressive fish to weed through. This trip, having bait stolen by tomcod after tomcod, was no exception.

Nevertheless, inside of two hours fishing time, Joe was the first to boat a small shortnose sturgeon. Shortly after, I brought one up to the surface but it appeared snagged and shook the hook. It was clear that we were floating over a pile of sturgeon. 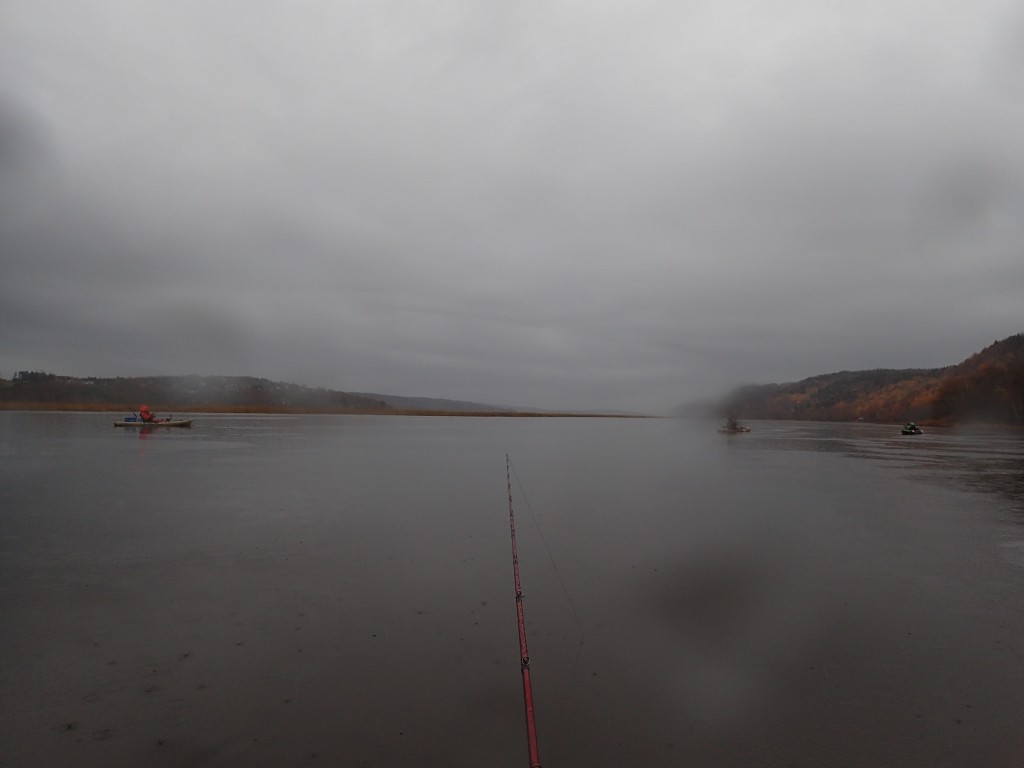 Finally, I felt the characteristic slow tug that Joe had described and lifted the rod slowly to hook something heavy. I lifted the fish to the surface where it rolled a bit in the swift current. Joe instructed me to grab the fish by the tail and pull it onto my lap. 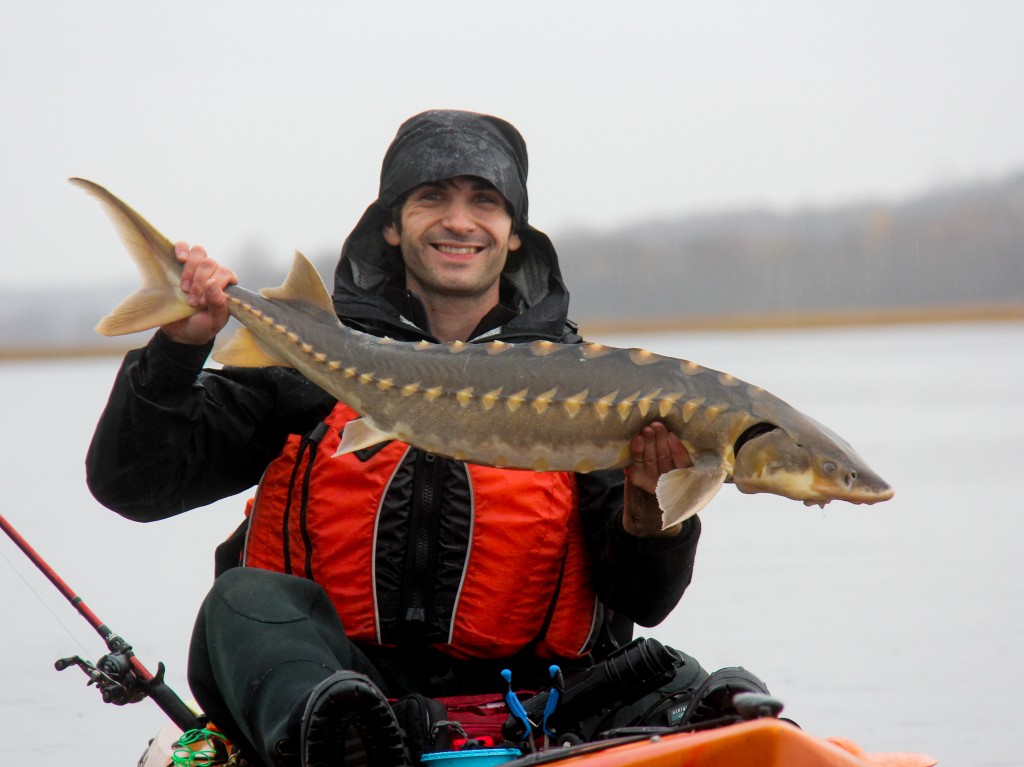 Within minutes of landing this fish, Ken landed an even bigger one! Eli was next and finally, after repositioning, George added a shortnose sturgeon to his lifelist as well. I learned that while being off the hotspot for the sturgeon, George had caught the elusive American eel for his lifelist. Good going George!

As the grey day rolled on, we had plenty of time to admire the rural New Brunswick scenery. Ken proceeded to put on a clinic, landing sturgeon after sturgeon as we floated around wondering what his secret was. 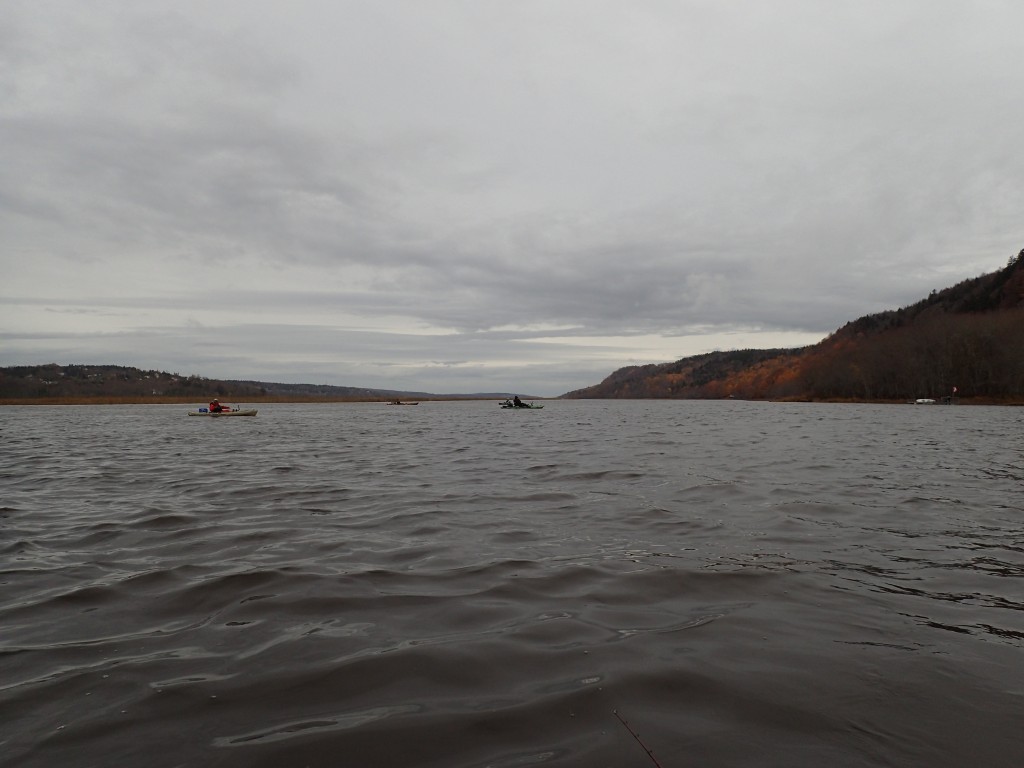 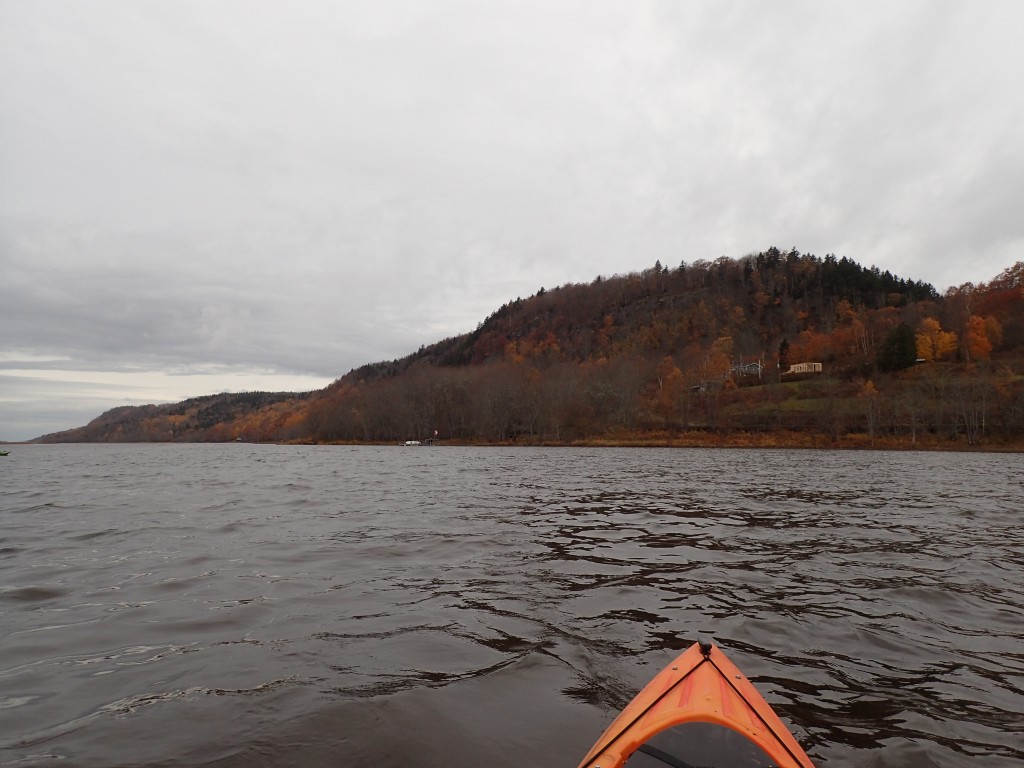 The rain and wind came and went and the sturgeon seemed to prefer the spouts of rain. Fishing was great for the next few hours and then slowed down as the tide slowed the flow of the river. At this point, our next lifelist targets were the rare juvenile Atlantic sturgeon that could mix in with the shortnose. With nothing much going on and the day being not very dry, we decided to head in.

The next day’s weather was perfect for us, but not so much for the fish. While the tomcod continued their endless assail on our baits, the sturgeon were much less willing to bite. 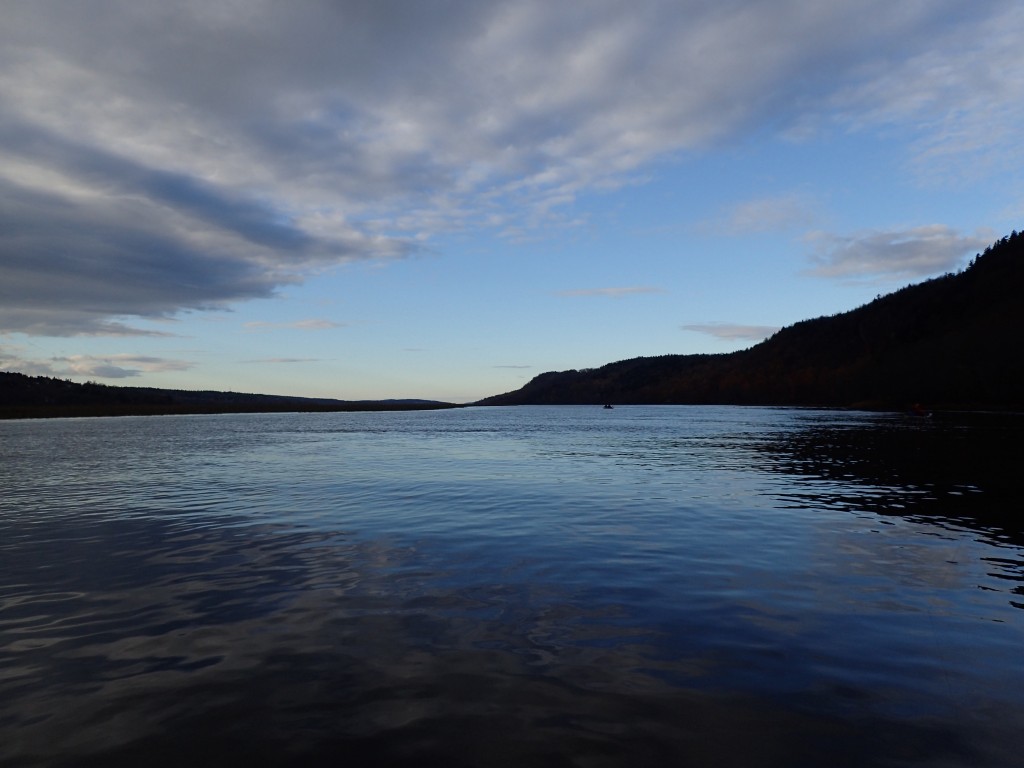 In hopes of connecting with a striped bass, I baited a second rod with one of the dead smelt Joe had brought us. 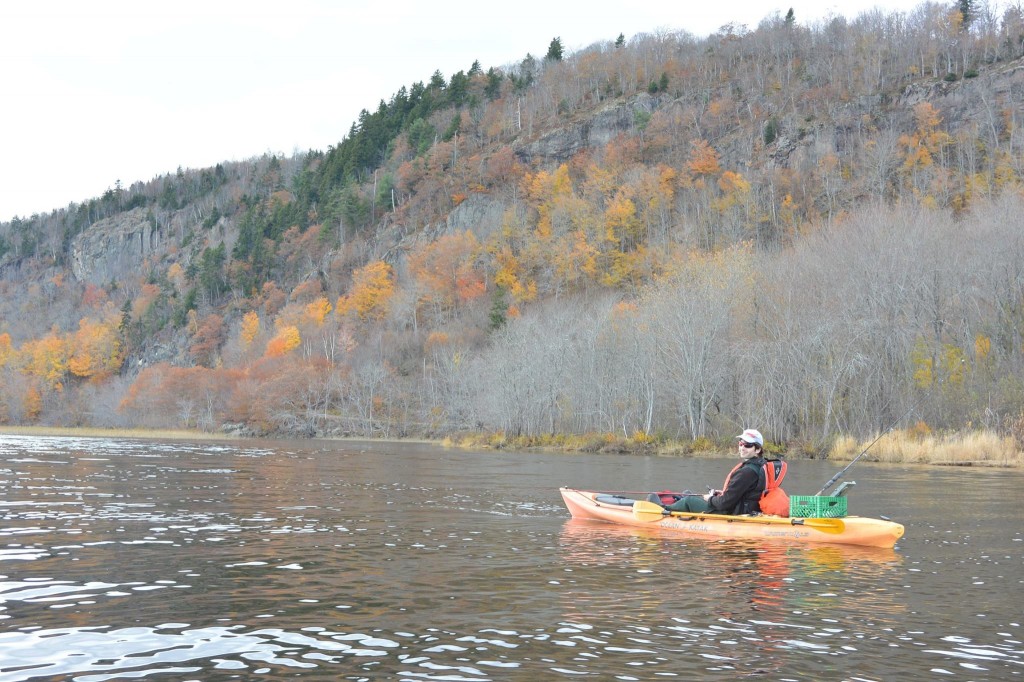 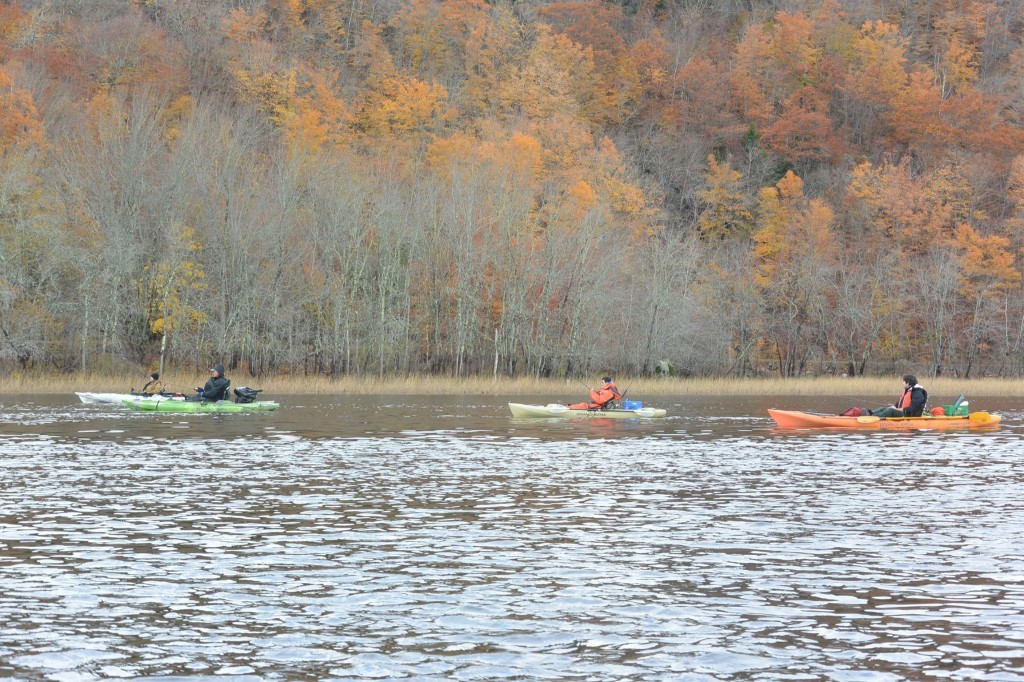 We had to move around quite a bit to find some willing fish. There didn’t seem to be any pattern as the river currents stopped and then reversed with the tide. I was lucky enough to boat one in the morning. 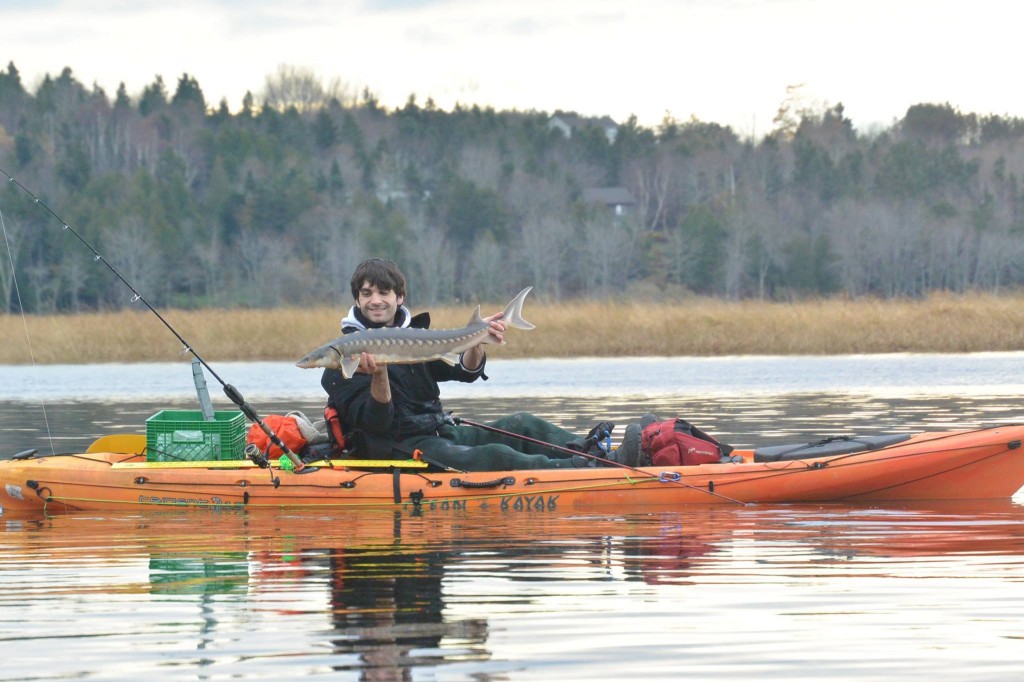 Joe advised me that there was a point with stronger current that might hold striped bass. I paddled over and after a lot of waiting, connected with a strong fish. With anticipation of a small striped bass, I carefully tried to lift the fish in the current. When the fish came into sight after a few minutes, it was another shortnose sturgeon. No striped bass for me, but I wasn’t disappointing by any means. 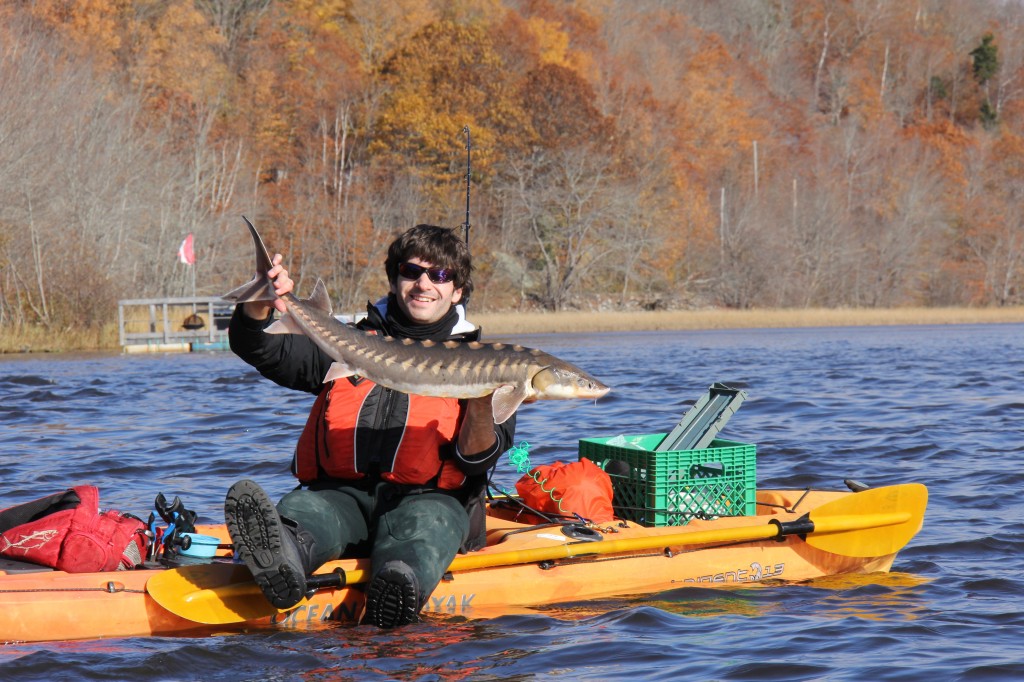 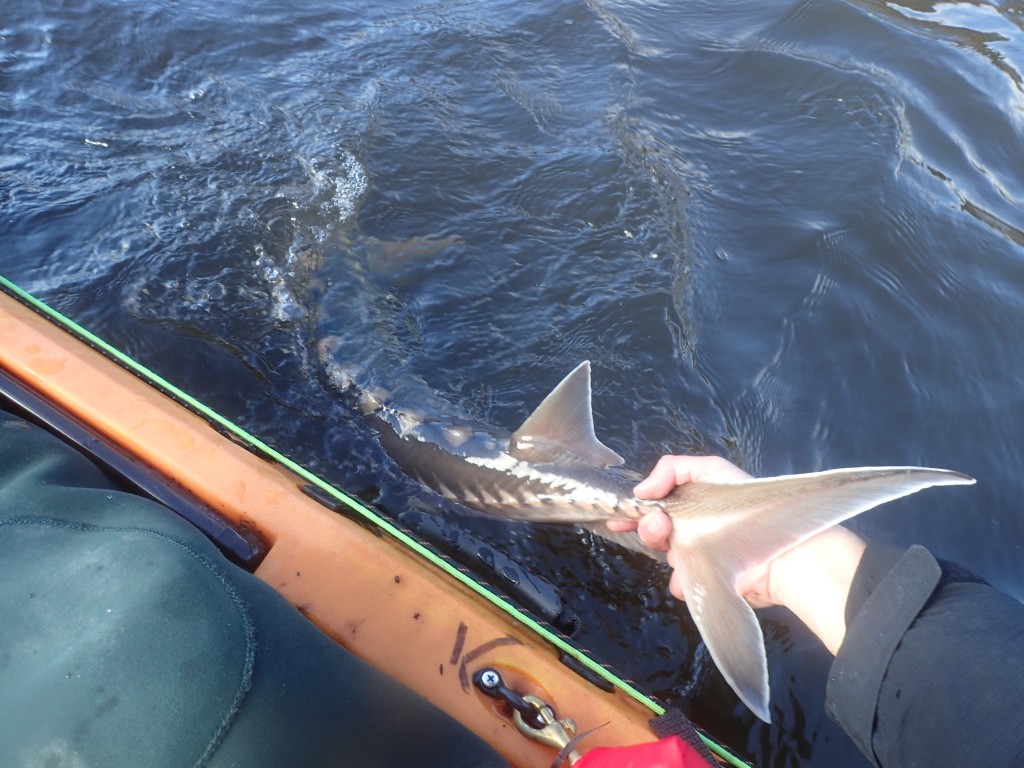 At this point, Ken and George headed off the water to start their long drive back to Toronto. Eli tried fishing from shore and Joe and I covered faster water by leapfrogging anchor positions. It was a slow grind today, but we caught a few more of these handsome fish before the day was done. 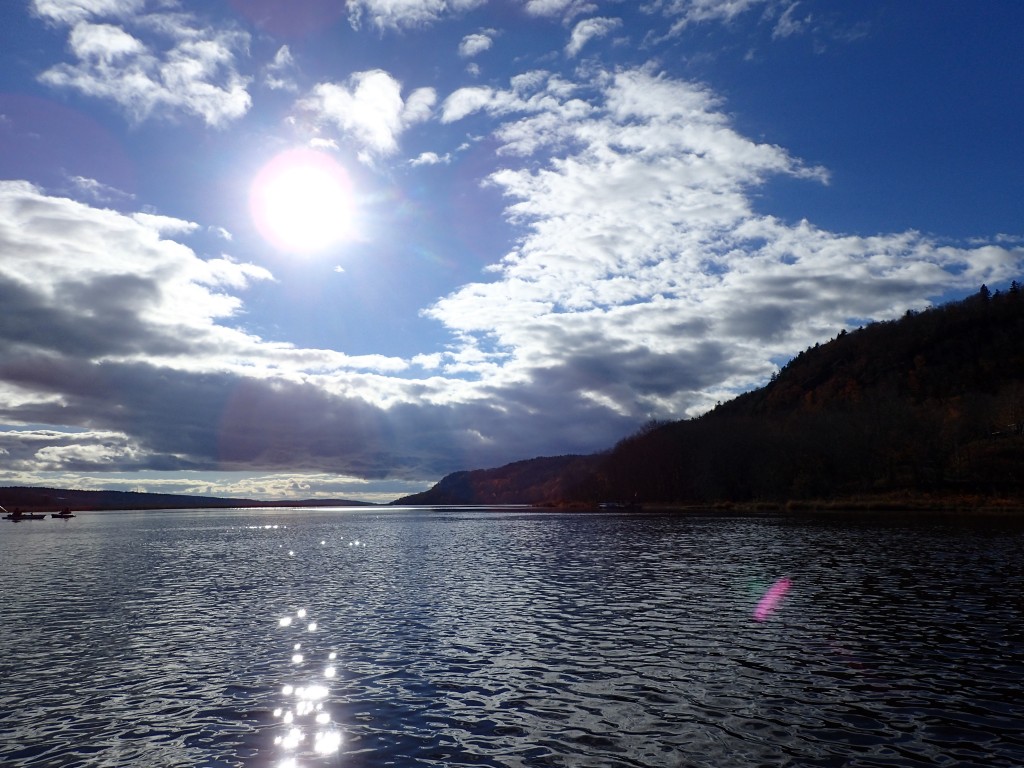 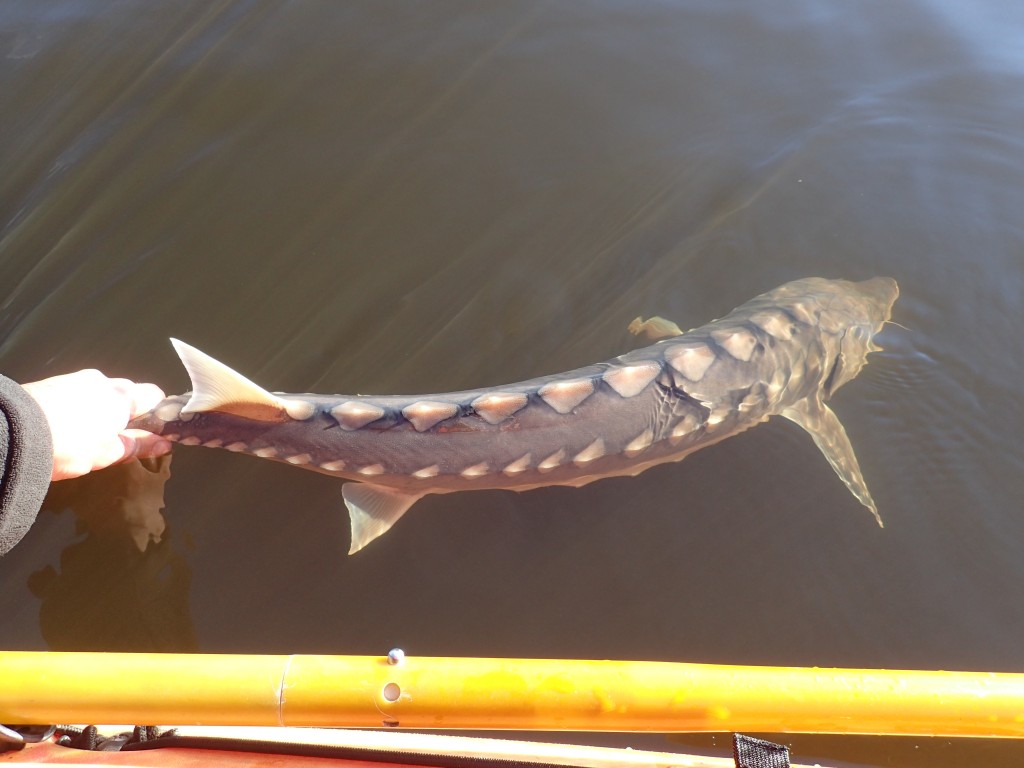 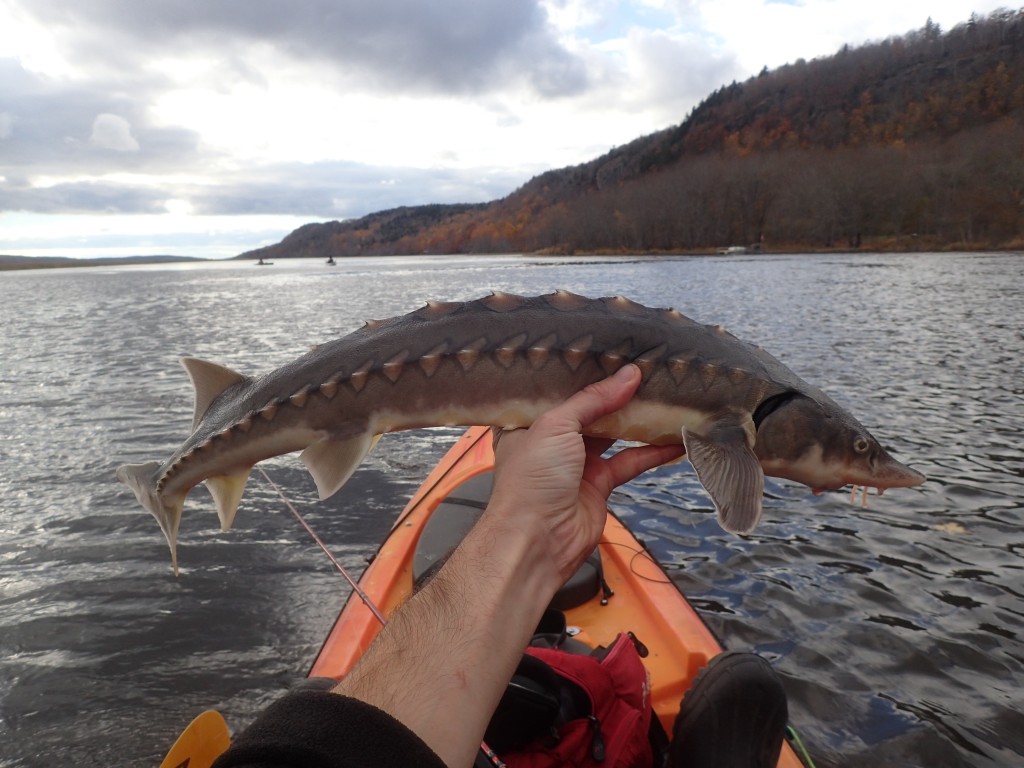 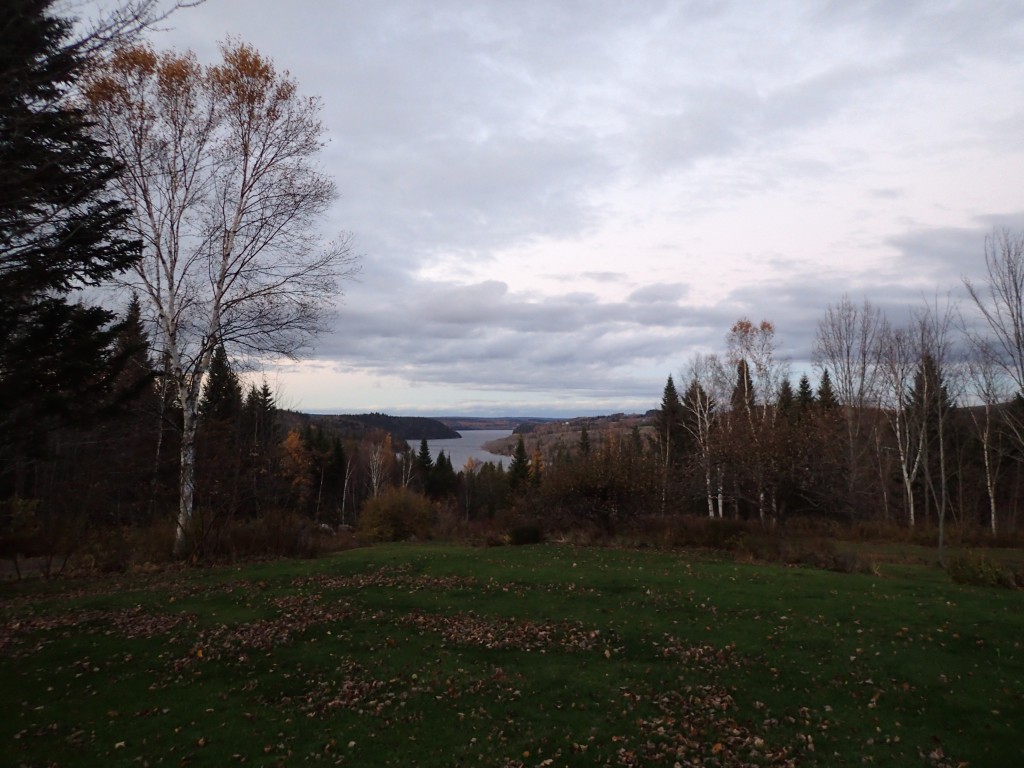